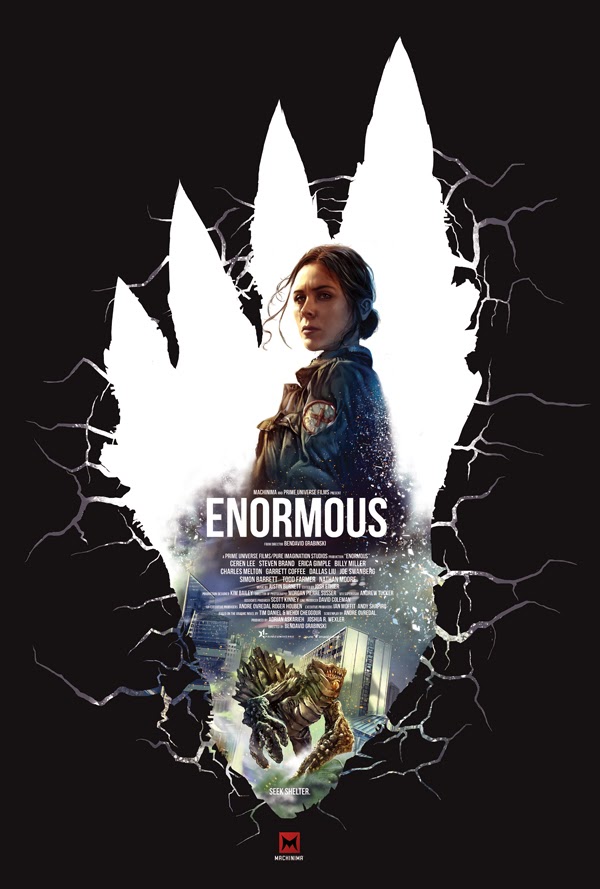 Based on the critically-acclaimed graphic novel written by Tim Daniel and drawn by Mehdi Cheggour, Enormous told the story of a post-apocalyptic world in which humans are now the bottom of the food chain and massive insect-like beasts take over the world.

Now, the creative minds of Director BenDavid Grabinski (short film Cost of Living), writer Andre Ovredal (Trollhunter) and Producer Adrian Askarieh (Hit Man, Agent 47) are taking Enormous from the page to the screen in an all-new live-action pilot that picks up years after E Day, the worldwide attack of massive insect like beasts, as the remaining humans from all walks of life must band together to survive and fight back against the monstrous invaders. Viewers are introduced to Ellen (Ceren Lee), a mother who has lost her child, and watch as she prepares to play a major role in the human resistance. The cast also includes Steve Braun (Wrong Turn 2), and Erica Gimpel (Veronica Mars).

After the jump FOG! chats with director BenDavid Grabinski.

FOG!: How did you get involved in adapting Enormous?

BenDavid Grabinski: I received a completely random phone call from Adrian Askariah around Halloween. He’d optioned the comic book and partnered with Machinima to make a web series based on it. He had big plans for tackling the property across multiple platforms and this was the first step. He’d been involved with the project for a long time before I came on board. There was a director who had been working on it before me but there were scheduling issues of some kind because of other obligations he had. Adrian had seen Cost of Living and felt like this was something I was right for.

It was a very exciting opportunity. They had a script I liked. The comic was cool. I loved the title. But the entire thing had to be finished by January 31st. It seemed basically impossible to get done in that amount of time but I’m really stupid and love a challenge so I decided to join the team.

I was impressed with the scale of the pilot; how did you work around your budgetary limitations to make it work?

I had a specific approach to the pilot and needed to find a group of people who were super talented and equally motivated to try and pull it off. I love wide shots. Classic controlled camera moves. Anamorphic lenses. I felt like it was really important to execute the pilot in a cinematic way.

I couldn’t have done it without Morgan Susser. He was my director of photography on Cost of Living and my right hand man. We’ve developed an amazing shorthand because we are visually very in sync. Everyone else from Cost of Living was already booked for other movies and TV shows during our time frame so our short prep time for Enormous was a mad dash to find really cool people who wouldn’t treat the pilot like it was some small endeavor. My costume designer was incredibly helpful. Alana Morshead is very good at her job. There are some other elements that added a lot like our opening titles and score.

My friend Charles de Lauzirika made this cool and twisted little indie Crave and the music and titles were both phenomenal. I just stole his guys for this. Raleigh Stewart and Justin Burnett did phenomenal work. But at the end of the day your project always lives or dies with casting. It’s 99% of it. We had a great casting director Matthew Lessall. He brought in so many people to read for every part and we found some awesome actors who were excited about the material.

You previously wrote and directed the short Cost of Living with Bret Harrison, Brandon Routh, and Mary Elizabeth Winstead. How did you attract these actors and is the short available for people to see?

I was meeting with actors and planning on doing auditions for Cost of Living when a few ridiculous things fell into my lap. Riley Stearns, whose first film Faults just premiered at SXSW, and his wife Mary Elizabeth Winstead are the nicest people and good friends of mine.

Mary agreed to play the computer because she could do it from home and the process would take an hour. That left the two lead guys who are in almost every frame of it. As I was going through the process Mary suggested Brandon for one of the leads. I thought he’d be amazing because I envisioned Silas as something like a lost Kurt Russell character in the John Carpenter universe. I never thought he’d do it but I figured it was worth a shot. She sent him the script and a nice e-mail and he inexplicably agreed to get lunch. I was only half awful during the meal so he agreed to do it.

I had a meeting with Adam Goldberg, the creator of The Goldbergs and Breaking In, and told him about the project. He suggested Bret Harrison and sent him the script. I assumed nothing would happen with that as well but he also wanted to do it.

Short Answer: I was very lucky. I’m very grateful to those guys for taking a chance on it. The short hasn’t been online for over a year but it’s now back on vimeo.

What are your favorite giant monster movies?

There are way too many. This isn’t an actual monster movie and it’s the most generic answer imaginable… but I love Jurassic Park so much. It’s a perfect movie. It’s something I could gladly rip off for the rest of my life. I had a few heroes in middle school and two near the top of the list were Michael Crichton and Spielberg so you couldn’t have a more perfect mix of elements. I also saw Pacific Rim six times in theaters last summer. I listened to that score on the way to set every day even though this pilot is drastically different in every way.

Hannibal is the best network drama in years and years and years. I have no clue why it’s not the most watched show on TV. I’m super obsessed with it. Community is back on top with the return of Dan Harmon and Enlisted is so funny and sweet.

Regarding comics, Saga is fucking amazing. I’m going back through Marvel Unlimited and checking out stuff I’ve missed and Gerry Duggan and Brian Posehn’s run on Deadpool is blowing my mind. The tone of Deadpool is very close to my own sensibilities and this is the best version of the character anyone has ever done.

Regarding movies, The LEGO Movie. Obviously. But Cheap Thrills is a pretty brilliant little indie film. Dark. Funny. Surprising. And completely part of the current zeitgeist. It’s going into limited release this week but it’s currently available on VOD.