My name is Elizabeth and I was a Love’s Baby Soft perfume wearer.

Born in the same year that the Love Cosmetics Company decided to create a line of adult beauty products intentionally made to smell like a baby, I was just one of thousands of young girls who spent their growing-up years spritzing on a product that would have made even the most sadistic of pedophiles feel dirty.

Now, while I might have remained innocent of Love’s marketing tactics (as I was too engrossed in The Muppet Show and The Electric Company to pay attention) you would have thought that at least one of my parents would have considered passing on a product that advertised itself like this: 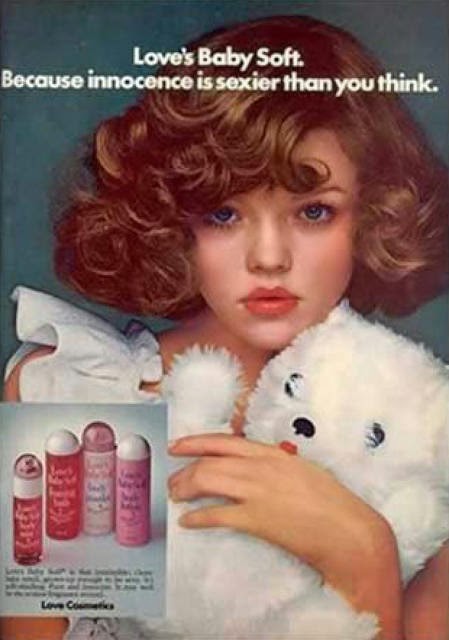 But no, each birthday and holiday was marked by at least one gift set of Love’s Baby Soft products that I would then apply to my skin in order to attract people drawn to the smell of an infant.

While I don’t personally remember anyone ever commenting on how “innocent” I smelled after a thorough dousing, I do recollect a lot of people asking if I was wearing diapers because I smelled similar to slightly soiled Pampers after the “Baby” portion of the Love’s faded away over time (to counteract this embarrassment I switched to Exclamation Point perfume by Coty when I was fourteen which was scented like odor-control cat litter…not a big improvement). In otherwords, it was the kind of smell that does not lead to the successful landing of a date for the sixth grade dance.

Eventually I grew out of Love’s tight sachet grip (and that horrible Exclamation Point) by my early 20s where I learned that soap, water, deodorant and a light misting of Ralph Lauren’s Romance was enough to get me through the day.

But the lingering effect of Baby Soft still remains coated to my skin some 30 plus years later, for whenever I smell baby powder or a newly cleaned infant, I remember how heavy the dildo-shaped bottle of Love’s felt in my hand and suddenly I am chilled to the bone with a corpulent sense of creepiness that will never go away.

In this article:1970s, Advertising/Marketing, Gross, Health and Beauty, Nostalgia, Watch This