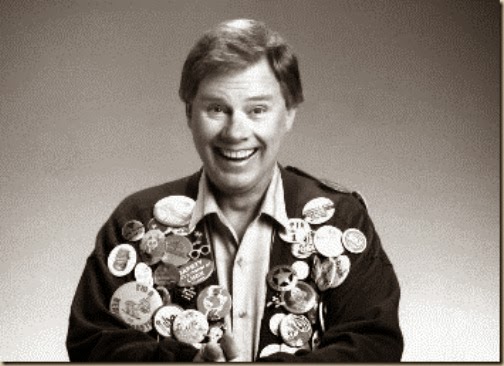 Once upon a time every major city in America seemed to have their own children’s television host who would supply the kiddos with a healthy dose of cartoons and cereal ads early in the morning (or afternoon depending on the programming director). And for the children who populated the northwest side of Oregon, our hero was a pin-clad guy named “Ramblin” Rod Anders who hosted The Ramblin Rod Show from 1964-1997.

Oh how we loved him.

For those of us lucky enough to find our way to his Portland studios (and yes, I was one of them), we got to sit on bleachers for hours while Ramblin Rod would ask us questions between filming audience participation scenes and Popeye cartoons, regaling our parents with jokes while still maintaining a kid-friendly attitude so that he wouldn’t taint our precious innocence with anything so awful as an off-color remark. The noise from his jangling collection of pins was music to the ears of all who were lucky enough to be around him…why it was as if it were a lullaby to childhood…and even though our asses ached from the hardness of the bleachers, we were all such good little boys and girls.

For those not so lucky to have parents or teachers with television connections, they were still entranced by Ramblin’ Rod’s strangely lulling voice and his Novocaine-like demeanor that led all through a series of Looney Tunes and Hanna-Barbera cartoons, preceded only by his regal arrival on a cardboard tug boat and the cheering of his adoring fans. 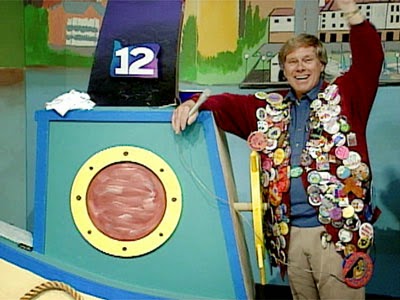 Of course, the best part of the show was the smile contest. Each and every child attending the show was filmed in a pan-and-scan motion (which was strangely hypnotic to watch and, unknowingly, to take part in from the comfort of your own home) in order to capture their wide gap-toothed face hole for prosperity.

The winners, chosen by someone random, won a case of Pop Shoppe Pop, the most delicious soda that was ever allowed to flow down your throat. It was a highly valued prize for someone so young and, according to my mother, far too expensive to buy for regular consumption.

Yes, back when childhood wasn’t monitored by helicopter parents, testing centers and prescription drugs for hyperactivity, kids were allowed to win huge boxes filled with cane sugar syrup water to quench their thirst without anyone threatening a law suit.

And the fact that the soda was akin to liquid gold, well that was better than winning all the money in the world . To hold a bottle of Pop Shoppe Pop was to declare to the other kids that you were far superior than the minions who drank the lesser stuff like RC Cola or Tab. In fact, it was not unheard of for a Smile Winner to reign supreme back at their school, doling out the precious bottles of soda to their special and closest of friends as if knighting them as members of the Pop Shoppe Pop roundtable.

But even with the Smile Winners glorious sense of superiority, there was no one more powerful than Ramblin Rod whose distinct dynamism was felt by those who watched him religiously (and didn’t have any viewing options other than five channels at that time), his influence noted by all. There were even rumors that Ramblin Rod was the inspiration for Krusty the Clown (seeing how Matt Groening grew up in Portland and no doubt saw the show) but later it seemed that the inspiration was more in tune with another Portland children’s TV host, Rusty Nails, whose show ran from the 50s to the wee early 70s. 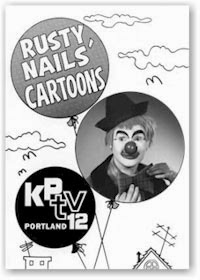 But that knowledge didn’t stop any of us from believing that the rumors were true even after we had grown up and replenished the Pacific Northwest with hellspawn of our own.

It just seemed to fit with how important Ramblin Rod was to all of us.

Ramblin Rod Anders died in 2002 after suffering from a stroke but his legacy still lives on in the guise of a shrine located at the Fizz Soda and Candy Shop in downtown Portland.

A fitting place for a man who made a bunch of young children desire various flavors of expensive soda and smile at six in the morning.