Two days after the release date in 2012, I completed Halo 4.

As is the case with most Halo titles, the campaign felt a little short but I still enjoyed it and I played as much multiplayer as I could (including Spartan Ops – which by the way, I love).

I raved to everyone about how amazing the game was and no surprise, being the fan girl that I am, I recommended it to everyone.

So two years on, after some reflection upon going back to it (because, on my lowly wage I still can’t afford a next-gen console, leaving me no option but to replay games *sob*), I had a stark realisation about the way women are represented in the game. It struck me that there are only two representations of female characters in the Halo franchise and neither of them were positive; 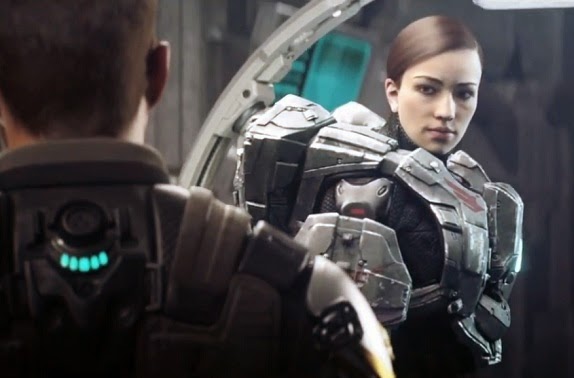 2. The weak, vulnerable Cortana who becomes mentally unstable and borderline crazy and Dr. Halsey who is also unstable and seen as dangerous, using her knowledge as a weapon in order to satisfy her need for revenge over the UNSC. 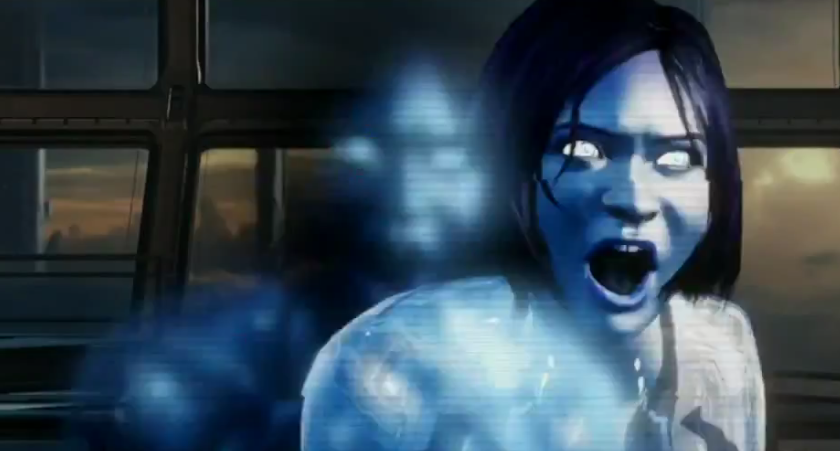 While I appreciate that Cortana is meant to be vulnerable and severely damaged in Halo 4, that coupled with emphasising her rather curvy blue body and making her more… well… booby, sort of undermined her a bit more than I, in hindsight am comfortable with.
Some of the cut scenes felt as if I shouldn’t be looking at her because although she’s an AI, empirically she looks exactly like a hot, naked, crying, blue woman who is in a really bad place. It felt voyeuristic in places and some of the camera angles were out right pervy.
In the previous games I didn’t remember her being so sexual. Her reliance on Chief made her appear like a needy ex-girlfriend. Again, I just wasn’t comfortable with that. 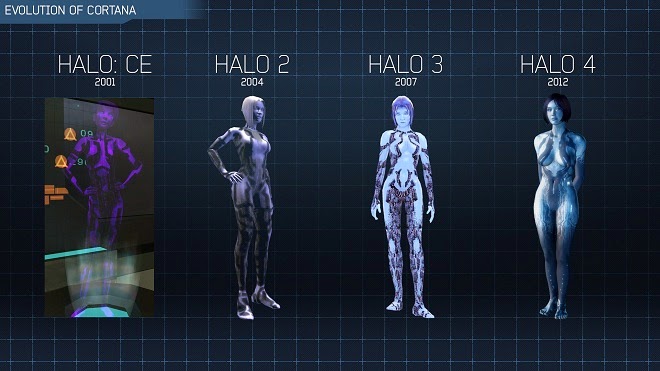 Having discussed this with some of my male friends who had played the game, they expressed similar views. Many of them feeling guilty for appreciating her form, especially as she was vulnerable. Most of them, while acknowledging it, eventually shrugged it off and put it down to the story.
However, I can’t see how making the player feel uncomfortable aided the story in any way. For me, it had the opposite effect, it took me out of the story and I was left feeling that Cortana was there to emphasise how awesome Master Chief is – when we already know that. 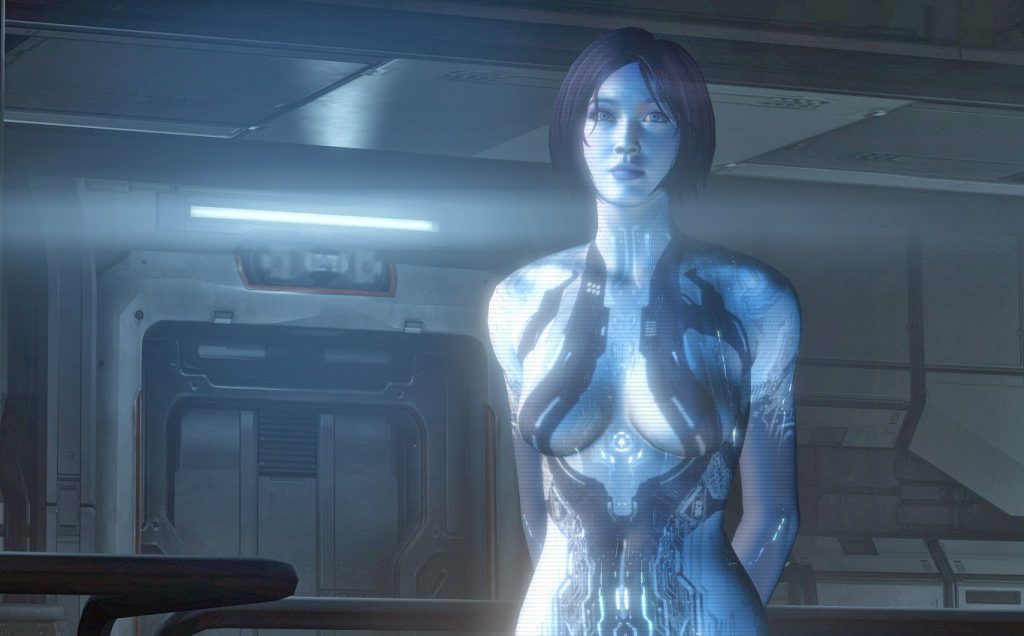 Sobbing blue AI’s aside, there’s also Palmer. While most of Palmer’s bitchiness seemed to be directed at one of the sexist moron Spartans (who, by the way has some terrible lines – disappointing scripting there) her anger felt a very forced and over-compensated. I appreciate that she is in a military position which requires her to keep the other Spartans in line, however her attitude was clichéd and as such, didn’t seem believable.
For a woman to be strong (as with a man for that matter), it doesn’t necessarily mean they have to be angry or shout a lot, it frustrates me that most strong female characters in games, film and TV are strong simply because they’ve endured abuse or had to overcome obstacles.
Very rarely do you see a female protagonist saving a man that she’s not romantically involved with, the motivation for a woman to find her strength and overcome suffering is almost always for a man. On the rare occasions that this is not the case, a female character’s ability to overcome hardship or make it through dangerous situations is aided by the actions of a male character.
Even in Alfonso Cuarón’s visual masterpiece, Gravity though the film can be interpreted various ways, Sandra Bullock only made it out alive because her subconscious caused her to hallucinate a dead George Clooney to help her survive.
As for Dr. Halsey, she might be intelligent, know more about alien technology than anyone else and have the title of doctor in front of her name but at her core, she’s been damaged by the guilt of her actions and chose to defect to the enemy as a form of revenge, she is portrayed as an intelligent woman who has lost her ability to think rationally. True, there exist multiple examples of male characters who are crazy, Albert Wesker is a great example, he believes he is right and is doing good, much like Halsey – the classic evil genius trope – yet he is more crazed than crazy.
By comparison, Halsey is volatile and doesn’t get to wear shades indoors or have cool bleached hair. She is portrayed as unstable and focused solely on revenge on the UNSC. I’m not saying if she had Wesker-style shades and a fancy hairdo that it’d fix things. It would help to make her character that bit more relatable, giving her a modicum of personality for players to relate to. If a male bad guy like Wesker who in one of the Resident Evil games even turned into a deformed, squid like monster and managed to retain some likeable qualities as character, then why not Halsey? 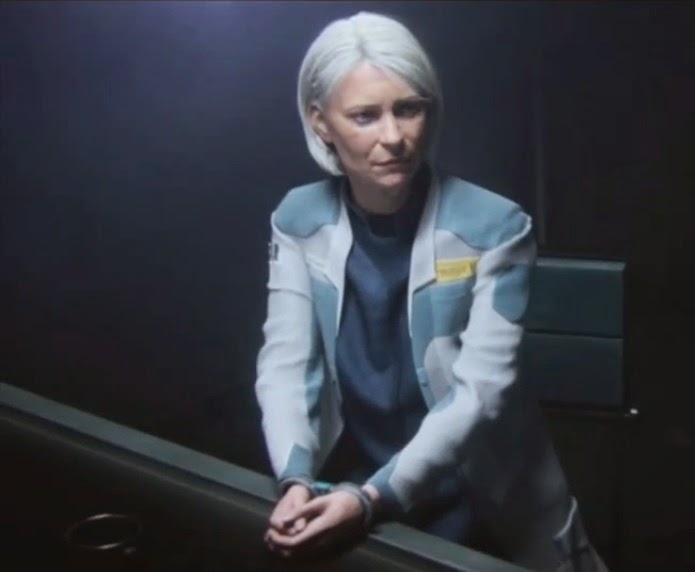 Let me make one thing absolutely clear, I’m not attacking Halo 4 or 343 Industries, because anyone that reads my blog knows I love the face off of Halo; I’m just raising something that surprised me and I needed to get off my chest.
Halo is a franchise that welcomes everyone.

The CEO of 343 Industries is a woman, Kiki Wolfkill (one hell of a name!), so I sort of expected the women in it to be represented in a non-clichéd manner, thus I was mightily disappointed when the females fit into the limited categories of ‘bitch’, ‘crazy’ or ‘bitch be crazy’. Ultimately, it feels as though the writers have been taking tips from the Michael Bay universe and that is something I can’t let go lightly.

Perhaps I’m forgetting about Forward Unto Dawn, if you haven’t seen this mini series, even if you’re a not a Halo fan I urge you to check it out (I think it’s on Netflix at the moment!) because the women in this phenomenal web series were represented in a totally fair manner and seemed believable for once so *here comes the spoiler* I was so very disappointed when both Orenski and Silva were killed off.
Wouldn’t it have been nice for one of them to have lived, making it into the games story like Lasky?
There are only a few positive female role models in games (Samus Aran, Jade from Beyond Good and Evil spring to mind) and I’d like to hope more will crop up in the games industry soon that aren’t walking stereotypes – in fact, the same goes for male characters, let’s quit with the whole brave anti-hero who always wins and gets the girl. Oh, and the token weak science based characters, scientists aren’t all dithering and fearful, look at Gordon Freeman from the Half-Life series, he’s smart but also knows how to wield a crowbar.
Incidentally, that’s another thing that bothered me playing Halo 4, calling every scientist in the game an “Egghead” is not big and certainly not clever. Though, I fear my dislike of that term comes from being bullied in my own childhood for being good at science.
I suppose the main crux of this rant is that I’m craving something more in my gaming characters. People are complicated bundles of experience, opinion and life choices – we’re not so easily categorised into stereotypes as film, TV and games suggest. I just want to see some real, believable characters in my games and I know a lot of you feel the same way too.