Everybody knows the classic Godzilla films produced by Toho Studios, the premier production and distribution company in Japanese film history.  Toho made other genre pictures too, such as samurai epics directed by Kurosawa or anime epics like Akira.

I thought it would be fun to list ten Toho sci-fi and fantasy pictures that don’t feature the studio’s famous kaiju even though they were produced during the classic kaiju era. Several of these underdog pictures rival or even surpass any of the Godzilla films for unrestrained action and imagination.

I comment further on these pictures in my Claws & Saucers guidebook. But I hope you’ll enjoy the links and comments here: 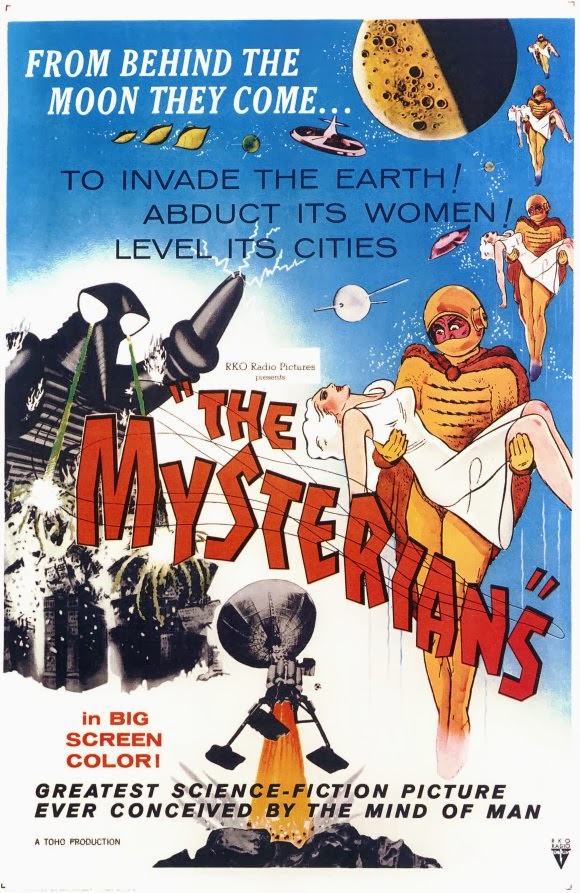 If you enjoy watching villagers flee in panic while soldiers, tanks, and planes battle with giant robots, flying saucers, and alien fortresses, then by all means watch The Mysterians.

Although the aliens come seeking Earthwomen for breeding purposes, they actually become sympathetic. They intend to treat the women like princesses. But Earth refuses, of course, and a battle royale begins.

With the exception of Earth Versus the Flying Saucers, American films of the time had very limited battle sequences – it was rarely more than one tank, one jeep, one building, one plane getting destroyed. Here, its dozens. 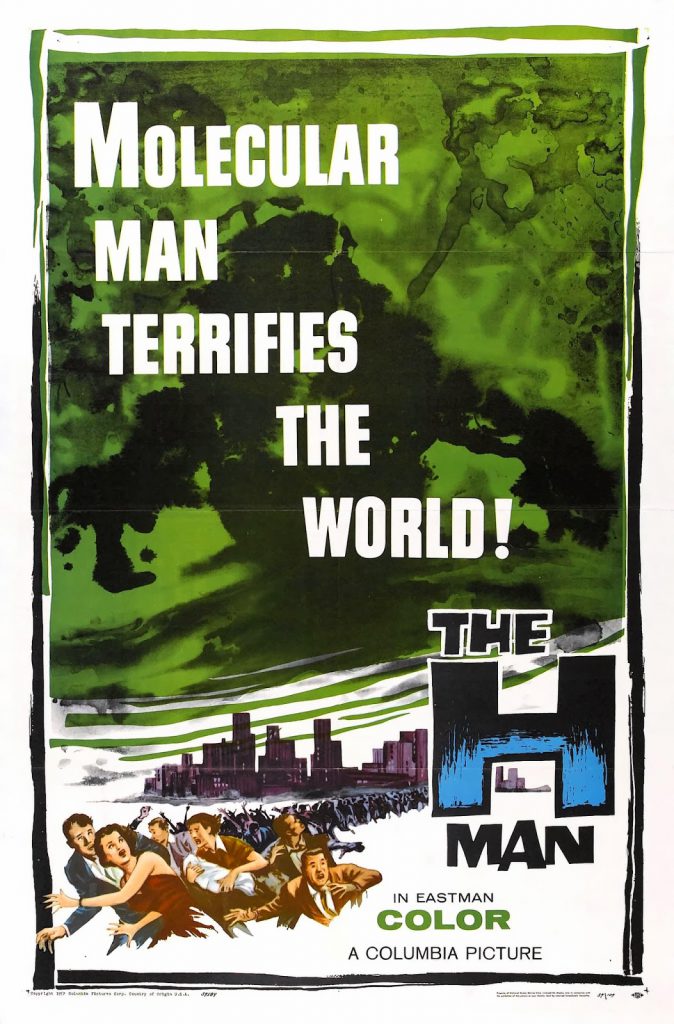 Here’s a good Japanese blob movie made the same year as The Blob (the Steve McQueen one) in the US.

Blob movies are inherently gory, so be ready for several humans (and several frogs, in a lab) to get graphically dissolved into blue bubbles. The victims then become blobs themselves. It’s a gangster movie for the first 40 minutes, but the gangsters visit a nightclub with an all-Japanese jazz quartet and a troop of dancing girls in bikinis.

The blobs crawl horizontally across walls! 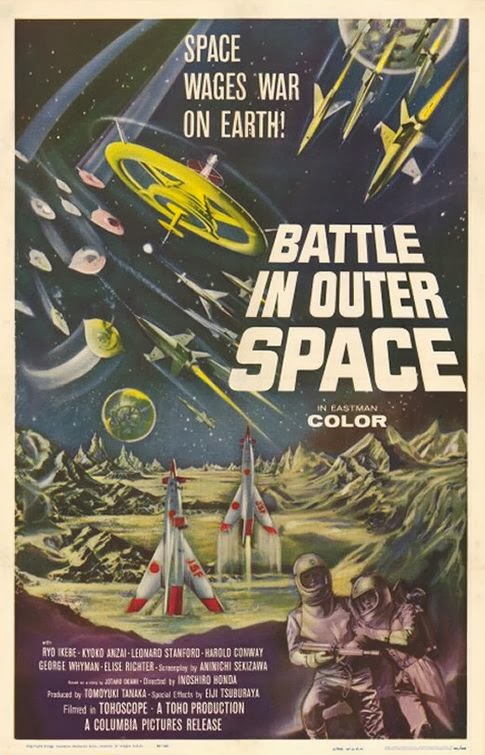 The plot is very simple, especially for a Toho film. Aliens attack a space station, Earthlings attack the alien base, aliens attack Earth, Earth defends itself, and thats it. The aliens proclaim that “The whole Earth will become a colonial satellite for our glorious planet Natal!” The aliens are four feet tall and have helmets shaped like kangaroo heads. The battle highlight is an attack on a dome-like moon base by a squadron of track-mounted moon cars.

At the end, the aliens destroy the Golden Gate Bridge!

MATANGO: ATTACK OF THE MUSHROOM PEOPLE (1963) 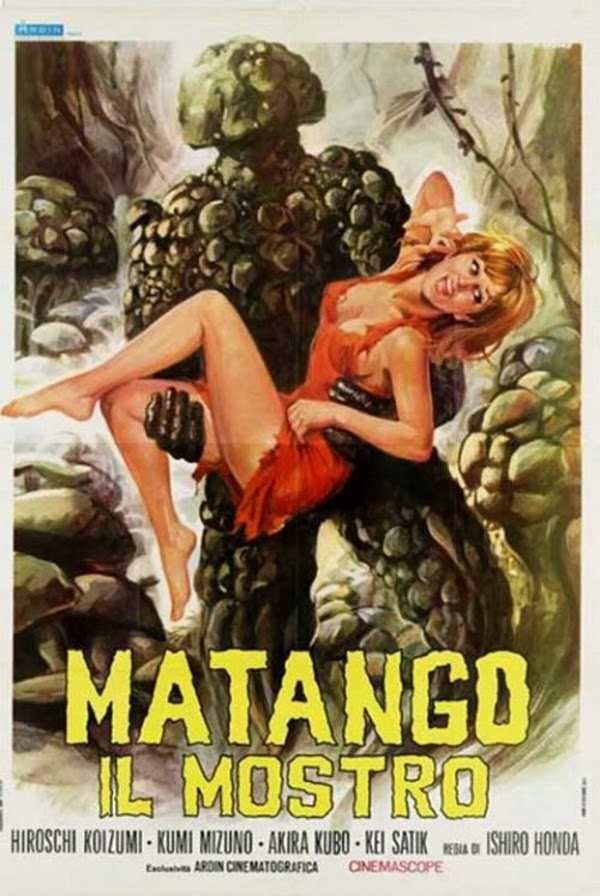 What sounds like a rip-roaring campfest is actually a message-driven horror-drama about the dangers of addiction. Its weird and grotesque.

The story takes us aboard a yacht on which five men and two women find themselves drifting, and then marooned. On the island, only strange mushrooms grow. The mushrooms offer nourishment… but eating them turns you into a mutated mushroom-monster.

Is it worth becoming a mutant in order to survive? 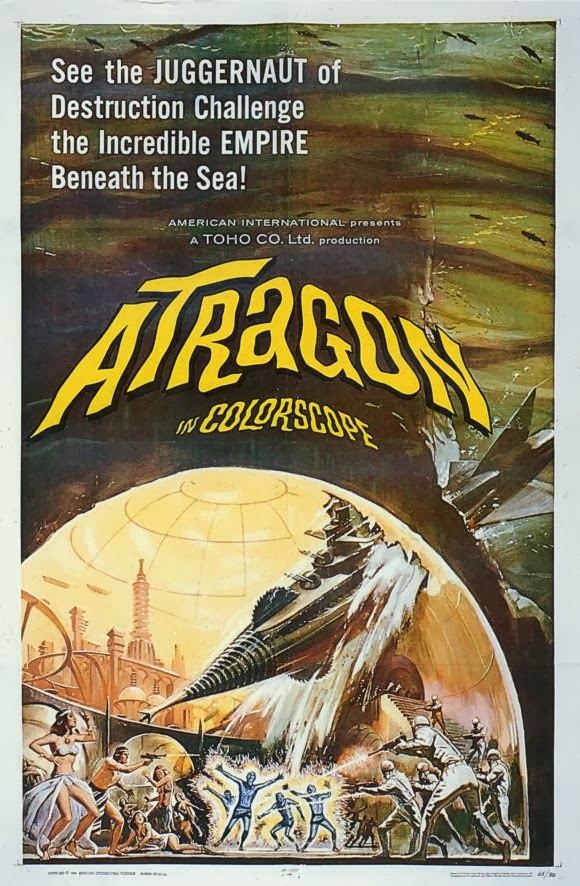 The “Atragon” submarine/airship was Toho’s largest model, and the details are marvelous.

The craft can burrow underground, shoot beams of freezing cold, and more. The complex plot is centered around the menace of Mu: an Atlantis-like continent sunk beneath the sea 12,000 years ago whose powerful inhabitants have decided to return to the surface and conquer – or destroy – the surface world. Mu technology can cause earthquakes and floods, or create fiery beam weapons or guided flying bombs. The only thing they fear is the Atragon.

While flawed as a genre film since the battles are too quick, Atragon still offers thought-provoking drama as it directly confronts the issue of nationalism in the post-WWII world. 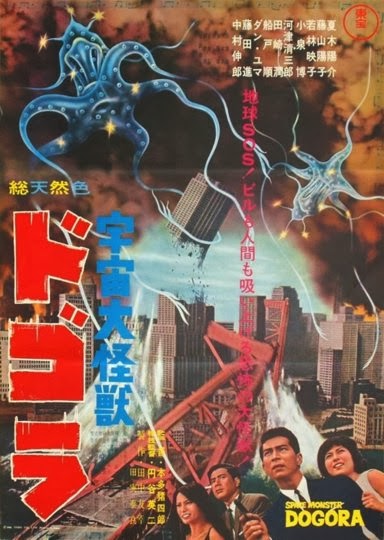 To avoid disappointment, you might want to think of Dogora as a cops-and-robbers movie first and sci-fi movie second.

There is a monster – and it does mutate from amoeba form to jellyfish form – but its total time is limited. Most of the fun arises from the lighthearted cat-and-mouse chase between a gang of diamond thieves, a private investigator working for the diamond industry, and a heroic young cop.

Historically, this is Toho’s first space monster, predating King Ghidorah by several months. The film’s standout images are mountains of coal flying upwards, sucked into the sky to be consumed by the monster. 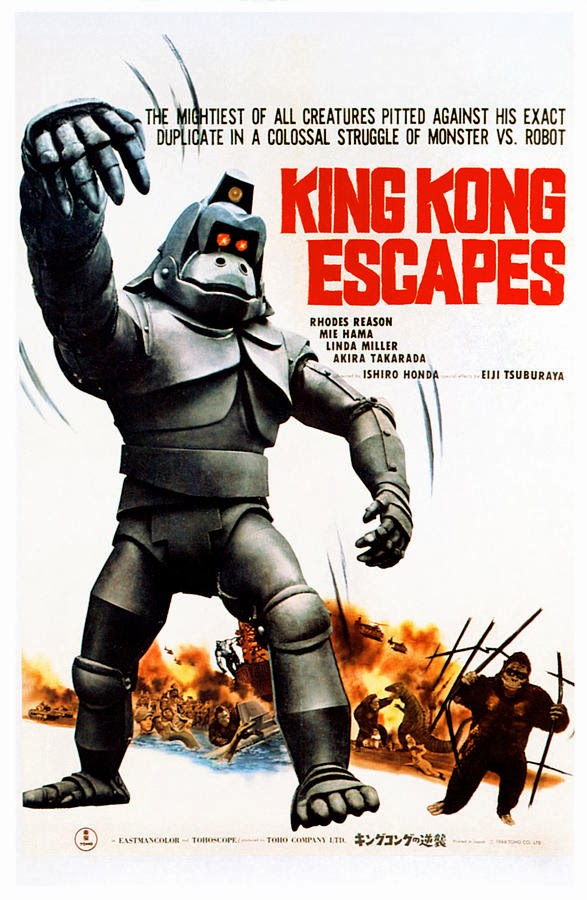 Boys 8-12 should enjoy it most, but then again I watched it as a 40-year-old and had a blast. Not more than five total minutes passes without action. Some James Bond-style villains initiate the main conflict. They wear black suits and white gloves. Their base is at the North Pole! They build a life-sized robot Kong, but they also capture and enslave the real Kong. (I know, this is a partial exception to this list’s no-kaiju rule.)

The ape suit is ugly, but the final confrontation – like when Godzilla fights Mechagodzilla – is great. 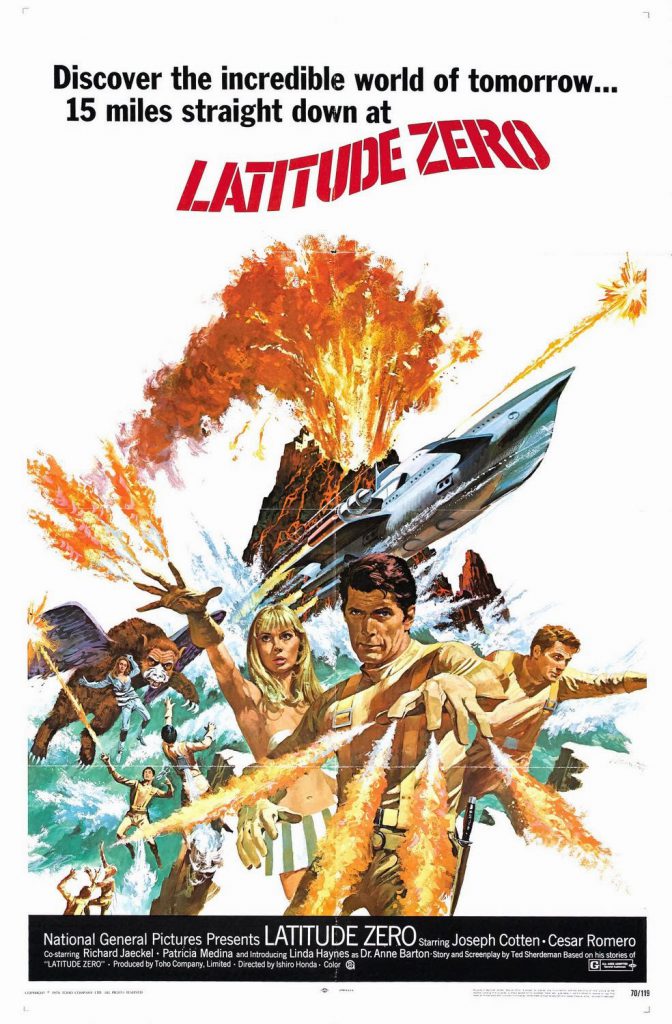 McKenzie rules Latitude Zero, a gorgeous city beneath the sea with architecture ranging from classical to futuristic. Except for a silly lion suit, the special effects are spectacular by 1969 standards.

With quick pacing that makes the film feel half its length, Latitude Zero cruises on the energies of its own audacity and craziness. 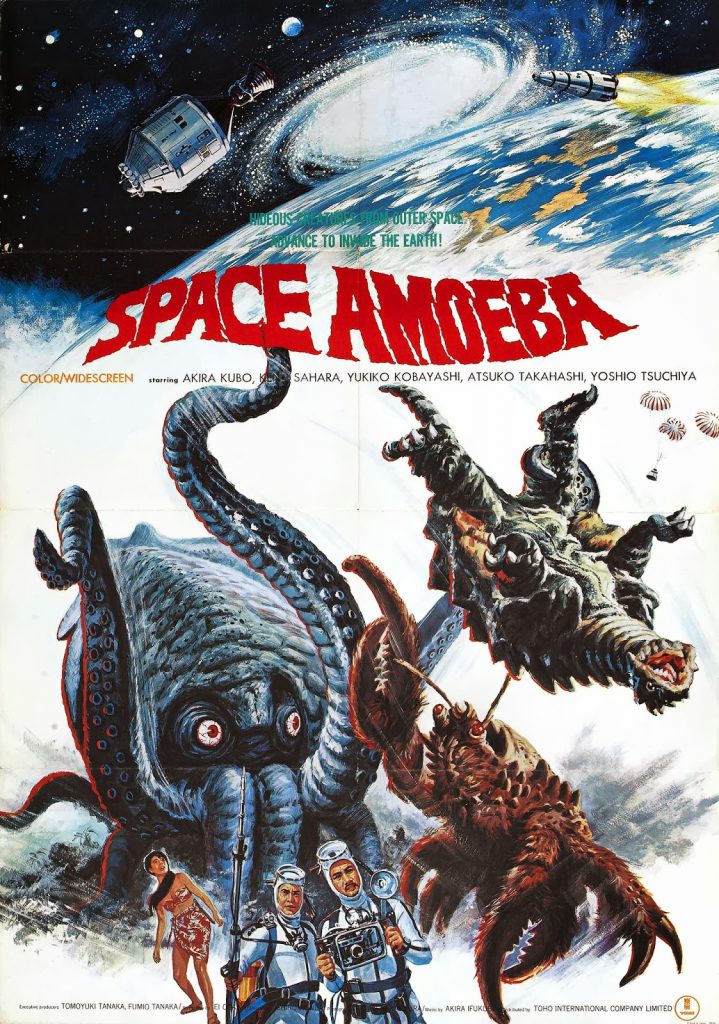 Simple and fun, Space Amoeba offers a classic 1950s-style plot in which the monster appears from time to time, killing individuals or destroying buildings, until a small band of heroes can find One Thing that will defeat it.

The monster is more of a ghost than an amoeba, really. But it has the ability to take over and transform Earth creatures such as a squid, a crab, and a turtle. Lest a squid, crab, and turtle sound unexciting, let me assure readers that all three are very well realized on film (especially the squid, which gets the most screen time).

Kids 8-12 will like it best but adults should also enjoy it. I loved it as a kid and drew a picture of the amphibious squid attacking people on shore. 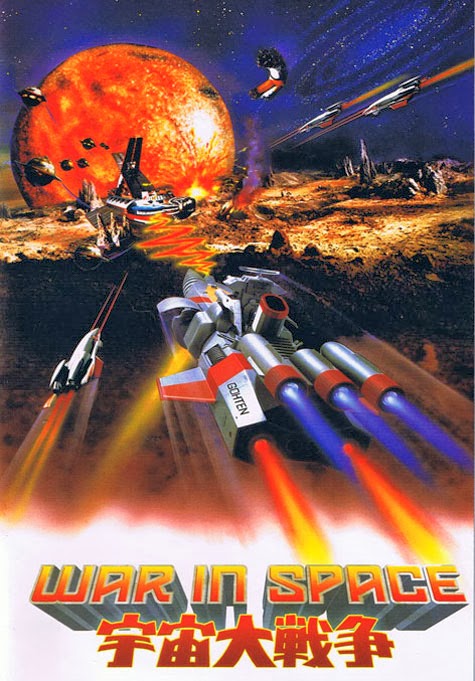 By late 1977, even Toho wanted to imitate Star Wars.

But War in Space resembles Star Wars only in surface details.

It takes place in 1988, when the United Nations unleashes a giant battleship/mothership to defend Earth against alien imperialists who blow up famous monuments and threaten to enslave the galaxy. The first few battles are disappointing, but action gets much better in the second half, with space battles, a land battle on Venus, and a final confrontation between Earth’s “Gohten” battleship and the unnamed alien battleship. Special effects are inconsistent, but this is typical for Toho, and not a major handicap.

Obvious Star Wars touches include an opening shot that pans through space, a wookiee alien, a light dagger, and the line “I’ve got a bad feeling about this.”