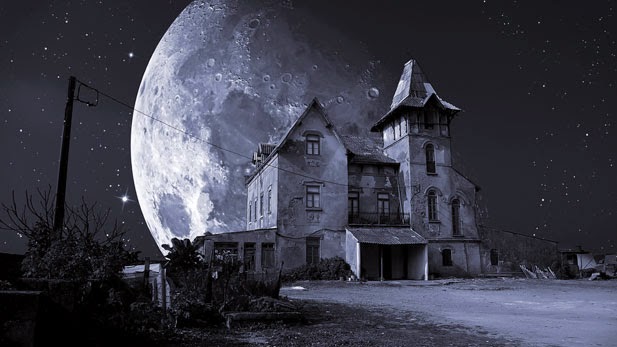 Yeah, yeah, I know that a scary haunted house movie list is more in line with the Fall rather than the season of renewal like Spring, but let’s face it, the scariest stuff doesn’t always occur when the weather turns chilly, it happens when the warmth and safety of sun comes back to us and we let our guard down.

So, after indulging in a self-imposed Spring Break vacation binge-watching 40 or so various “Haunted House” films (my husband was away for seven days and couldn’t criticize the fact that I didn’t leave my bed for almost 168 hours straight), I’ve managed to narrow down my top 13 picks (it seemed like a goodish number) that will scare, spellbind and generally make you fearful of every little creak that you hear in the dead of night.

Enjoy (or complain…whatever floats your boat).

For some, the original Japanese movie, Ju-On, is far superior to the US version, but while I appreciate their opinion, I have to stand by the fact that it was remake that made me wet my pants, not Ju-On. And frankly, any movie that creates a non-sexual moistness in my panties gets my vote for “HOLYFUCKINGWHATTHEFUCK!!!!”.

13 Ghosts might contain more camp than actual chills (thanks to the always awesome William Castle), but it still manages to be a fun semi-scary time (and a perfect way to introduce the little ones to horror). Personally, I like to use it as a palate cleanser between freakier fare to help take down the scare factor.

As a side note, avoid the 2001 remake. Sure it contains more gore and frights, but the original is a lot more fun.

You can buy the movie HERE.

A movie about a bunch of people cleaning up a condemned (and possibly haunted) insane asylum? Oh yes please. And it’s filled with enough scares that will render me unable to sleep for days? Bonus!

Director Ti West is creating quite a horror catalog (V/H/S, House of the Devil, Cabin Fever 2) for himself but this particular flick relies more on ambiance than gore to provide the scares. Great performances and a tightly wound script about a dying haunted inn keeps you on your toes (or the blanket pulled up around your eyes).

Try not to watch it while alone.

8. The Woman In Black

I’ll admit it, I watched this movie simply because Daniel Radcliffe was in it but I have to say, I got over my fan-girl shtick about five minutes into the movie. By the time it was over, this Victorian horror-noir about a widower trying desperately to hold onto his job while suffering from severe depression after the loss of his wife, had me jangled to bits. Not to mention pretty freaked out to be alone in my house.

A WWI period piece about a female paranormal de-bunker who visits a boy’s school in order to rule out a ghost as the cause of rampant fear and injury might seem like a like a quaint “Downton-Abbey-Goes-to-The-Haunted-Mansion“-type movie, but there’s a certain darkness in it that keeps it from falling into post-Edwardian-era nostalgia that could make it feel like a Merchant/Ivory film.

Disturbing with artful twists, this is one of those films that will stay with you long after it’s over.

Watch it on NETFLIX, AMAZON INSTANT or BUY IT

Popular? Yes. Has most everyone seen it? Probably. Do you remember the ending? That was like 13 years ago, so no. Okay,  then re-watch this 2001 classic about a woman and her children living in a haunted isolated house while awaiting the return of her husband..

We’ll talk about it afterward.

This might be a freaky movie about a man (Kevin Bacon) who is hypnotized at a party and comes out of it with the power to see a ghost that is haunting his house, but really, it’s story is about the need to right a wrong and how that need affects all who are around him.

Yep, it’s scary and moody, but the psychological terror pales to what the living will do to keep a secret.


I absolutely love this tale of a writer who ends up in a haunted room at a hotel (wait, this premise kinda sounds familiar) and all hell breaks loose. I absolutely love the fact that all the bad shit begins straight away (instead of pacing itself like a mall walker with a cane). I absolutely love that the room is a complete and utter asshole with no problem in kicking the crap out of the main character, Mike Enslin. What I absolutely hate is the cookie-cutter bullshit theatrical ending that makes everything seem A-Okay…lucky for me there are a few alternative endings on the DVD version that remedies this situation quite nicely.

BUY IT for the alternate endings.

THE SHINING IS AT NUMBER THREE? WHAT THE HELL IS WRONG WITH YOU?

Okay, I agree that the Stanley Kubrick classic (and do I need to even go over the plot at this point) is worthy of being number one but this is my frakking list so deal with it.

AMAZON INSTANT or BUY IT

Poltergeist was my childhood. When my brother and I unwrapped a Betamax back in the early/mid 80s as a holiday gift from my dad, the two movies that he gave with it were, Star Wars and Poltergeist. So everyday after school me and my young sibling watched both…Did you read that? EVERY FUCKING DAY.

And by god, that kind of dedication to Tobe Hooper’s masterpiece of suburban terror deserves to be awarded the number two Haunted House spot.

But let’s not forget that this is also one of the greatest horror movies ever made and should be watched religiously…if not on a daily basis.

1. The Lady in White

To be honest with you, this is more of a haunted cloakroom/forest than that of an actual house, but the story of a young boy (Lukas Haas) who gets locked in his school’s cloakroom on Halloween and sees the ghostly murder of a young girl is probably one of the most frightening films ever made, especially to anyone who happened to go to the movies in 1988 and thought it was going to be similar to a Disney horror flick (think A Watcher in the Woods).

Needless to say, even at the ripe old age of 14, and a connoisseur of horror movies, this tale simply scared the crap out of me. Thanks to it’s ability to play upon the fears of young kids and a creepy score that lingered in your nightmares (not to mention it completely ruined the song Did You Ever See A Dream Walking by Bing Crosby for me) The Lady in White remains, to this day, a movie I will not EVER see by myself.