With Larry Hama delivering us the milestone issue of G.I. Joe #200 this week, we also have an 80’s Marvel graphic novel reprint in the form of issues with Walt Simonson’s Star Slammers #1 (remastered).

Over in ComiXology Submit land, wash this down with a spooky British team in Department O #1. 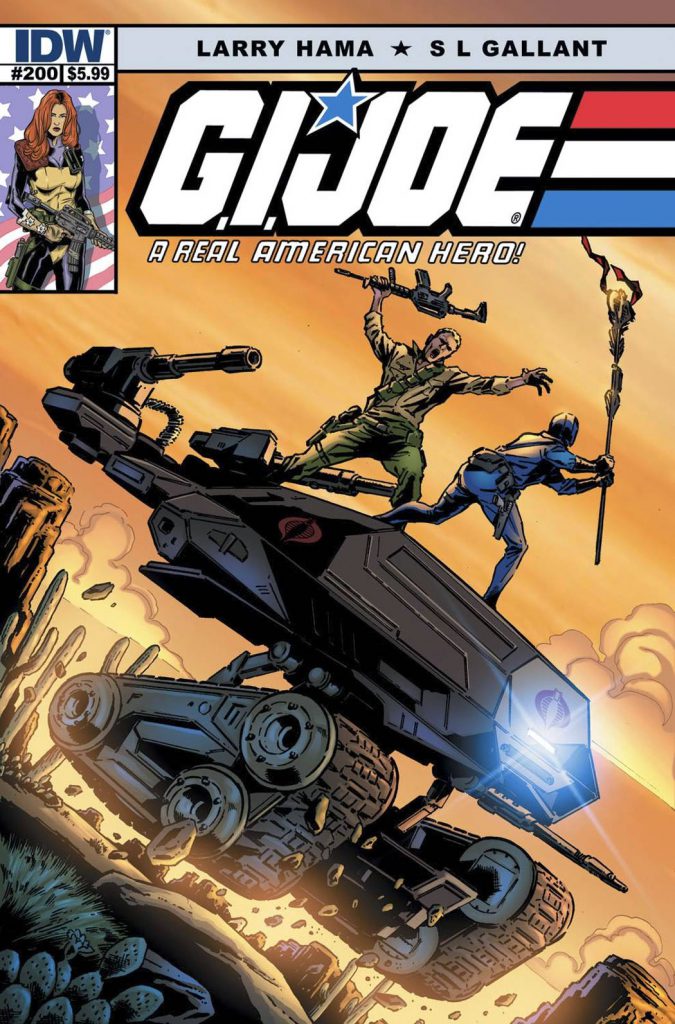 “Yo, Joe!” – That’s what you’ll hear like the shot heard round the world tomorrow at 11 or noon when the shops open up in your town.

In fact, here in nearby Somerville, Tim Finn of Hub Comics is giving away 200 copies of this six dollar book for free today! All coming from a love for the ninjas, soldiers, tanks, reptilian villains and military banter sensei Larry Hama has given us since the first comic series (there have been many since) in the G.I. Joe franchise!

My heart fluttered in anticipation of reading the book and suddenly I was 12 years old again!

This double-sized issue has a climactic standoff between our arrogant and whiney Cobra Commander and top notch Joes, including original Joe Coulton (played by Bruce Willis in G.I. Joe: Retaliation.

There is one page, near the end of the book that is fan service to us loyal RAH fans. Joe Headquarters The Pit is given a reboot and boy howdy is it cool.

IDW even reenlisted the letters page, ‘Postbox: The Pit’, where a young Clay N. Ferno was first published way back in 1991 (Issue #110, Saw-Viper)! You best believe it, I wrote in a gushing Postbox letter immediately. If I’m in the Joe letter page twice in my life, I’m dropping my microphone and walking away!

Happy Anniversary to Larry, Herb Trimpe, and new artist SL Gallant (and of course all of the great RAH artists, too many to mention here)! Dinner Wednesday: frozen pizza, grape soda, and little chocolate covered donuts! 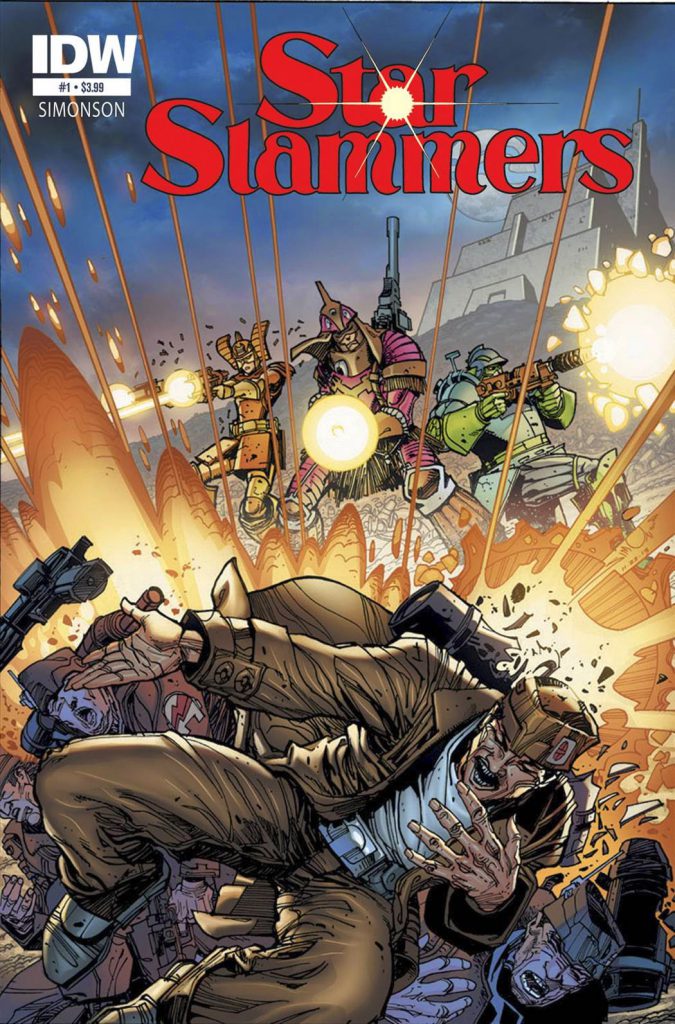 Walt Simonson’s RISD portfolio piece, an ashcan comic Star Slammers that landed him his Marvel gig, was published as one of Marvel’s Graphic Novel series in 1983.

IDW snatched up yet another opportunity to re-release this graphic novel and introduce the space warriors to a new audience in the remastered Star Slammers #1!

Simonson is best known for his Thor work and Fantastic Four (duh) but the master continues to crank out work to this day, recently on Indestructible Hulk!

Going back to this graphic novel reprint in floppy, Simonson is releasing new covers, and as page breakouts will necessitate, new cover and intro pages for new readers!

For fans of Star Wars and also the Marvel Cosmic, blended with a bit of classic Joseph Campbell mythology, you have a lost relic dusted off and presented to a comic book audience that will soon see Marvel take Guardians of the Galaxy to the big screen.

To be clear, this is an original graphic novel, not set in Marvel or any known universe. This is the kind of story you’d see at Image or Icon these days.

Don’t sleep on the Star Slammers — what might be familiar in the background of the setup here, Simonson’s vision, storytelling and incredible art will astound you, and you will see where some of your favorite writers and artists are stealing from! 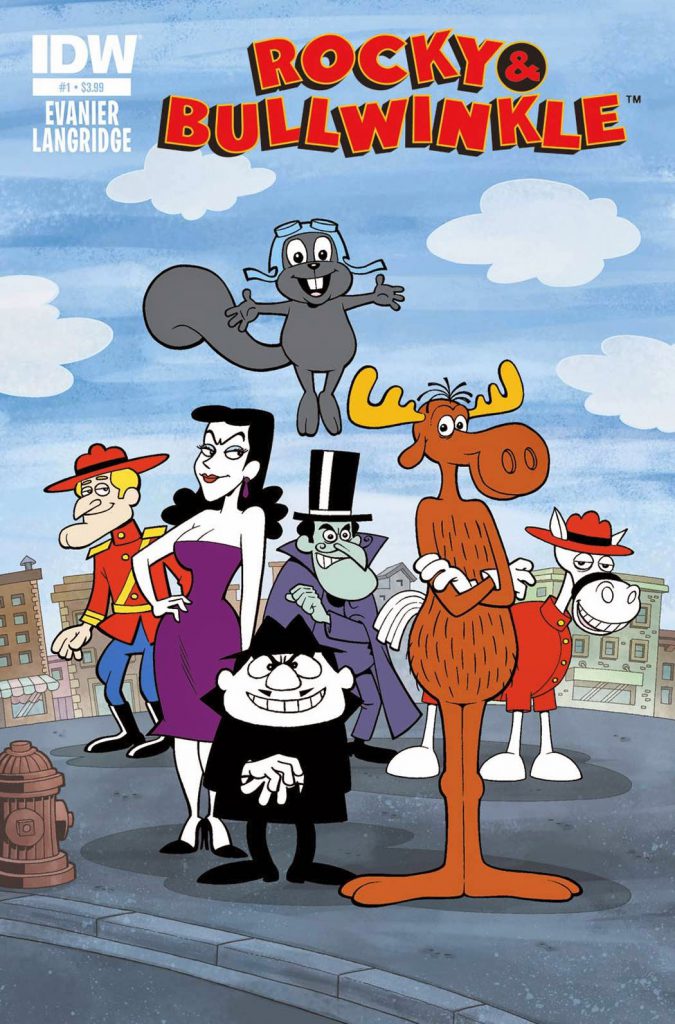 Is this an IDW party, or what?

Unintentionally, but for good reason, we blew up Image a few weeks ago, this week at Idea and Design Works is especially good, and now with the added bonus of having our favorite Moose and Squirrel cracking jokes as Boris Badenov and Natasha Fatale try to spoil the fun!

Mark Evanier (Garfield cartoon, Groo) writes the gags in classic cartoon style, taking us back to the days when Rocky and Bullwinkle the Moose were on TV.

Another super-fun return to classic TV animation from IDW! The lineup is pretty impressive now with Popeye, Samurai Jack, Powerpuff Girls, and a books about small horses. 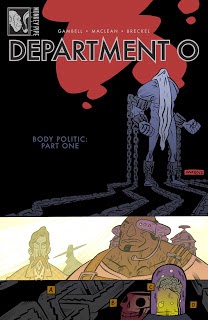 I noticed issue #2 of this book being pushed at me in recent ComiXology submit titles, so I went back to the first ish to see what the hub-bub was about!

Very cool artwork and story here that is part B.P.R.D. stylistically, but also story wise, as a league is assembled with anachronistic technology in what appears to be Victorian England.

A solid issue from a great artistic and writing team here, mixing The Avengers assembling with The League of Ordinary Gentlemen plot twists!

Looking forward to catching issue #2 as our team is gathered for its first mission!