After Star Wars and Close Encounters of The Third Kind did so much to add optimism and triumph to science fiction film, along came Alien to remind everyone that science fiction can be subsumed by horror.

I was only 10 when Alien was released in 1979, so I wasn’t allowed to see it, but I still remember staring, fascinated, at the ads and commercials.

Even the newspaper ads were scary. 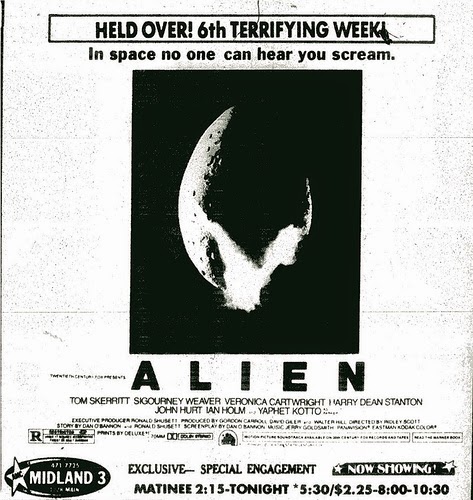 “In space,” said the famous tagline, “no one can hear you scream.”

The movie’s success led to a host of imitations, most of which took every opportunity to be gory, sleazy, or both.  I like to think of these downbeat Alien imitators as a counterweight to all the upbeat Star Wars imitators that were still flooding into the theaters in the early and mid 1980s.

To be a hardcore Alien imitator, you need to feature a small crew of regular folks (rather than heroes) in an isolated location (a compound or vessel) stalked by an otherworldly creature who mutates as the movie progresses.  Gore is also a necessity.  A serious theme – something about the misuse of corporate or political power – is a bonus but not a necessity.

I therefore count nine films as hardcore Alien imitators.  Here they are chronologically.  I comment further on most of these in my Claws & Saucers guidebook, but I hope you’ll enjoy the remarks and links below.  At the end, I’ll mention a few related films that almost made the list.  Note: several links are NSFW! 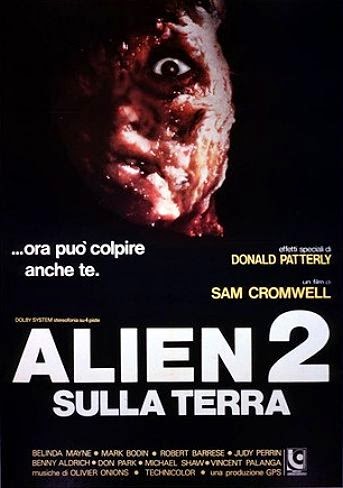 This Italian-made fake sequel was released less than a year after the original Alien.  It’s an obvious rush job, padded with boring back-and-forth transition scenes.  It’s set in a cave (not a bad idea when there’s no budget for spaceship sets) where an alien hatches from a blue egg and kills the spelunkers one by one.  Two good gore scenes come in the middle.  A couple of “alien eye view” shots come at the conclusion.  Everything else is a waste of time. 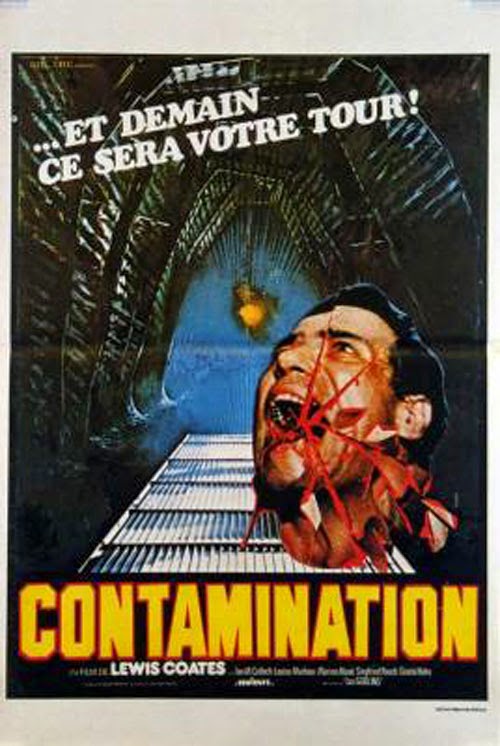 Alien meets James Bond in this surprisingly exciting imitator, also made by Italians.  Our hero and heroine traverse the globe until they find an alien cyclops administering a sinister incubation plantation for its eggs.  Some special effects are laughable, like the “eggs” which are obviously balloons.  But the cyclops looks real and scary.  Underrated and recommended. 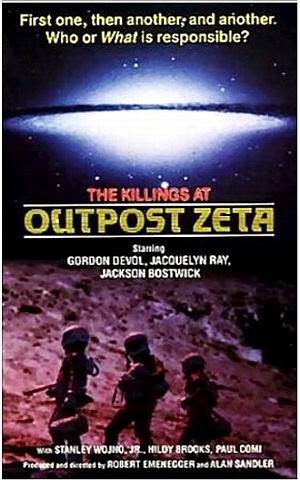 Here’s the least famous of all Alien imitators, and no wonder, since the characters talk and talk, and discuss things, and ramble, and talk and talk again.  They slowly figure out that walking alien rocks killed the colonists at the Zeta outpost.  At last, if you can hang in there, the beam weapons and the force field fence come with decent special effects. 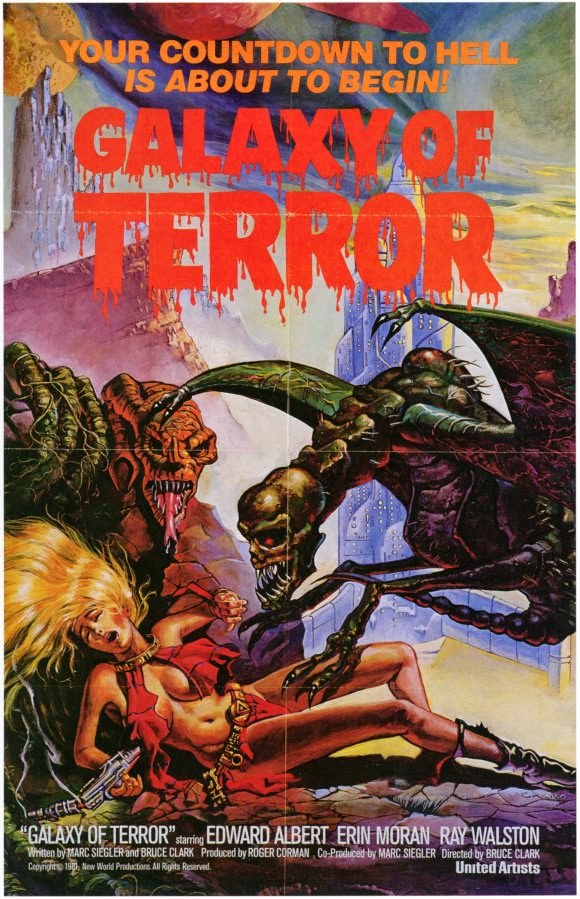 Though sleazy and disgusting, this is the best regarded of the imitators.  I rank it second, behind Contamination.  Keep the kids away, because the space crew finds their nightmares literally coming to life on a hostile mystical planet, and some of these nightmares are pretty darn gross.  Sid Haig and Robert Englund have small roles.  Roger Corman co-produced. 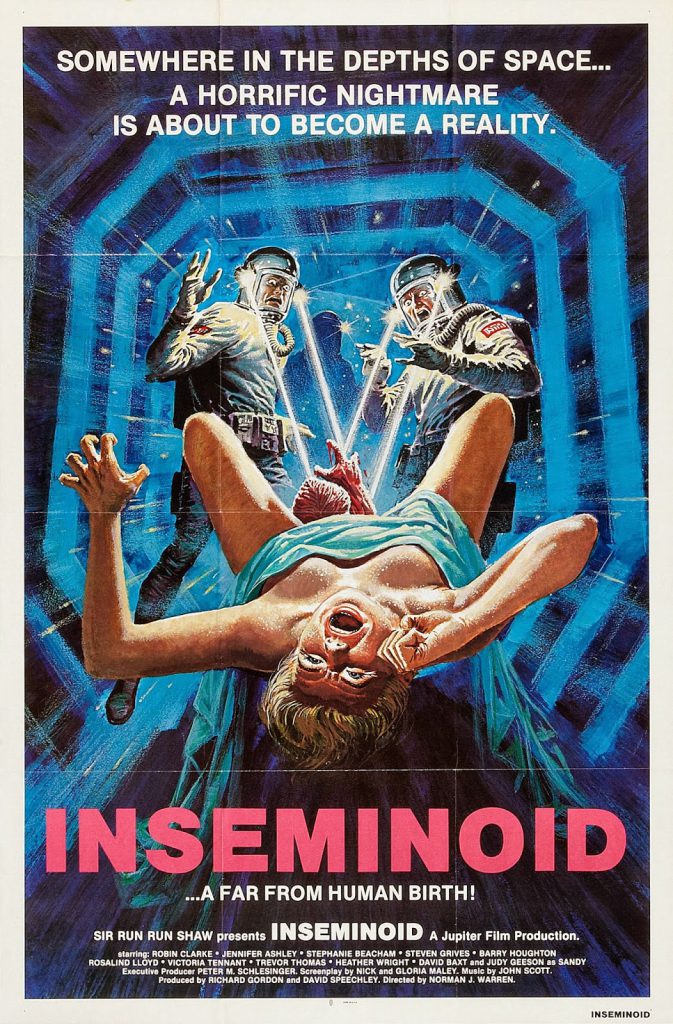 Made in England, and hated there as much as anywhere else, Inseminoid claims the dubious honor of being the lowest ranked of all Alien imitators (which, we must admit, aren’t such a highly regarded bunch to begin with).  It has the right ingredients, including some vivid gore and a weird alien dream montage.  But a bitter and cruel tone pervades the whole.  For a while, it was ranked below 2.0 on the IMDb. 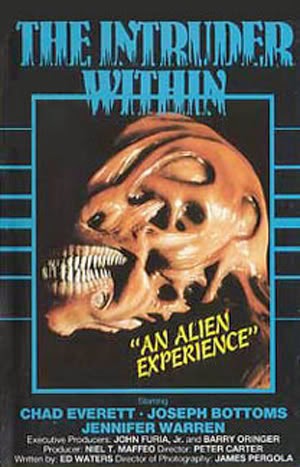 Because it’s made for TV and therefore lacking in the usual graphic gore and sleazy nudity, you would expect this to be the least exciting of the imitators.  But actually it has interesting characters, interesting ideas, and a well-paced plot.  It’s set on an oil rig.  The main problem is that the monster mostly looks like an indistinct shadow. 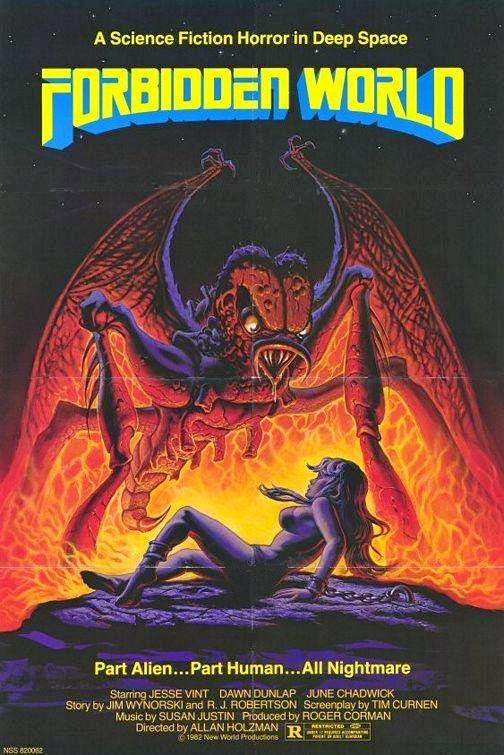 After Galaxy of Terror was a minor hit, Corman co-produced this follow-up, which ramps up the nudity and gore but loses the trippy weirdness that made its predecessor unusual.  It has a condescending tone.  The characters act ridiculously.  But the effects are good, and it has its share of fans. 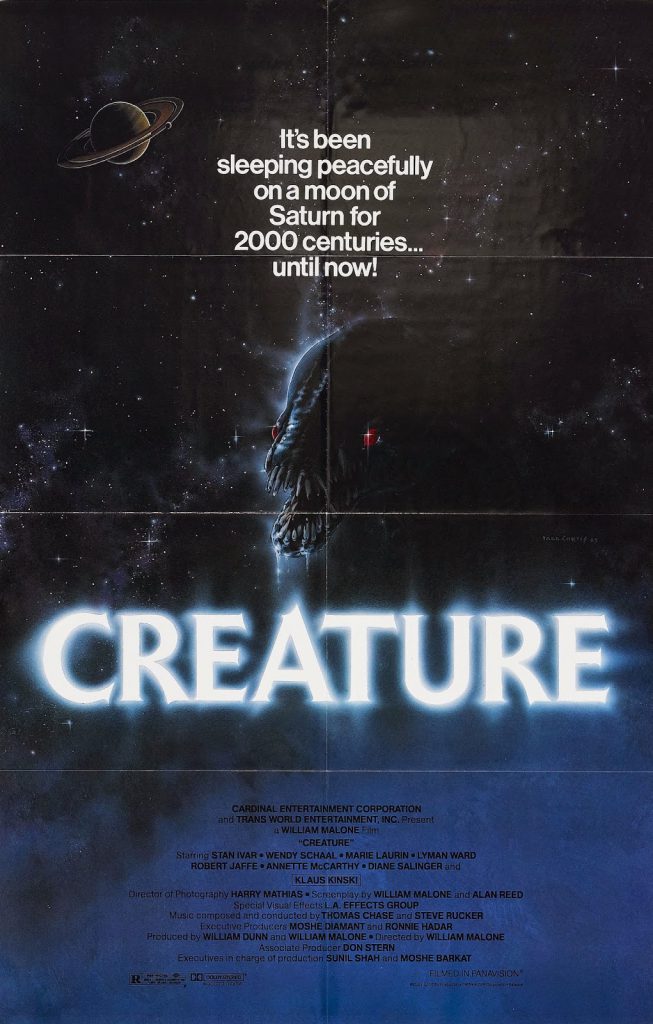 This belated imitator ain’t bad at all.  It’s almost as good as Galaxy of Terror.  The plot is a mixed-up hack job, but the effects are convincing.  It is the closest to the original Alien in appearance and feeling.  The gore scenes are great.  The alien can assume people’s forms (like in John Carpenter’s The Thing), so it assumes the form of a hot astronaut babe and then gets naked.  Klaus Kinski has a small but good role in the middle third. 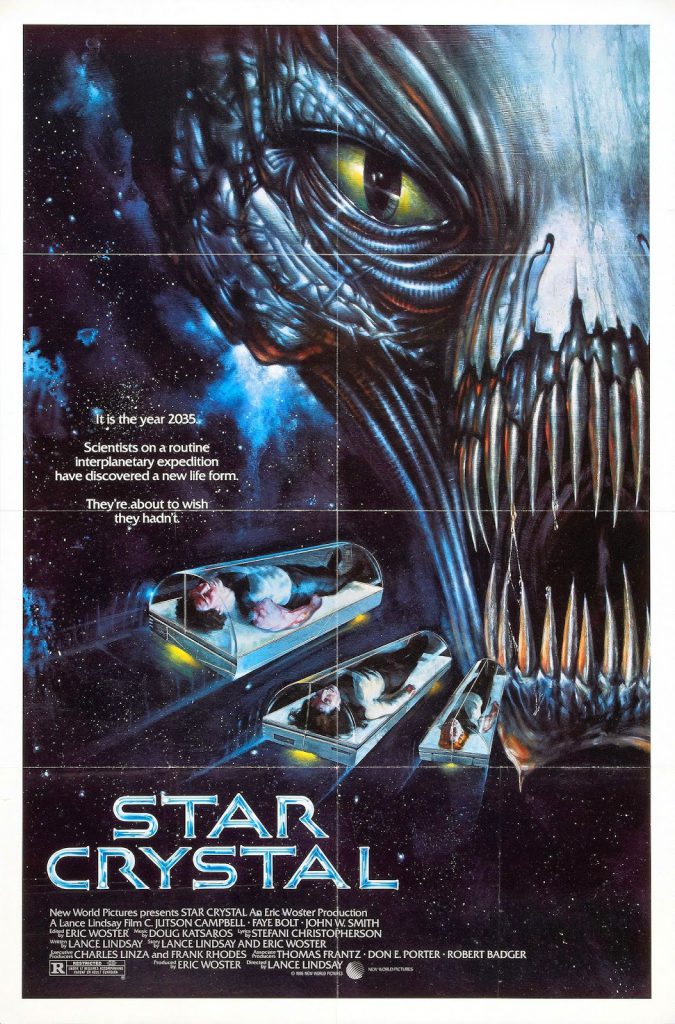 To describe this last Alien imitator of the 80s, I need to spoil it.  So please beware SPOILERS ahead!  Three quarters of the movie is the familiar Alien setting and situation: a small crew of Average Joes on an isolated space vessel, stalked by a tentacled alien who kills them one by one in bloody, gory attack scenes.

But then… the survivors befriend the creature, who’s really a nice guy deep down, and they all become buddies, joking together and playing board games together on the ship.  When they part at the end, they give tearful farewells.  No, I’m not kidding.

These disparate elements simply cannot mix, which leads many viewers to hate Star Crystal as much as they hate Inseminoid.  I’ll give it credit for good intentions.  And for helping me to imagine what it would be like to have an alien buddy who looks like a melted E.T. puppet covered with slime.

P.S. Here are the other movies that almost made this list:

Perhaps I should also mention The Creature Wasn’t Nice (a.k.a. Spaceship, 1981), a Leslie Nielsen parody which uses Alien as the basis for its simple plot.  It’s nowhere near as funny as Airplane! or Naked Gun (no surprise), but the bit with the alien singing lounge music is a standout.