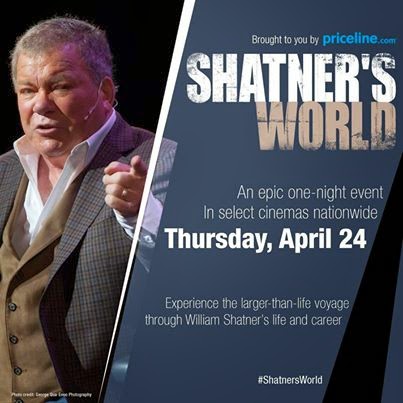 On Thursday, April 24 at 7:30 p.m. local time, television and movie superstar William Shatner stars in “Shatner’s World,” brought to you by Fathom Events and Priceline.com.

The two-hour show will take audiences on a retrospective voyage through Shatner’s life and career through his laugh-out-loud humor, signature storytelling and select musical selections in his inimitable style.

He is known as much for his unique persona as for his expansive body of work on television and film.

In addition to a spectacular show, cinema audiences will be treated to an exclusive welcome message from William Shatner himself.

William Shatner is an award-winning actor, director, producer, writer, recording artist, philanthropist and horseman. In 1966, he originated the role of Captain James T. Kirk in the TV series Star Trek, which spawned a film franchise where he returned as Kirk in seven of the movies, one of which he directed. He played the title role in the hit series T.J. Hooker before hosting TV’s first reality-based series, Rescue 911. He has won numerous awards, including an Emmy and his first Golden Globe for his portrayal of Denny Crane on The Practice and Boston Legal. He also garnered four Emmy nominations as well as Golden Globe and SAG Award nods.

And thanks to our friends at Fathom Events, we’re giving away five pairs of passes for the winner and a guest to see Mr. Shatner on screen at the Revere Showcase Cinemas on April 24th!

To enter, please send an email with the subject header “SHATNER LIVE” to geekcontest @ gmail dot com and write a Shatner-esque haiku.

A magnificent three line poem composed of 5 syllables, then 7 syllables and then 5 syllables that must be composed as if it’s coming from either Captain James T. Kirk, T.J. Hooker or Denny Crane.

Please include your name and mailing address (This contest does not include travel or accommodations. You must be 18 years old.  Entrants from outside the New England area will be discarded and banned from all other Forces of Geek contests).