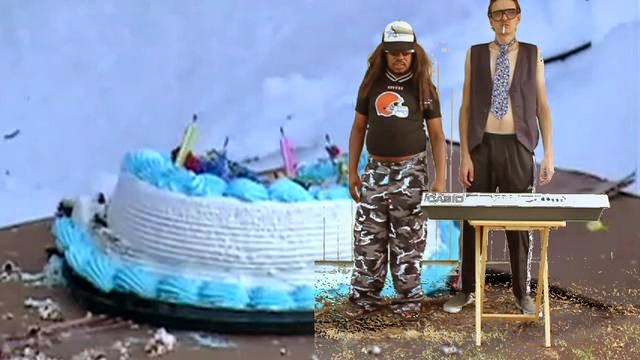 That’s sort of a big deal, especially to those of us for whom middle-age just kinda crept up on us without us realizing it. In fact, it didn’t really dawn on me that I was actually 40 until around 3 am this morning when I was awoken by the reality that I have reached a specific age in which I was supposed to have achieved something…like offspring or a career that provides a living wage.

I didn’t go back to sleep after that.

Instead, I sort of spent the four hours before sunrise on YouTube crying at dog videos and trying to pick out the perfect music video that could encompass the off-putting, heavy feeling that turning 40 does to a person (Dead Kennedy’s Holiday in Cambodia? Fear’s I Don’t Care About You? Whitney Houston’s I Just Wanna Dance With Somebody?).

After careful consideration (and an early morning shot of Sambuca) I turned to Total Ghost‘s Happy Birthday Video For Special Person because well, it just seemed to be the kind of song that fits the deep, dark depression that makes a former 39 year old spend her day of birth in bed trying to figure out how the hell there’s only twelve years between the ages of 28 and 40 (seriously, shouldn’t those two ages be like 50 or 60 years apart?)

I hope you like it, if you don’t feel free to track me down and yell at me (I’ll be the one under the bed covers dry heaving between the sobbing).