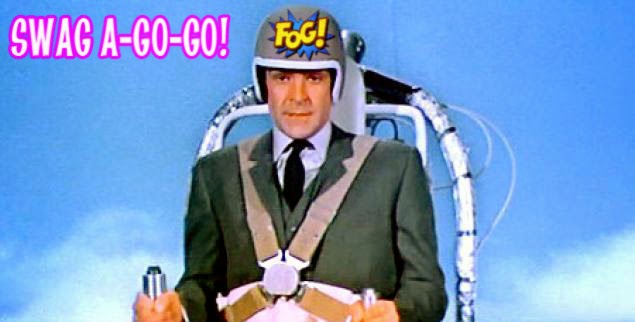 Here at FOG! HQ lots of cool stuff comes in, giving us the opportunity to check out some merchandise, that to be completely honest, we think you should check out!

This time out we’ve a bunch of t-shirts, toys and gadgets geared toward your savvy inner nerd. 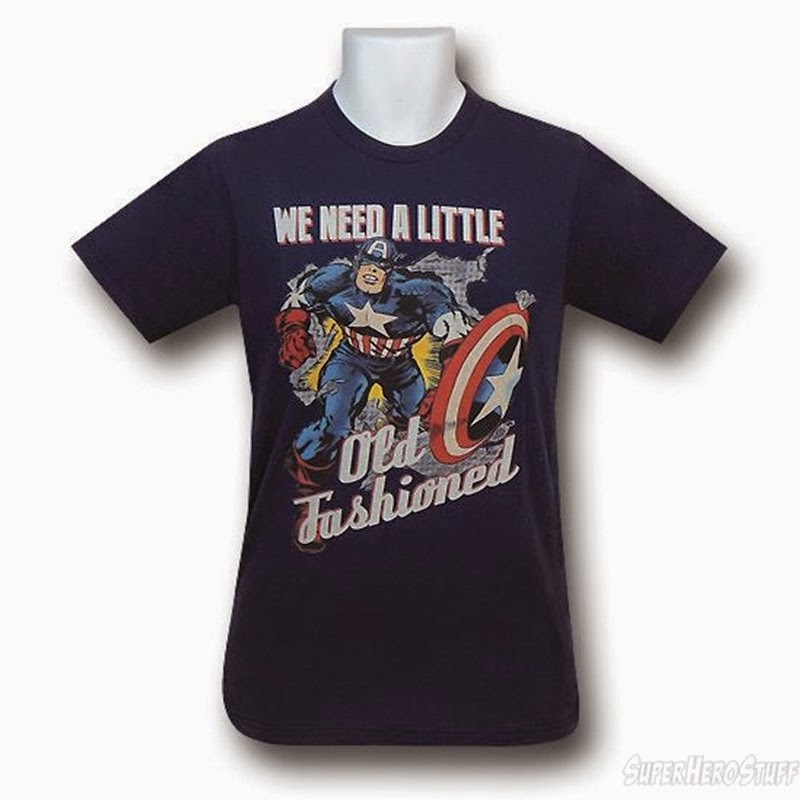 This fantastic shirt from SuperheroStuff.com features an iconic image of Captain America bursting through the center ilustrated by The King of Comics himself, Jack Kirby!

It might not be easy to get your hands on a cup of Dr. Erksine’s Super Soldier serum,  but this 100% cotton, extra-soft 30 Single thread count t-shirt is just a click away! 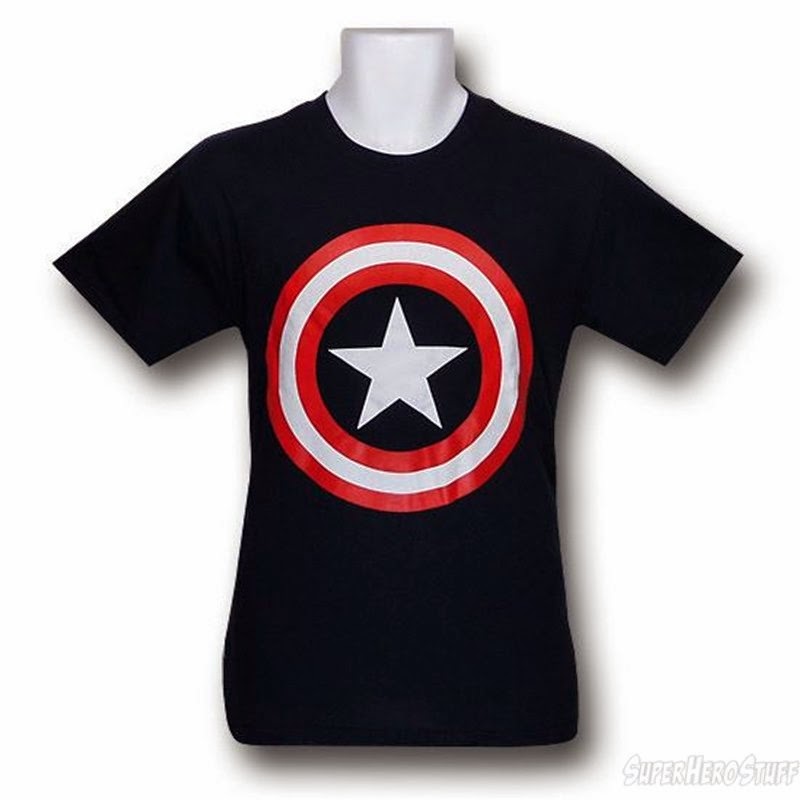 This classic and iconic Captain America Shield shirt from SuperHeroStuff is a must have!

Remember, until April 30th, all FOG! readers get 15% off at  SuperheroStuff using the code FOG15. 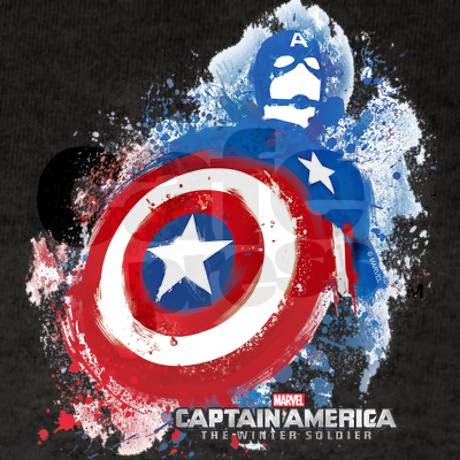 From the folks at Cafe Press comes this pretty neat Captain America: The Winter Soldier T-Shirt displaying the iconic hero with his shield.  The shirt is available in a variety of colors and the design is available on a number of different products.

“Captain, in order to build a better world, sometimes means tearing the old one down… And that makes enemies.” – Nick Fury 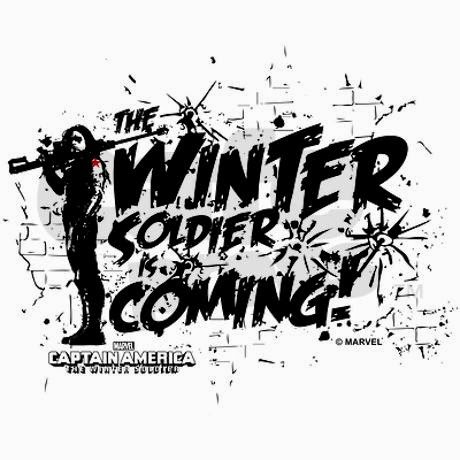 The Winter Soldier Is Coming T-Shirt

One of the mysterious characters in the latest Captain America film, The Winter Soldier is so important to the Star Spangled Hero’s mythology they named the movie after him.

And the shirt.  Available at Cafe Press.

“Most of the intelligence community doesn’t believe he exists. The ones that do call him the Winter Soldier. He’s a ghost, you’ll never find him…”  – Natasha Romanoff, The Black Widow 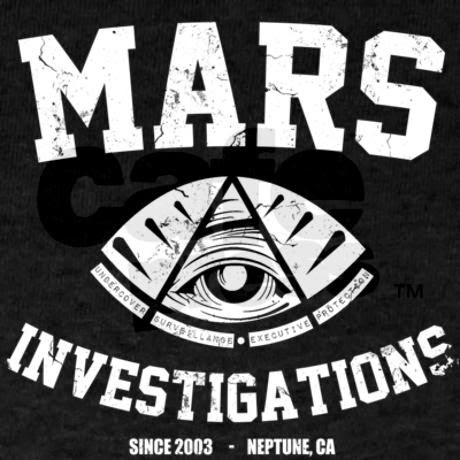 A long time ago we used to be friends, but I haven’t though about you lately at all until a Kickstarter turned movie turned home video release (This May!), there’s no better time than the present to pimp out wearing the icon of Neptune California’s number one detective agency (and that includes Vinnie Van Lowe).

So before you head back to the reunion and see Mac, Logan, Wallace, Weevil, Gia and Dick Casablancas, do yourself a favor and pick yourself up one of these shirts via Cafe Press.

Meanwhile, in Gotham City, millionaire Bruce Wayne and his youthful ward, Dick Grayson, answer Commissioner Gordon’s plea for help as some of the known currently at large criminals have combined forces to defeat the Dyanamic Duo!

Will the Caped Crusader and the Boy Wonder save the day?  Will The Joker pull the proverbial leg of Cheif O’Hara?  Does it matter?  These AMAZING Funko releases are a must have to any fan of the legendary tv series.  There’s been a massive influx of Batman ’66 merchandise this year and these are, in my opinion to best of the best and belong on the shelf next to your Shakespeare bust and Red Batphone.

Remember, until April 30th, all FOG! readers get 15% off at  SuperheroStuff using the code FOG15. 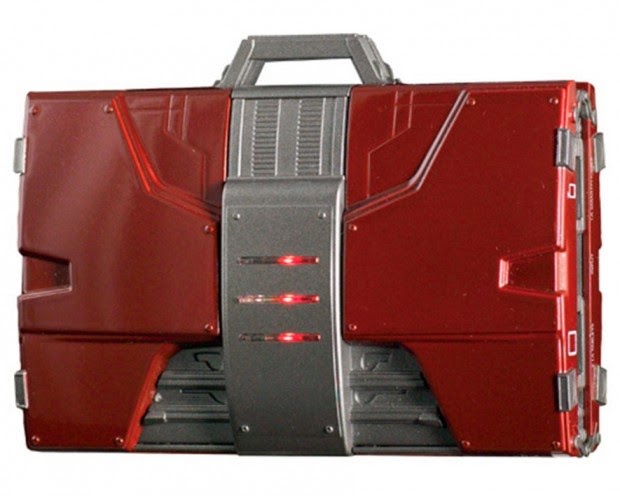 On one hand, this is an officially licensed, incredibly cool 12,000 mAH battery pack that’s screen accurate (at 1/4 scale) and can be used as the power source for your mobile device.  It’s incredibly simple to use, is compatible with most smartphones and tablets and very simply allows you to gauge the power level remaining by the lights on the side of the briefcase.

On the other hand, it’s more successful as a prop than it is as a charger.

It’s a bit awkward in size and shape and compared to other similar models, it’s a bit heavy.  A definite cool item for a collector and Iron Man fan, but as a tool or as something that you carry around, it’s not the best choice despite it’s solid performance. 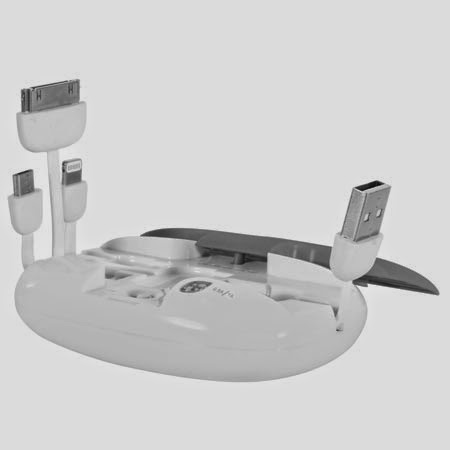 This might be the essential must have for anyone who wants to ensure they have emergency battery power for their smart phone at any moment.

Small and lightweight, the Emergency Power Bank has a number of impressive features including 4 different connectors – Lightning, Apple 30 Pin, USB and Micro USB, the ability to charge multiple devices, an impressive 4000mAh battery capacity as well as the ability to choose between 0.5A and 1.0A outputs. There’s also a light monitor that shows the status of the battery as well the ability to turn the device off when not in use.

There are a few issues with the device that will hopefully be adjusted in future models. Although the cables are included (and already connected),  the length of each cable is a mere 2 inches which makes charging a but more challenging at times.

That being said, despite it’s limitations, the Power Bank is small, light, portable and is a must have accessory. Recommended.

IK Multimedia has produced a solid portable microphone that makes a great addition if you use your phone or tablet microphone often.  The sound is clear and built in headphone jacks allow you to connect to your headphone jack, leaving the 30-pin connector free,  A dual mini-jack connector lets you monitor the recorded signal.  It’s perfect for conducting podcasts, recording interviews and eliminating background noise.

Unfortunately, it doesn’t do what I hoped, which is record calls (where many of my interviews are conducted).

Nevertheless, the sound quality is top notch and not only can elevate the quality of your videos, but also allows the files to be exported via FTP or email (no Drop Box, unfortunately). 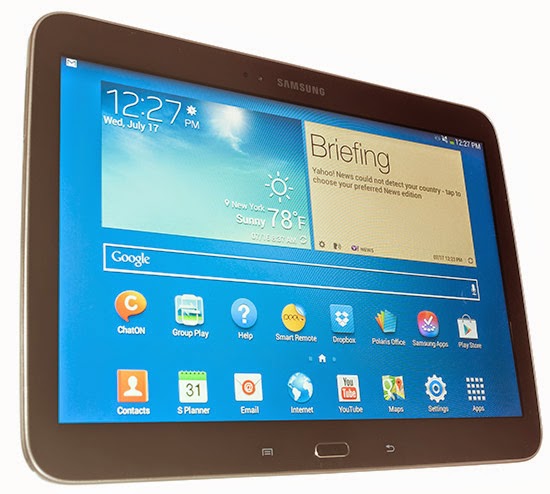 I’ve debated the need for a tablet since it can’t do what I need it to do in terms of upkeeping the site (not entirely true, it can, it just would take a ridiculous amount of time).  Now that I’ve used the Galaxy 3 for a few months, it’s served an incredibly useful purpose, as a companion to my work, and as an essential part of my leisure time.

I’m pretty familiar with the Mac OS and have had an Android phone in the past, so using this tablet out of the box took mere moments.  Keep in mind, this is an indispensable tool and I’d be ridiculous not to acknowledge that I’m pretty set in my ways for what I use for what purpose.

I primarily use my phone to upkeep on my social media, although Facebook is pretty much up for grabs.  Using it on the Galaxy Tab is a pretty solid experience.

Streaming video has been a wonderful experience on the Galaxy Tab.  Although the sound is fairly low without an external speaker or headphones, the picture is crisp.  I primarily use it for Netflix and HBO Go, and would use it for Amazon Streaming if and when an app is released.

Reading has been primarily accomplished in the past by my Nook.  Since the Galaxy Tab also has a Kindle app, there really isn’t anything that I can’t read on this thing.  And everything opens as it should; making the experience simple.

I’ve always been mixed on reading comics on a screen.  I’m not a fan of the Comixology navigated view, but reading books via their regular app, PDF and cbr/cbz files has been pretty fantastic.  Navigation is smooth, and it’s easy enough to sit down and read for a bit.

I’ve also used it for shopping (Amazon primarily) and unlike the fruit named tablet, a big caveat is the ability to add memory via a SIM card.  The touch screen is a bit too sensitive, and personally, I found the battery life to be far shorter than I’d expect when just reading.  The placement of the two buttons also tends to cause a number of accidental presses.  The lack of ability to sync to my iTunes account is another disappointment.

For me, the Galaxy Tab works, and does so as a secondary/tertiary device.  It delivers, but nothing is particularly amazing; it’s just good enough.  The large number of apps available is attractive, but ultimately I found it to be an excellent supplement to my digital arsenal rather than a primary device.

(I’m required to disclose a relationship between our site and Intel. This could include the Intel Corporation providing us w/content, product, access or other forms of payment.)