The Joes seem to be wrapping up another season, can it be over for G.I. Joe proper until the fall?  IDW gets bloody with a new violent vampire tale with V-Wars #1 by best selling author Jonathan Mayberry while over at Image JMS cues Cheap Trick for Dream Police #1.

With all the talk about the ComiXology and Amazon changes, we forget that ComiXology still supports indie comics, so we shift focus to an independent book featuring flora vs. the deadliest game in The Vine #1. 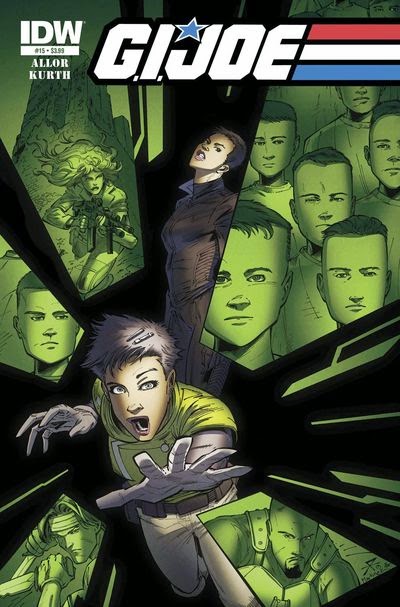 “Yo, Joe! See You Next Fall?” – Sometimes a volume ends with much fanfare, or at least some warning in the solicits gives it away.

Not the case here, I was surprised to see a thank you page listing all of the creators involved with the initial Fred Van Lente’s run on the book and beyond after leaving after issue #11.

The young and talented Paul Allor took a look at the back story of Cobra Commanders, miming the main point of Hickman’s S.H.I.E.L.D. that embedded Cobra into the fabric of human history.

The latest and final issue continues and concludes last month’s arc that has Cover Girl and team responding to a Cobra operative Siren looking to rescue her son from a Cobra brainwashing and training camp. The camp is run by a female Big Boa and indoctrinates the youth to be good Vipers someday.

Cobra son Isaac doesn’t seem to want to be rescued, but Roadblock, Hashtag and Cover Girl do their best to undo the brainwash and return the rest of the kids to their parents.

A fun story, a fun ‘season’ of Joe, all wrapped up here. Van Lente borrowed from everything Joe including Sunbow, Devil’s Due, A Real American Hero and the toy lines to give a fresh injection to the storyline that is different from Hama or Dixon’s approach to the characters. Allor continued the vibe on his fill-in issues and to great success.

What is next for the IDW Joes? A teaser page for September’s The Fall of G.I. Joe with a teaser ‘you will always need us’.

Allor confirmed on twitter this morning a ‘soft reboot’ for the fall. 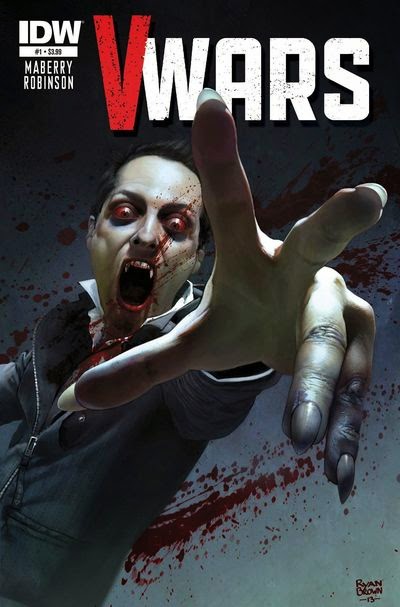 The V-Wars is the comic book adaptation of the award winning vampire prose work by Jonathan Mayberry.

The story combines rich present day comic storytelling in a vast world not unlike the paradigm shift in The Walking Dead.

Vampires are in this case living among humans until a political assassination kicks off a war between humans and different factions of vampires.

In this case, comparisons can be made to recent Dark Horse Buffy comic seasons but also the story pays tribute to government military shows like 24. The story is bloody and violent and full of political intrigue! Cool looking vampires, military action and betrayal fill these pages and I’m loving every second of it. Alan Robinson is a great storyteller and made one of the goriest panels of the week (page 5!)

Backup includes an excerpt of the prose novel, also released an available from IDW in hardcover, for those that like that sort of thing; It will be a while still before the Vampire Lestat is back in his new book! 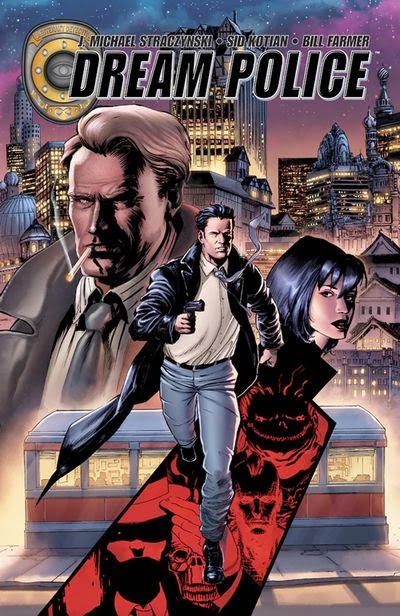 As a longtime Babylon 5 fan, I always like to keep up with JMS in the comics and television world.

The Image Comics imprint – Joe’s Comics – has been steadily launching new titles like Ten Grand and Sidekick for about a year now, and the latest installment harkens to a Cheap Trick song for its title, Dream Police.

Issue #1 is strictly world building, but in a way that only JMS can do.

We catch standard police detectives Joe Thursday and Frank Stanford at their desk arguing about their partnership and how they will attack the next case but the catch is, they are in what Sandman fans will recognize as The Dreaming.

This cop tale deals with mishaps in the dream constructs and behaviors of the changelings and wisps that make up people’s dreams.

Nightmares are the clean-up men called in to any situation not resolved directly by the Dream Police.

This fantastical world with constant changing rules and based in a cop noir show is worth the read, especially for anyone that has ever imagined our dreams being made up of elaborate set pieces and architecture accessible only by sleep. Issue #2 will deal with the partnership relationship between the two detectives, as even this is not entirely as it seems!

I’m enjoying these Joe’s Comics books, at least for a few issues a piece and look forward to reading this one, Sidekick and Ten Grand in trade, as I like to have the whole story in front of me for JMS comics and don’t feel the need to pick these up every month like the Batman junkie that I am! 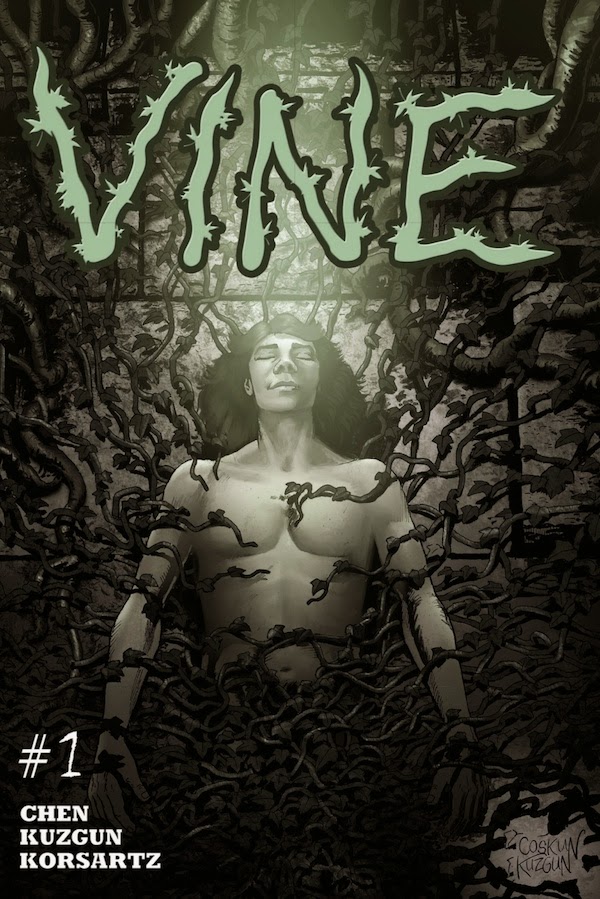 Calm down, iPad owners, you still get to read comics digitally on a MAGICAL COMPUTER YOU HOLD IN YOUR HAND!

Sure, checkout process for ComiXology isn’t as smooth as it used to be, but let’s not let the indie creators suffer because of that.

There are plenty of ComiXology Submit titles on the site for only a dollar, and like this week’s Vine, rival what you can get at the store shelves from the big two.

ComiXology still supports indie creators so until that changes, let’s keep our eyelids propped open to some of the most creative stories our community has to offer.

Science and intrigue are mixed in Vine with a bit of Indiana Jones!

A boy has been missing and presumed dead for 13 years. When a team of military explorers find him in a temple enwrapped in a living vine, the green starts to defend itself. This book has great black and white art and the story is reminiscent of The Thing. We’re looking forward to issue #2!

As they say in the back of the book — help them ‘grow’ and support this book with a buck!