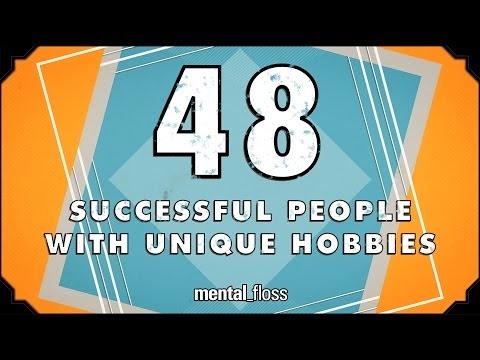 I’ve been told many times that developing a hobby is beneficial to a healthy mental state and while I agree totally with that belief, I have yet to convince others that “Bitching and Moaning” is a real hobby…which it should be…because I’m good at it.

Also, I knit, but only the most basic of stitches, and I only seem capable of making washcloths and scarves, and nobody really appreciates a set of knitted washcloths as birthday or holiday presents so, whatever.

And, if I’m being completely honest here, sometimes I look longingly at my old sticker collection which includes some fabulous Lisa Frank ones and I think, “Maybe I should get back into a hobby that I started when I was six and ended when I was twelve after discovering that girls with obsessive sticker collections were not the ones that got kissed in a closet during the game Seven Minutes In Heaven“.

In this week’s Mental Floss offering to the gods, John Green counts down a list of 48 successful people who have engaged in unique hobbies like Bob Barker’s love of karate (which was taught for 8 years by none other than Chuck Norris), James Madison and Thomas Jefferson’s marathon chess games with each other, San Antonio Spurs player Tim Duncan’s nerd hobby of going to Renaissance Fairs and playing Dungeons and Dragons, plus many, many more.

So check out what rich and famous people do with their spare time, who knows, you might get inspired to take up your own hobby…although try not to go into stamp collecting, those people are weird.