Dynamite Entertainment is proud to announce that Fox’s hit Animated Series – Bob’s Burgers: The Comic Book series, will be coming to comic stores everywhere this upcoming August, and the series will be written, drawn, and overseen by the writers, animators, and producers of the TV Series! Now you can read about the Belcher family (parents Bob and Linda, and their children Tina, Gene and Louise) in brand-new in-canon stories, appearing exclusively in this comic book series. Bob’s Burgers is an animated sitcom that airs on Fox television with other hits such as The Simpsons and Family Guy! 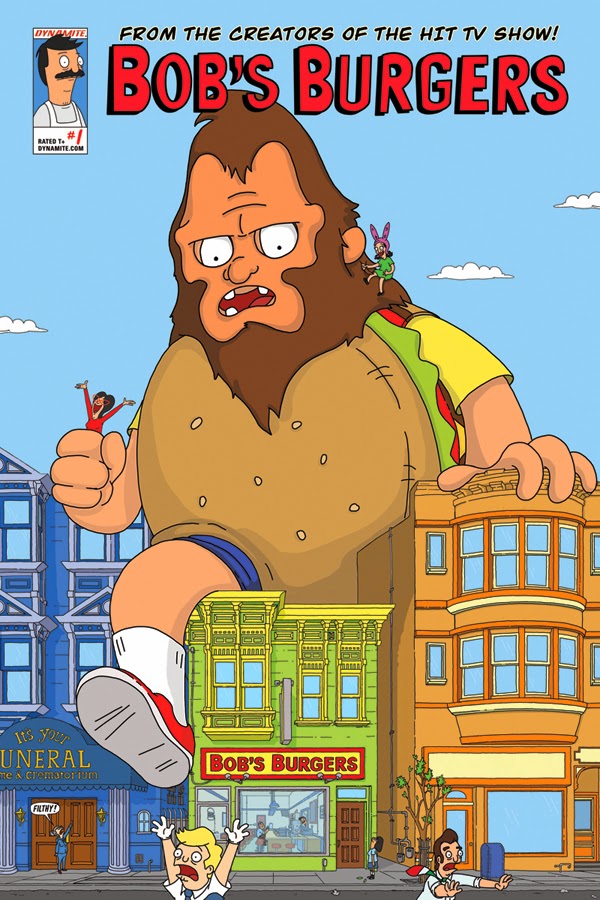 “If you like Bob’s Burgers and you like comic books then you may feel like you’re living in one of the greatest times in human history because Bob’s Burgers and comic books are coming together in the form of the Bob’s Burgers Comic Book. But of course we could really mess it up. Then you’d feel like you were living in one of the worst times in human history. Either way, we hope you’ll check out the first few issues. We tried to make something that’s true to the show and true to the form without being a sad knock-off of either.”

“When we announced Bob’s Burgers at San Diego Comic-Con last July – and the fact that Loren and his entire team would be involved in every detail of production – the response was huge,” says Dynamite CEO/Publisher Nick Barrucci. “And the results are fantastic – the creative team over at Bento Box Entertainment has put together some incredible stories and artwork, perfectly suited for the comic book format. We’re grateful for their dedicated involvement, and eagerly anticipate that the Belcher family’s comic book shenanigans will draw in fans from outside of the direct market.”

Bob’s Burgers #1 will be solicited in Diamond Comic Distributors’ June Previews catalog, the premiere source of merchandise for the comic book specialty market, and slated for release in August 2014. Comic book fans are encouraged to reserve copies of Bob’s Burgers #1 with their local comic book retailers. Bob’s Burgers #1 will also be available for individual customer purchase through digital platforms courtesy of Comixology, iVerse, and Dark Horse Digital.