We’ve been enjoying Knuckleheads since the beginning.

Writer Brian Winkeler was kind enough to join us to talk about issue #6 available today on ComiXology. 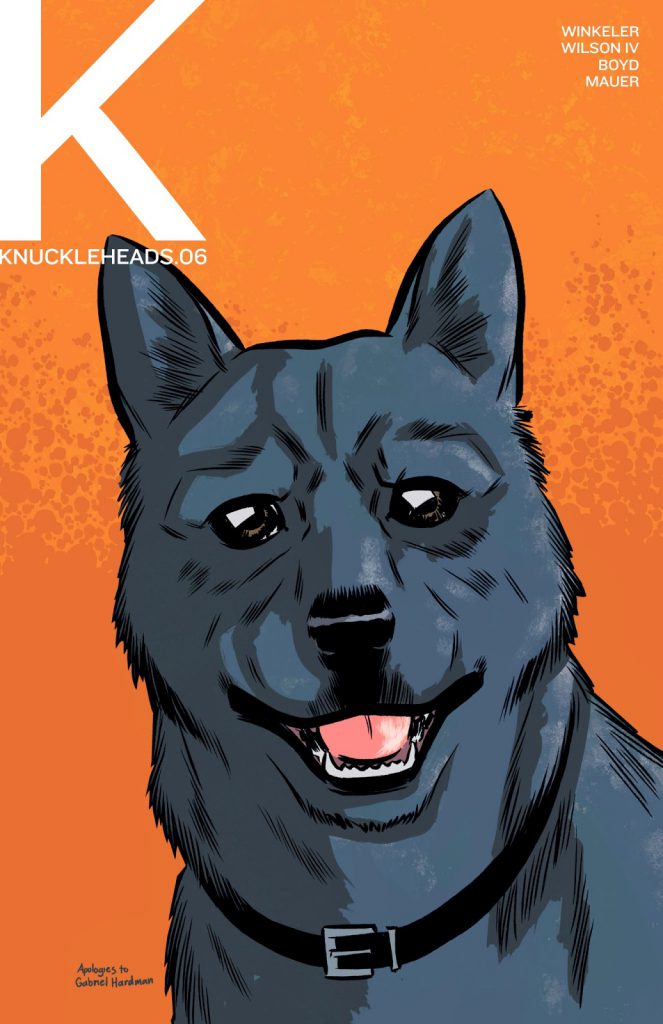 Aliens gave Trevor a fist with special powers, but will he be able to control it for that much longer?

Here is Brian to reveal the buildup to the latest issue.

FOG!: Hey Brian – thanks for joining us for Knuckleheads! Seinfeld voice – “What’s the deal with Crystal Fist?”

Brian Winkeler: The weapon or the “superhero?”

The weapon is kinda sorta maybe like a Green Lantern power ring but Trev (our protagonist) was way hungover when he got it so he’s super fuzzy on it. All he knows for sure at the start is he can use it to cheat on video games and steal Netflix.

He learns more as the series progresses.

Issue one brings the band all together, a ragtag bunch consisting of our ‘hero’ Trevor, his roommate Lance, hipster Pizza Guy and hot British chick, Emma. Are more cats going to be added to the main group?

Issue #6 introduces a couple of characters who may or may not be sticking around for volume 2, and #8 introduces a brand new character who has been with us from the beginning. That confusing sentence will make sense as soon as you read #8.

Issue #6 comes out on ComiXology today, and it takes us from the depths of a well and into the vast unknown. Which is more dangerous, saving Timmy from a well or deep space travel?

As cars, monsters, dumpsters and trash receptacles can surely attest, Trev’s possession of the Crystal Fist makes everything dangerous.

Emma seems to fit right in with these Knuckleheads. Will her sketchy past be revealed? When will she decide to move on from the team and go back to whatever she was doing before?

Someone from Emma’s past will definitely surface later on. She’s enjoying her time with these guys right now so she’s not going anywhere so long as they keep her entertained. 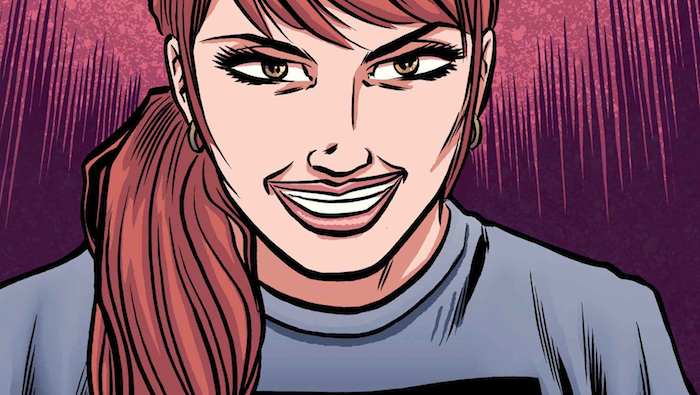 Trevor’s not exactly a terrible person, but may have some hygienic and motivational issues to work out not that he has ‘great power’ in the ‘palm of his hand’. What ways can Trevor improve his life? Yoga? Raw food diet?

To date Trev’s lived a life with few obstacles which has led to his slovenly nature. It would definitely take a drastic lifestyle change for him to reassess his trajectory, and that just might happen in the near future.

How did you hook up with your amazing art team?

Buck Berlin at New World Comics in OKC (where I live) introduced me to Robert in 2009, and we created Knuckleheads together almost immediately.

Robert discovered our colorist Jordan online and it was just happenstance that he’s a fellow Okie (he was living in Georgia but has since moved back to Norman, OK). And our German letterer Thomas is a member of Team Popgun, the Image anthology series where my first comics work appeared. Robert, Jordan and Thomas have recently collaborated with Dallas writer and Twitter darling Ken Lowery for the book Like A Virus.

Did you enjoy the new Godzilla? Were you thinking about how the Knucklehead team could have dealt with the bomb and M.U.T.O. in the movie?

Man, I really wanna see it but I haven’t had the chance yet. I’ve got two kids (11 and almost 6) so most of the movies I see are Pixar what-not, but I’ve heard enough good things that I want to see the new Godzilla big. I saw Pacific Rim in IMAX 3D last year and loved the crap out of it. 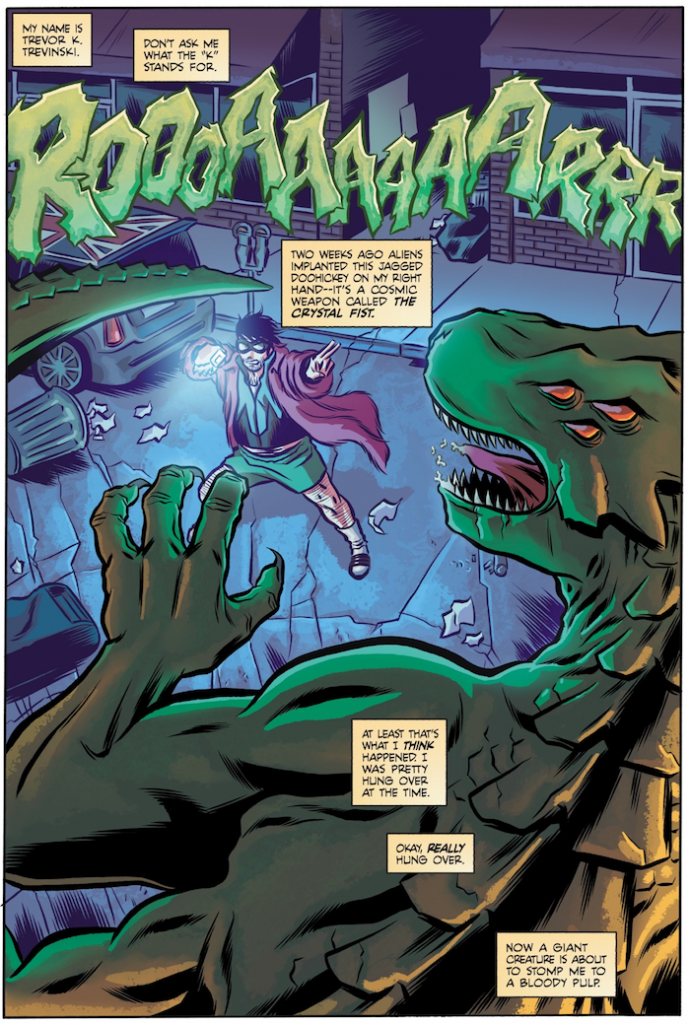 MonkeyBrain makes this comic happen in the ComiXology and digital world but we understand that some people are actually reading trade paperbacks these days. Care to tell us about the collected edition at IDW came to be and when can we get it? 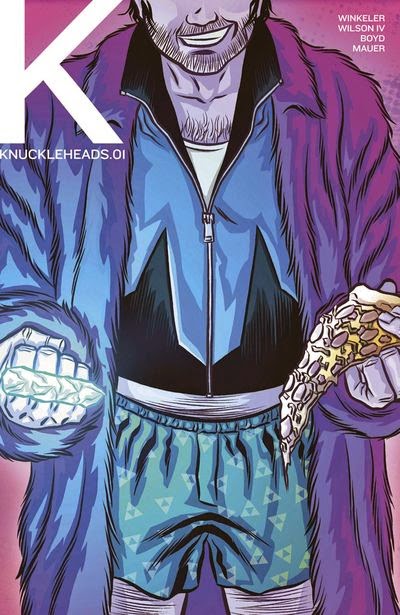 I met an IDW editor at San Diego Comic-Con last summer and talked to him about Knuckleheads.

Since we’d been vetted by MonkeyBrain, they were interested in releasing the print collection titled Knuckleheads: Fist Contact, which we’ve timed to come out for us to promote at Comic-Con this year.

The release date isn’t solid yet but it’ll be in July, and it will include an extra short story by artist Joe Hunter and a bunch of Robert’s sketches and process pages, as well as a nifty intro by our comics friends Corinna Bechko and Gabriel Hardman.

Keep the pop culture riffs going, please! And we loved the dog issue in #6. Was this a blatant cash grab, going after the mainstream Hawkeye audience like oh-so-many Redbox knockoffs like The Starving Games or White House Down? You Hollywood types have to pay for your mansions somehow, I guess.

Actually, as I note on our Knucklefriends letters page, it’s a blatant homage to the aforementioned Gabriel Hardman’s MonkeyBrain book Kinski, which is why the dog is named Herzog. Also, as Trev comments, rhymes are fun.

But, hey, if it pushes more books, I’ll write dogs on every page from now on.

Thanks, Brian! Let’s catch up when Vol.2 comes rapping at the door!

It’s a date! I’ll let you know when work will begin on Knuckleheads: Fist and Furious.