Victimized teens with super powers have a long history in horror film.

I WAS A TEENAGE WEREWOLF and I WAS A TEENAGE FRANKENSTEIN (both 1958) are usually considered the first.  But Brian De Palma’s adaptation of Stephen King’s CARRIE (1976) has remained influential to this day.

Unlike 70s horror predecessors such as THE EXORCIST and THE OMEN, CARRIE focused on teenagers rather than the adults.  And unlike the 1950s predecessors where the antagonists were adults trying to control teenagers, CARRIE’s antagonists were teens themselves – teasing and bullying the unfortunate heroine.  (True, Carrie’s mother wasn’t exactly a help to her daughter, but Carrie’s classmates were the instigators at the climactic prom.) 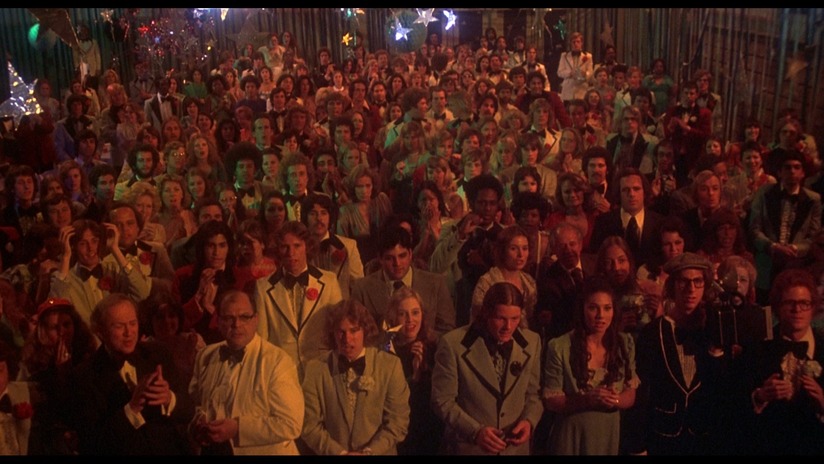 What happens when we focus on teens?  We get a greater sense of uncertainty.  Supernatural powers in teenagers seem scarier, more unstable, more likely to explode out of control.

CARRIE also had a different sort of construction from its predecessors.  Rather than a three-part story or an episodic story, it was a crescendo: a slow buildup to an insane climax (actually a two-part climax which made it even more insane). 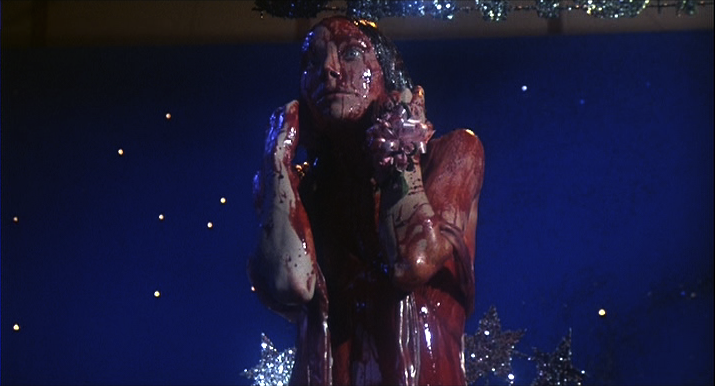 CARRIE also had a jolting coda, imitated most famously in FRIDAY THE 13th, but in many other places too, including De Palma’s own DRESSED TO KILL. 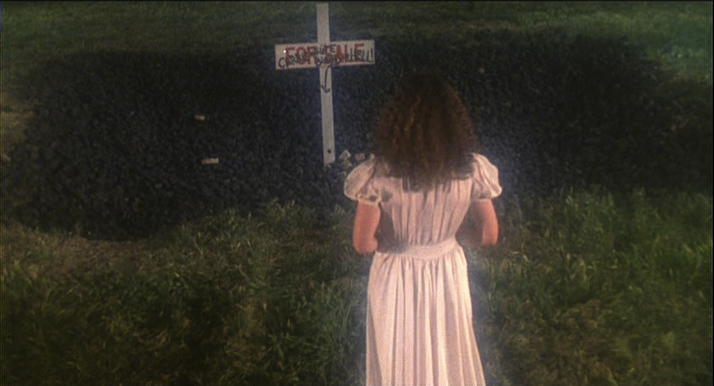 Given how much could be done with these elements – the variety of powers a teen protagonist might possess, the variety of school settings, the variety in family members or friends – it’s not surprising that CARRIE would spawn many imitators.

For the purposes of this article, I’m leaving out the 1999 sequel and the 2013 remake.  I’m looking just at the movies released through the early 1980s that obviously owe debts to CARRIE for featuring teen protagonists with psychic or supernatural powers who strike back at their tormentors in massive anger.

I’ve written more about each of these films in my Claws & Saucers guidebook, but I hope you’ll enjoy my comments, comparisons, and links below. 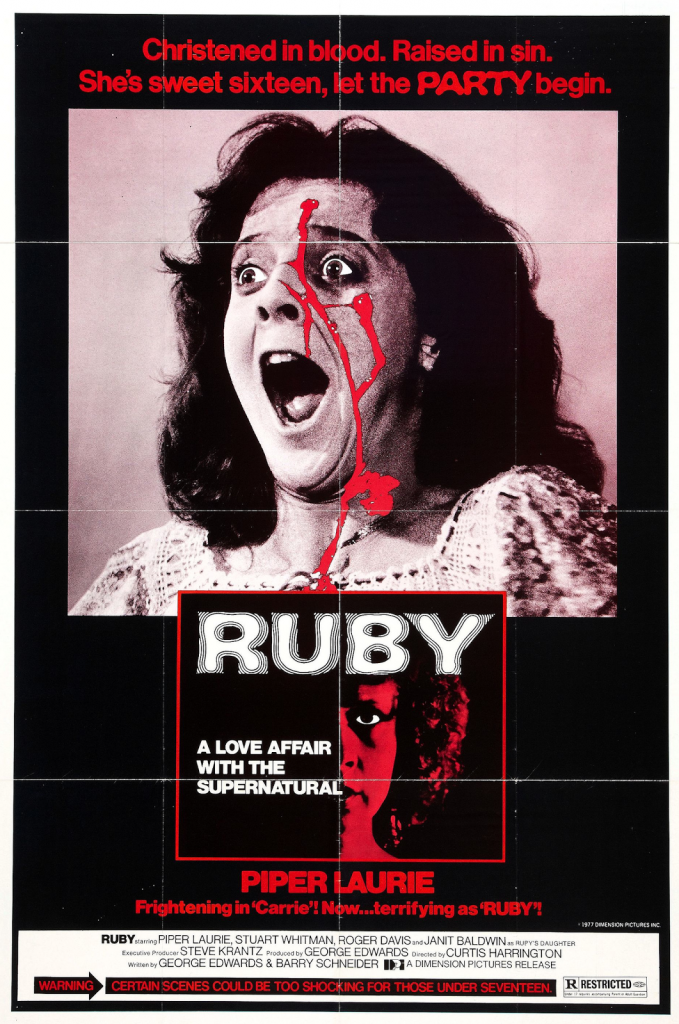 This one’s not really an imitator, but it deliberately uses a girl’s name for a one-word title, and it features Piper Laurie who played Carrie’s crazed mother a year earlier.  It does feature a supernatural girl character, though the character is a ghost.

Why watch it?  Well, it features several creative and gory deaths.  And it features unintentional camp: though set in 1951, a movie theater is showing ATTACK OF THE 50 FOOT WOMAN – which really came out in 1958. 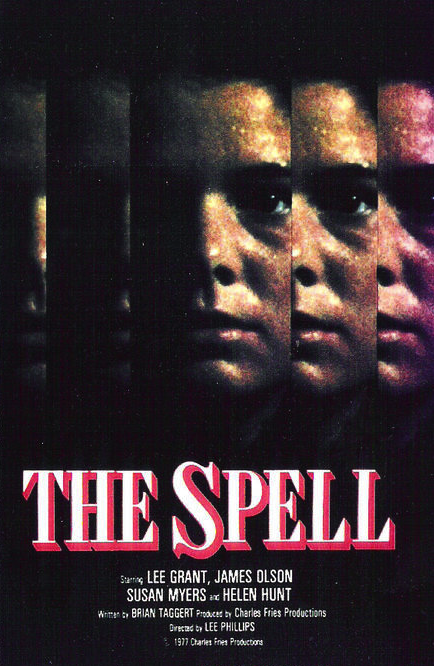 Like several other imitators, THE SPELL was made for TV.  It’s notable for reversing the mother/daughter relationship from CARRIE: here, the mother is sympathetic and the psychic girl unsympathetic .

The girl mostly attacks her family members, and the whole production feels more like a drama than a horror film, but all the performances are strong.  Adolescent Helen Hunt plays the psychic girl’s younger sister. 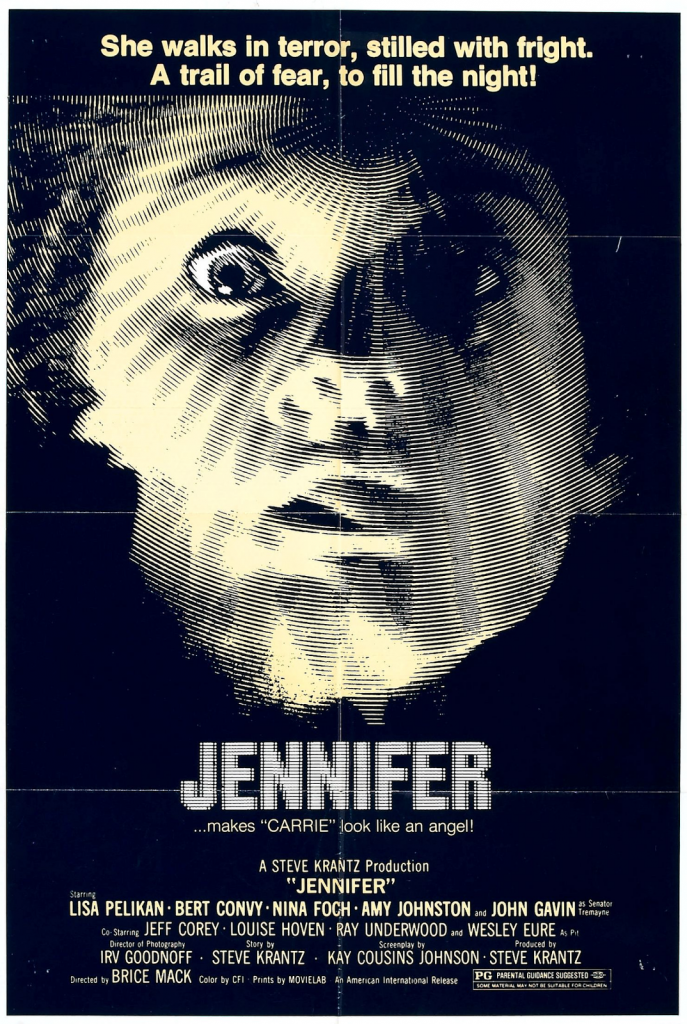 Here’s the first of the imitators that I’d really recommend.  Instead of possessing telekinesis, the ostracized teen protagonist can control snakes, including giant ones.  Her father is the religious fanatic parent instead of her mother.

In a fun twist, her father actually encourages her to use her powers.  Perhaps he sees snakes as phallic symbols that substitute for real guys?  The snakes should have gotten more screen time, but the picture is still good. 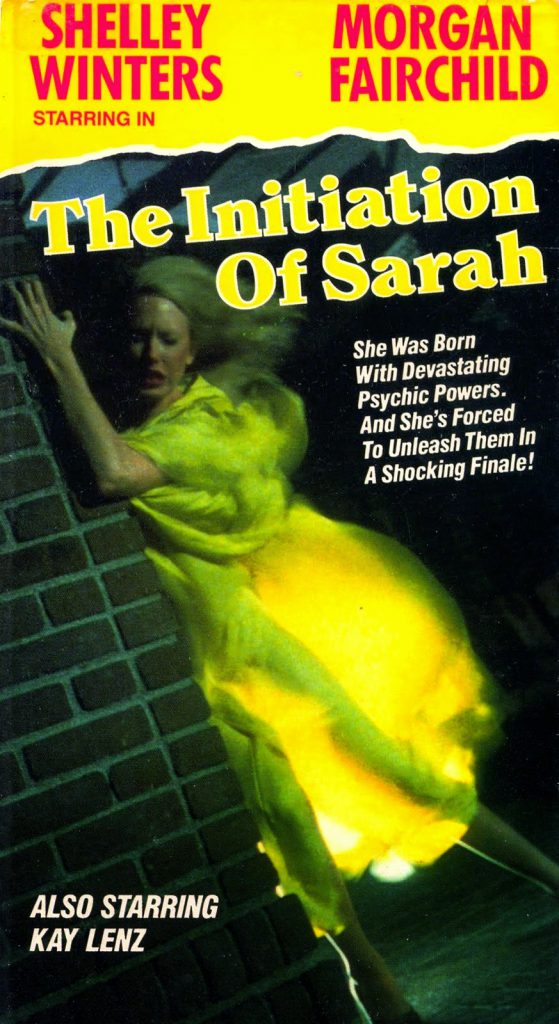 Now we’re talking.  Here’s the best of the imitators made for TV.  The excellent cast includes Shelley Winters as a surrogate mother who encourages, but also attempts to control, the psychic teenager Sarah at college. 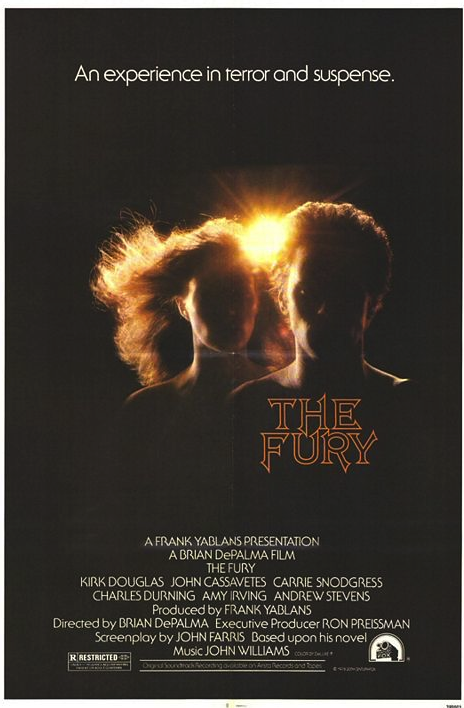 Does this one count?  It’s De Palma’s own follow-up to his acclaimed film, though here the single parent (the teen’s father, played well by Kirk Douglas) tries to help rather than stifle the psychic girl.  Actually he needs her help to rescue his psychic son – kidnapped by malevolent criminal agents.

Like CARRIE it’s a crescendo, but it’s more restrained and more realistic at the conclusion.  It’s a little long, but I like it at least as much as CARRIE itself. 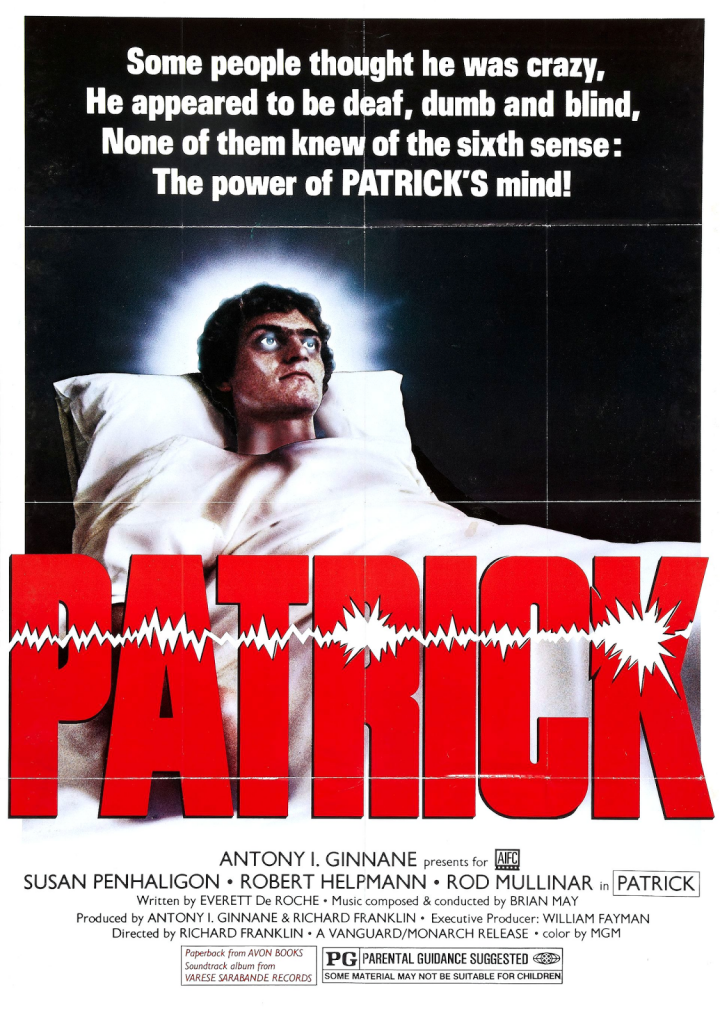 This strange Australian horror-thriller takes several obvious bits from CARRIE – the psychic teen, the title named for the protagonist, the bad mommy, and the coda.

But the plot is wholly different, as the teen is paralyzed and prone for nearly the entire story.  His telekinesis allows him to manipulate electricity as well as solid objects.  He defends himself against some doctors and nurses who neglect him.  But what happens when a new young nurse starts treating him kindly?  It’s an uncomfortable but unique viewing experience. 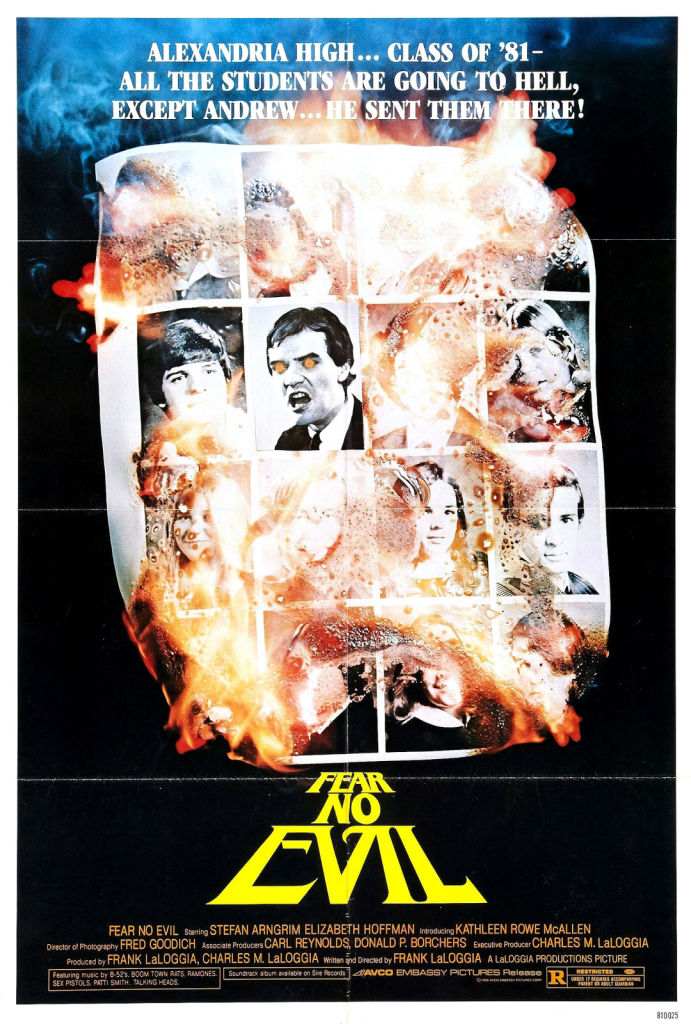 Because it’s also inspired by THE OMEN, FEAR NO EVIL features a psychic teen who is (1) a guy, and (2) pretty darn evil.  You root for the guy when he zaps his high school bullies, but you sense that his dark side is growing out of control.

The film gets bizarre in the final third.  A boys’ shower scene is almost as explicit as its girl shower precedent in CARRIE.  The religious element that was a sub-theme in CARRIE becomes the central theme here. 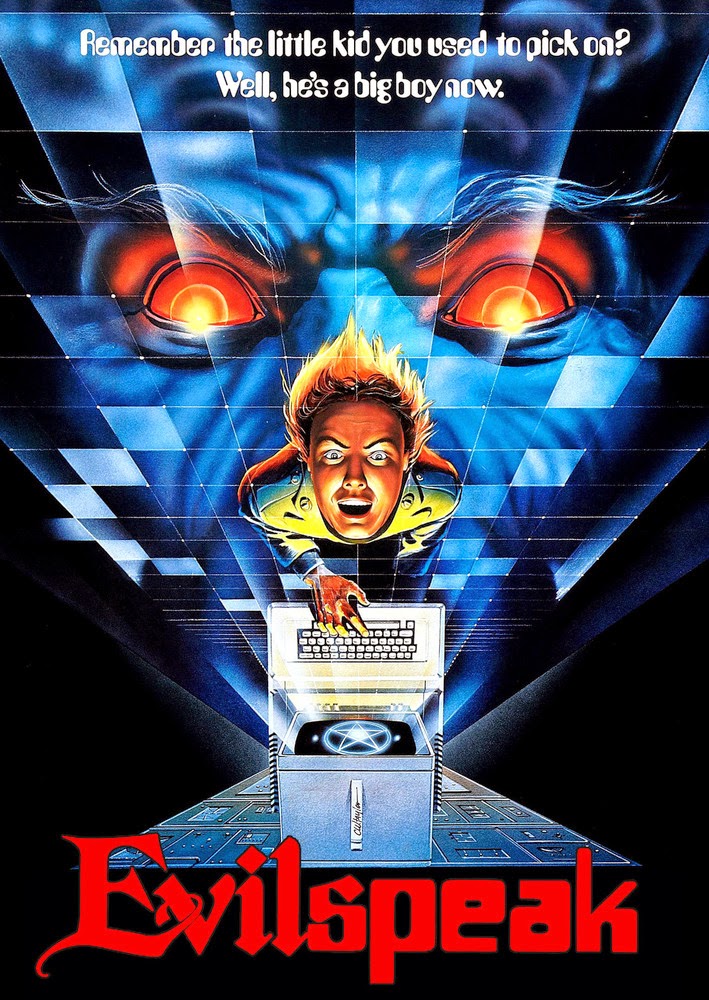 Here’s an 80s twist to things: the ostracized teen’s powers are digital rather than supernatural.  Again the teen is a boy (as in FEAR NO EVIL or PATRICK), though here he attends a military academy rather than the usual suburban high school.

While the picture is nearly 90% buildup, the climax is worth the wait – as long as you enjoy watching teen bullies run screaming from a pack of satanic carnivorous pigs (!). 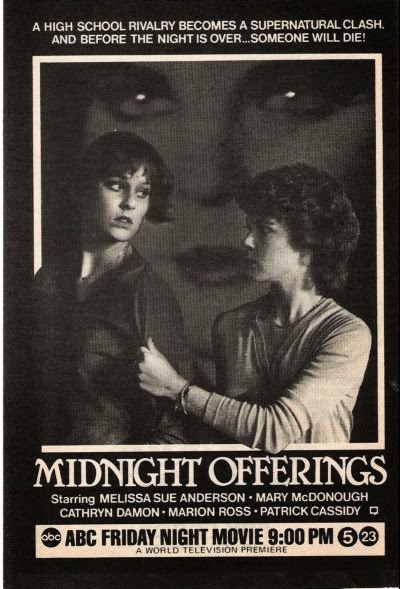 Why were so many CARRIE imitators made for TV?  Was it an attempt to appeal to young teens who might have been refused entrance to R-rated movies in theaters?

Whatever the reason, MIDNIGHT OFFERINGS is another good one, and it has a great twist: it’s not just the protagonist but also her rival who is psychic.  The two must fight a telekinetic duel.  We root for the good girl, but we actually spend more time with the villainess in this well-written production.