It’s becoming more and more difficult for writers to put their own spin on superheroes.  As a genre within comics, they’ve been torn apart, examined and put back together over the past several decades that at this point, there’s very little that feels fresh.

Co-written and co-created by Kyle Higgins (formerly of Nightwing), with partner Alec Siegel and artist Rod Reis, C.O.W.L. is not only one of the best looking books I’ve seen in recent memory, but the first issue lays down the foundation of an exciting period of great change, as a metaphor for the evolution of the comic book industry that also occured at the same time period.

Kyle was generous enough to talk to FOG! about the series and it’s origins.

FOG!: C.O.W.L. has been spun out of your college film short, The League, and both focus on the 1960’s superhero labor union in Chicago.  What was the genesis on this take on the genre?

Kyle Higgins: Originally, the concept for a labor union of superheroes was something I was developing as a satire.

When I was transferring to Chapman University, I needed a writing sample to get into the Film Production program, and thought this would make for a good prompt. It was only after I got accepted, and started sound designing one of the thesis films that year (spring of 2006), that I decided to circle back on the idea and develop it with a more serious tone. 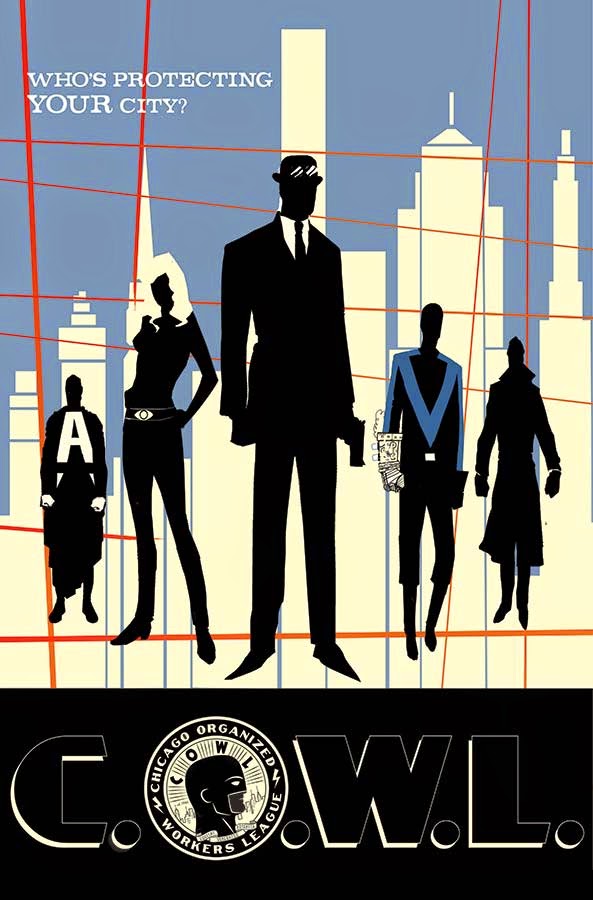 A focus on the 1960’s, which was a big time of change for America– not to mention the comic book industry– gave me a new perspective on the concept. Labor unions in the 60’s and Chicago’s political machine worked really well as a backdrop and seemed to bring out a lot of the moral and ethical questions in a way that didn’t feel tongue in cheek.

You and co-writer/co-creator Alec Siegel wrote The League together in college.  Was it always the plan for you both to break into comics and also bring C.O.W.L. to life as a comic series?

It wasn’t, no. I’ve read comics my entire life, but they were never something I thought I could do. To be honest, even though I’ve written stories for as long as I can remember… I never thought of myself as a writer. I only started writing more seriously in high school, and then at the University of Iowa, so I would have material I could direct. 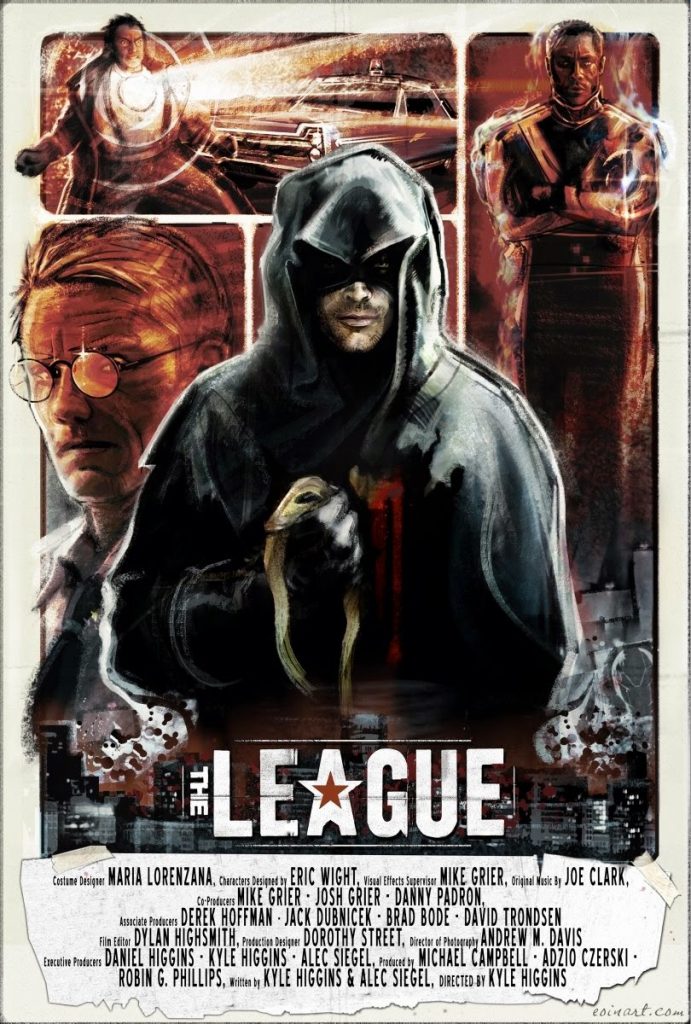 That said, when Marvel saw The League and offered us a chance to pitch, there was no way I was going to turn it down.

Rod Reis’ art in the first issue is fantastic, and for me felt like the spawn of Phil Noto and Bill Sienkiewicz.  How did you hook up with Rod and what do you think he brings to the series?

That’s a great comparison. Rod and I met on Nightwing, actually. He colored the first sixteen issues of the series. I tend to be pretty involved in the coloring process– it’s actually my favorite part of making comics, having come from a film and photography background. So, when Rod– who’s colors I really liked– started showing me water color commissions, I asked if he’d ever considered trying sequentials. That lead to a little eight page story he and I did together, which then set up C.O.W.L.

If you’re going to a creator owned comic– especially if it has anything to do with superheroes– it’s important for it to be visually unique. Rod brings that in spades. I can’t wait for people to see these pages. His storytelling, design, and rendering, are all fantastic. The book looks amazing. 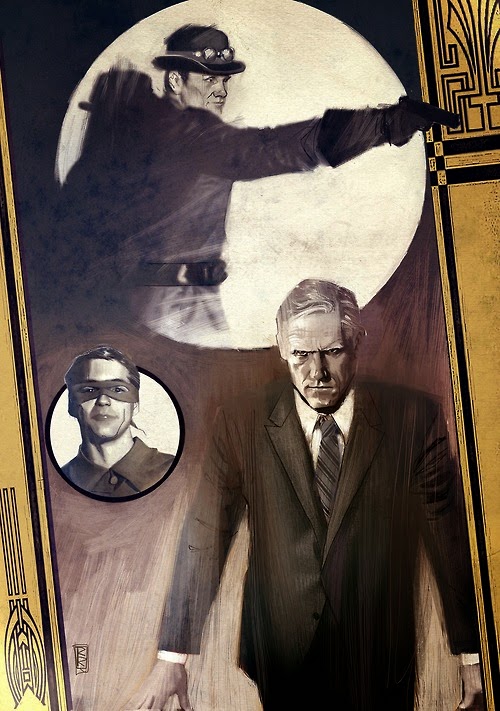 How much of the C.O.W.L. universe/timeline has been set up?  Is the series set only in the sixties or are there plans to flashback and flash forward at all?

A lot. Alec and I are both big world builders. We’ll be exploring the past, definitely. Stay tuned for a pretty cool announcement for issue 6, in fact.

You’re also part of the writing team for the weekly Batman Eternal series.  What has that experience been like and what have you learned as a storyteller by collaborating with other writers?

I don’t know that there’s anything specific to the Batman Eternal experience, but I learn from everyone I work with– artists, colorists, letterers, editors, other writers. On Eternal, all these guys are my friends, so it was a pretty warm environment to step into. To be honest, had it not been the group that it is… I probably wouldn’t have taken the job.

Why should people check out C.O.W.L.?

I would say if you’re a fan of shows like Mad Men, Game of Thrones, The Wire, you’re going to enjoy C.O.W.L. a lot.

We’re interested in telling stories about characters who change– that’s one of the biggest draws of doing a creator owned book. The journeys we’re putting these people on are could only be done in an environment where we own what we create.

Oh, man… that’s a tough question. Movies wise, I’m on a big Criterion kick lately. Anatomy of a Murder, Ace In The Hole, The Spy Who Came In From The Cold. For comics, I’m– not surprisingly– reading a lot of Image. That’s where my favorite books are coming from. East of West, Pretty Deadly, Velvet, Black Science, Deadly Class, Southern Bastards… it’s a good time to be a comic fan! 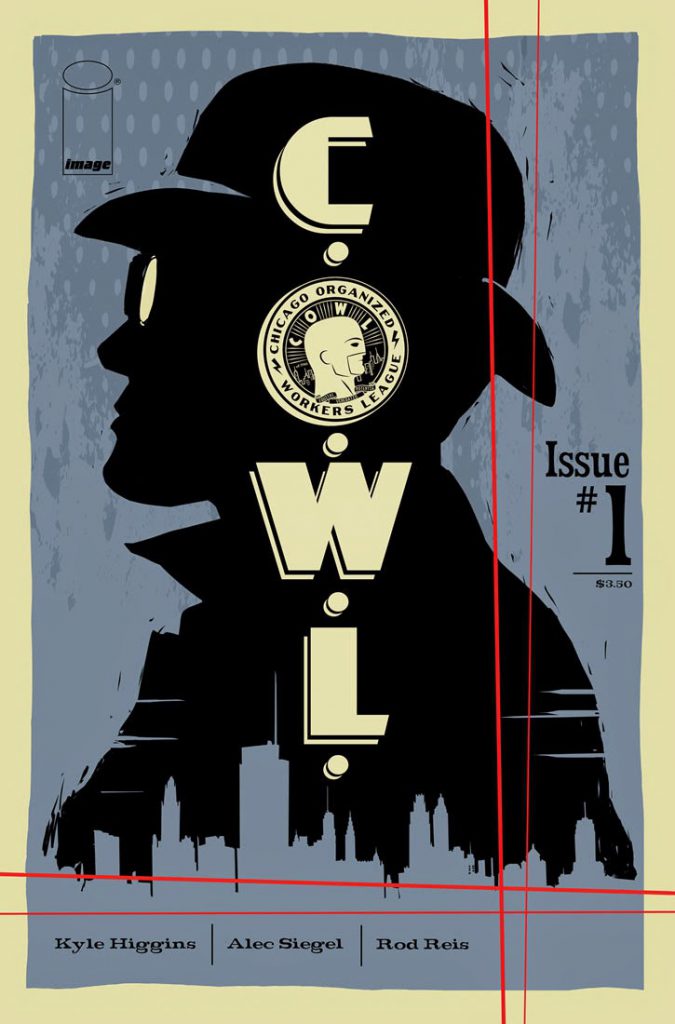 C.O.W.L. Arrives in Comic Stores on May 28th From Image Comics.