The Forbidden Zone is an assault on your eyes and ears in the best way possible.  It’s an amazing film that belongs in every cinegeek’s video collection.  A science fiction musical with performances by the Mystic Knights of the Oingo Boingo (which included Richard’s brother, composer Danny Elfman), the Forbidden Zone was inspired by Fleischer cartoons, Flash Gordon serials and Cab Calloway performances.  And for anyone who loves film, it’s truly something to treasure.

And I’ll give you ten words that make an argument against that statement futile:

Hervé Villechaize as King Fausto, ruler of the sixth dimension.

Now, almost 35 years later, director Richard Elfman is putting together the long awaited sequel, Forbidden Zone 2 and needs your help.  With an Indiegogo campaign ending this weekend, there’s still time to support the project and if you never saw the first one, it’s available as one of the many rewards.

Richard took some time to chat with FOG! about the campaign and the sequel.

For those unfamiliar with the magic of the original film, what was the Forbidden Zone?

(My brother) Danny and I had a musical/theatrical called the Mystic Knights of the Oingo Boingo, which eventually evolved into a smaller rock band called Oingo Boingo. I wanted to put on screen what was essentially our stage show–hence Forbidden Zone, an outrageous, absurdist musical comedy.

Why now, after thirty years, are you prepping a sequel?

Well, I’m rested now. Also, the original has been pretty much like the Energizer Bunny and attracted a new generation of fans–who are asking for a sequel. And I’m in the fucking mood to let my balls out and breathe some fire.

I remember the first time I saw it, a friend of mine simply handed me a VHS tape and said, “this was made for you”. The original Forbidden Zone was surreal and innovative and an amazing amalgam of pop culture of the past. Are your influences in the sequel from the same period, or are you moving into conventions of the fifties and sixties?

Forbidden Zone 2 will have a similar tone to Forbidden Zone. All fantasy sets, no real time period. Our “Crenshaw” saloon will look like Harlem 1910, the classroom has everything from twisted Little Rascals to modern zombies.

What can you tell me about Forbidden Zone 2?

My son and daughter-in-law, Bodhi and Jenna Elfman, will each do multiple roles. Jenna, a trained professional dancer, will do a comedic aerial ballet choreographed by Shana Carroll (Cirque du Soleil). Jenna will also play a wild “Rocky Horror-esque” trannie school teacher—Danny is writing her a showstopper! And our 88 year-old mother will pull the King’s chariot–she’s training right now at the senior workout center. 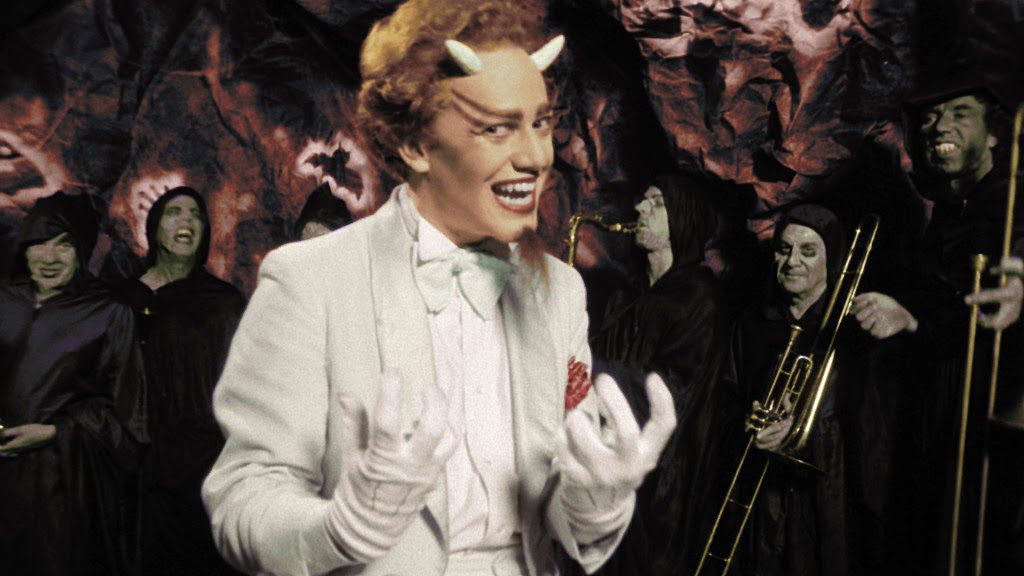 Right after the Mystic Knights I directed a stage play–with top symphony musicians from the L.A. Philharmonic–of Stravisnky’s L’Histoire du Soldat (History of a Soldier). Besides directing I also played the devil in the production–the play won Best Production award by L.A. Drama Critics Circle. So I had the devil in mind when we did Forbidden Zone. Danny’s the better singer than I am! No devil in Forbidden Zone 2, but Danny and I are discussing other roles–the little devil!

You’re financing campaign on Indiegogo ends this week. What should fans know?

To do anything really different and original in Hollywood, you have raise at at least part of the budget independently. The campaign is going very well, I am so grateful for the support. We are going till this Sunday. Supporters all get something in return, of course, unique limited edition DVDs, posters, shirts, they can even be extras in the film and become Mystic Knights of the Forbidden Zone.

How do people find your Indiegogo campaign?

Finally, what’s a nice Jewish boy like you doing in the sixth dimension?

How the fuck do I know? But I like it!