Welcome to the tenth installment of Flashback to the Present.  I’ll be your contributing writer, Charles Knauf.

Southern California is having an unseasonably warm streak of weather that has been taking me back to days of yore; if you will, the salad days.  A time where the most one has to worry about is looking cool at the arcade, who’s mom will drive them to the beach, and if one has enough change for a Slurpee at the local 7/11.

In other words, summertime.

Like a lot of kids, my fondest memories of summer came from summer camp.  I, for example, spent many a-summer at Camp Arawak; a plucky little spot that had plenty of fun activities and a great canoeing program.

Heck, I even shared my first kiss with a cute girl named Angela.  Angela didn’t really talk much, but there was something about the way she would carry herself that got my heart racing.

I wonder what whatever happened to her…

Moving on, this entry for Flashback to the Future is going to be about a television program that I remember watching as a kid and really enjoyed: Salute Your Shorts.

Salute Your Shorts was a children’s sitcom on Nickelodeon about a summer camp (Camp Anawanna) and a group of kids forced to spend their time under the thumb of the counselor in charge, Kevin “Ug” Lee (Kirk Baily). 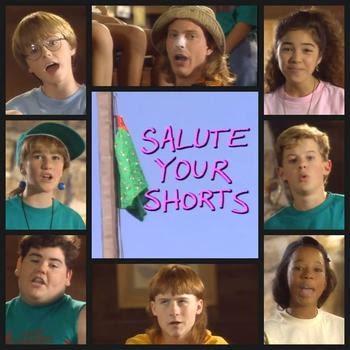 It was on for two seasons, and focused on the misadventures of a scrappy group of young teens divided into two cabins, dealing with both typical and atypical teenage problems.  It was like a teenage Hogan’s Heroes, without the ever-looming uncomfortable knowledge that the protagonists were Nazis. 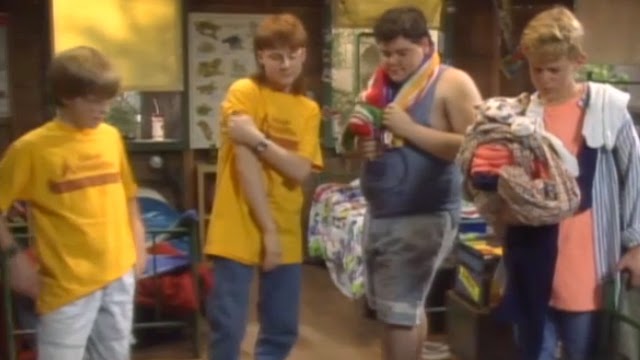 In the other cabin were the girls; Z.Z. Ziff (Megan Berwick), Telly Radford (Venus DeMilo), and Dina Alexander (Heidi Lucas).

I always though Z.Z. was the cutest.

Premiering in 1991, Salute Your Shorts was a part of Nickelodeon’s original content push.  Other shows to join this content block was Clarissa Explains it All, The Adventures of Pete and Pete, and Hey Dude. Like many of these early shows, Salute Your Shorts had a miniscule budget for fear of failure.  It did, however, have a surprisingly large amount of location shoots – something you don’t really even see today with children’s programming.

The interesting thing to take note, however, is the fact that these shows were all pretty well written and executed nicely.

As short lived as it was, Salute Your Shorts still holds up today as an entertaining program.  You could almost look at Nickelodeon’s moves in the early 90’s as similar to what HBO was doing in the late 90’s; going against the grain and producing shows based on story, not popular trends.  In other words, Nickelodeon was taking some big risks putting money down on something that was the polar opposite of what was popular at the time.

To put this into context, pay attention to my article on Perfect Strangers and the TGIF lineup.  What ABC did was make the blandest entertainment known to man because it was meant to appeal to everyone and, hell, it worked; the numbers don’t lie.  Nothing was done on those shows without testing and careful trend charting.

However, Nickelodeon had a 10% of the budget but managed to make stuff that still holds up today.  There’s a reason people watch old episodes of Full House for the hipster irony but love talking about Salute Your Shorts, the “awful waffle,” and Zeke the Plumber.

Salute Your Shorts was a fun show that can be purchased through various online marketplaces.  I would highly recommend grabbing some booze and checking them out – you won’t be disappointed.

Now if you all will excuse me, Angela got in contact through the Facebook Camp Arawak page. She wants to go camping and tell me a big secret.

Cross your fingers and hope ol’ Chuck gets some action this weekend!

In this article:90s, Nickelodeon, Nostalgia, Television, Written by Charles Knauf