Today I pour one out for another geek show that, for me, was gone too soon. ABC canceled Super Fun Night late last week.

The show had some geek pedigree: Rebel Wilson starred in it, and Conan O’Brien was an executive producer. Super Fun Night wedged in a Xena parody and musical numbers alongside allergies, hardcore Halloweening and nontraditional sports.

But I guess it just wasn’t good enough for the wide slice of American viewing public typically needed to keep a show on a major TV network.

It also didn’t help that a seriocomic show targeted at twentysomethings and early-thirtysomethings was running after the (really, really good) comfort food that is Modern Family. You could argue that ABC killed off Super Fun Night in the same way it killed Happy Endings by not giving it a fitting time slot and not having a strategy for how to create blocks of programming that pulls in the young viewers SFN needed.

You also could convincingly argue that despite the refreshing presentation of sitcom characters that were the closest to real people you’ve seen in a long, long time, the lack of structural elements that make a good TV show – voice, plotting, etc. – also killed the show.

But I come not to bury Super Fun Night, but to praise it for what it did and attempted to do.

I praise SFN for bringing Rebel Wilson to American network TV. Yes, we got her using an American accent. Sure, we had to see her in breakaway clothes a few too many times, to the point where it felt more like we were laughing at Kimmie Boubier than with her. (But – for real, though – please and thank you for the bra with blinking neon hearts across the boobs.)

But what was the toughest part of all in having Rebel Wilson star in this show is how much Wilson wasn’t playing herself. Well, her showbiz self. Not in that playing-against-type kind of way, either, but her showbiz persona that made us like her.

Her name is Rebel, which fit her persona to a T – brash, super-confident, boisterous, turning any perceived weakness into a weapon. Pitch Perfect introduced her character calling herself “Fat Amy” … “so twig bitches like you don’t do it behind my back.”

Add her frequent shooting down of Adam Devine’s fevered come-ons, and Wilson flipped the script on the comedic traditions of the fat girl as unlikely man-hungry sexpot.

Unfortunately, SFN saw Wilson doing the exact opposite. As Kimmie Boubier, Wilson played a young woman in arrested development because of a psyche forged by traumas stemming from her weight and her geekitude.

It was tough to watch Wilson perform this role because it’s not the brassy persona she has crafted. The good sitcoms, more often than not, are built around using the qualities of the star’s persona to push the show forward and to make people watch.

You can’t divorce Bill Cosby from Cliff Huxtable, Tina Fey from Liz Lemon, Ty Burrell from Phil Dunphy, Lucille Ball from Lucy Ricardo, Jim Parsons from Sheldon Cooper, Roseanne Barr from Roseanne Arnold. There’s an essence of each performer’s stage personality that makes audiences connect. Super Fun Night deprived us of that from Wilson, and it was a big risk.

It also was a refreshing risk, as Kimmie, Helen-Alice and Marika were all female characters we’ve seen be the punchline of many, many shows – the fat girl, the virgin and the lesbian, each of them alternating between nerd, geek, dweeb and dork – but pushing them to the forefront in order to unpack the stereotypes and insert some real-talk humanity into them. 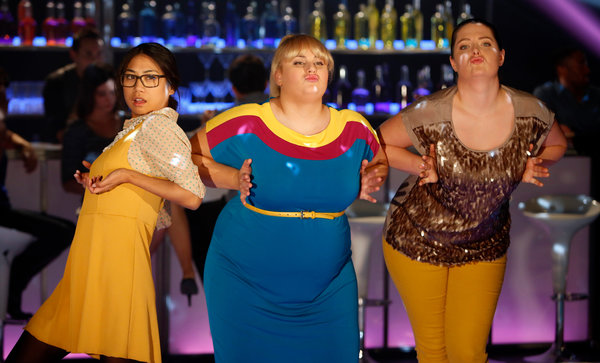 What was billed as a laugh-at-the-nerds show quickly showed its serious sides, with the anxiety, heartache and loneliness often at the heart of many young nerds’ lives.

I praise Super Fun Night for showing not only that it’s hard out here for a nerd, but it’s even harder for a nerd girl. Despite her accomplishment as a corporate lawyer, Wilson’s Boubier had so much trouble consistently prizing her own worth and instead looked to validation from others tied to her perceived and experienced lack of desirability.

The ideal of feminine desirability, and who gets to participate in it, can strike the nerd girl in a particularly pernicious way. I’ve seen the beauty-glamor stuff cast aside or avoided as something beyond the nerd girl’s ability – an internalized expression of external messages solidifying one Western beauty standard combined with limiting ideas of gender in which the nerd girl may not fit.

From the fashion and beauty industries and celebrity culture that marginalizes and excludes, to the unrequited loves and rejections of boys and men, to insecurities incubated by mothers or inequities of girls instituting their pecking orders, I’ve seen it bear down on many the nerd girl. An episode where we meet Kimmie’s mother and sister, with the shaming, outperforming and insecurities shared among the three Boubier women, shows that clearly.

Whatever exclusion a nerd boy may have, a nerd girl can have tenfold. Sexism still will work in the nerd boy’s favor, as we’ve seen in the tech sector, in the sciences, in the arts. The nerd herd is often thought of as a boys’ club, and TV shows and films depicting nerds have followed suit almost exclusively.

Even when they bring in the nerd girls, they usually are depicted as more outwardly “together” than the boys. And by “together,” I mean still following conventionally attractive looks and fashion, such as Melissa Rauch’s Bernadette Rostenkowski on The Big Bang Theory and Emily Bett Rickards’ Felicity Smoak on Arrow. They’re given a conventional-looks sheen to their awkward-nerd characters in a way that makes me sound like one of those mansplaining “real nerd” idiots. (I shudder at having to stare into that Dark Side.)

But on Super Fun Night, there wasn’t as much glamor. The show depicted its main characters as the flipside of the nerd-boy man-child: the nerd-girl loser-woman.

Super Fun Night had all these threads sewn into its DNA, even though the parts weren’t served well by a structure and story arcs that best served those pieces. The broad slapstick comedy bits in a single-camera show without a laugh track or live audience didn’t gel with the many small moments of characters being bizarre.

The comically-big items of mean-girl Kendall’s one-upsmanship careened from over-the-top cruelty and underhanded showiness that you see women do to other women in order to bring them down for being better (i.e. more desirable) than them. And then, after all that, showing how the pretty, skinny Kendall is trapped by the same system of social expectations as a bird in the gilded cage, and that her underestimation of Kimmie by weight and nerdiness did nothing but work against her.

Or the nerd-girl obsession over men with English accents (et tu, Mindy Project?) pushed Kimmie into falling in love with her best friend/boss Richard, “settling” for perfect-boyfriend James, then still running after Richard, but still not getting him by season’s end.

But then I think of watching Kimmie letting go of her insecurities to pave the way for a love triangle and the silliest fantasy sex sequence this side of Anchorman. Or Helen-Alice no longer fearing germs and, therefore, sex and emotional involvement. Or Marika finally understanding that, yep, she’s gay.

Each one starts to find a little bit of their own happiness by truly serving themselves and walking away from the past that forged them in order to exploit their true potentials and reach out to the futures awaiting them.

In other words, they started growing up, nerd-style.

For the nerds, growing up often means leaving behind some things that made your identity and psyche. It’s knowing that who you were in high school doesn’t dictate who you are in the rest of your life.

It’s knowing that some pieces of that nerd identity, crafted from extreme devotion and enjoyment as well as forged from exclusion, loneliness and outsider status, can become a prison if stayed in for too long. It can lead to building an identity on rejection further marginalizes the self.

Perhaps many a nerd has to break themselves of such a cycle. I know I had to. Like the girls of Super Fun Night, like everyone else in life looking to make a change or to fulfill their potential, I had to dare. Who dares wins.

I don’t know who all watched Super Fun Night. Not for how many people, but which people.

I can only hope that they saw a fat woman embrace her own worth and gain the love and desirability she deserved as a full person, while also looking fabulous. (My wife wanted all of Rebel Wilson’s plus-size outfits on the show.)

I can only hope that more writers, actors and network executives see the door that Super Fun Night tried to walk through, and that they follow with more attempts.

I can only hope a nerd-boy and a nerd-girl out there saw a bit of themselves in those characters – including a future they can avoid, in order to craft their truest future selves.

And if that means blinking neon hearts on your bra, so be it.

At least you can say you were a Rebel.