As comics move from the spinner rack and the shelf to the phone and tablet, and controversial acquisitions have made the premier comics app for the iPad behave differently, companies are looking to deliver these books in new ways.

And Mark Waid has been one of the industry’s most vocal advocates for change and innovation.  And has every right to.

Waid has done everything in comics.

And those are just the broad strokes.

Mark joins us to talk about his company’s Thrillbent Comic Reader for iPad and an affordable monthly subscription model.

The Thrillbent website was started in 2012 to inspire innovation in the digital comics space, and Mark continues to be forward thinking with his new app and subscription model.

With a ton of great titles, Mark and Thrillbent are taking the comic market to new heights.

FOG!: Thanks for joining us today, Mark, hot off the heels of C2E2. How was the show?

​Mark Waid: Genuinely invigorating.  I have to say, I’ve not enjoyed Chicago comic conventions for a long time, not since my thousandth lame experience at the Rosemont Center, but these guys know what they’re doing. Wide aisles, good attendance, good guest lists…I’m a fan.​ 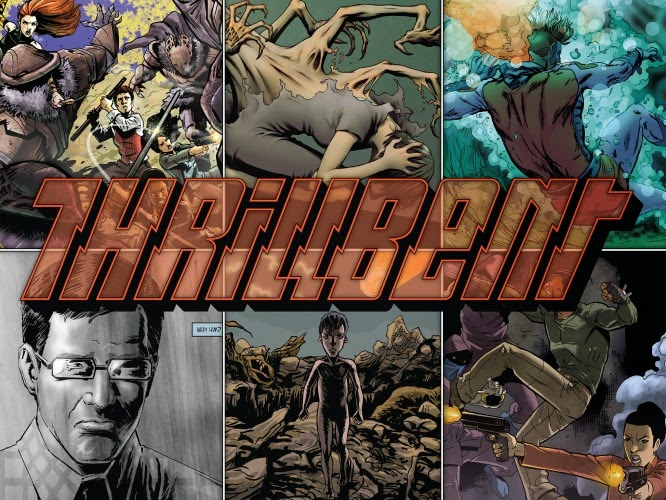 Just last week saw the launch of the Thrillbent iPad app. We’ve been following Thrillbent since the beginning. Was the goal eventually to get here, out of the browser space and onto tablets?
​
It was certainly A goal.

But I’m not really going to be satisfied until we can be in a place where you can access us through iPads, Chromecasts, Rokus, Android phones, everywhere.

What we appreciate most about Thrillbent comics from your own Insufferable to Tim Gibson’s Moth City is the redefinition of digital comics by the use of panel transitions, and a quasi-animation, do you think this works best on the tablet?

​Thanks.  Yeah, I do. I think comics for phones is, really, a whole separate ballgame, better suited to comics that are sparser in captions and dialogue and one panel per screen. We’ve got some things in the works, too.  Stay tuned.​

Does Thrillbent employ a team of programmers and coders to make this all happen, or are these unique digital comics transitions up to the writers and artists themselves to employ in their comic?

​HA!  “A team of programmers and coders.” You are a RIOT. Trust me, if we had that kind of money, we’d be pouring it into marketing and promotion. We DO have some amazing folks who have done spectacular things with the site and with the app, but the actual unique transitions and effects? Those come from the creators, and we’re constantly coming up with new ones.  That’s one of the niftiest parts of the job, honestly.​

The subscription model is only $3.99 for all-you-can read per month, with some options to buy DRM-free copies for your permanent digital collection. How did you come up with this number?

​It’s the price of one comic, pretty much. That seems like an inexpensive buy-in given that you’re getting at least three to four comics’ worth of material a month (and growing)–plus access to the 250+ comics chapters in our back catalogue.​

One of the books I’m reading on the app is The Endling. I likely wouldn’t have found this story anywhere else, and I’m enjoying it! Any other recommendations or new books coming down the line we can expect to see from Thrillbent this year?

​VERY excited about launching the long-overdue sequel to Empire by myself and Barry Kitson later this month (May 28).

Following that, James Tynion IV and ​Eryk Donovan are unveiling The House In The Wall, which is every bit as compelling and creepy as The Eighth Seal.

And, of course, The Damnation of Charlie Wormwood continues.

We have a BUNCH of roll-outs this summer!

By providing an alternative to, and not a replacement for, ComiXology and iBooks on the App Story for comic book consumption are you seeking to evolve and experiment with the app — or is it more simple, you just want these awesome independent comics in the hands of fans and future Thrillbent creators?

​HA! Both, honestly. Originally, Thrillbent was envisioned simply as an umbrella under which talented creators could share their work–but because we’re all playing off of and responding to one another, I’m finding that the spirit of experimentation is VERY strong!

Thanks for taking the time, Mark!  We look forward to letting everyone know about this exciting new chapter in the Thrillbent story!