I can’t get that dang Iggy Azalea song out of my head.

Not that I want “Fancy” to be, though. I’d rather the song not be in my head. I hope some other piece of pop fluff walks in and sweeps it away.

I don’t much enjoy pop culture that insults me. As a black man and a nerd, the mainstream does a good enough job of that already on both fronts. And now I have I-G-G-Why.

After a few years of hearing about Iggy in the online hinterlands of the hip-hop background, it makes sense that she has emerged now.

Now, in our pop music mixmaster of blockbusters prying up a dying record industry that has exhausted underground subcultures and transgression so thoroughly that it’s easier to sneakily uphold the power structure by watering down rebellion and disavowing history to create a cartoon.

And Iggy Azalea is a cartoon. She’s no more real than Woody Woodpecker.

That’s what I hear when “Fancy” plays. I hear a tall blonde white Australian woman contort her voice into a studiously assembled impression of a black American accent that feels more caricature than homage.

Some lighthearted critiques of Iggy Azalea refer to her rap persona as a hip-hop drag queen, calling to mind the overdrawn imitation hallmark to drag. But where drag is caricature bathed in love, respect and transformation in the face of oppression, Iggy’s act does not go there for me. What oppression is she overcoming by to-the-letter imitating black men and women?

She stands up there like Nicole Kidman, and then Lil’ Kim jumps out of her mouth while she walks around aping the styles of T.I. And Tupac Shakur. It’s like she’s some burnt cork shy of Al Jolson. 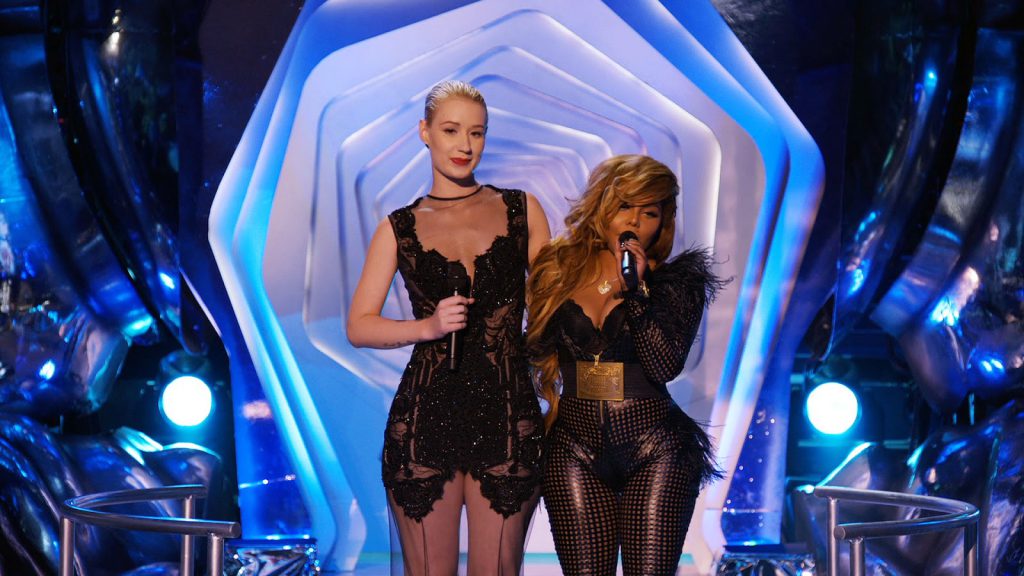 Of course the pop mainstream eats this up. The tradition of the record industry taking black acts and putting a white face on them is as old as the industry itself: from “race records” and Elvis Presley; to the blues and the British Invasion; to New Kids on the Block being created by New Edition’s former manager because he knew a white version of the all-black group would make more money; to Backstreet Boys and N*Sync hiring out R&B producers and songwriters; to Britney Spears being crowned the heir to Madonna even though she was copying Janet Jackson.

These days, hip-hop swagger has replaced rock and swallowed pop culture to the point that a late-night TV talk show host – one of the whitest, male-est jobs there is in America – gains millions of YouTube views doing karaoke rap with a pop star who built his career imitating black artists, while being backed by a rap band whose records his audience won’t buy.

But there are nuances and differences in the continuum of the dominant group latching onto a minority subculture for inspiration, ideas and profits. And for white artists working in traditionally black musical genres, it all comes down to one rule that is a key tenet in all of black music: Don’t fake the funk.

Key to DFTF is how soul music needs soul – that inimitable quality of vocal/instrumental power, delivery and performance that says something true is happening in this song. That makes you feel like the performer has wrung themselves out into the song. It makes you believe.

There are some differences between a white singer who looks to black singers as inspiration toward their own voice, and a white singer totally changing everything about their voice. DFTF.

There’s a difference between the whitewashed pre-Beatles American pop world, and the guys who appeared to be more open about their influences and giving credit to black musicians. I’ve read John Lennon say that The Beatles existed because of black musicians. I’ve seen Rod Stewart, Eric Clapton, Jeff Beck and The Rolling Stones pay alongside Buddy Guy, B.B. King and Muddy Waters. 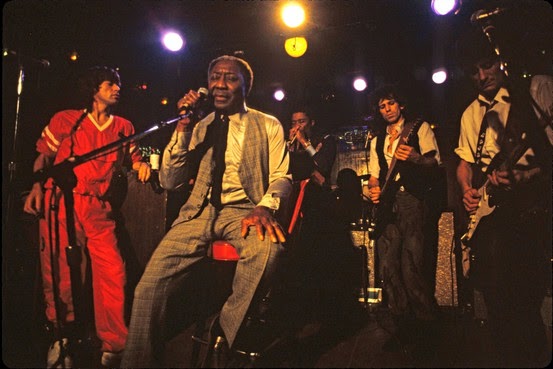 I can appreciate a white singer who is inspired by a black one and engages in some emulation in order to find their own voice. All great artists steal, right?

The fluttering falsetto of Boy George copied that of Smokey Robinson.

Mick Jagger set out to sound like Howlin’ Wolf, and Peter Gabriel’s shouts and tall-leap high notes are rooted in Wilson Pickett.

Amy Winehouse pulled from Dinah Washington’s vocal styling, the look of Ronnie Spector (who is part black), and the mournful swoons of Sam Cooke.

Robin Thicke harvested the licks and cadences of Marvin Gaye and Take 6.

Daryl Hall soaked in all that Philly soul.

Adele lacks the diva punch of Etta James, but you can hear her in that voice, along with black British singer Gabrielle.

But each one of these artists have made a voice that was their own, with their own soul. Even when they used the Afro-American Vernacular English and inflections running throughout soul music – the black accent, or blaccent.

Iggy Azalea fails DFTF for me because she’s all blaccent, no soul. Yes, she cops to her influences any minute, but she has to because she made up a dead-center black voice. She didn’t bend her Australian voice to incorporate some blaccent features. She went all the way. Or, too far. 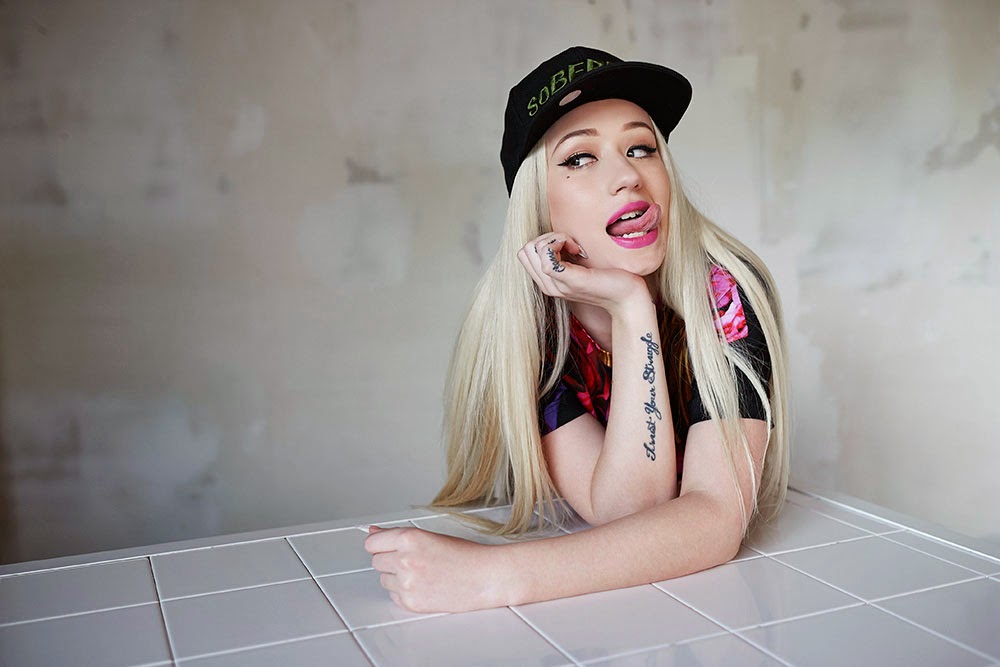 She then has to make up a stereotypical fake black voice. She poses in a magazine and talks all shrimps-on-the-barbie and then says, “Hold on, I gotta put my black voice on.”

Eminem studied tons of rappers, from Big Daddy Kane and Kool G Rap to LL Cool J and Rakim, and never did that.

M.I.A., a Briton of Sri Lankan extraction, didn’t just do an MC Lyte impression and call it a day.

Fellow Australian Rebel Wilson doesn’t even do that when she joke-raps with Ellen DeGeneres.

If Iggy Azalea studied T.I., OutKast and Tupac and added them to her own natural speaking voice, my feathers may remain unruffled. I may just think she’s wack because her lyrics aren’t that great.

But then she twists her voice into a blaccent, ahistorically carrying the baggage of recording industry inequity and racial privilege, posturing in videos like the black male rappers she reveres while not seeming to understand that this wasn’t just funnin’ for those guys.

In our post-post-postmodern pop culture of America’s second gilded age, a downgraded music industry, and historically ignorant “post-racial” posturing, this is Iggy Azalea’s time to rise. So go ‘head, get that money on time, before there’s no money and you decline. Put your name in bold. I get that it’s tough to discuss authenticity in mainstream hip-hop these days. When Rick Ross in 2008 was revealed to have been a corrections officer, not the drug dealer on his records, the rap world collectively shrugged and popped that Maybach Music anyway. 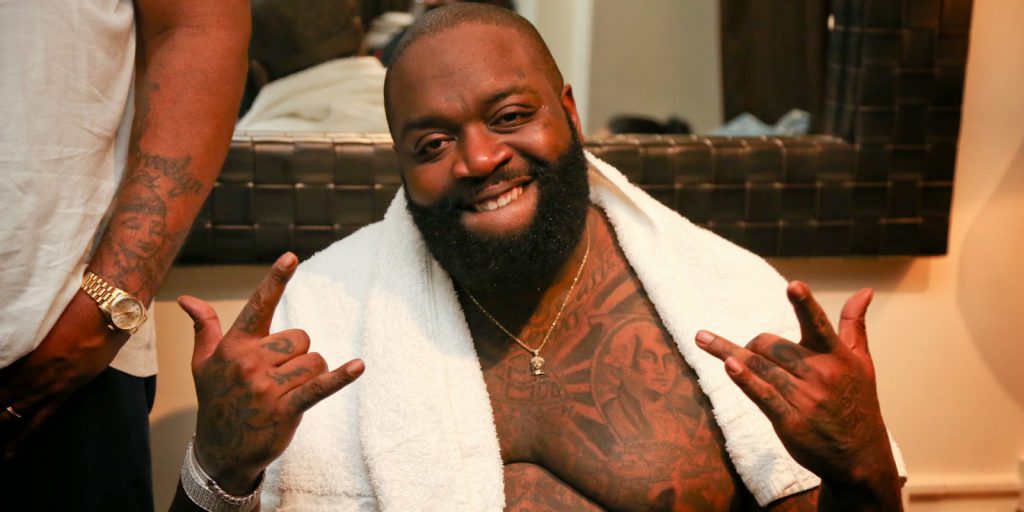 How did Rick Ross survive? He faked the story, but his records didn’t fake the funk. The soul made it real. So yes, you can be totally fake while keeping it real. But we have to believe.

I don’t believe in Iggy Azalea.

“Fancy” is stuck in my head, but actually I keep singing the hook by a former Song of the Summer mastermind, Charli XCX.

As Charli XCX wrote for Icona Pop’s summer hit, I love it.

The hooks to both songs are effervescently punchy bubblegum pop.

Now that’s the realest – from LA to Tokyo.