In this gritty, realistic sci-fi action epic, Godzilla returns to its roots as one of the world’s most recognized monsters. Directed by Gareth Edwards and featuring an all-star international cast, this spectacular adventure pits Godzilla against malevolent creatures that, bolstered by humanity’s scientific arrogance, threaten our very existence.

THE KING OF THE MONSTERS IS REBORN WHEN WARNER BROS. PICTURES’ AND LEGENDARY PICTURES’ 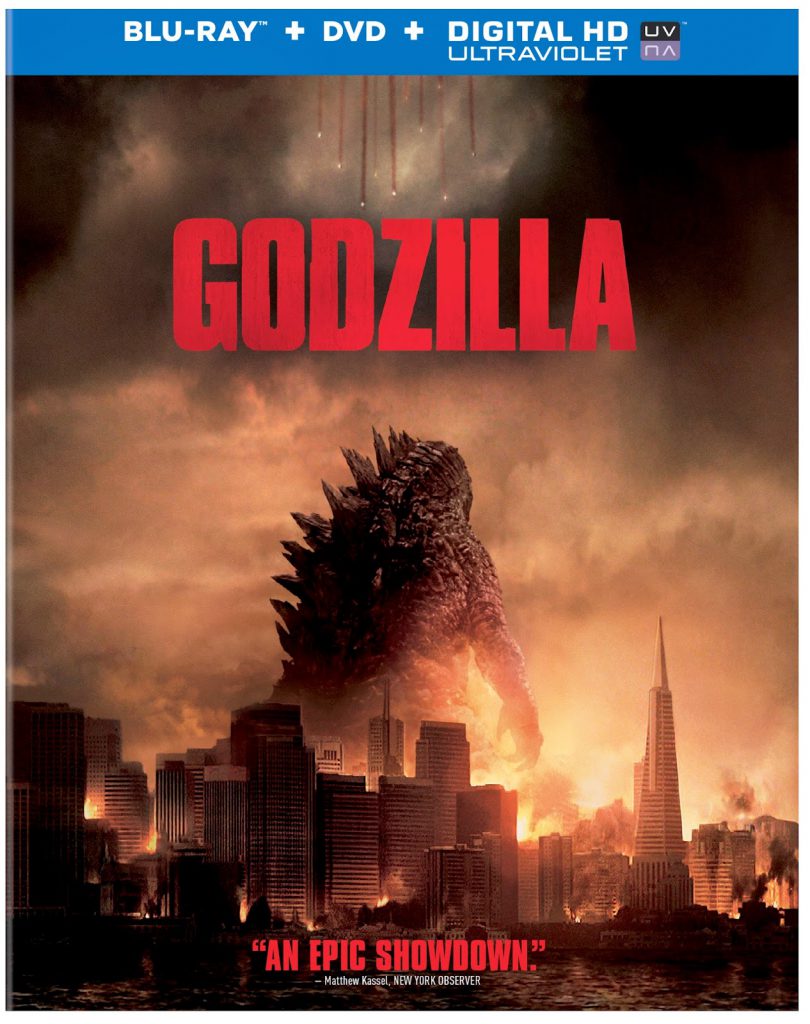 Directed by Edwards from a screenplay by Max Borenstein and a story by David Callaham, “Godzilla” is based on the character “Godzilla,” owned and created by TOHO CO., LTD. Thomas Tull and Jon Jashni produced the film with Mary Parent and Brian Rogers. Patricia

Warner Bros. Home Entertainment will celebrate the release of this summer’s blockbuster with a four-day interactive display at Comic Con International: San Diego on the lawn behind Hall H with entertainment and activities for fans. From Wednesday through Sunday, 8 a.m. to 8 p.m. each day, fans can view the 24-foot tall sculpture of the King of the Monsters, along with fan art and a graffiti wall where visitors can memorialize their favorite Godzilla moments. Giveaways and photo opportunities will also be available.

o Operation: Lucky Dragon
o MONARCH: The M.U.T.O. File
o The Godzilla Revelation
· The Legendary Godzilla – Go behind the scenes with filmmakers and cast for an even deeper look at the larger than life monsters in the film.
o Godzilla: Force of Nature
o A Whole New Level Of Destruction
o Into The Void: The H.A.L.O. Jump
o Ancient Enemy: The M.U.T.O.s

DIGITAL DISTRIBUTION ELEMENTS
“Godzilla” will be available for streaming and download to watch anywhere in high definition and standard definition on their favorite devices from select digital retailers including Amazon, CinemaNow, Flixster, iTunes, PlayStation, Target Ticket, Vudu, Xbox and others. “Godzilla” will also be available digitally on Video On Demand services from cable and satellite providers, and on select gaming consoles.

About Warner Bros. Home Entertainment, Inc.
Warner Bros. Home Entertainment (WBHE) brings together Warner Bros. Entertainment’s home video, digital distribution, interactive entertainment, technical operations and anti-piracy businesses in order to maximize current and next-generation distribution scenarios. An industry leader since its inception, WBHE oversees the global distribution of content through packaged goods (Blu-ray Disc™ and DVD) and digital media in the form of electronic sell-through and video-on-demand via cable, satellite, online and mobile channels, and is a significant developer and publisher for console and online video game titles worldwide. WBHE distributes its product through third party retail partners and licensees, as well as directly to consumers through WBShop.com.

Legendary Entertainment is a leading media company with film (Legendary Pictures), television and digital (Legendary Television, Legendary Global Television Distribution and Legendary Digital Media) and comics (Legendary Comics) divisions dedicated to owning, producing and delivering content to mainstream audiences with a targeted focus on the powerful fandom demographic. Through complete or joint ownership, Legendary has built a library of marquee media properties and has established itself as a trusted brand which consistently delivers high-quality, commercial entertainment including some of the world’s most popular intellectual property. In aggregate, Legendary Pictures-associated productions have realized grosses of more than $9 billion worldwide at the box office. To learn more visit: www.legendary.com

An epic rebirth to Toho’s iconic Godzilla, this spectacular adventure, from Warner Bros. Pictures and Legendary Pictures, pits the world’s most famous monster against malevolent creatures who, bolstered by humanity’s scientific arrogance, threaten our very existence.

Edwards directs from a screenplay by Max Borenstein and Oscar® nominee Frank Darabont (“The Green Mile,” “The Shawshank Redemption”), story by David Callaham and Max Borenstein, based on the character “Godzilla” owned and created by TOHO CO., LTD. Thomas Tull and Jon Jashni are producing with Mary Parent and Brian Rogers. Patricia Whitcher and Alex Garcia are serving as executive producers, alongside Yoshimitsu Banno and Kenji Okuhira.

Legendary Pictures is a division of Legendary Entertainment.