A new comic strip debuts in syndication from David Reddick (The Trek Life, Garfield) for the nerd and geek set! With the popularity of such mainstream shows Big Bang Theory and The Wil Wheaton Project and superhero movies being the Hollywood go-to—perhaps the time is right for the real estate on the dwindling comic page to be geeked out!

David talks to us about his ensemble comic strip Intelligent Life (King Features Syndicate) and how he uses social media to spark life into the characters.

FOG!: Thanks for joining us, David! I love when I can catch a strip at the beginning, but now I just want more! How did Intelligent Life come about?

David Reddick: Intelligent Life is a culmination of all the things I love. Anything geeky… nerdy… everything I’ve loved since I was a kid, and still do. It’s also a culmination of my previous experience in working with the Star Trek franchise in an official capacity, with the Roddenberry company, with Garfield, working for newspapers, etc. 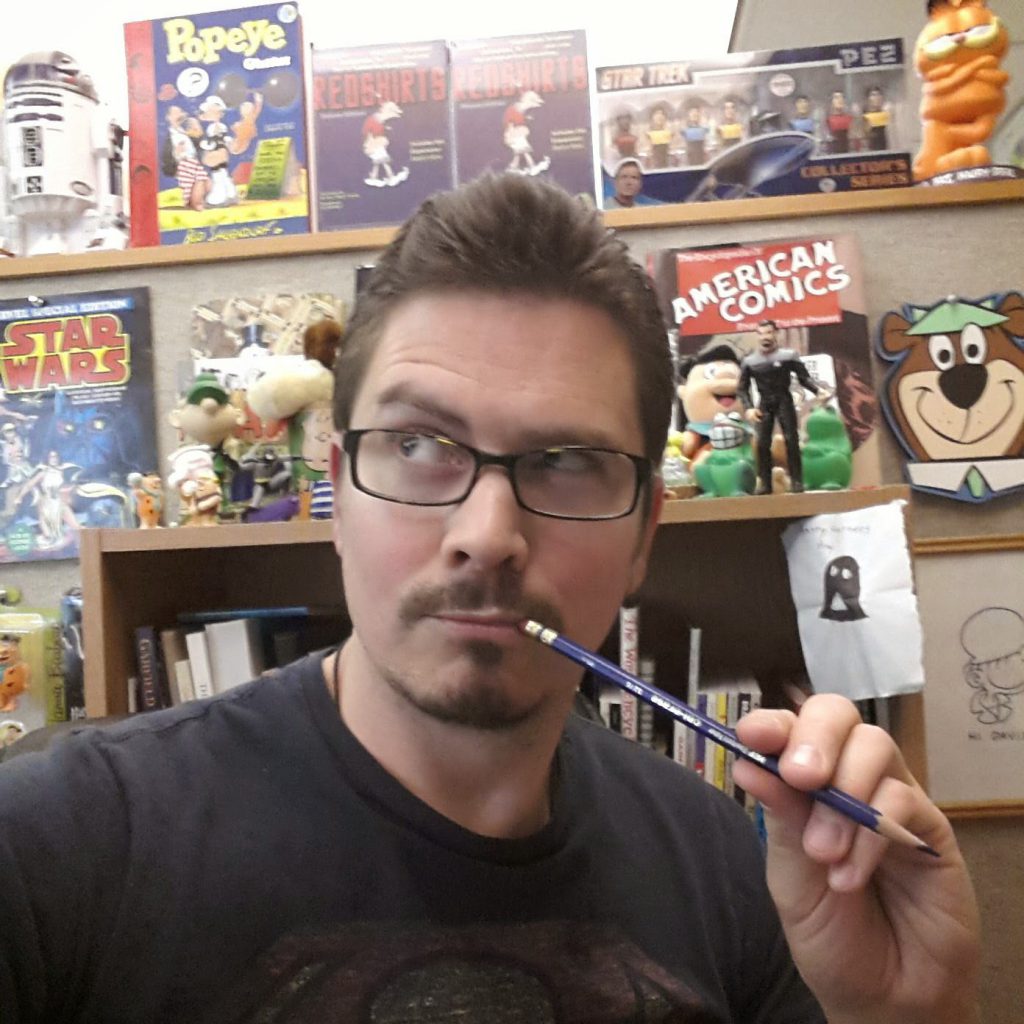 I created the rough concept for Intelligent Life many years ago, actually, in the early ’90s. But the time wasn’t right, then.

And Intelligent Life came to life.

From your work with Garfield and The Trek Life, you’ve gotten to work with some of the best names and characters in the paper and online. How difficult is it to balance how Skip, Mike, Gwen and Barry interact with each other?

It’s not difficult at all, thankfully… As the cartoonist, one just sort of sits back and works like a Dungeon Master in a role-playing game, placing the characters in situations or places, and watching them roll their own dice to see how they interact. Each has a very strong and defined personality, and it’s so fun to just watch them interact, and I, almost like a scribe of some sort, record the activity.

Strips and webcomics have a special kind of comic pacing, and even in your political work, you have just one panel to tell a story. How do you know when you’ve got the best place to put a punch line? 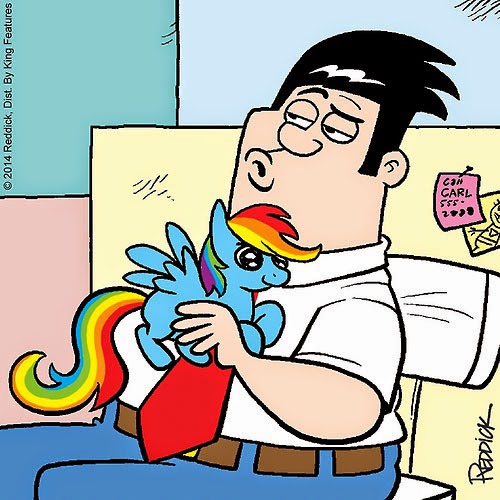 That’s a very good question.  Sometimes you don’t (in the creation process)! Sometimes you have to sit on it for a while. Or re-write several times. And sometimes it just HAPPENS, which I love, and that is dictated by the characters’ interaction.

You just get a feel for each character’s responses or “in-character” attitude towards whatever the subject matter, and they tend to write it for you, if that makes any sense.

You really do put them in situations and let them “act” the scene, but that comes with knowing them so well, as the creator.

They really do take on a life of their own and become real in some sense.

There has to be some scientific explanation for this strange mental phenomenon. heh.

Let’s be clear…these are nerds or geeks as the stars here! From Penny Arcade to xcxd there is plenty of material, that’s for sure. How do you think you will sit on the pages next to established ‘norm’ comics like Hagar and The Lockhorns (also King Features strips)? 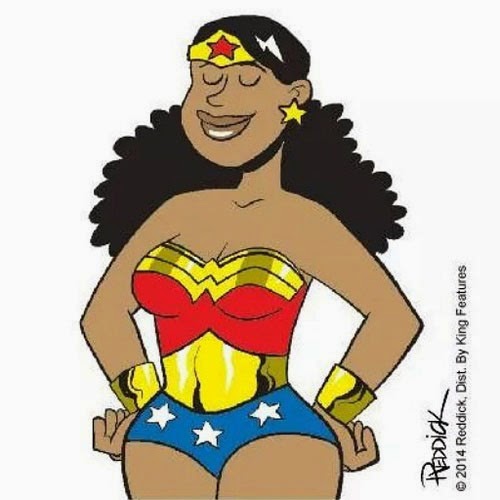 I think Intelligent Life will sit right at home next to these great established strips, all of which I love for their differences… which is what Intelligent Life, and what being a “GEEK,” to me is all about. Celebrating and delighting in differences, fanaticism and passions for the things we love.

I subscribe to the philosophy of Gene Roddenberry’s Vulcan IDIC… “Infinite Diversity in Infinite Combinations.” That philosophy not only works for life in general to me, but also in all things geekdom, and most definitely the comics page.

Beyond the strip are sneak peeks on Instagram and Pinterest. Are you going to be interacting with the fans a lot over in the social media world? We’ll be sure to follow! 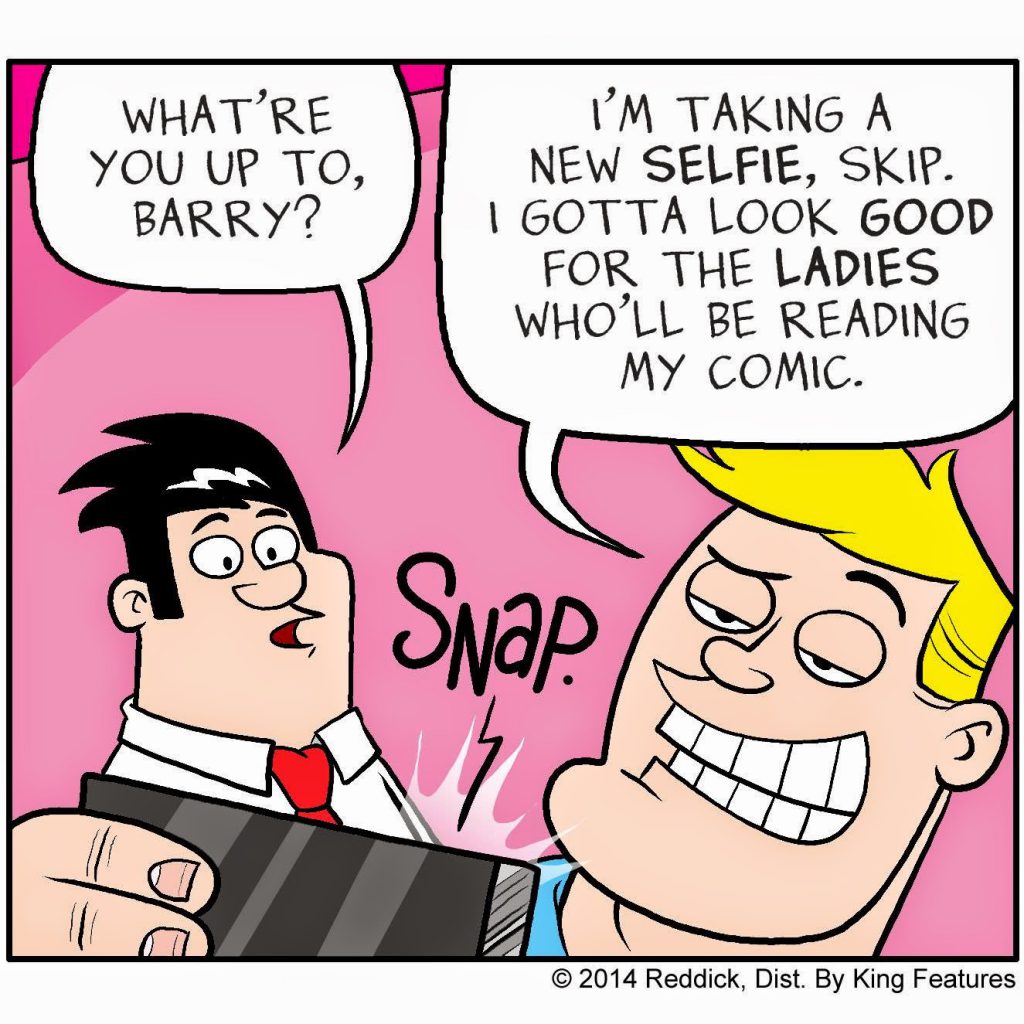 Oh, absolutely. I maintain and run all of Intelligent Life‘s social media myself, so I see every single thing that comes across my many apps (Smartphone/social media junkie, what can I say) and notifications online, not unlike some digital Eye of Sauron.

I also run Garfield’s social media at the Garfield studio, and know (and shamelessly embrace) the value of deeply intertwining social media and online interaction with the characters, comic and even the cartoonist. Fan and reader interaction is a huge boost to me, personally, because I love to interact directly with readers and fans, as they are the lifeblood of the comic’s success and future.

Their interaction feeds the soul of the comic for me in some ways by its “living” beyond the pages, beyond the website, beyond me, as it brings it to life in new ways and gives it even broader meaning, and that means a lot to me. Plus? I just plain love talking comics and living in Skip’s, Gwen’s, Mike’s and Barry’s world just as much as anyone else.

Lastly. What would be the food or drink item you’d wear out the food replicator ordering?