Today we’re with Faro Kane to tell us the tale of his delivered Kickstarter project, The Chronicles of Faro, now available for sale to the general public.

This time-caper takes us to the Lincoln assassination as the point of action for many different fates.

And while fate is an issue, one of the rewards was a custom Tarot card deck.

This first part of the story included Mr. President, John Wilkes Booth and a cadre of supernatural pals. 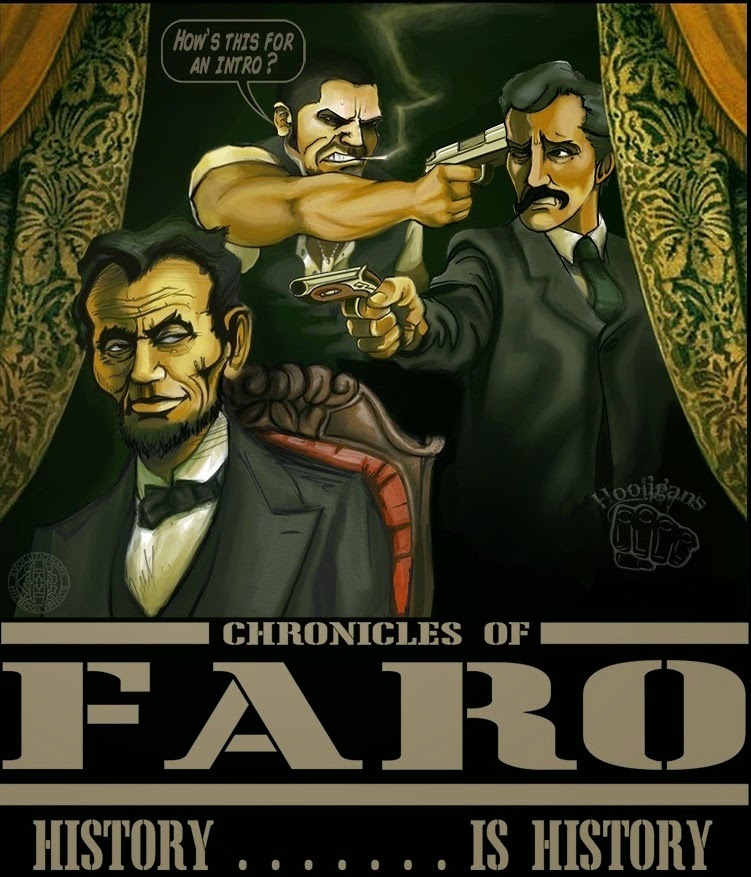 On top of that, he chose many different artists to tell the story, giving the book an anthology feel. We spoke to Faro about the book, the Kickstarter campaign and the secrets of Abraham Lincoln.

FOG!: Thanks for joining us today! Your pitch for Chronicles of Faro describes the book as James Bond meets Quantum Leap. Care to tell our readers what to expect?

Faro Kane: My two greatest influences growing up were James Bond movies that my father insisted I watch along with the obsession with time travel I gained from watching Quantum Leap. On Quantum Leap, the main character was a brilliant scientist who is able to leap into different people scattered throughout time. Each week he altered the lives of random people time and again, surviving death and love and confusion from having his mind meld with the people he’s “leaped” into.

While Dr. Sam Beckett changed minor history for the better, I always wondered how it would go down if someone altered a MAJOR event in time. While good would evolve, wouldn’t evil play the same game?

So I took the main character of FARO and gave him the persona of Professor Francis Kane, a 40 something instructor at The National Academy of Science (founded in 1863 by Abraham Lincoln) who destroys his career and sells his soul to achieve time travel.

The James Bond part comes in after time travel is achieved, where our older hero finds himself 20 years younger and the pawn of an elite circle of time traveling terrorists (like SPECTRE) I envision FARO as the James Bond, his sidekick MUZIO the MAULER as the Felix Leiter, Johnny Olives as Q and eventually the surviving Abe Lincoln as M. 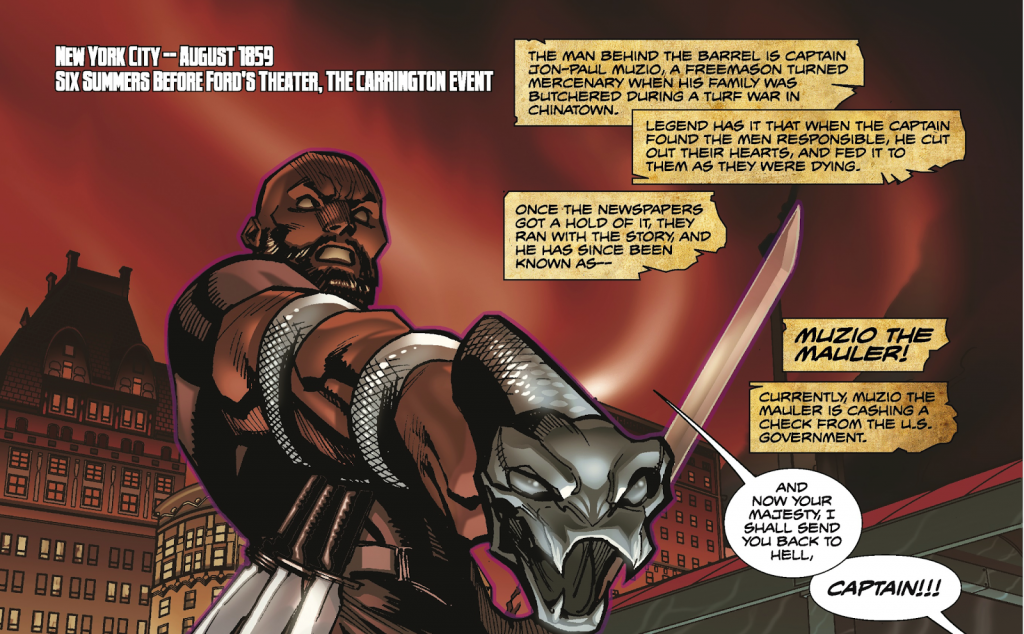 Besides the time travel aspects, there is also a bit of the supernatural and some religious references. How intense was your research for this one?

That’s always the fun part, taking elements of real history and mythology and turning it on its ear. It’s not enough to just shake things up, you get to alter historical facts tailored to how it’s changed from the main characters. I like to base the villains on legends from history, witches, warlords, Sodom & Gomorrah and the Wrath of God. It’s amazing how you can connect modern and ancient history in an interesting context without getting too boring with facts and just giving them American history on acid.

The center of the story, without giving too much away, is all about “The Butterfly Effect’ of the Lincoln assassination. Why did you choose this as the nexus of the story?

Since I first learned about it in elementary school, I’ve been obsessed with the Lincoln Assassination. I’ve driven friends and family equally nuts about theories and fascinations. 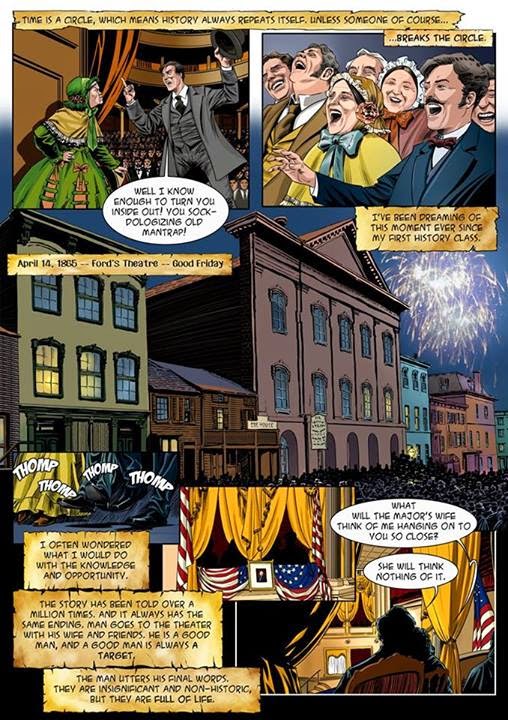 John Wilkes Booth wasn’t some drunken jerkoff off the streets. He was the Brad Pitt of his day, a knight in a secret army, a spy, the whole schmear.

So why does he blow his entire life of women and excess?

Because he wants to be immortal! What if John Wilkes Booth had a plan to hit Lincoln, be a hero to the fallen Confederacy, fake his death with a body double (he was an actor) and then live out his life under another identity.

Then mix in the fun of the James Bond mythology. How badly would you love to see Sean Connery show up as a lost or retired Bond who helps aid Daniel Craig in his next mission?

I sure as hell would want to see that on the screen or if I could, in a graphic novel. Or I can base the characters on my own. Point is what if Lincoln lives and Booth dies that night at Ford’s Theater?

Our story shows you what happens when one man makes one simple reverse. But what is affected in the process of crashing a major event. Indiana Jones can have the Holy Grail, Faro captures an American history. There is also something here for fans of the recent Edge of Tomorrow movie, I found! By nearly infinitely being able to relive the past, you might eventually get the desired outcome. But at the end of the story, you tease that there is more to come. What do you have planned for the second volume?

I finally got the summer off to start scripting out the outline for Chapter 2. I’m planning a 100 page story for this one with a proposed budget of $25,000 for the creative team I have in mind. This is always my favorite part of the process. Chapter 2 will pick up on THE AFTERMATH trailer of Chapter 1.

Domina Palms, the new witch in town now that Majesty was vaporized by God or the Devil or who knows what, is the mastermind behind a new game that demolishes the US government while capturing Lincoln as her prize chess piece. 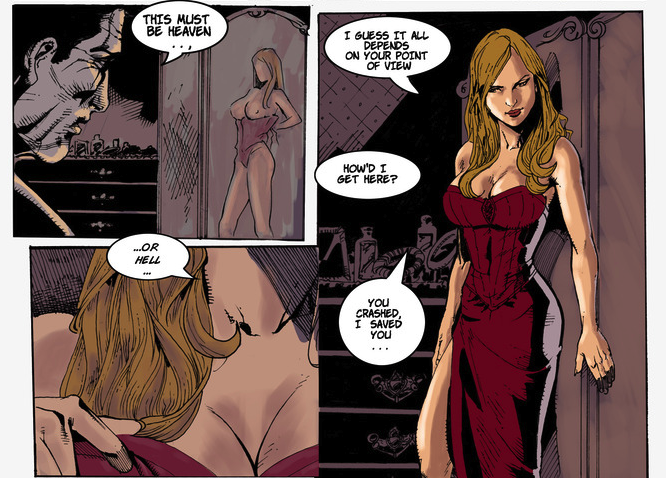 Faro is called back into action to rescue Lincoln from Mexico, while the collapsing American empire rallies to find a leader to fight off the occupation of Washington. It’s time terrorism vs blinded heroism as Faro must face the consequences of changing history.

I like the choice you made for many artists and showcasing their talents. Is this out of necessity or a stylistic choice?

It’s my way of trying to make a stamp in the indie market. My partner on this, the infamous Scotty Boom, thought I was crazy to do this. But I had this vibe about catering to not only a various amount of artistic desires, but also being a showcase for telling an ongoing story from different views.

It’s like Chris Rock doing his standup concert from 3 different venues simultaneously. So if I was going to pimp myself out to friends, family and friggin’ Facebook, I was going to do it my way. You only live twice. You get one near death experience, and one chance to make things right if you learn the life lesson. I wanted this to be part story, part showcase for fans of all kinds of art, amateurs and pros.

How was the Kickstarter campaign? Tell us about the awesome Tarot cards.

Kickstarter is exactly like a post war Hawaiian surfing adventure. You show up at the beach with promise in your eyes. You sell everything you own from your Playboy Magazines to your Playstations and you learn to fish to eat and camp out on the sand. You are ready to be truly free to take the wave and the damn thing goes up and down and backers jump and cancel and two weeks your flowing and then you plateau. You get nuts and go to comic con panels and scream when all they say is, “Social Media Man!” They act like you start a Twitter account and boom the cash register breaks from overuse. I stopped with the blanket emails and the fan pages and went after every comic book fan I could engage in casual conversation at stores within a 6 hour driving radius, and I would take a few hours and break my back on an old lounge chair and try to hit as many as 200-500 people a day on Facebook or Twitter one by one personal emails asking them to watch my trailer.

Then I did the math, I needed $8400 to get funded and 60 days to make it happen. That boils out to $140 a day and with the most popular reward being $25 for a print copy of FARO and the tarot cards (which were basically made to be evolved business cards that eventually will make a full deck instead of discarded among a sea of business cards).

That makes 6 sales a day to make my budget.

After hitting Facebook, friends and family I found that for every 5 people that watched my trailer or checked out the campaign, 1 stayed behind and bought something, the most popular reward being $25.

So to make it work I needed to hit 30 real people a day, eliminating any friend account that didn’t respond or ended up an avatar. So after sending at least 100 personal messages a day or texts to my face to face hitlist, we ended up raising $10,000. How you like that for using math in your everyday life. And if you don’t have the time to do this, then don’t be a dreamer or stop making excuses. You can sleep when you’re dead, and energy drinks and vitamin C are your friend as writers.

Where can we find out more about the comic online and where can they get it? 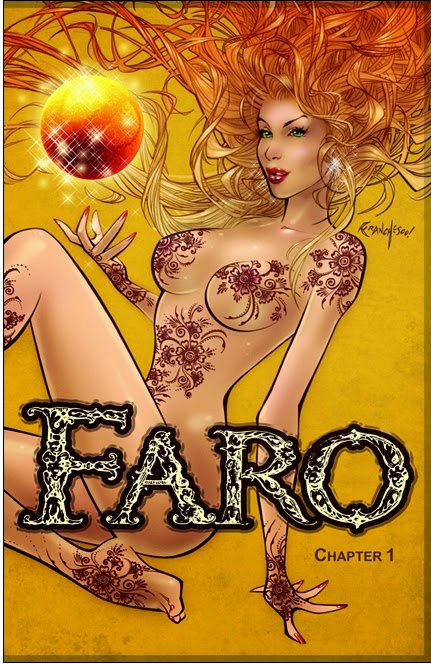