Luc Besson’s ludicrously fun and (shockingly) hard-R-rated Lucy has landed with a bigger bang than expected, and industry analysts are already frittering over the how’s and why’s behind the estrogen-charged film’s surprise trouncing of the “sure-fire” macho blockbuster Hercules starring The Rock.

Meanwhile, let’s take a moment to celebrate some of Lucy’s glorious and gutsy forbearers. I present to you my shortlist of moviedom’s mightiest misses: 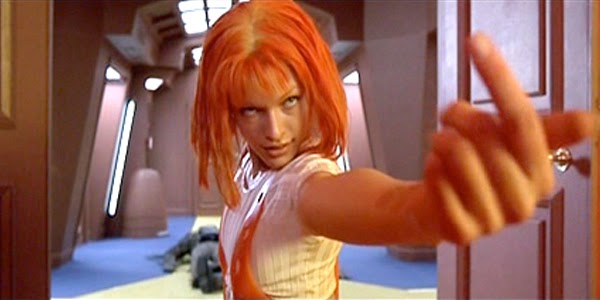 Resurrected from a scrap of cosmic DNA and reanimated into the supermodel-fabulous Milla Jovovich, the scantily clad and quick-learning Leeloo is nothing short of the Supreme Being in Lucy director Luc Besson’s campy comic-strip-styled space circus. She’ll easily fend off any unwanted advance in the blink of an eye and/or a precisely delivered blow, and she can catch up on the entire history of human endeavor in a single reading. Critically, her capacity for love as shared with a certain wisecracking New Jersey lunk just might save the universe. 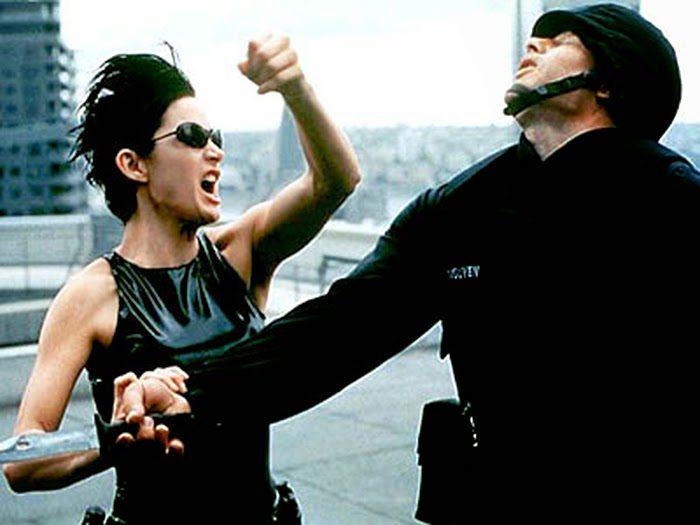 It’s a shame the Wachowskis didn’t give her much to do in the sequels, but the original Matrix establishes Trinity (Carrie-Anne Moss) as a force to be reckoned with—inside and outside the digital realm. She’s a brave and stylish match for our new world savoir, Neo.

She knows Kung Fu, too—and about a half-dozen thousand other things. And her capacity for love as shared with a certain special surfer-dude-talking Jesus metaphor just might save their universe.

Suburban mommy Samantha Caine (Geena Davis) awakens from a long bout of Agency-inflicted amnesia, remembering by accident that she’s truly a sleeper assassin named Charly Baltimore, she’s been in hiding for years, and bad men with guns and a dastardly plan presently want her dead. Her past is catching up with her, but once her hypnogogic haze clears up, she finds she’s perfectly capable of taking control of any combustible situation—with or without the help of co-star Samuel L. Jackson.  Charly’s capacity to protect her daughter in a crisis just might save their skin. Davis’ then-hubby Renny Harlin directs, and this is inarguably his finest hour…though large credit is due to Shane Black’s whippersnapper screenplay.

Back in the early ’90s, Anne Parillaud was the Audrey Tautou of French cinema—an effervescent personality who popped up in seemingly every French import of her day. Her Nikita is a tough street punk “recruited” and trained to be a master assassin, and the actress maintains a delicate balance of raw animal magnetism and wounded vulnerability—something not quite equaled in the otherwise surprisingly solid American remake, Point of No Return.

I typically approach American remakes with skepticism, but this one acquits itself nicely and earns co-mention alongside Nikita. Bridget Fonda makes her variant “Nina” her own, her repartee with the no-nonsense elocution instructor (Anne Bancroft) is priceless, and director John Badham (Blue Thunder; the two Stakeout pictures), is no slouch in the action and suspense department.

German filmmaker Tom Tykwer’s propulsive post-punk fantasy is a 90-minute shot of adrenaline, with our athletic heroine Lola (Franka Potente) racing against a ticking clock and running—and running—all across Berlin in a frantic quest to retrieve a bag of stolen loot and save her boyfriend’s hide. The audacity of the screenplay is in its pressing of the “reset” button to play out three alternate scenarios, with each subsequent version informed by the previous round. Surprisingly, no American remake has yet been attempted. 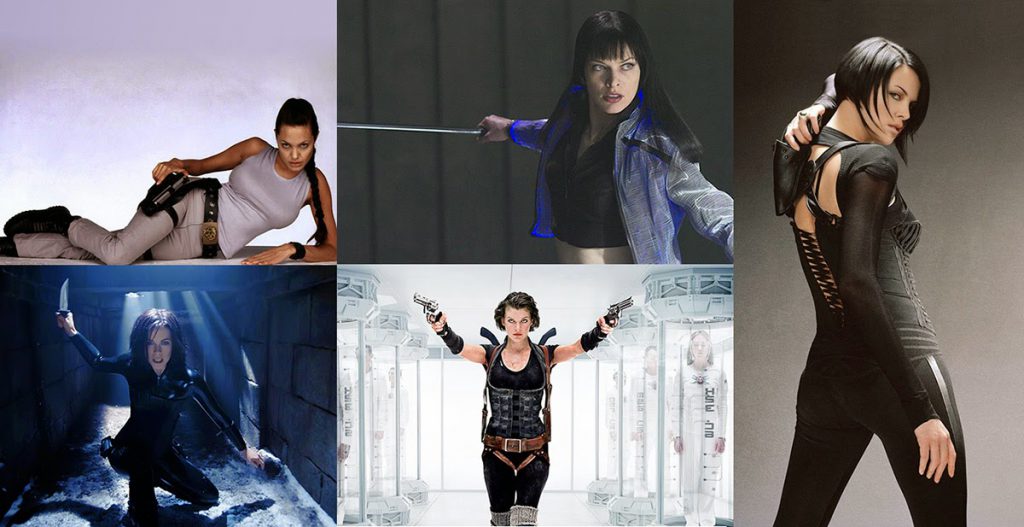 Technically, not all of these ladies are based on videogame characters—it only seems that way. Nevertheless, I offer a salute to the tough and resourceful women in charge of the Lara Croft flicks (Angelina Jolie), the interminable Resident Evil franchise (Milla Jovovich—again), Æon Flux (Charlize Theron), Ultraviolet (Milla Jovovich—yet again) and the seemingly endless Underworld series (Kate Beckinsale). I confess, I cannot explain to you the subtle differences between them—other than Angelina raids tombs, Kate slays vampires and werewolves, Milla destroys assorted post-apocalyptic creatures and goons, and the creators of each of them have all thieved rampantly from the Wachowskis.

Perhaps she’s the biggest badass of them all, for being the only dame on this list who slugs it out with a bitterly enraged alien queen in outer space. After Ripley torches the giant creature’s nest, eggs and bodyguards, the queen bitch hitches a ride on the evacuation shuttle and attacks on the inner landing platform of the spaceship Sulaco. Though equipped only with limited weaponry and a clunky but serviceable bit of freight equipment, Ripley’s greatest asset is her motherly instinct to protect newfound surrogate daughter Newt, who’s hiding in the crawlspaces beneath.

Fans of the longer expanded version recall the unexpected exchange of our main characters’ previously unmentioned first names, as well as a crucial new subplot concerning Ripley’s heretofore unrevealed daughter. Only after the expanded version do we understand the fuller implications of Ripley’s newfound bond with Newt—and, perhaps, shudder all the more seismically to recall what the writers of Alien 3 had in store for them next. 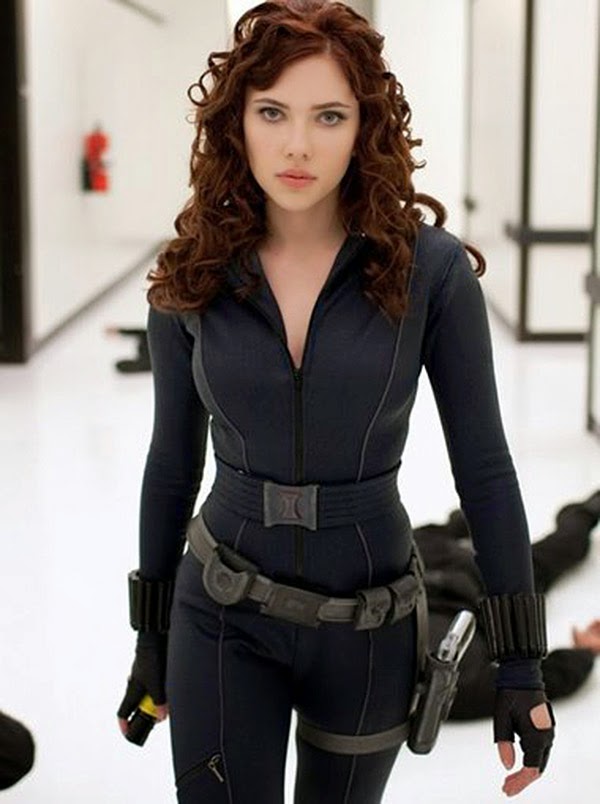 As one of the human members of The Avengers lacking actual supernatural powers, Scarlett Johansson’s Natasha Romanoff, a/k/a Black Widow, earns her spot on the team with a knockout mix of wily wits, stunning ninja skills and form-fitting black leather. Since the character’s introduction in Iron Man 2 and continuing through her contributions to The Avengers and Captain America: The Winter Soldier, she’s been begging for a solo movie of her own.

Judging by the eye-opening first-weekend gross of Scarlett’s latest Lucy, I’ll wager a solo Black Widow movie is already in the works over at Marvel, and that it will premiere on one of the 2016-2018 dates the studio recently staked out. Meanwhile, Sco-Jo will rejoin a newly expanded assembly next summer in Avengers: Age of Ultron.