Beyond the innovative distribution method they have devised with a ‘pay what you want’ donation system at Panel Syndicate site, the story itself is revolutionary.

‏Within the tablet-friendly landscape format with a DRM-free file formats lies a future tale where nothing is private. The Internet doesn’t exist. The ‘cloud’ has burst and everyone wears a mask. The cops of the future are The Fourth Estate – code word for the press. 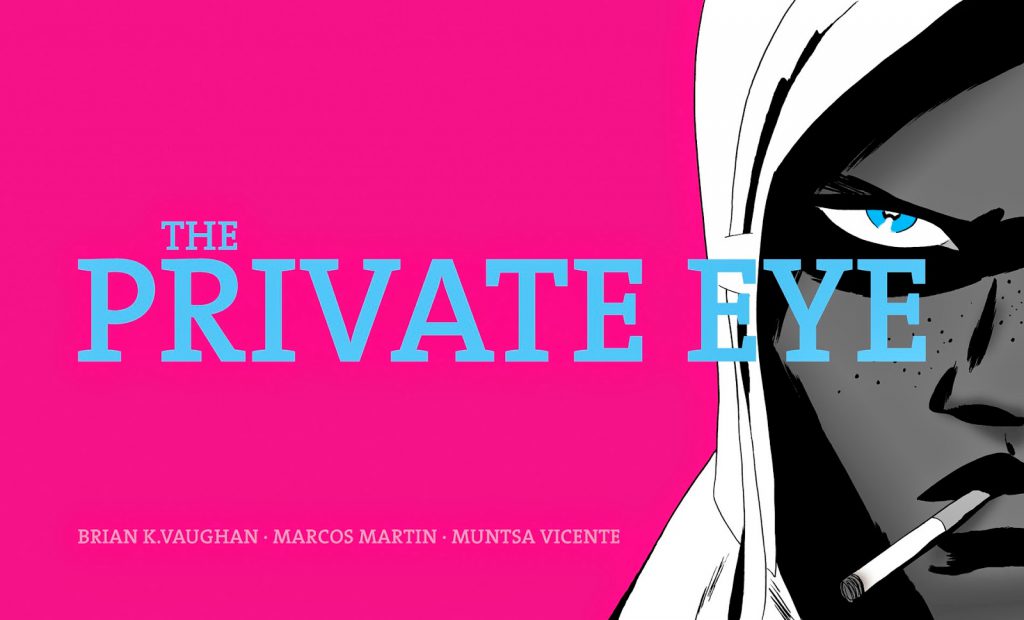 You may not know about this sleeper hit, but if you wanted to, you can pay $0 to read it right now.

You’ll quickly find justification for leaving a donation (or not, that’s how they roll).

‏
‏Issue #7 came out last week, and it had been since issue #1 since I’d gone through and made my donations to get all of the issues. I’m in a trade-reading mode as of late. Sure, I’m still a Wednesday Warrior but some series like Superior Foes of Spider-Man and Morning Glories I read in big chunks. Mostly because I’m busy but partly because I need to remember what happened last issue!

‏The backmatter — or what could be called the letters page in the issues — shows the main motivations behind the storytelling and delivery. 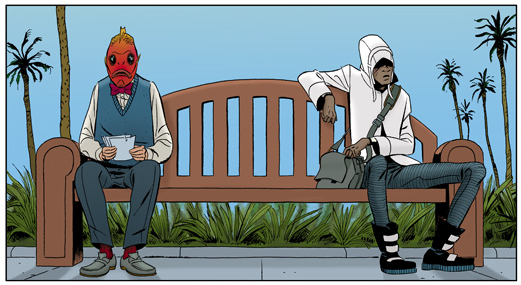 It was Marcos’ idea.

Any attempt for BKV to impose a minimum on the ‘collected’ file issues #1-5 were shot down.

You could still read all of this for free, and in the spine of the actual storytelling, this is important.

Sharing, owning what you own, being a part of a community or club that even knows about this book adds a layer of belonging and ownership to the comic that entirely feels right.

Mix a bit of ‘I knew this band when’ with ‘I didn’t even pay for this’ plus ‘you can only get this in a digital format’ gives the book a punk rock aesthetic that should appeal to the teenager in you.

‏While dealing with the idea of online privacy and what that means when it goes away, our adults in the story are forced to wear masks outside of their homes. 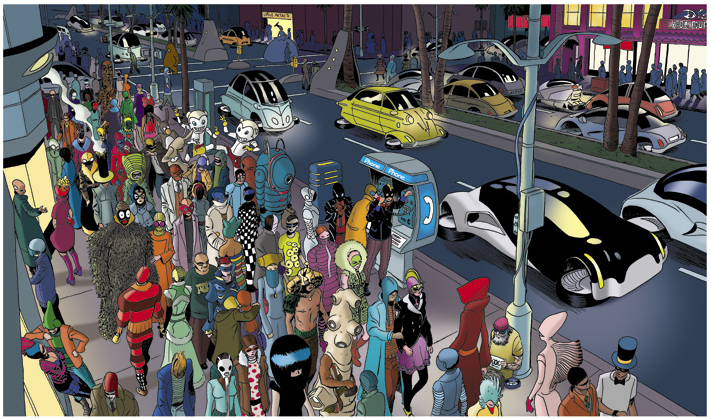 “Gramps” is someone our age now, grown into a bitter old man because he can’t play his first person shooter on a network against other people.

There is no network. It went away years ago when the cloud burst.

‏Our main character is P.I., living at Chateau Marmot. He has an amazing camouflage Dream Coat that blends into the environment. He’s your noir detective but young and as spry as Matt Murdock.

When Taj arrives at his doorstep to investigate her own past, he turns down the case. It is not only until she is murdered that her sister Raveena seeks out P.I.’s help. 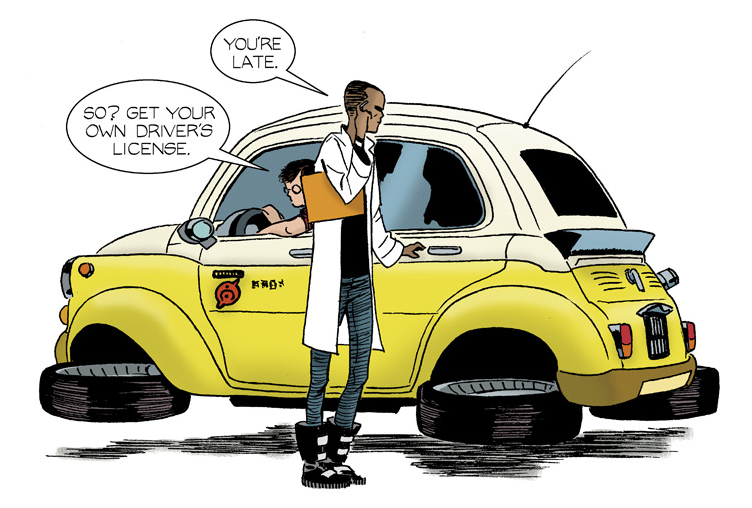 Mel is a 15 year old driver to the detective, a wise ass Robin giving him shit about the fact that he can’t drive. She doesn’t have a ‘Nym’ – the adult pseudonym everyone must grow into and the mask to match.

‏They are chased by the murderous DeGuerre and his Rocketeer helmeted goons, speaking French as they blast their way through LA. The mystery deepens as DeGuerre’s plot to resurrect a network from the past begins to reveal itself.

‏Marcos Martin is a sleek and elegant artist with a classical comics style. Like contemporaries Ming Doyle, Javier Pulido, Francesco Francavilla, his linework, page layouts and flowy action makes a beautiful page. There is something also of the Silver Age to his work. He rides the razor thin line between being innovative and retro at the same time. Not something many artists can accomplish. 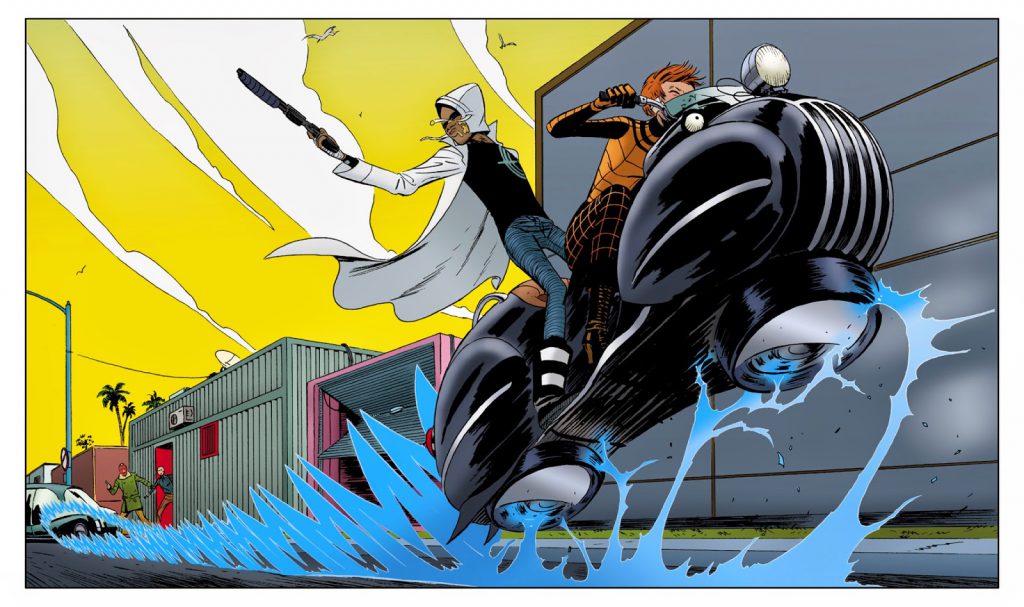 The colorist, Muntsa Vicente also flavors the book with bright colors and the end result is the perfect compliment to the lines.

‏This ten issue series has an end and we have approached the third act and things are heating up. The issues are available in many languages and are published as soon as the creators are done, on an international scale.

BKV and Martin are threatening (the industry) promising (the fans) that soon a Panel Syndicate announcement will be made for the next series of books and creators. Not since the end of True Detective Season One am I anticipating a return with such enthusiasm.

‏In the nineties, seven of the world’s best comic creators split off and started The Image Revolution.

The next logical step for Panel Syndicate is to do the same. And while the creators might not be acknowledging it, with their humble ‘thank yous’ and ‘we didn’t think this would work’ sentiments, the next revolution wave seems to be here in the pages of The Private Eye.

For more details and to read The Private Eye, visit panelsyndicate.com and @PanelSyndicate