But over the years, Finn the Human and Jake the Dog are dealing with issues not typical for your usual kiddie fare. Parental neglect, death, dementia, mutilation and the ever-present issues of the lovely ladies of Ooo has given the hit show a demographic that reaches beyond the playground sect.

And even though the show has found massive success since it debuted in 2010, the cast and crew of the hit Cartoon Network series are still in awe at their popularity at San Diego Comic-Con.

“This is the only place I go where I have to have an escape route planned,” said Tom Kenny, the voice of the Ice King. “This just doesn’t happen in the real world.”

“It’s been a good Con so far…Someone dressed up their baby as Lumpy Space Princess. It was this sixth month old baby, said John DiMaggio, the voice of Jake.

“That would be like if my dad dressed me up at Marshall Matt Dillon from Gunsmoke, joked Kenny.

At times, the fan experience can be a little overwhelming, to say the least.

“This guy painted his entire house in ‘Adventure Time’ stuff,” said DiMaggio. “Jeremy (Shada) and I knocked on his door, and he was like, ‘What?!’ And we were like, ‘Hi! We play Jake and Finn!’

And they were Adventure Time boxers.”

“You can never predict anything like this. Trying to predict the success of a television show is like trying to pick where a chicken is going to poop in the grid,” continued DiMaggio.

“The first time you go in to read the lines, you just have no idea. I was baffled and so confused,” said Olivia Olson, the voice of Marceline the Vampire Queen.

“For many years, I had many questions about what the hell was going on,” joked DiMaggio.

“You never know when a show will hit on a deep emotional level like that…the stuff they respond to above and beyond is the stuff that turns out to go a little deeper. With SpongeBob SquarePants, when we showed that pilot for the first time, people were like, ‘I don’t know why, but I love this.’ With Adventure Time, when it was a short, my kid and his friends were obsessed with it and wanted to see more. But then Adventure Time went deeper.” 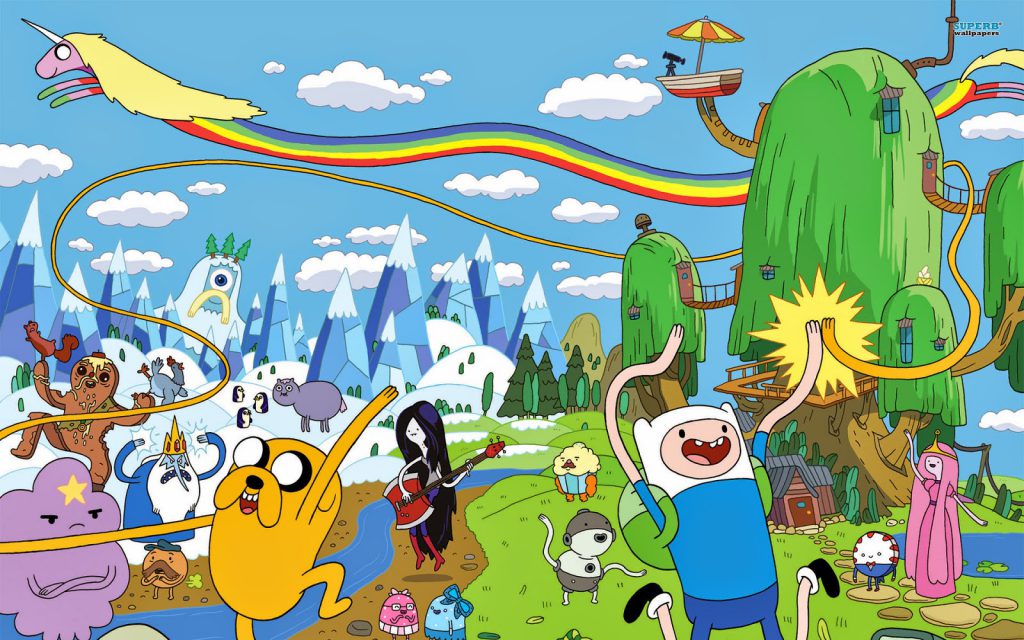 As the show continued, the characters grew. Jake and Finn were no longer just rescuing princess or looking for treasure, they were having kids, or looking for lost parents. The Ice King went from the show’s villain to a deeply tragic character of a man who lost everything in an attempt to survive.

“These changes in character sets this show apart from other shows,” said Shada, the voice of Finn. “Crazy stories like Finn losing his arm or giving the characters an insane dramatic backstory makes the show very cool.”

“It gives us a lot of knowledge about our characters. In the beginning of the series, I didn’t realize that who Marceline was and why she was always trying to mess with you guys. But now, you know she’s had a really long, hard life and she’s bored now,” said Olson.

“When there is this much depth now, we really have to approach the characters with a lot more forethought and a lot more attention of where they can go,” said DiMaggio.

“It’s a great mix, like life is too, of the hilarious and the awesome and the tragic and the sad,” said Kenny. “There is a sadness to this show sometimes that is unusual in American television animation. It really does let you be part of something that is different and has never been done. People come up to me and say, ‘Oh, that episode made me cry.’ And I would be like, ‘Oh, don’t take this the wrong way, but I think it is awesome that our show made you cry!’”

“With the story of Simon and Marcy, I had a fan tell me that the story helped her deal with her father’s Alzheimer’s,” said Olson. “It is a really different way of approaching things, but it does portray real life situations and problems.”

Fan reaction to the episodes have been powerful at times. Kent Osborne (Head of Story) and Adam Muto (Co-Executive Producer) talked about the response the audience has had to a few of the episodes.

“A lot of times, fans will ask questions about if we can do this or this story, but because it is animation, we already wrote that story a year ago, but we can’t say it. Many times, people tend to make suggestions about ideas we already thought about, so when they see it, it feels like they contributed,” said Muto.

As for the future of Adventure Time, talking about returning guest stars.

“Rainn Wilson is coming back. He’s a huge fan. He came in with his son to watch us record,” said Osborne. “Lena Dunham is going to come back…wait. That’s a spoiler.”

Adventure Time is currently in it’s sixth season on the Cartoon Network.