Since we profiled his weird and wonderful Monkeybrain book Headspace back in March, Australian writer Ryan K. Lindsay has become one of our favorite independent comic creators.

Other books of note you may be interest in are a run with My Little Pony: Rainbow Dash, and his own books Fatherhood and Ghost Town.

Ryan joins us today to promote his Kickstarter for Deer Editor #1 about an investigative journalist deer, stalking the streets for clues and justice.

This equine-noir story, like the rest, starts with the first trot.

FOG!: Thanks for joining us again, Ryan, this time for a Kickstarter Korner. The campaign just started, correct?

Ryan K Lindsay: Yep, in the very first days of our wild adventure.

I’ve been on a ‘70s cop and otherwise smokey newsroom movie jag as of late. I don’t remember any stag journalists in those, though. What’s special about Bucky in this tale? 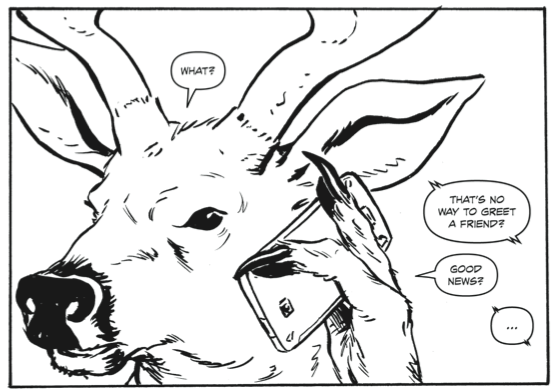 Beside the fact the man is a walking deer, Bucky personifies that hard nosed determination of investigation and need to know the truth that really became the staple for that era. The need to dig deeper, the desire to not be bought off but to want to stand by your honesty, and your honor. Bucky is the guy who’ll not stop.

Also, he can totally smell crime scenes for human scents, he can run faster than any normal man, and his antlers come in handy in all sorts of kooky situations, as you’ll see in the complete issue.

Did you make a conscious decision to make this a journalist rather than a private investigator or a cop story? Each could work but the journalist angle always seems to have more grit.

Bucky was always a journalist, from the very first thought of him, and here’s why—Bucky only exists because of Twitter. I saw @benrankel tweet something about typos (I can’t remember the specifics) but I tweeted back something along the lines of it being embarrassing to write into a magazine and address it to Deer Editor. Boom. The character came pretty fully formed, which is a nice change. Plus, I loooove journalism and have wanted to tell a journalist tale forever.

You’re no stranger to bovine tales. Who is Bucky based on, or rather, who would you like to see him played by in a movie?

Bucky certainly isn’t based on anyone, actually. Sometimes I’ll have that little seed of someone else hidden in there but Bucky is pretty standalone—though his fashion reference is quite clearly Robert Redford. As for a movie, I guess it’d be mo-cap, right? Bucky is pretty tall…Bradley Cooper is like 6″4, he could do it. But he does all the movies.

Oh, I got it—Joseph Gordon-Levitt. For sure. He could nail the certainty and swagger of this man-beast in a heartbeat, height be damned. JGL for DE starts here and now!

When drafting a murder mystery, do you start at the crime and move backwards, or do you start scripting all of the action and then wrap it up when you see it clearly?

I plot it all out first, tweak, edit, refine, and make sure it all knits together before I script any of it. Especially with a murder mystery, you wanna seed some Chekovian pieces onto the map where possible.

How did you hook up with Sami Kivelä on art?

I met Sami through the civilian alter-ego of Captain Canuck, Ed Brisson. Sami was speaking with Ed about a thing and then Ed was kind enough to introduce us. From there, we’ve been doing different things non-stop while Sami also works at Zenescope on rad things.

Is this set in the same ‘universe’ as Tiger Lawyer?

I believe it is. Ryan Ferrier’s lawyers disagree.

You are keeping digital donations at $1 and have a stretch goal that includes a radio dramatization of the book! Tell us about how you took a different approach to this campaign from what some others are doing.

I love comic Kickstarter campaigns. I’ve backed many, I keep an eye out for them, I tweet ’em out if they look rad, and I’ve been behind the scenes giving feedback on plenty in my time. Across those many years, I’ve formed some pretty firm ideas about what I do and don’t want to see campaigns do.

For instance, I have never backed a campaign by giving $5 to get an email high five or some malarkey. That’s for the birds, man, and I kinda hate it—no offense (though maybe a little, so please stop offering $2 for a tweet shout out). Kickstarter isn’t a charity case, it’s a distribution model. It’s a place of commerce. So I wanted to see all my pledge points yield real things.

I also don’t like paying $10 for a digital download of a single issue. Again, for the birds. So I thought I’d put the issue up at $1 because surely no one can say no to that, right? God I hope not, ha.

But many backers are keen to drop up to $20—or so the data driven sweet spot would suggest—so I wanted to have an option at that level. Many months ago, I thought it would be cool to offer an audio version of the comic—like what Mark Waid and co did with Daredevil #1 way back when. So I put it up there and it’s connected with people, which is so cool.

Overall, I wanted to keep this campaign as digital focused as possible because postage from Australia to anywhere else blows.

Anything else coming down the pike from you?

At the moment, Headspace rolling on is the main priority. Issue #4 (easily our best yet) lands before the end of this campaign. Then any future projects are a little up in the air or hush hush. The Vertigo short story I wrote just landed. I’m assembling a few pitches, and also putting together some rad one-shots but I don’t want to talk them up before they’re closer to completion.

If you could have deer superpowers, would you pick retractable antlers (think Wolverine), super running speed, or night vision?

Oh, god, those retractable antlers would be so impractical but now I totally want them. Want? Hell, I think I NEED them now. Imagine swatting flies, or scaring small children—just walking up to one in a shopping center, busting the antlers, making a funny face, making them deuce their drawers, and then whispering “No one will ever believe you.” before walking away. Man, I’m not going to be able to sleep tonight now, haha.

Thanks, Ryan! Best of luck on the campaign and new stretch goals!

Cheers, thanks for having me around! 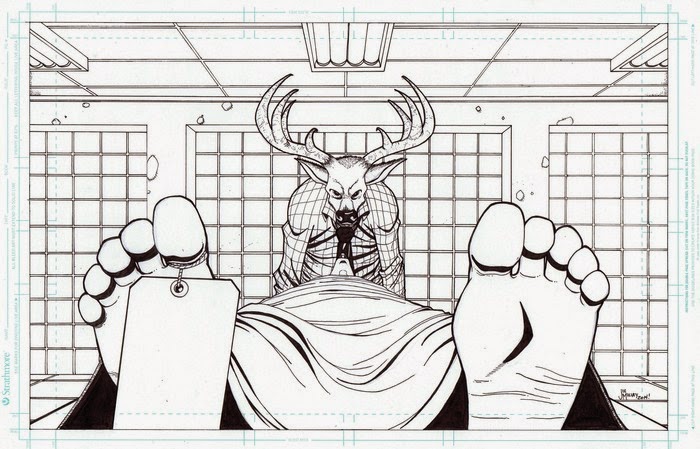