If you think you don’t need to upgrade to the Looney Tunes Blu-Rays, you’re wrong.

Despite the plethora of animated treasures Warner Home Video has bestowed on us, the DVD technology could be very unkind to the short cartoon.  Going beyond DNR, audio, and censorship issues, compression on dual-layer DVDs could be a nightmare when the programmers put all of the cartoons on a disc two to three times each. 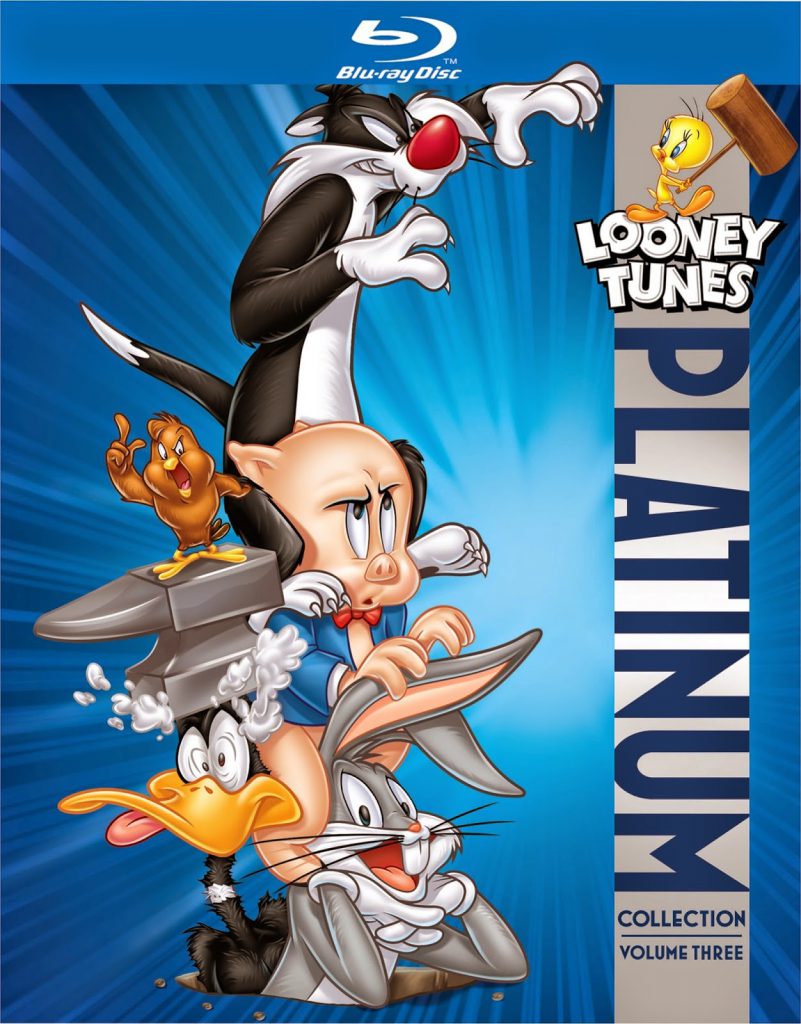 Fortunately those days are over with Blu-ray technology. Looney Tunes Platinum Collection Volume Three is another winner with 50 cartoons in 1080p high-definition.

Despite that almost all of these were on home video before, the upgrade is essential for hardcore fans.

When you’re able to zoom into Leon Schelsinger’s face 2.5 times without coming across many digital artifacts, you know you’ve struck gold.

The only flaw is the programming: there really isn’t any. It’s basically a garbage dump of Warner cartoons, kind of grouped by character.

True, it’s the films themselves that matter, but for those accustomed to the reasonably well-programmed compilations of the previous laserdisc and DVD releases, it’s a step down.

Here’s a breakdown of the cartoons and transfer issues (if any):

Hiawatha’s Rabbit Hunt (1941, Friz Freleng)
Bugs finds himself in Little Hiawatha’s cooking pot. One of the first where Freleng’s comedic timing comes into its own, albeit, with some funky drawing. Transfer from the Warner Bros. Home Entertainment Academy Awards Animation Collection.

Little Red Riding Rabbit (1943, Freleng)
The one with Red Riding Hood bringing a little bunny rabbit to her grandma… “TA HAVE.” At this point, Freleng’s timing and direction was generally flawless. New transfer.

Hair-Raising Hare (1946, Chuck Jones)
The first one with the big, red hairy monster. “Having re-redisposed of the monster…” New transfer.

Acrobatty Bunny (1946, Bob McKimson)
McKimson’s first with the rabbit, battling a lion at the circus. Transfer from Golden Collection Vol. 3.

The Big Snooze (1946, Clampett)
Clampett’s swan song at Warners, with Elmer tearing up his contract and Bugs invading his dreams. New transfer, no DNR like the earlier releases.

Slick Hare (1947, Freleng)
The one with Bogie and Bacall in the restaurant. “Why did you hit me in the face with a coconut custard pie with whipped cream?” New transfer. 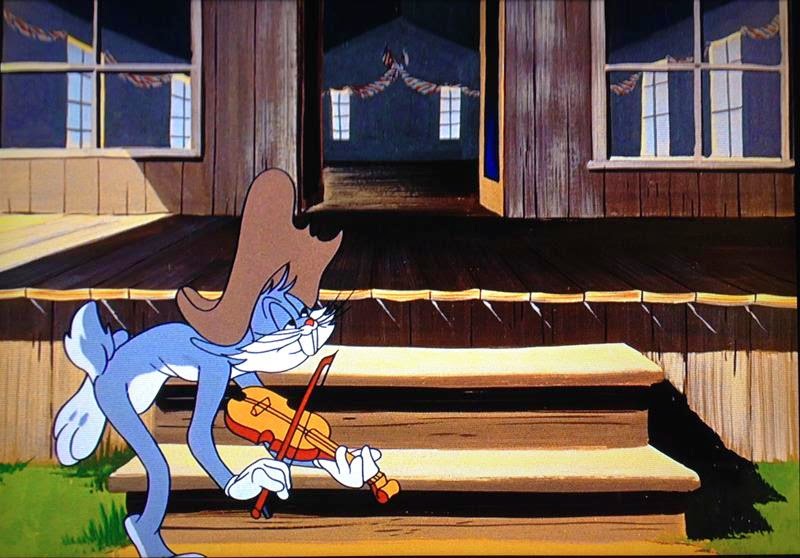 Bugs gets into his usual hijinks with a pair of hillbillies in the Ozarks, before the plot is abandoned for a wild square dance animated by Rod Scribner and Emery Hawkins. Transfer from Golden Collection Vol. 3.

Bully for Bugs (1953, Jones)
El Toro versus Bugs in Jones and Mike Maltese’s attempt to prove to producer Eddie Selzer that bullfights can be funny. New transfer, but still has the incorrect audio pitch like the earlier releases.

Bugs and Thugs (1954, Freleng)
Bugs gets taken for a ride by gangsters Rocky and Mugsy. “Hmmm, you might, rabbit, you might.” New transfer. 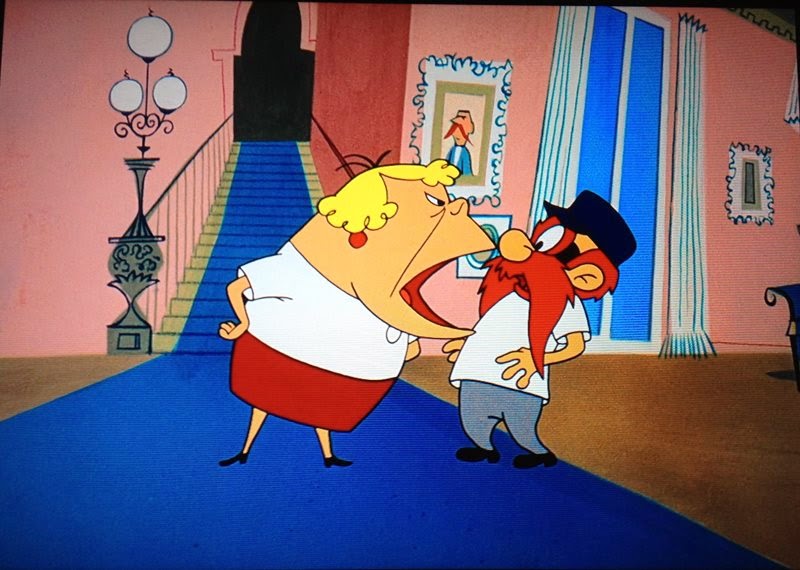 Yosemite Sam marries an ugly widow for her money, but gets a prehistoric hornytoad stepson in the bargain. Remake of the superior His Bitter Half with Daffy, but it kind of fits Sam’s personality better. New transfer.

A Ham in a Role (1949, McKimson)
The Goofy Gophers torment an ailing Shakespearean dog, who considers animated cartoon humor beneath him. Written by Sid Marcus for the short-lived Art Davis unit, finished by McKimson’s. Transfer from Golden Collection Vol. 6.

A Bear for Punishment (1951, Jones)
The final, and best, Three Bears cartoons, supposedly based on Jones’ own real-life disastrous father’s day. Transfer from Golden Collection Vol. 2.

Steal Wool (1957, Jones)
Sam Sheepdog and Ralph Wolf head in for another day’s work. Take note of Maurice Noble’s underrated design work in this film—the use of rubber stamps as leaves is fairly brilliant. Transfer from Golden Collection Vol. 3.

Porky Pig’s Feat (1943, Frank Tashlin)
Tashlin’s triumphant return for his third (and final) stay at the Schlesinger/Warner studio is marked by cramming the most archaic of two-reeler plots (Porky and Daffy try to skip a hotel bill) into seven-minutes of unmatched cinematic brilliance. Transfer from Golden Collection Vol. 3. 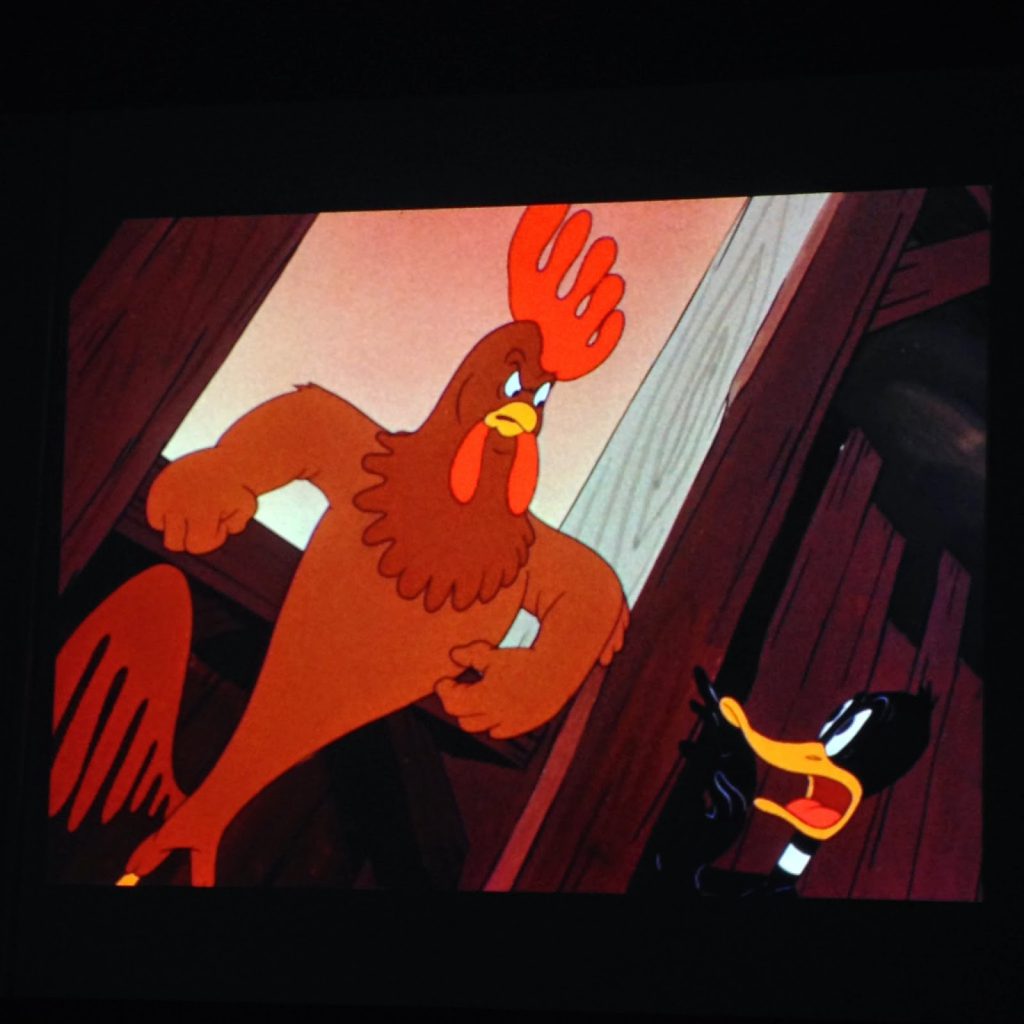 Cupid Elmer strikes Daffy with his arrow once again. Daffy is almost murdered when he tries to mate with a married hen. Transfer from Golden Collection Vol. 4.

Draftee Daffy (1945, Clampett)
Daffy gets his notice from the little man from the draft board; spends four minutes running around his house before winding up in Hell. Transfer from Golden Collection Vol. 3.

The Stupor Salesman (1948, Art Davis)
Salesman Daffy tries everything to sell something to Slug McSlug, who’s hiding out from the law. Transfer from Golden Collection Vol. 5.

Swooner Crooner (1944, Tashlin)
Porky needs eggs for victory, but his hens would rather listen to a Sinatra-type rooster; Crosby comes to the rescue. Animator Dick Bickenbach provided the Sinatra singing. Transfer from Golden Collection Vol. 3. 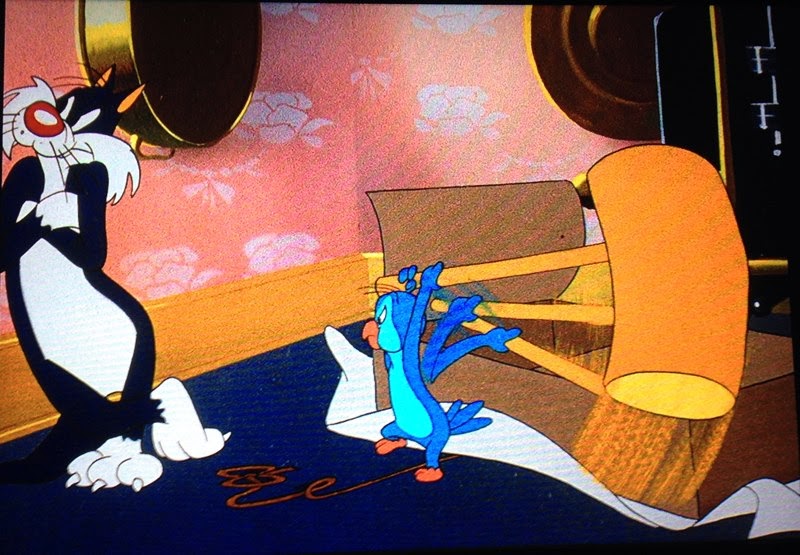 Sylvester makes his debut, reluctant to eat a suicidal lovebird. Beyond his coloring, the character was perfectly formed from the start, a testament of Freleng and writer Mike Maltese’s skill. New transfer. 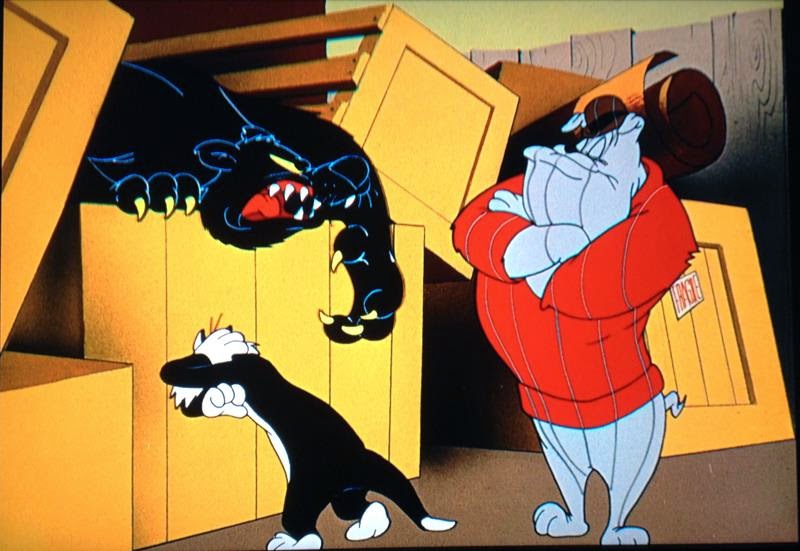 Tough-as-nails phony Spike and sycophantic Chester tangle with Sylvester and an escaped black panther. Listen to the audio commentary track for Draftee Daffy for the real-life Spike and Chester. New transfer.

Dog Pounded (1954, Freleng)
Freleng figures out how many ways the occupants of a dog pound can clobber Sylvester as he tries to catch Tweety. Transfer from Pepe Le Pew: Zee Best of Zee Best.

Mouse and Garden (1960, Freleng)
Sylvester and Sam (Daws Butler doing his Frank Fontaine voice) try to cheat each other out of a mouse breakfast. Transfer from Golden Collection Vol. 4. 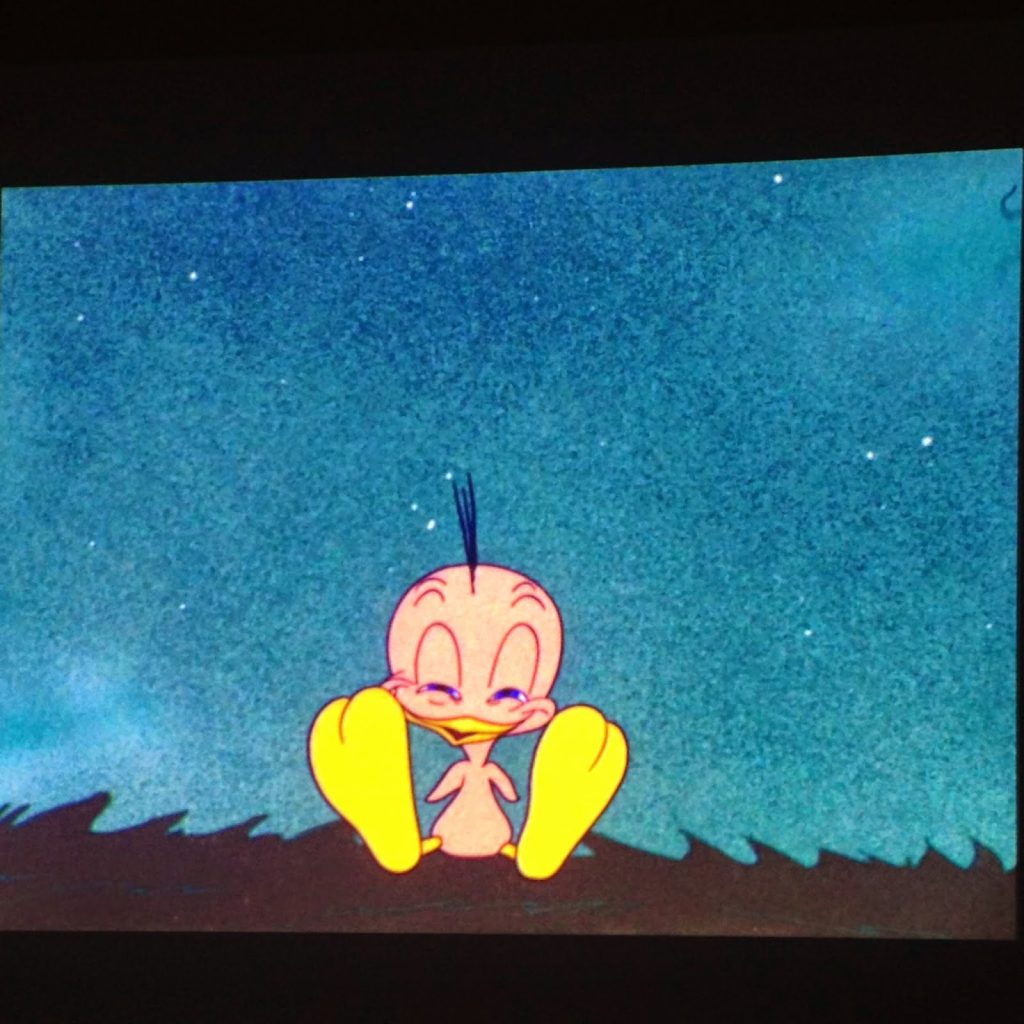 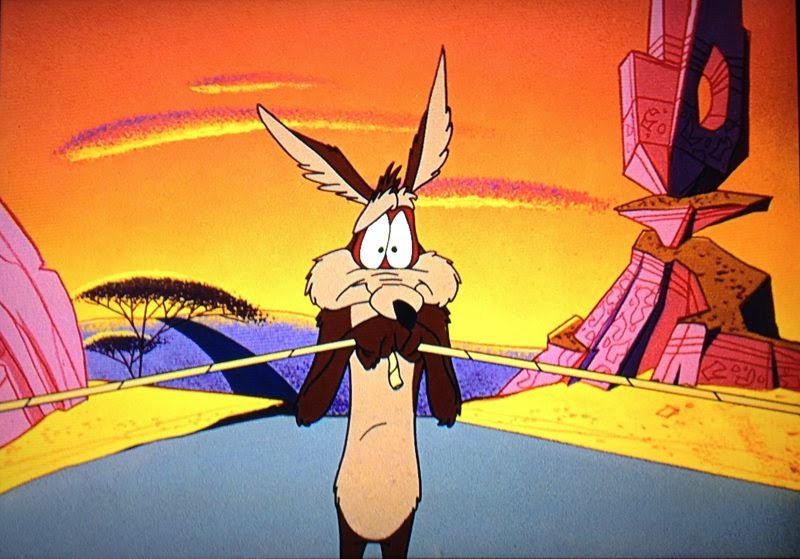 The Road Runner cartoon that was nominated for an Oscar. New transfer.

Rhapsody in Rivets (1941, Freleng)
The first of Freleng’s musicals, with the construction of a building staged like a concert.

Historian Jerry Beck laments this is the last volume for the foreseeable future, but never say never. The corporation is sitting on a literal goldmine, and they’ll certainly be digging out of it often.