In the latest issue of Afterlife With Archie, focus returns to teen hellraiser (literally) Sabrina Spellman, who has been isolated away from the zombie-apocalypse she created in the sleepy-suburban could-be-anywhere town of Riverdale.  Confused and seemingly sans marbles, Sabrina “Sawyer” is labeled a deeply-disturbed adolescent with no special powers, no witchipoo aunts and no abilities to raise the dead.

Under the care of Dr. Lovecraft, who may or may not have the occasional tentacle, she has been locked away in an asylum.

This recent development is in complete contrast to the last time readers saw the teenage witch, in which her succubi auntie duo had forced her to a nether realm after removing her mouth as penance for raising Jughead’s loyal furry friend Hot Dog from the dead.

As the teen struggles against her doctors, nurses and other Lovecraftian beasties that run the asylum, the comic ends with the white-haired wunderkind handcuffed to a rock, surrounded by members of the occult as they ready her for her marriage to Cthulhu. 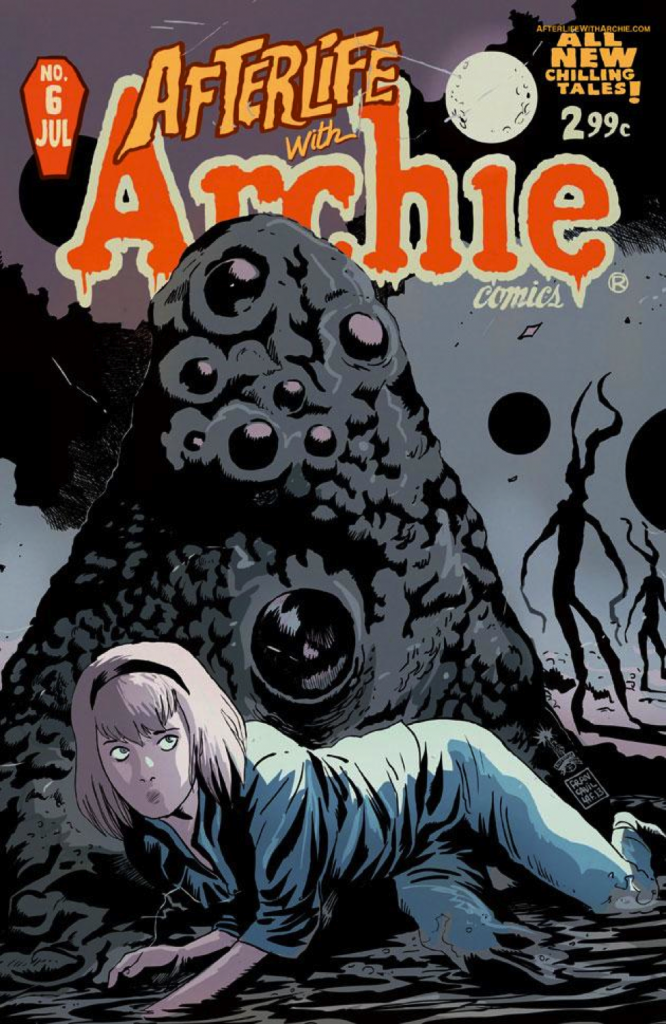 While her trademark white bangs and black headband remain, the latest incarnation of the America’s favorite teenage witch is breaking away from the kitsch that made her famous and preparing readers to the new Sabrina, which following the likes of modern superheroes, follows the one-time teenie bopper down a darker path filled with murder, mayhem and madness.

Small recap: Her first appearance in 1962 in Archie’s Funhouse set up Sabrina as an occasional zany character in the Archie world.

Born to a warlock and a mortal woman, but raised by spinster aunts Zelda and Hilda since a teen, Sabrina lived a somewhat normal teen life of dating Harvey, going to high school, attending dances and using her powers for to help others, but not very well.

For a kiddie funny book, Sabrina the Teen-Age Witch had her place and she did well with her audience of tween followers.

Sabrina’s ability to make Reggie trip occasional or re-fill the occasional milkshake was nothing spectacular.

For a while, she was no different than other Riverdale B players, like Cheryl Blossom or Jinx Mallory.

Her magic was just a plot device to shake things up in the hum-drum world of Archie when the band wasn’t on tour.

In the ‘70s, the character enjoy a minor resurgence when Sabrina joined the Frankie, Wolfie and the gang of The Groovie Goolies for “Rowan & Martin’s Laugh-In”-style guffaws for the Saturday morning sect.

Then in the ‘90s, the character received a popularity boost when Sabrina hit the primetime in a family-friendly comedy, complete with wise-cracking cat and laugh track.

In the sneak peak at the end of Afterlife With Archie, Sabrina’s mother is seen fighting for the her child as the newborn babe is wrestled from her arms by her husband’s coven. The experience drives her into madness. 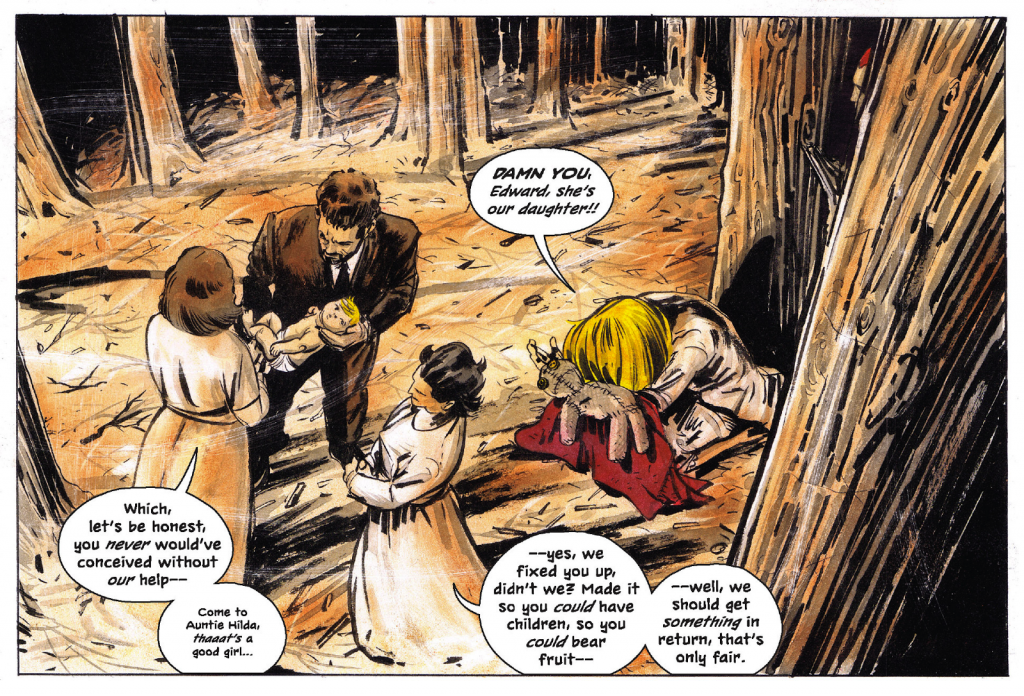 The character update is fitting for today’s audiences. Witches, along with anything supernatural, have been big for a while. And the world of Archie Comics is already taking risks, considering it has already both married off and killed its main character. Combining the two might have seemed like a jump-the-shark move at first, but the script and graphics made the book stand out. 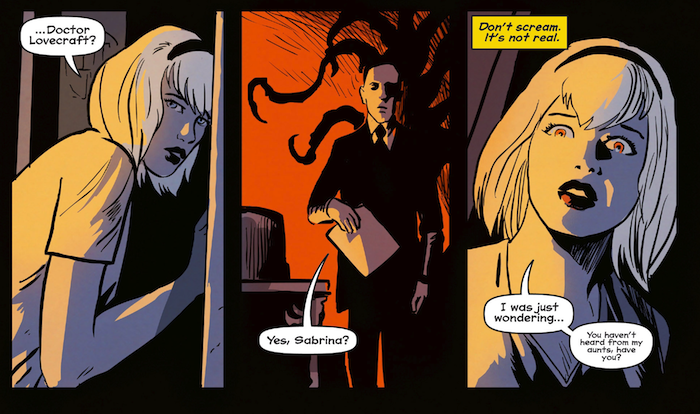 The first issues of Afterlife With Archie were a welcomed change to the Archie universe. It took a well-established realm of peachy-keen life that was familiar to most and turned it on its head. Even beyond giving the fair citizens of Riverdale a taste for human flesh, the brilliance of the book came from the development of the characters within the new zombiefied universe. Betty and Veronica’s rivalry/friendship was given new depth, the Blossom siblings’ relationship now have a spooky Flowers in the Attic connotations, Reggie’s jock meathead is given homophobic tendencies, lesbian cheerleaders…these modifications have modernize the characters more than any storyline or passing fad in the last 30 years.

It is a change that is both needed and welcomed to the Sabrina universe.

Cross your fingers for a film on this one.

The sneak peak of The Chilling Adventures of Sabrina is available in stores now in the back of the latest issue of Afterlife With Archie. 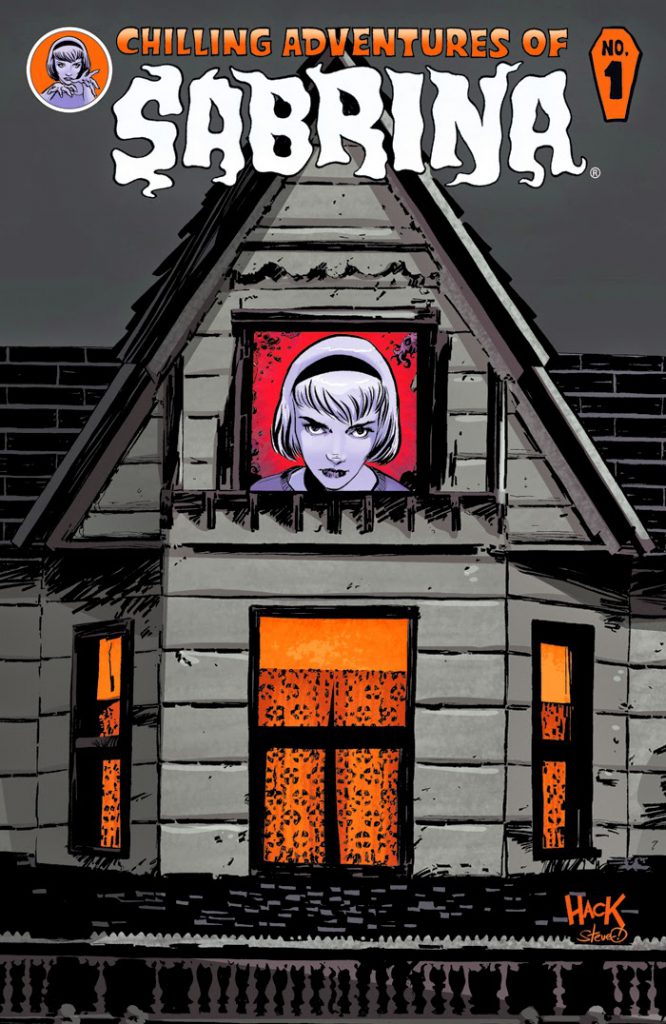 Chilling Adventures of Sabrina #1 is scheduled for release on October 8th.