Evilseed is the episode of He-Man and the Masters of the Universe that holds the distinction of being the number five best episode of season one as decreed by the fans. As such, it was included on the two-disc set of greatest He-Man episodes.

Evilseed is also nothing short of amazing, especially when you consider most episodes of the classic He-Man and the Masters of the Universe cartoon don’t hold up nearly as well as they do in our hearts and minds. 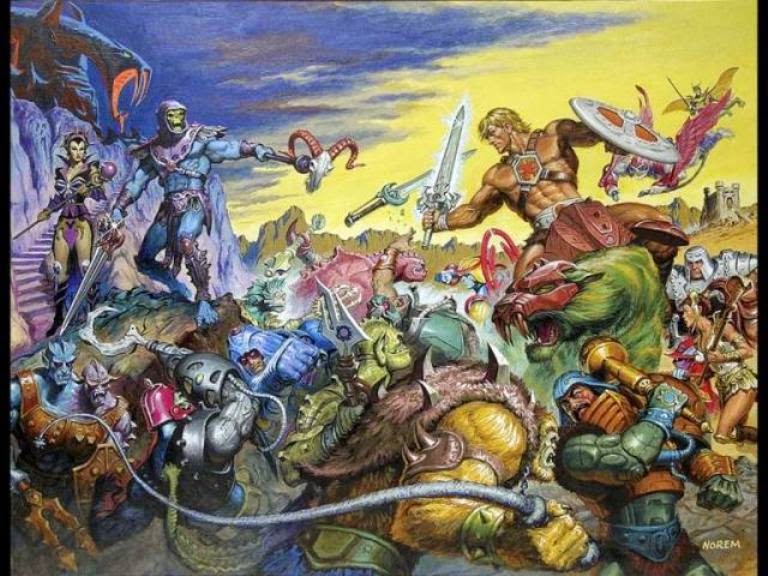 That being said, things actually start out pretty slow in this episode.

Prince Adam, Teela, and Orko are chilling at the palace, listening to that hardened warrior Man-At-Arms… bitch and moan about his allergies. 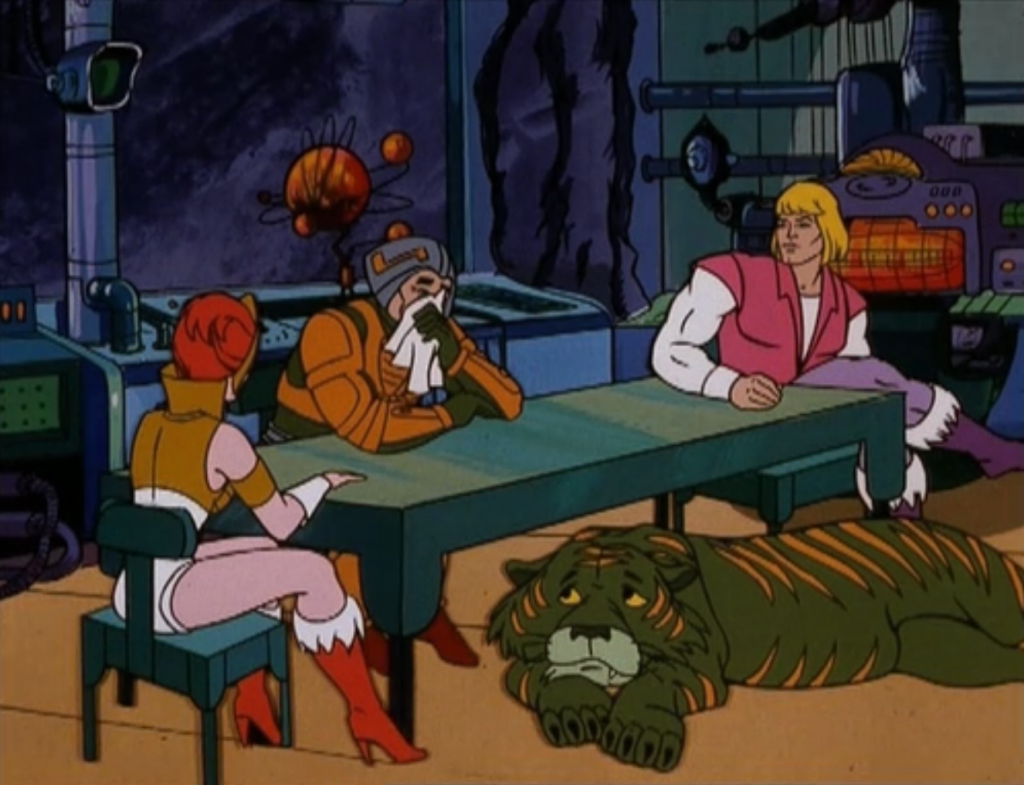 This complaining has clearly been going on for a while, as even his closest friends and daughter are starting to openly make mock him. Fortunately, all parties are saved from having to listen to an old man drone on and on about various particles negatively interacting with his system when an alarm sounds.

Everyone is saved as a village of dwarves is under siege from some vines, and these vines have already destroyed a dam.

Clearly, if ever there were a call to arms for the heroes of Eternia this is it. Man-at-Arms warms up to ramjet while Adam slips away to become… HE-MAN!

Of course the flooding is stopped, and the gang of do-gooders proceed to interrogate the dwarves.

It seems a man in a hood came by, gave them some seeds and encouraged them to plant them. The dwarves don’t think there’s anything odd about mysterious figures giving them seeds to plant, even when these mysterious figures have bones for hands. 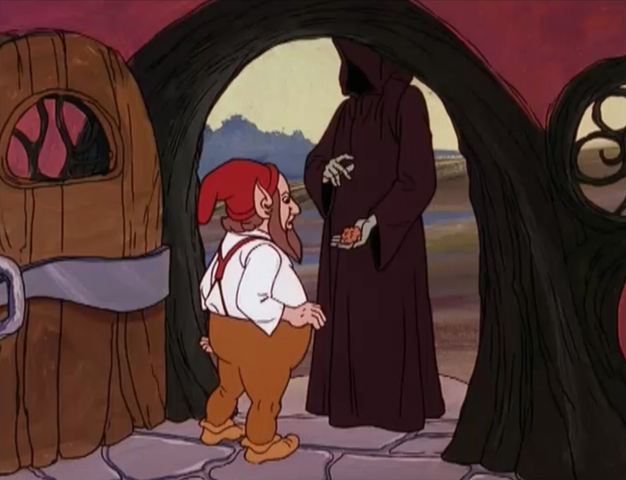 Maybe it’s because I don’t live in a mythical world where science and sorcery mingle to create wonders and horrors alike, but I still think a guy with a skeletal hand passing out seeds would be a giant red flag that something truly fucked is amiss.

But that’s just me. I live in Atlanta, GA. Things are different here. Plus, I can’t begrudge the dwarves too much, because other, supposedly smarter people fall for the same trick.

That’s right. See, this mysterious hooded figure also stopped by the royal palace while HE-MAN! was out, and persuaded the king and queen of Eternia to plant them on site.

I can kind of forgive the dwarves for falling for this trick. You get the distinct impression that dwarves are the hicks of Eternia. They’re an agrarian people. Simple folk, really. Farming people tend to worry about the harvest, locusts and… ya know… farm stuff. Pan-dimensional murder kings and the like are way outside their wheelhouse and it’s not like Eternia has CNN or Fox News that gives constant updates on the latest news from the War on Snake Mountain. But the king and queen, two people who know exactly the kind of shit that Eternia is capable of spawning? They should know by now that nothing good ever comes from people with boney hands. EVER. 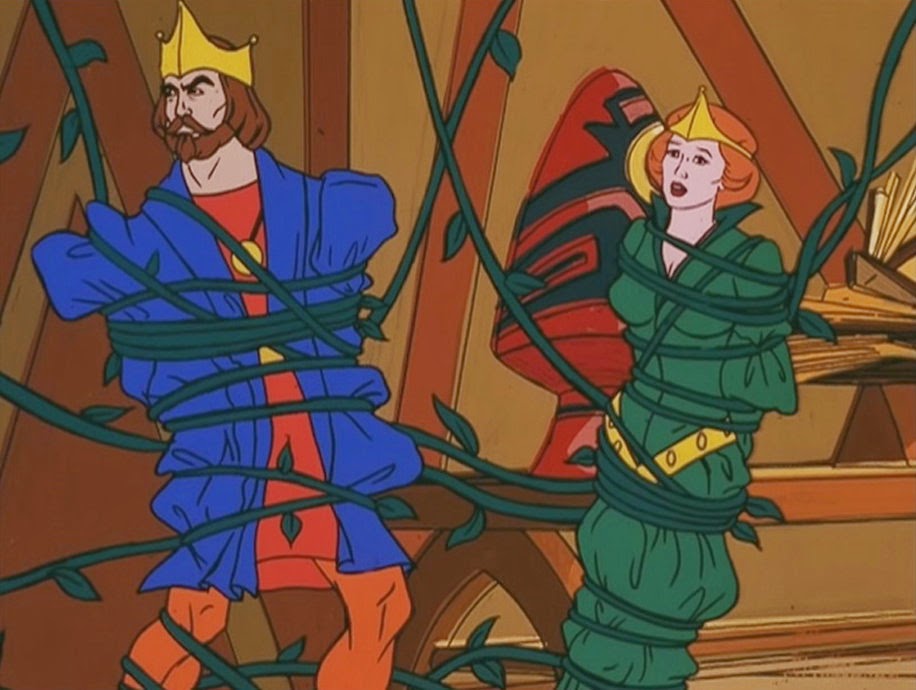 Now, all this talk of boney hands might have you thinking ol’ Skeletor is behind this vine infestation. If that’s what you’re, thinking, then clearly you’ve never seen Evilseed. That’s right, these evil plants are even laying siege to Snake Mountain and it’s evil lord. 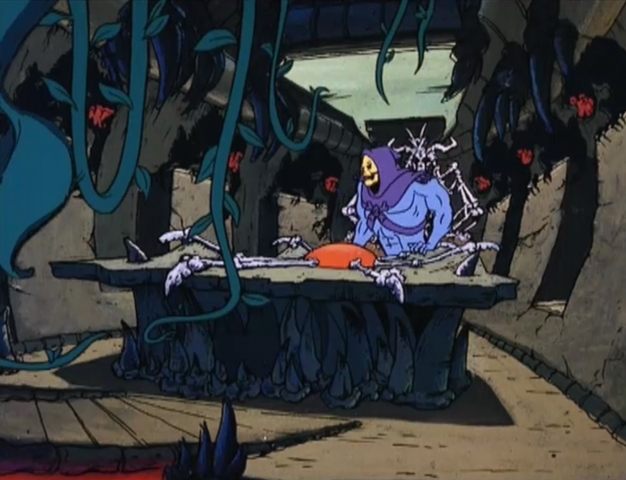 That’s right, there’s a new bad guy in town, and he goes by the name… wait for it… Evilseed. Evilseed is a pissed off, sentient plant that believes man’s “season” has passed and it’s high time the plants had a turn as Eternia’s dominant species. And, unlike Skeletor, this guy seems to be able to make good on his promise to subdue the planet and all it’s inhabitants.

Things, they are looking grim. So grim in fact, that none other than The Sorceress, the protector of Grayskull herself, is the first to come to a sober realization; if Evilseed is to be defeated, then HE-MAN! and Skeletor are going to have to have a classic team-up.

United, for the sake of the world, a plan is crafted and it’s so crazy, it just might work. The plan calls for HE-MAN! to be transported to the other side of the planet, where he’ll dislodge a glacier, toss it to the side of the world of the world he transported from, then transport back to help The Sorceress, Skeletor and Orko (yes, the master plan involves Orko) blast it into ice. The ice will rain down as snow and kill the plants. Easy as pie when you think about.

Things go as planned even though Skeletor, just to remind everyone he’s still a dick, breaks the machine that is supposed to transport HE-MAN! back to Grayskull, delaying the return of the hero.

But, things work out, and Skeletor goes against his nature to help the good guys get a win. Everyone survives. Except, of course, Evilseed, who dies a horrible death due to the cold. Really. It’s terrible. The guy goes down in agony, cursing all who stood against him in his final breath. Skeletor heads back to Snake Mountain, vowing to destroy HE-MAN! when next they meet (the usual Skeletor  and then we get a lesson from Teela about the importance of working together.

Surprisingly, the lesson is pretty solid. According to Teela, if you work together, even when it’s with someone you hate, things can actually get done. 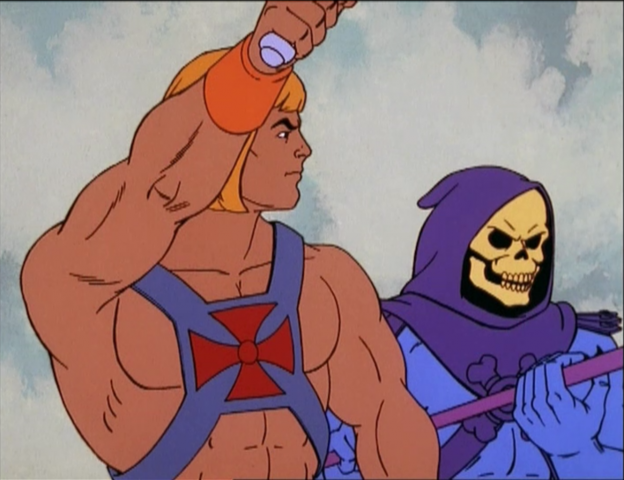 I think I’m going to mail this DVD to my congressman.

If Skeletor can and HE-MAN! can work together to defeat a sentient plant, then I don’t see why my Republican representative can’t at least hear out his Democratic counterpart from Illinois.

In this article:Animation/Anime, Masters of The Universe, Nostalgia, Politics, Television, Written by Chris Brennaman