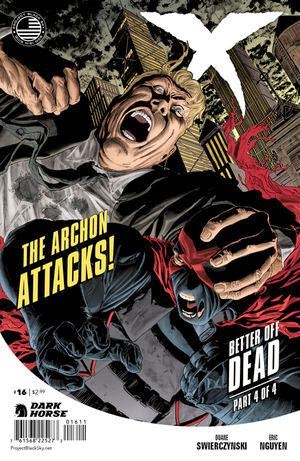 Whether it’s the over the top world of WWE or the caged combat of the UFC, I love watching a good throwdown.

Duane Swierczynski and Eric Nguyen masterfully crafted a brutal encounter that is viciously impressive to watch unfold. X is for the most part, a brutal killing machine version of Batman.

This makes the lowlifes of Arcadia go to even more desperate lengths than most villains to rid themselves of their vigilante problem.

Enter Archon, a well-tailored Adonis with uncanny speed and supreme fighting acumen, and X is suddenly faced with his gravest challenge. The fight was exquisitely brutal on all fronts.

The page layouts with visuals displaying Archon’s swift muscle memory and striking proficiency was scary and felt as if I was transported to the abandoned warehouse where it all took place. I love the scene where X pulls out his gun and Archon darts across the room and takes it apart before the trigger is pulled.

That set up some similar moments afterwards where X grows increasingly desperate with each punch he’s beaten to. The setup to this encounter was also well done as the hype sounding the beating X was in store for carried a credibility of consequence. The ending leaves things in in the air, which enhanced the level of uncertainty we normally see in this series. Archon has been positioned as someone who only shows up when it’s worth his time, so the stench of a sound defeat will haunt X for a while. 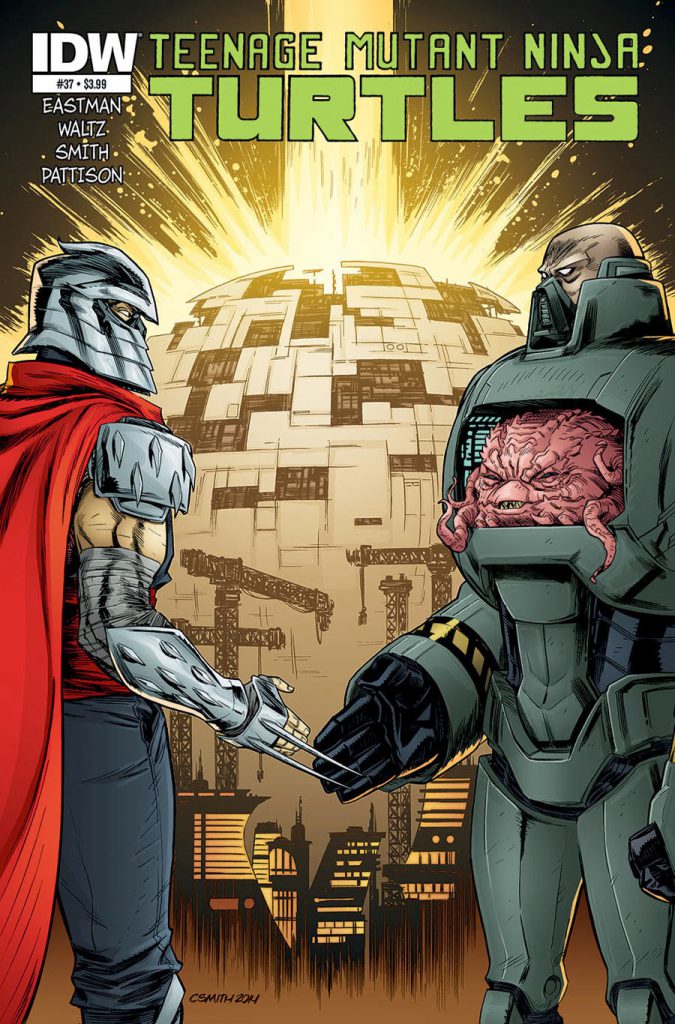 I grew up watching the late 80’s Turtles cartoon, so seeing Shredder and Krang as adversaries is a fresh concept to me.

Still, throughout this series, you knew this face to face was only a matter of time. They both want to rule the world, but the big brain from Dimension X has no use for humanity while Shedder does…..he wants to enslave them.

This sort of brings a philosophical vibe into the equation. What’s worse?

Seeing these two at the table, debate whose plan would actually reach finality was dastardly and amusing because they would throw threatening jabs at each other which is fitting for two supervillains. There were a few pages dedicated to Kitsune and Alopex and while there was nothing wrong with them, it took me out of the meeting I paid to see. Cory Smith did a fantastic job of setting the visual stage while presenting great character work.

The devious smile on Krang’s face, when he closed the proceedings was a thing of beauty and Ronda Pattison accentuated that BAM moment of surprise. It’s hard to put together a comic book without the titular characters involved. However, the creators of his series have done it on a few occasions and each outing has been more impressive than the next.

Everything that happens in this issue is not only a pleasure to watch, but it instantly gets you excited for what’s to come. You went in thinking one thing, and something totally different occurs. 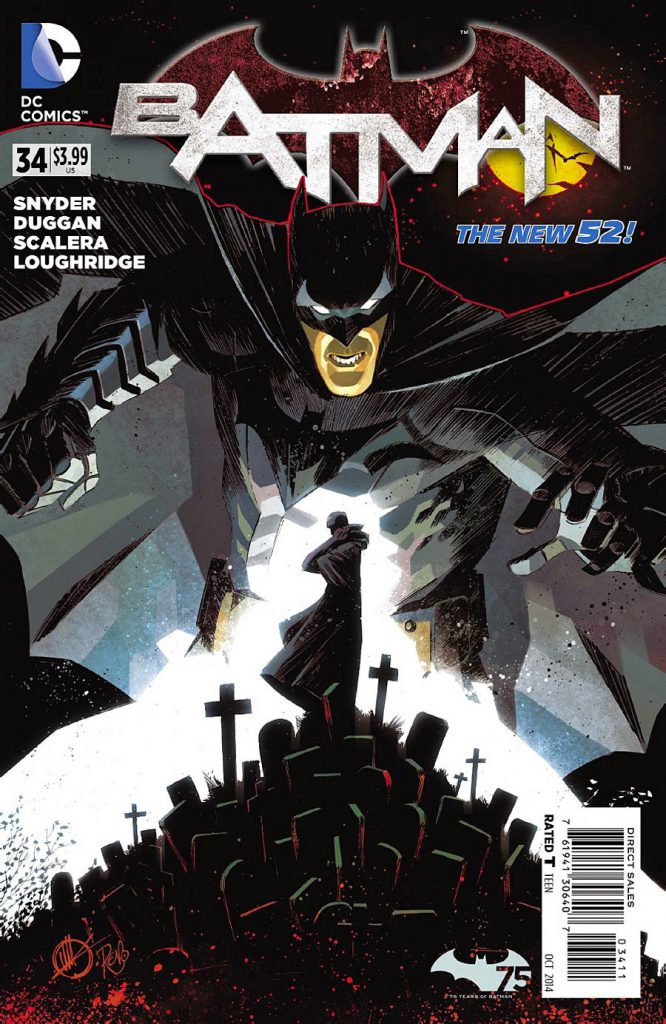 The first issue in a post in a post-Zero Year world brings self-contained tale without Greg Capullo and only a dash of Scott Snyder.

I know, I know, I did the same, “aww man, gosh darn it, and that’s whack” when I heard the news as well.

However, it turns out that absence of elite talent brings about the inclusion of some great creativity. The street level stories often show Batman at his best because you get all of the classic elements that made us fall in love with the Caped Crusader. Superheroes handle the big catastrophes so it’s nice to see some of the non-headline grabbing crimes get some attention, too.

The killer this time around is murdering those who he feels no one will remember. His motive is a reflection of how he looks at himself, which makes his obsession infinite.

Gerry Duggan does an excellent job at making this new character interesting by relaying how badly Batman wants to catch him. There is no big reveal, no shocking turn of events. The reason is pure, simple, and makes you cheer Batman even more, if that’s possible.

Batman doesn’t just save the day, he also turns the tide on the killer by reversing his ideology on him. It was easy, but so ridiculously effective. There is a panel in the lower left hand corner of a page near the end of the book where Batman smiles at his own handy work that made me say “YES” because that was his way of spitting in the face this maniacal presence. The ending was powerful because Batman did something he didn’t need to do which honored the forgotten. Thinking about whether or not you could do the same makes the moment stand out even more.

Zero Year had some hits and misses along the way, but I think it’s always a good proposition to have the main Bat title telling stories in the present. 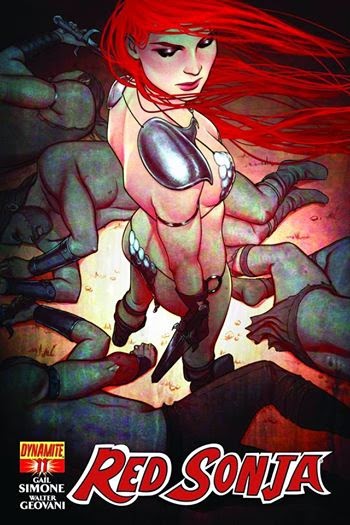 Banditry runs wild in the woods until the nefarious band picks the wrong pack to pillage and plunder.

Because they are under the protection of Red Sonja.

It’s funny how things work out in this series.

Some people just have the worst luck because the Red Devil is the last person anyone would want to mess with. After this little skirmish she enters a church in order to save an artisan who is being held captive.

Gail Simone does a wonderful job of highlighting Sonja’s heroic attributes while effectively showing her vulnerability. There were moments where I shared Sonja’s level of discomfort, which is a credit to how Simone grips the reader emotionally. If that’s not enough, Walter Geovani’s put together great visuals and awesome character work that brings everything to life.

If you haven’t jumped on the bandwagon as it relates to this series, do so immediately. Red Sonja is a fantastic read that gets better and better every month. 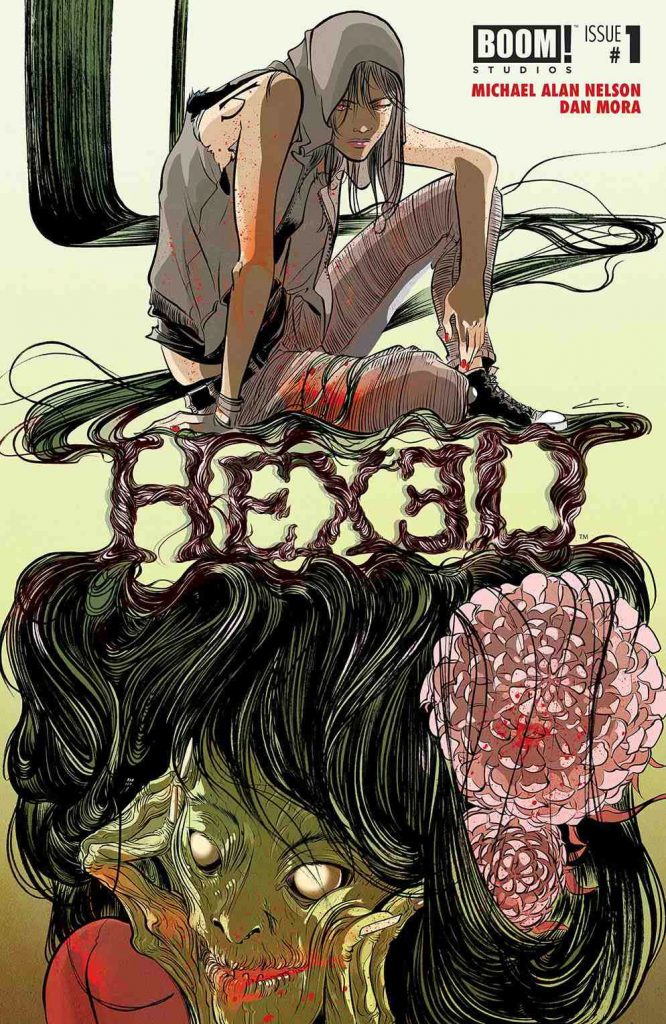 BOOM! Studios’ newest offering tells the story of a supernatural thief for hire who accidentally unleashes an evil spirit from a painting she stole.

The thief, Lucifer, is a cocky and headstrong young woman who is extremely talented in wielding her magic.

Her name might say otherwise, but she cares about others which is displayed when she attempts to save an innocent bystander who got caught in the crossfire of her mystic might.

The opening of this issue is extremely fun and sets a nice tone for the series.

Seeing Luci, I mean Lucifer, thwarting some ninja clad robbers was a delightfully crazy experience. Kudos to Dan Mora for producing some fun illustrations, but its Gabriel Cassata’s coloring is what makes the visual experience worth wild. Hexed starts off very strong and has a lot of good idea.

However, it kind of dwindles near its conclusion with a couple of head scratching moments that left me confused. Still, I had fun and I will give it another go next month.