Among the awesome rewards available in this Kickstarter-exclusive release, supporters can actually have artwork printed in the book.

Justin joins us today to talk about the campaign and what sets a PaperFilms project apart from the others in this interview promoting the Sex & Violence Volume 2 Kickstarter that’s running right now. 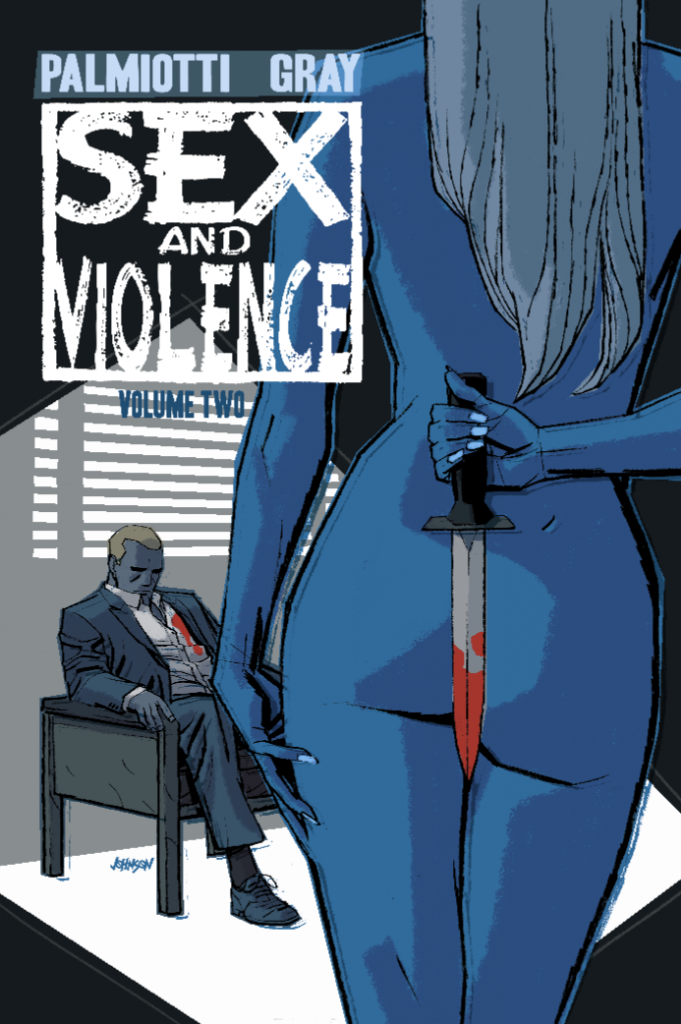 FOG!: Hi Justin, thanks for joining us today to talk about your Kickstarter for Sex & Violence #2. What does Kickstarter mean for PaperFilms?

Justin Gray: Kickstarter provides opportunities for us to create work that might not otherwise find a publisher. I believe it also provides us the opportunity to help grow an audience for material that would struggle in a mainstream marketplace, which is dominated by a specific genre.

Are more people bringing original content to Kickstarter first, in your opinion, rather than pitching to the big or smaller publishing houses? 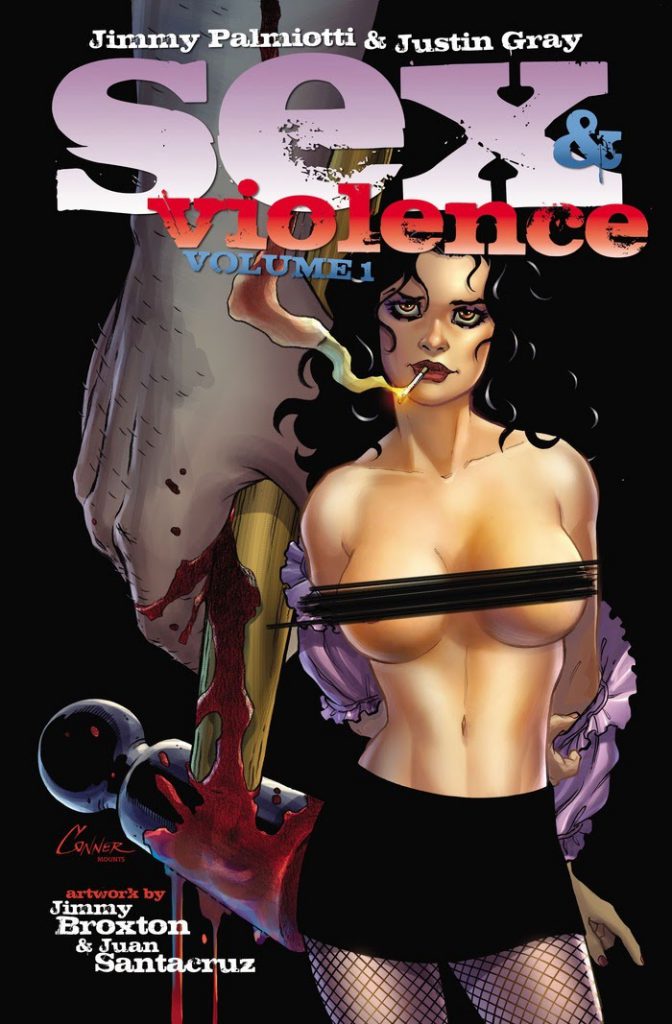 This is a complicated answer to a simple question. I believe people are bringing a lot of diverse content to Image Comics.

I think you’ll see less interest on the part of some creators in bringing new projects to larger publishers simply because of ownership and other restrictions. I think that’s obvious if you look at the recent number of high profile creators bringing their work to Image.

The reason why I mention Image is that there are few people that are both creative and business-minded.

Image does what the other publishers do behind the scenes with the exception of not taking a percentage of your creation.

Kickstarter is a business. You are the front and back of the house, the marketing, the production line, the packer and shipper. You don’t just deliver a finished product or part of the product and wait for a check.

I’ve spoken to people that admit they don’t have that level of commitment. I get it, but for us it works.

Sex & Violence Volume #1 was Kickstarter exclusive. Is this the same plan for Volume 2?

Yes, you can only get this volume of Sex & Violence through the Kickstarter campaign.

With your roster of talent and your team-up with Jimmy, it might be easier for you to get funded with your campaign. What I like about where you head with this are your choices for stretch goals. Care to tell us about how the $40k & $45k stretch goals will work for fans and artists?

This is really a Jimmy question but I can speak to the $40k pledge. We regularly discuss concepts for stretch goals and are trying to come up with innovative ways to make our supporters feel as special as we think they are.

The fact that we can get funding for a project is a great feeling and we try to forge a bond with everyone from the smallest pledge to the biggest.

The latest idea is to reach out to people that want to be even closer to the project by submitting art or photography within the central themes of Sex & Violence Volume 2. For the 5 winners in each category, we will credit each artist, photographer and or model and give them three copies of the book autographed by Amanda and Jimmy.

This is a unique way for us to interact with our supporters and give back in the process. 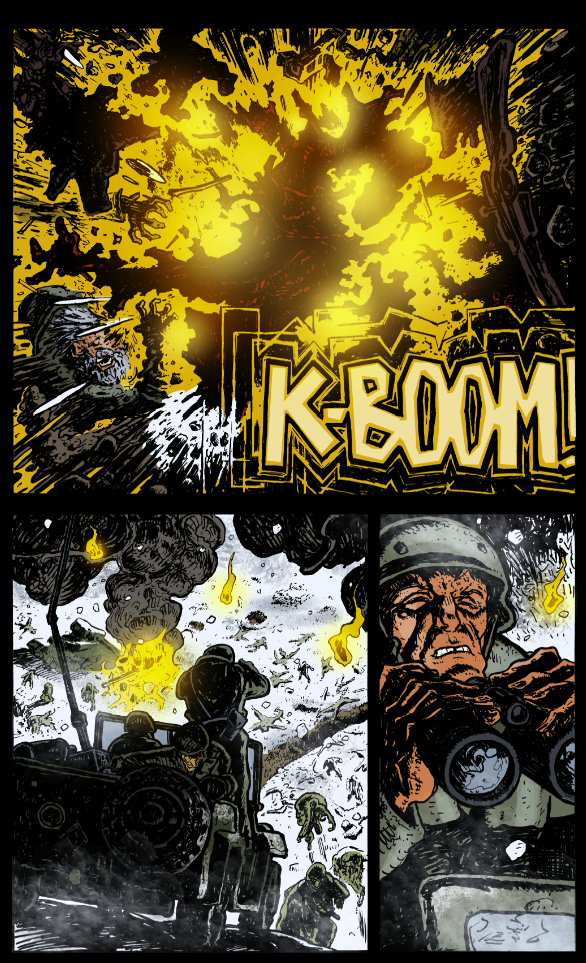 Alright, tell us about the three stories, one is yours, Red Dog Army. Do they follow any of the stories from Volume One or do they stand-alone?

They all stand alone and separate from the first volume. The idea all along was to work within the theme of the two in different ways.

For Pornland, which was my story in the first volume, artist Jimmy Broxton and I worked with both sex and violence.

In Red Dog Army, artist Rafa Garres and I are primarily focusing on violence as our theme in this case the violence of war.

This story is largely different from anything I’ve published to date and has a very unusual protagonist.

Kickstarter allows us to take risks and I want to do that by producing a story that gives the reader a different and hopefully unexpected experience.

Red Dog Army takes place during the Nazi invasion of Russia, but it is largely about dog trainer taken from his home and enlisted in the army to train animals to become suicide bombers.

While there is the backdrop of war it isn’t what I consider a war comic.

I think of it more as a human drama that happens in wartime.

Does Kickstarter impose or otherwise imply any censorship on your final product? I wouldn’t suspect that they would, but does a title of “Sex & Violence” get flagged at the submission process? 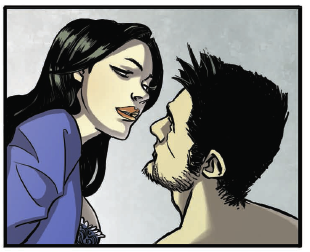 Not that I’m aware of. We’re not pushing pornography or gore, just the dying art of presenting material meant for adults.

Not to soapbox but you’ll notice that entertainment companies have been transforming nearly everything into a PG-13 rating.

That rating is essentially the new R rating not for complexity of human interaction but for language, violence and the occasional naked breast or poorly simulated sex scene.

To me adult means you have a greater perspective as a person than you did as a teenager or child. 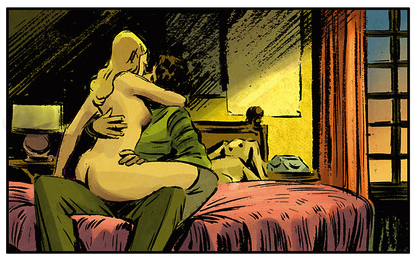 It is making the assumption that your life experience has moved to a place where you can appreciate and understand a wider array of concepts.

For generations the pop cultural trend has shifted from a clearly marked line between adults, children and teenagers to one where all three groups need to be served the same meal so to speak.

I’m reading the beautiful work in The Empty Man from Vanesa R. Del Rey, am familiar with the awesome color work by Paul Mounts. Care to tell readers about Rafa Garres (Jonah Hex) and Romina Moranelli (Women of Marvel) ?

I think it was in 2007 that Jimmy and I were in Mark Chiarello’s office, he’s the long time art director for DC Entertainment, and we saw Rafa’s work and lined him up with an issue of Jonah Hex. Rafa has a very pulpy, twisted and surreal look to his art and when I thought about Red Dog Army finally coming together I felt he was the best man for the job. He lends a gritty, violent and dreamlike quality to the story that changed the way I looked at it. I wanted it to look European, but not finessed.

Romina was someone Jimmy contacted that I was unaware of until I read his story and saw her beautiful work.

On a scale of Walt Disney to Larry Flint, just how dirty is Vol. 2?

Jimmy brought some Larry Flint to the table in this volume for sure although Jimmy’s stories aren’t sleazy. There’s no Disney anywhere to be found in this book.

What’s next for PaperFilms and where can we find out about the next Palmiotti/Gray title? I’m sure you can’t say much but congratulations and thanks are in order for your long run with Jonah Hex! 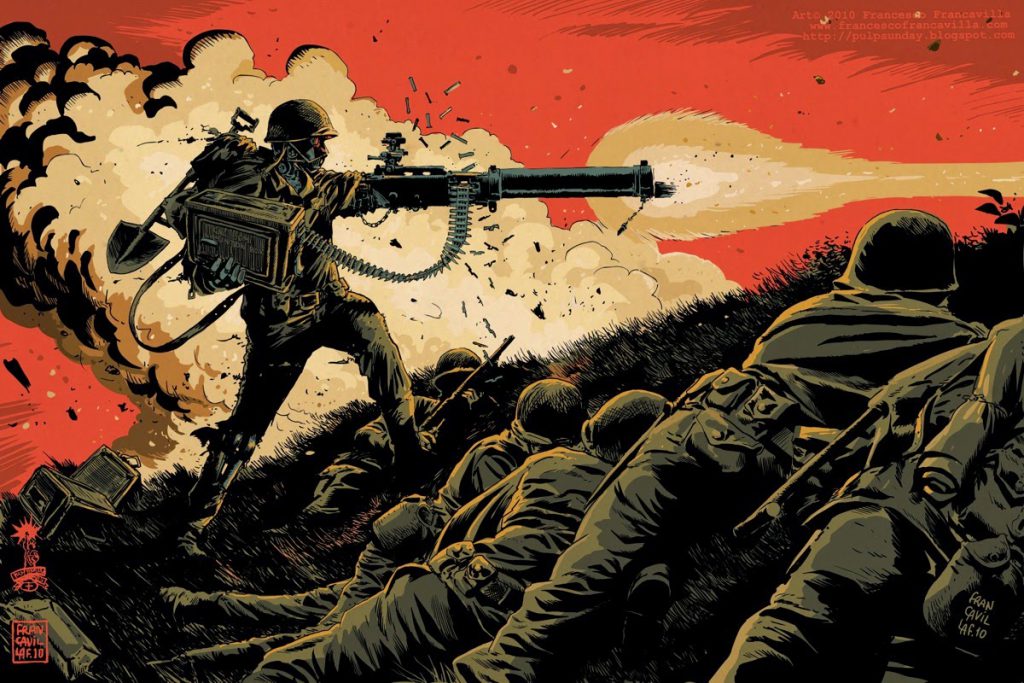 Thank you. It was a painful few months realizing our time with Jonah Hex had come to an end, but I feel like we had success beyond our wildest expectations. We’re currently writing G.I. Zombie with art by Scott Hampton for DC Entertainment and Wrestling with Demons is a part of the Dark Horse Presents anthology. I am writing a solo Lone Ranger comic with Artist Rey Villegas for Dynamite Entertainment that launches with a new number one this November.

What is the sexiest city and the country and in your opinion, the scariest city for crime?

I really couldn’t narrow it down or limit myself in terms of sexiest country or city. I’m not the kind of person that has a type or a look. Certainly there are places in the world where people place more emphasis on being physically attractive than other. That’s what I love about life and the world is diversity. With regard to crime there are certainly places that have terrifying drug cartels that slaughter people and leave them in the streets for people to see.

Then there are the humanitarian crimes, crimes against women, children and anyone considered different or in the minority taking place across the globe.

I’d much rather have a planet full of sex than one of violence.