We love it when a plan comes together! And we love when one Kickstarter project begets another…and another!

Joseph Schmakle was on the Treadmill back in November for Calamitous Black Devils and now has The Infernal Pact campaign running.

Put your earbuds to 11 for this heavy metal meth fueled ride into the darkness! 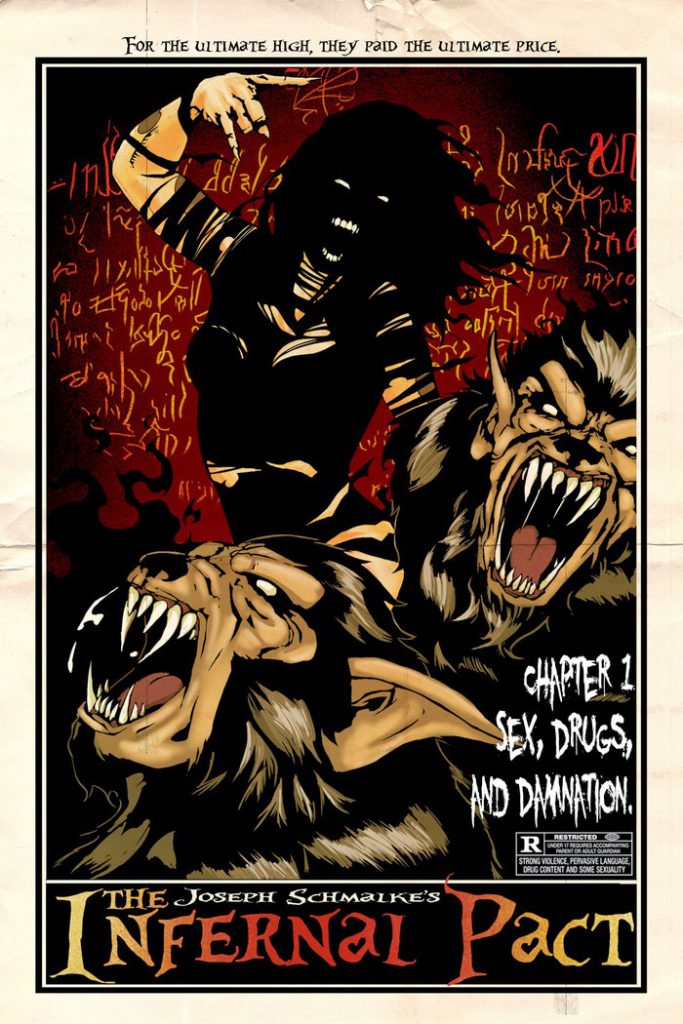 FOG!: Joe, it was really awesome to see you at Boston Comic Con. What was your show schedule this year and want to tell us about the Calamitous Black Devils’ launch?

Joseph Schmakle: So this year I’m concentrating more on creating my new comic book so I’ll just be doing local conventions for the rest of the year. Coming up I’ll be at Granite State Comic Con in Manchester New Hampshire and then at Bang Pop in Bangor Maine. 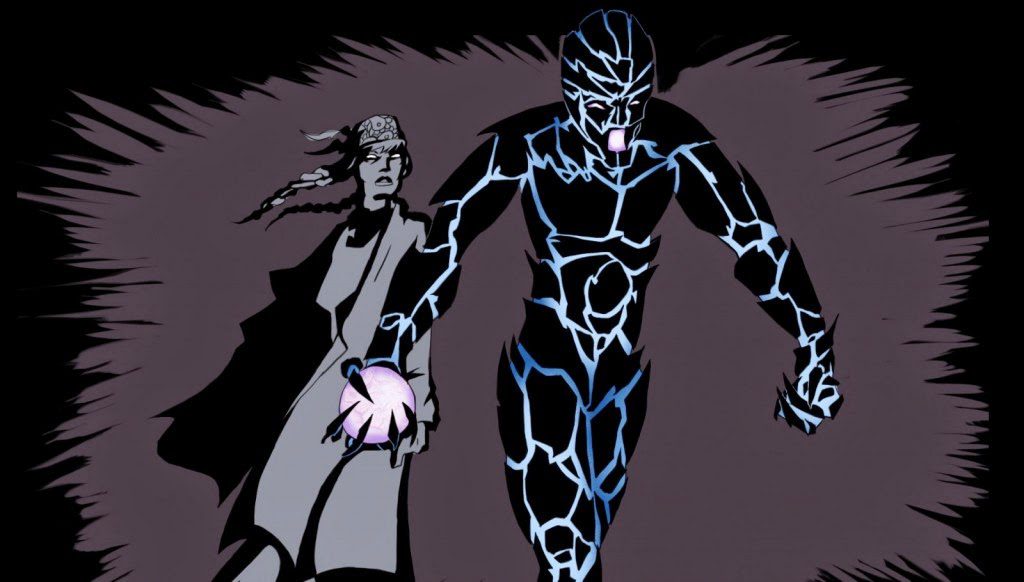 The launch of the Calamitous Black Devils is going really well. It’s been pretty positively received and I think people like the fact that they are getting a complete story with the one book. Eric Watkins Director of Operations at Broken Icon told me it was selling well at the conventions they have been attending. Broken Icon will have it with them for the rest of their convention year and their next show will be the Baltimore Comic Con.

You showed us some pages for The Infernal Pact. Awesome stuff, man. This book goes really dark. What can fans expect? 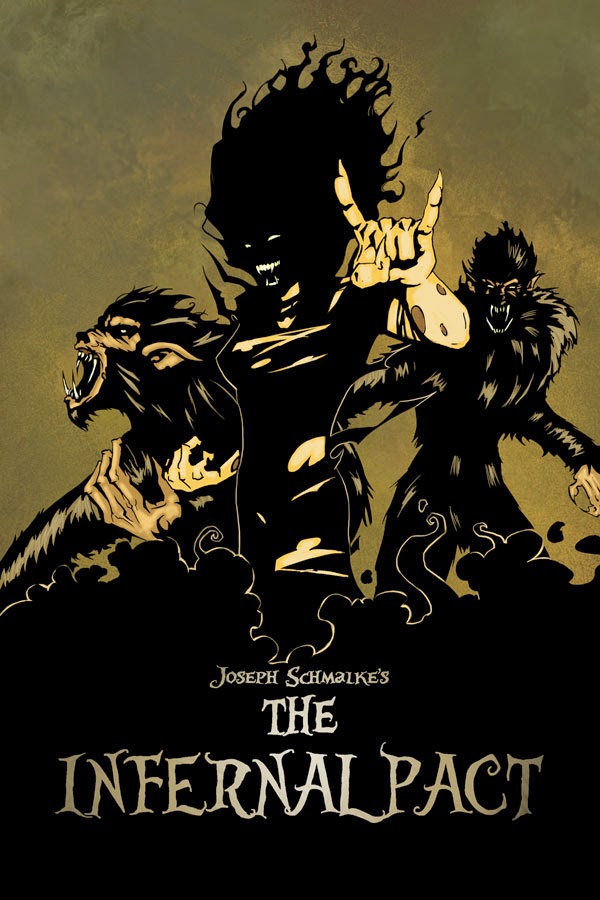 In The Infernal Pact three junkies sell their souls to a dealer thinking it’s no big deal.

They become convinced they have indeed lost their souls and are on a mission to get them back.

In their way, is a satanic biker gang, brain-eating zombies and a demon from the depths with its own agenda.

Finally, they must make their way to the bowels of Hell to break a deal with the Devil himself.

Also, the look of the book is physically going to be darker than the Calamitous Black Devils. As a fan of comics myself I’m pretty stoked to have Stephen Scott doing the cover for issue #2 and Charles Paul Wilson III doing the cover to issue #3.

What are your Hollywood influences for this Grindhouse tale?

My influences are too many to recount here but this is a short list. The 1970’s Grindhouse and horror movies like I Spit on Your Grave, The Satanic Rites of Dracula, Master of the Flying Guillotine, and Halloween, the 1980’s horror films: Don’t Go in the Woods, The Howling, 1990: The Bronx Warriors, Fright Night, A Nightmare on Elm Street, Return of the Living Dead and An American Werewolf in London. Finally in the 2000’s Requiem for a Dream, Planet Terror and the found footage horror movie VHS2. Most of these have sex, drugs, violence, over the top dialog, dark humor, and lots of bad choices being made.

What’s a good playlist to blast for you when drawing or inking pages?

Good question. I make a sort of play list for the projects I work on to help pump me up. Right now it consists of: AC/DC, Megadeth, Iron Maiden, Rob Zombie, NWA, Ice Cube and Dethklok. When I was drawing the Black Devils I was listening to a lot of Queen, Marilyn Manson, KISS, and Journey. I also listen to a lot of South Park episodes, and True Crime shows from Discovery while drawing.

Making something I would like to see in a Kickstarter is my favorite part of creating rewards and stretch goals. This time around my favorite reward is the Tijuana Bible that is a companion to issue #2. Sometimes you can put the cart before the horse with clothing, and trinkets. I like things that will directly relate to the book and give you a richer experience.

For stretch rewards the actual Infernal Pact. After doing some pricing I realized I could make it for everyone once I reach just a few hundred more than what I needed to print the books. It was my wife Hilarie’s idea and it’s going to be a pretty great print.

What’s in the Tijuana Bible? 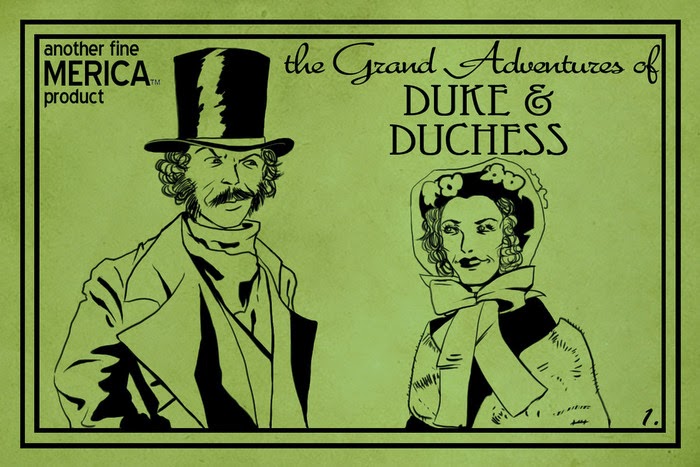 These things were pretty popular indy comic strips produced from the 20’s through the 60’s. I figured since this is an over the top world this would be their chosen reading material in that world. These Tijuana Bibles will be printed in limited quantity. Every Tijuana Bible will be signed and numbered.

Beyond the three issues of The Infernal Pact, is anything else on the burner for you?

Always, I’m currently writing another book and have another illustrator working on the artistic duties. It’s a sci-fi/horror story that takes place in the 1980’s and that’s all I’m saying on that for now.
After The Infernal Pact I’ll be making my first all age’s comic and it’s a super hero book.

Support the Kickstarter for The Infernal Pact HERE!