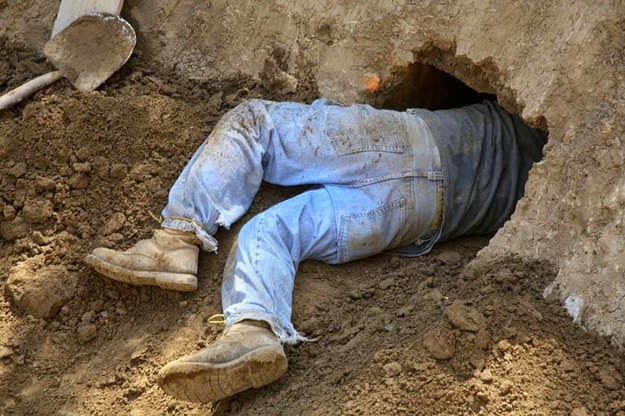 Patsy Kerr of Omagh, Ireland is a problem solver. Married to a wife who is a heavy snorer, Kerr decided that the best course of action to relieve himself of the noise was to dig a tunnel from under their bed to a nearby pub (which was about 800 ft from his house) while she was in a deep sleep. The task took him nearly fifteen years to accomplish and while that alone should be worth some points for perseverance, Kerr unfortunately found himself in court after it became apparent that he was the cause of a collapsed sewage pipe in his neighbor’s house.

At his court appearance Kerr explained his reasoning:

The wife has a bad snore on her and after watching the Shawshank Redemption on RTE one night in 1994, I decided to do something about it so I waited til she was in a deep sleep and then set about digging a hole under the bed in the direction of the pub. I used all manner of tools from spoons to a heavy duty tunnel boring machine I managed to sneak down there when she was at the shops.

It wasn’t until 2009 that I hit the jackpot and came up through the women’s toilet mop and bucket room.

To be honest I was sort of glad I was caught. She was always smelling drink off me in the morning and I was explaining it away as a natural odour. But recently I was finding myself singing rebel songs and stuff coming back up the tunnel and it was only a matter of time before I was caught anyhow. The landlord was also wondering how I was just appearing out of nowhere at the same time every night and disappearing from the women’s toilets.

You have to appreciate the bloke’s honesty.

But the best revelation of this story is not the fact that Patsy Kerr managed to complete this task without his wife ever knowing about it, it was her response to the judge when asked how she did not smell poo on her husband from the leaking sewage pipe (that was apparently struck while he was digging and slowly leaked into the tunnel for over five years before collapsing).

In a toast to the critically acclaimed and Emmy® Award-winning HBO drama Game of Thrones, California wine company Vintage Wine Estates has announced an exclusive...