If you ever had to stand in 98-degree heat with your daughter to meet a 19-year-old in a platinum wig, or knock over the elderly to be first in line for a shiny blue dress, then you know where you will be this September 28th…

That’s right, kids: Frozen makes its primetime debut on ABC’s Once Upon A Time.

The Mouse House-owned show about fractured fairy tales who live in modern times will cash in on the Frozen craze as Elsa makes her frosty debut in Storybrooke.

As seen in the trailer, the original ice queen is poised to become a misunderstood villain yet again, placing the small hamlet under an eternal winter, if you believe the trailer. 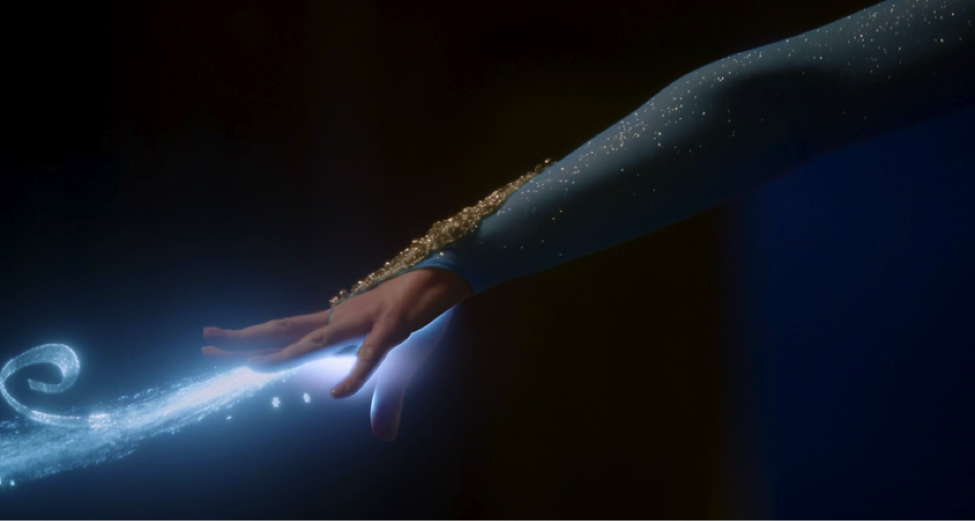 Everything surrounding the Frozen star’s appearance has been hush-hush so far. In the small Comic-Con teaser, Elsa (played by Georgina Haig) was seen holding hands with Anna (Elizabeth Lail) as they stood over their parents’ grave the night before Anna’s wedding to Kristoff.

Despite the fact that it sounds like the show just gave up and handed over the reigns to fanfic writers, one shouldn’t lose faith. Don’t forget: Lost and Tron: Legacy writers Edward Kitsis and Adam Horowitz are still at the helm. And those guys are friggin’ geniuses.

Over the last three years, they have managed to add a few twists and turns to the beloved Disney and fairytale characters. And by “twists and turns,” I mean, “go the Dynasty route.”

So before we find out that Elsa finally finished off Anna (NOTE: If this happens, just remember that I totally called it in this post), or Kristoff and Sven are a thing now, let’s take a look back at a few of the liberties that Once Upon A Time took with its characters.

Warning: Spoilers.  Many, many spoilers.

Mulan likes Aurora. Like, she likes her, likes her.

After playing off Mulan for the better part of the season as a woman who was under the spell of Prince Phillip, OUAT audiences found out that the feisty warrior princess was actually swooning for the drowsy damsel in distress.

Unfortunately, Aurora was all “blah blah blah pregnant blah blah blah happily ever after.” So, poor broken-hearted Mulan went to go join the Merry Men, which is a euphemism for “leave the network and go on another show.”

Belle fell head over heals in love not for a monster, but for the shady little imp Rumplestiltskin, who swept her away after striking a deal with her daddy to end a civil war of some sort (OUAT is sometimes a little light with the details).

Despite the fact that he kept her hostage, there was something about his sparkly green skin, his cackling laugh and the way he could nail down a curtain to a stone wall that apparently melted her heart.

Her textbook case of Stockholm Syndrome has been a major plot point for both the show and the good folks of Deviant Art.

Oh, Rumple is also the crocodile in the Peter Pan tale because of his skin affliction. If this show stays on the air long enough, we’re going to find out he was also the jaguar that ate Tarzan’s parents.

As it turns out, that red cloak wasn’t just a fashion forward accessory, but a necessity to keep Ruby from changing into a big, bad wolf.

Making Red Riding Hood a werewolf was an inspired piece of writing by turning a good girl an unintentional villain. Having her become a vampy goth in the modern age was just the cherry on top.

Saddest part? When she ate her hottie boyfriend Peter (Get it?) who was just trying to protect her. Also, she killed like half the village, but we never got any character development on them, so…poor, poor Peter.

Whale of a Tale

The writers of OUAT are cute with leaving little clues around town as to the former identities of the Storybrooke citizens. Ruby is Red Riding Hood, Regina is the Evil Queen (Regina is Latin for Queen)…you get the picture.

But Dr. Whale was a bit of a head scratcher. An early love interest for Mary Margaret, audiences were not given a lot of clues on the pompous doc.

As it turns out, “Whale” was a reference to James Whale, the director of Frankenstein…making the tow-headed medical practitioner Dr. Victor Frankenstein…

That’s not even a fairy tale.

It seems Regina summoned the fair doctor from the land of black and white to do a bit of her bidding. She got his medical expertise, he got a heart. And somehow, his little jaunt to the Enchanted Forest landed him within the curse’s reach.

Good news: His appearance on the show can possibly open the door to other fictional, yet not-quite fairytale-centric characters, like vampires and mummies.

I am so ready for an Elsa vs. Dracula throwdown in my life…

Once upon a time, Snow White and Prince Charming had a daughter named Emma, who they sent to New York. While she was there, she hooked up with Rumplestiltskin’s son, Baelfire, and had a son, Henry.

Rumplestiltskin, who also happens to be the son of Peter Pan, also once did the Miller’s Daughter.

She would later become the Queen of Hearts of Wonderland fame and the mother of the Evil Queen, who would later adopt Henry when Emma gave him up for adoption.

Also, the Evil Queen’s big sister was the Wicked Witch of the West, who was given away by the Queen of Hearts because she was born out of wedlock and that was the weirdest sentence I ever wrote.

Welcome to the wonderful world of Disney…as told by VC Andrews.

In this article:Adaptations, Disney, Fairy Tales, Once Upon a Time, Television