Even the president was an actor for godsake. 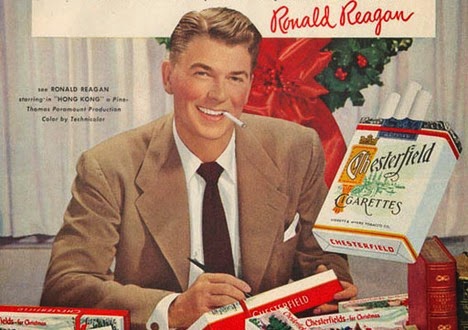 Many a movie are celebrating their 30th anniversaries this year and this hefty list encompasses just a handful of them. While everyone’s rehashed the same few flicks recently, I’d instead like to share some forgotten flicks and cult favies alongside the oft remembered big box office home-runs.

For you, my dear friend, I’ve gathered a dynamic list of wild films to revisit, re-watch, or, maybe if we’re lucky, discover for the first time!

So, let’s get down to business and get right to it, baby. 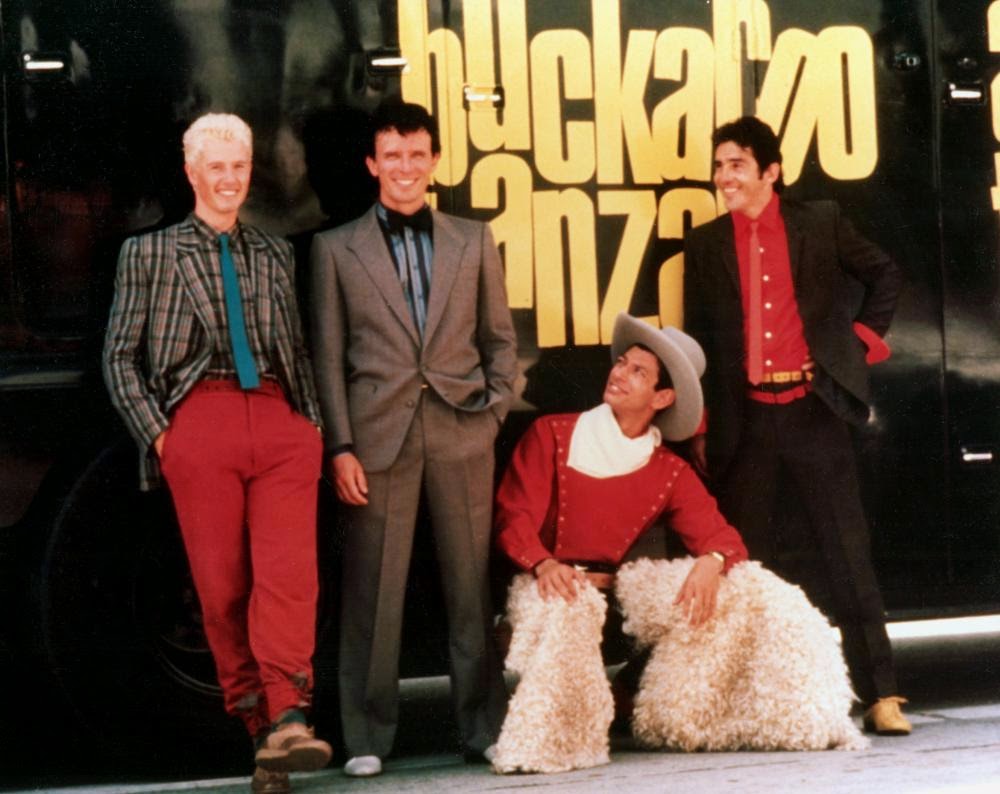 Not everyone can be an action hero. Or a surgeon. Or a famous rockstar.

Buckaroo Banzai? Why, he’s all three and a little bit more!

Utilizing only minor magazine advertising and spreading the word with BB merch at Star Trek cons, the film grossed roughly 6.2 million with received mixed reviews. It wasn’t a huge hit, clearly, but as time has gone on, fans have flocked to Buckaroo Banzai and with good reason. 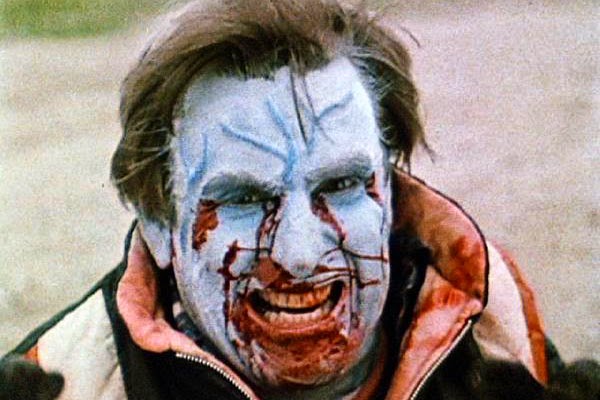 Something alien has consumed a handful of Texas’ citizens. When the mysterious evil kills them, the hardworking Americans come back from the dead and, boy, are they ever hungry for delicious people juices. Bloodsuckers from Outer Space is one of those “so bad it’s unusually good” movies.

Troll 2 comes to mind, but unlike Troll 2, BfOS is aware of itself as well as its contents. It’s kitschy, silly, and gory and you can tell the cast and crew had a blast making it.

I will admit, it’s not for everyone, but if you’re a person who can find humor in films like Plan 9 From Outer Space, then assuredly, this is a flick for you.

Part drama and part crime thriller, this creepy De Palma movie, starring Craig Wasson and Melanie Griffith, details a fledgling actors building interest in women. But, not to go on dates with them, oh no, he likes to watch them through windows.

This peeping tom, Jake, gets a little too zealous and ultimately finds himself wrapped up in a murderous mystery. De Palma had hoped for Body Double to contain multiple unsimulated sex scenes, but to his chagrin, Columbia Pictures unsurprisingly nixed the idea.

Important to note is Patrick Bateman lists this as one of his favorite films in Bret Easton Ellis’ classic American Psycho. A genuinely enjoyable movie that’s often glossed over by 1984s other massive box office hits, Body Double is more than worth revisiting.

The plot consists of a teacher and a handful of not always clothed students who go on a camping trip in search of a backwoods beast akin to Bigfoot. Uh, if I may be frank, this movie isn’t… um, good?

But, it is a hilarious viewing experience, especially when the Mystery Science Theater 3000 guys took it on in 1999. The director, Pierce, also wrote and chose to star in it. Such a humble gesture.

Or perhaps he was just trying to save money by not having to hire two more people. Savvy dough saving idea? 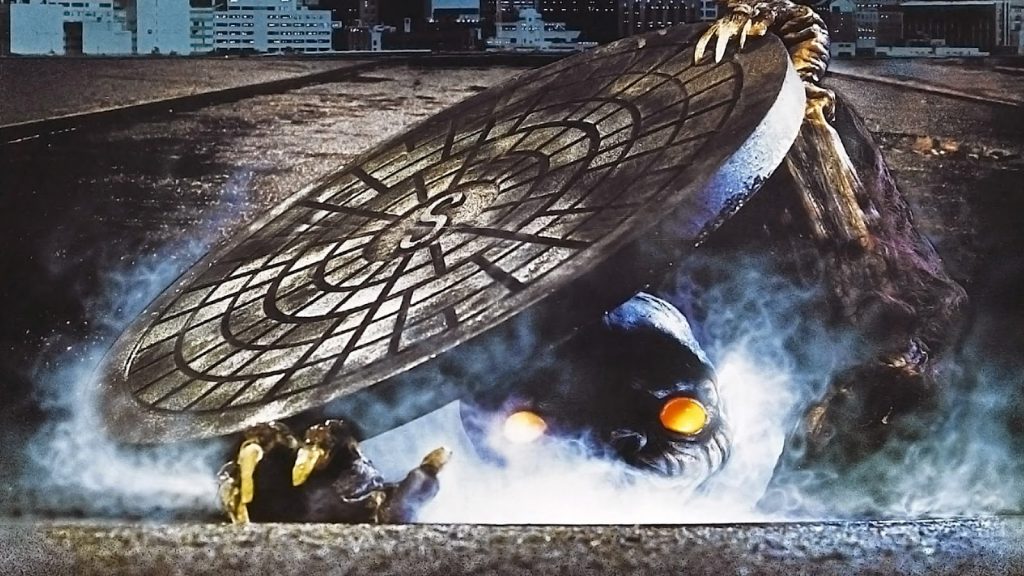 John Heard, Daniel Stern, and John Goodman all star in the gnarly greatness that is C.H.U.D., which stands for Cannibalistic Humanoid Underground Dweller. Mutated homeless people living in the sewers are ugly and they are pissed as hell. This cult horror classic has it all with loads of death, gore, and the government.

There’s even a C.H.U.D. joke in Ghostbusters II, a testament to this cinema wonder. 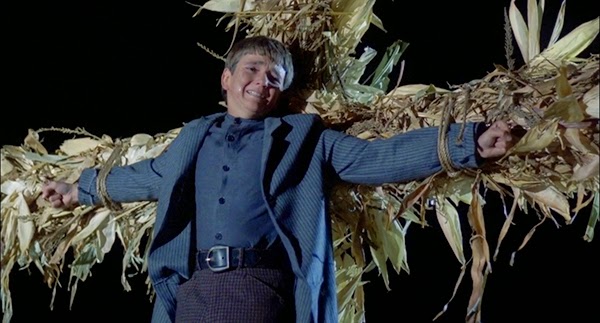 Maybe I’m an odd duck (old news, I know), but I actually love this film. I know even Stephen King thinks it’s unwatchable, but perhaps I hold it highly because it reminds me so much of my childhood.

One of the first horror flicks I ever saw, Children of the Corn will always possess a special place in my heart. Why? First, Linda Hamilton rules, no one can deny that. Second, Courtney Gains and John Franklin are a marvelously dubious duo.

While the acting throughout the film isn’t top notch per se, it has its creepy moments. What with kids getting hit by cars and killing themselves when they reach their 19th birthday and all. 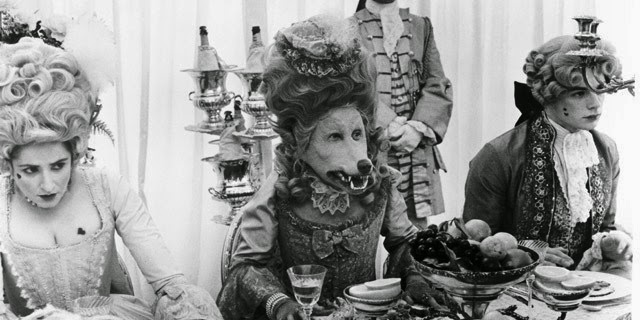 I stumbled upon this film in early high school. I remembered feeling weird for liking it when all the other girls were in love with stuff like 10 Things I Hate About You and She’s All That.

Nothing wrong with that, I mean who doesn’t love Laney Boggs? I’ve actually still got the tape I first watched The Company of Wolves on.

In fact, I’ve never seen it on anything besides VHS! Beautiful and grainy, I know I could never part with it. 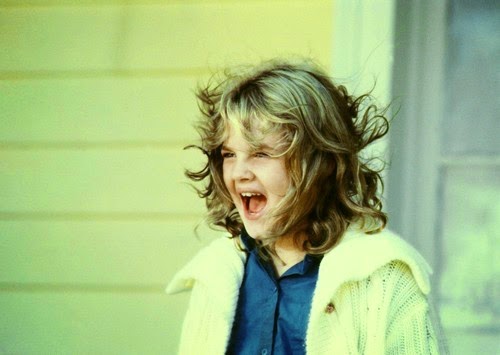 Drew Barrymore, Heather Locklear, and Martin Sheen star in this adaptation of Stephen King’s novel of the same name.

Charlie, Barrymore’s character, is actually based off of King’s own daughter, Naomi. Barrymore would go on to star in another King adaptation the very next year, Cat’s Eye.

In typical King-ian style, Firestarter is about a couple who have been experimented on and breed a little freak child with pyrokinesis.

And parents complain about kids knocking over drinks and not eating their food! Imagine a child who set her room on fire every time she didn’t want to clean it! 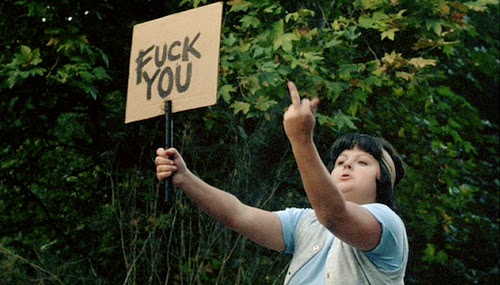 My second favorite in the F13 franchise (My first is Friday the 13th: Part 3D, don’t ask me why)!

As per usual, Jason really doesn’t like when kids, or anyone for that matter, has too much fun or, really, any variety of hanky panky. However, this one differs because it has a very young Crispin Glover in it and he steals the damn show.

This infamous dance scene is reason enough. Oddly, I did this at a club once and no one wanted wanted to dance with me. I wonder why… 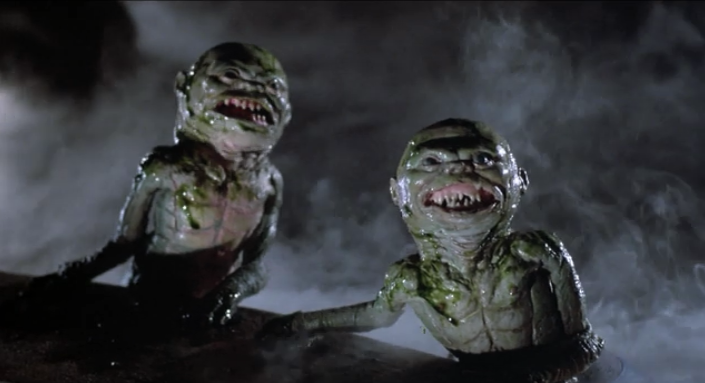 A couple move into a large mansion where goofy little demons, and some not so goofy and little, are a plenty. The Ghoulies themselves are awesome, wonderful special FX and puppetry.

So, I’m kind of cheating a little bit with this one, but there was no way I was going to pass up Ghoulies. Especially if Boggy Creek II made the list, for god sake. 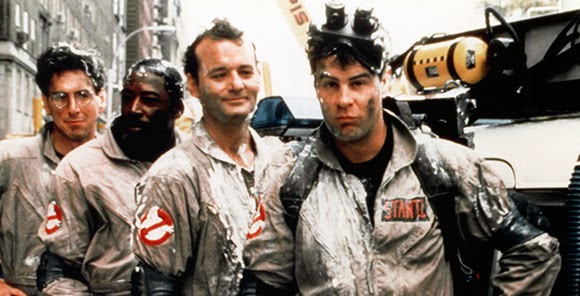 Ghostbusters is, clearly, the biggest box office hit of this list.

Movies, cartoon spin-offs, and merchandising up the wazoo. Perhaps the most celebrated out of this list as well, especially this year with the 30th anniversary Blu-ray release which, may I add, is absolutely beautiful. If you haven’t bought it yet, it is very, very important that you do.

It’s like watching a brand new movie with weird 1984 clothing.

I feel like a jackass detailing both Ghostbusters and Gremlins one right after another. They’re both such cherished classics.

As with the general public, Ghostbusters is more celebrated solely for it’s universal hugeness. But, Gremlins is nothing, and I stress nothing to write off just because Ghostbusters pulled ahead of it in the box office.

Although released during summer, it really is a horror holiday flick. The gremlins are aesthetically astounding and the plot is entertaining, silly, and charming. I know for a fact that Gremlins is on many horror fans watch lists during the holiday season. Myself included! 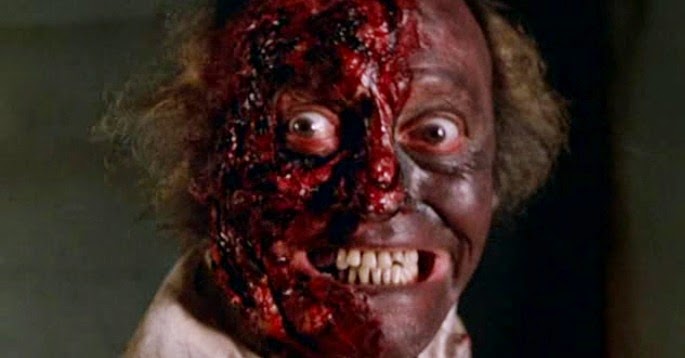 Once you know Fragasso had a hand in this movie, it all makes sense. (Oh man, I sure hope he doesn’t read these articles!) I have a weird relationship with Fragasso’s films. He is obviously a “one take” man and it shows. But, his no BS style of cutthroat filmmaking has its own unique flavor, one that’s certainly acquired. I’ve since acquired the crap out of it.

This film is not one the larger population is wont to remember, but I personally own it and love it. The plot entails a go-getter couple and a militaristic team who take on zombies in the jungle, cause, I mean, what else is there to do in the jungle anyway. Definitely a fun movie worth watching… if you dare.

What better way to wrap up part one of this massive list than with Fulci’s cinematic horror gem House by the Cemetery?

This is the third piece of Fulci’s trilogy, following City of the Living Dead (1980) and The Beyond (1981). A cast of truly unique characters are beautifully woven together through a series of tragic deaths. Take absolutely stellar visuals with an intriguing, complex plot, add the unforgettable special effects and you’ve got one hell of a film.

While not for the easily distracted or quickly queasy, House by the Cemetery is a quintessential cornerstone in Italian horror.

Well, that’ll wrap up the first fifteen movies of 30 Cult and Horror Flicks in 30 Minutes or Less, 1984 edition!

Stayed tuned when on Friday we unleash part two. Another fifteen for you to revolt in terror from, reminisce upon, and dote on all the films that 1984 bestowed on the masses!