As we know, 1984 unleashed a flood of movies unto the public. A handful of which were beautiful works of art and others that were, well, not so much.

If you didn’t catch Part One of this list, you can find it here.  Now, we’ve assembled fifteen more cult gems, foreign flicks, and unforgettable staples just for you.

I can’t think of a better day to reveal the final piece of this behemoth, so let’s dust off that VCR and get down to brass tacks, shall we? 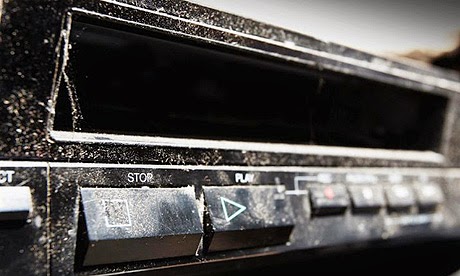 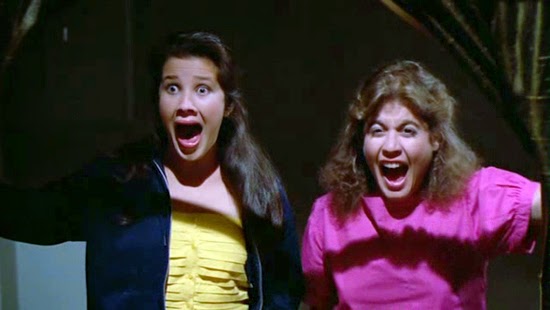 I may be extra partial to this one because it stars the always entertaining Clu Gulager and Daphne Zuniga, who also played Princess Vespa in Spaceballs. The one itself isn’t life changing, but it is an enjoyable, albeit occasionally manilla, movie. After being locked in a mall overnight, a group of attractive young ladies are being picked off by a mysterious, yet mildly creative, killer.

I can’t say it’s a total shame seeing as the world really doesn’t need anymore sorority sisters in it. 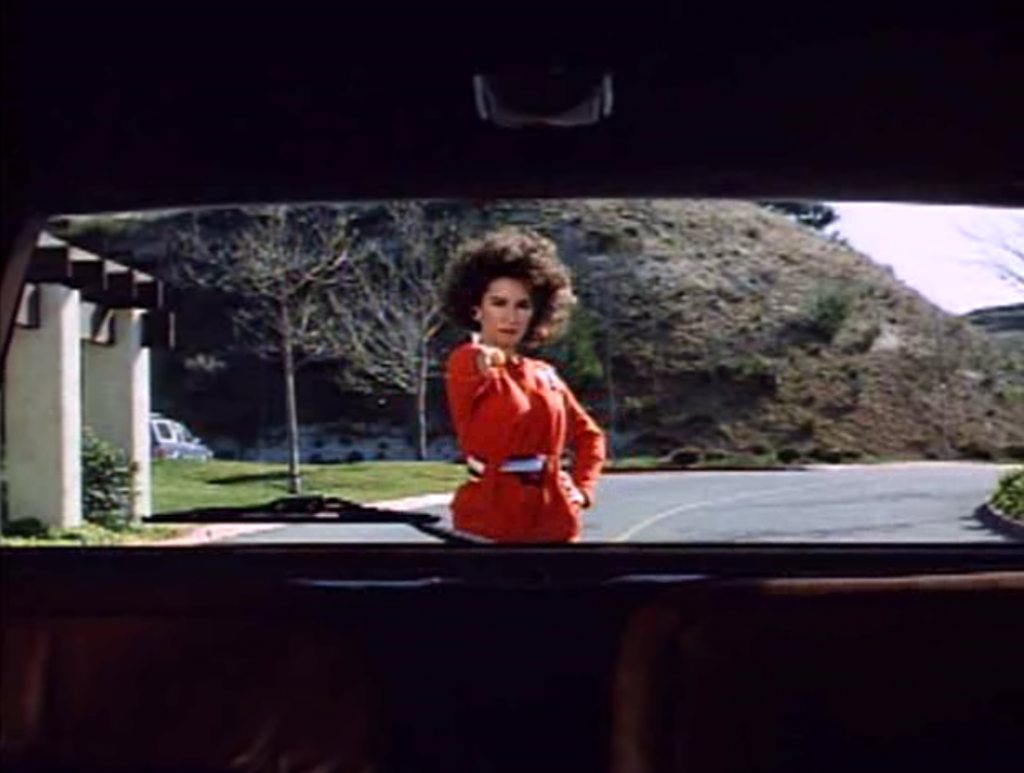 Hey, never said we couldn’t have a TV movie on the list! It was even nominated for a Primetime Emmy, but we all know that doesn’t mean a whole lot. It features actors Robert Urich, Susan Lucci, and Soleil Moon Frye aka Punky Brewster. There’s some pretty hefty “computer technology” in Invitation to Hell.

I should mention I am heavily, heavily laying on the sarcasm here.

The plot is a wanderer, but it’s enjoyable to watch even still. Kind of like an episode of MST3K without the commentary. 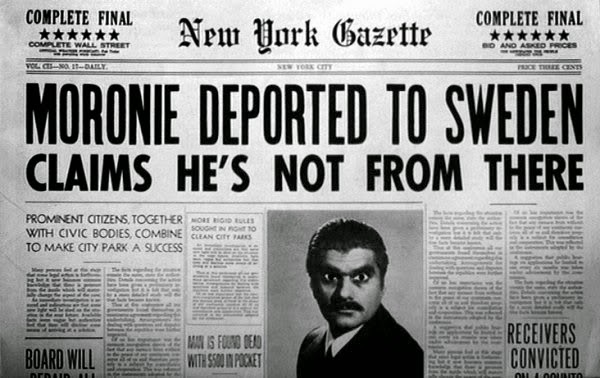 Johnny Dangerously is one of my all-time favorite cult comedies, hence my Xbox gamertag and Twitter handle, katedangerously.

It always shocks me when I meet someone who’s never seen it. Heckerling also directed Fast Times at Ridgemont High and Clueless, just two more comedy classics, is a wonderful, playful director and writer.

Johnny Dangerously chronicles the main character of the same name as he climbs the ranks through a stereotypical gangster scene. Michael Keaton, Joe Piscopo, Marilu Henner, Peter Boyle and my beloved, Griffin Dunne, all star in this hilarious, but largely overlooked movie. If you dig Mel Brooks movies and have yet to see this one, it is a necessity that you watch it. 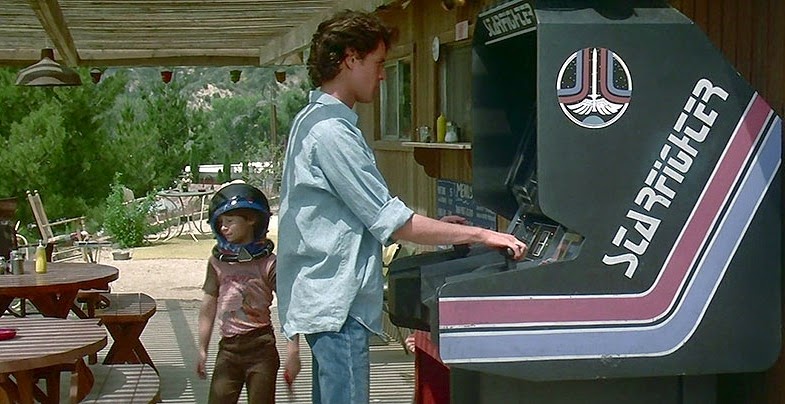 Lance Guest, who plays the main character, Alex, is seriously so cool.

He was also in Halloween II as one of the paramedics which really only adds to his overwhelming coolness.

I consider myself very lucky as I got to hang out with him for an extended period of time at a horror con, roughly a year ago. He sat with me outside and he spoke about how since The Last Starfighter he’s spent a lot of time focusing on theater. He even acted as Johnny Cash in Million Dollar Quartet! It’s so rare, especially in the convention community, to meet relaxed, down to earth actors who still pursue their passions.

Now, that I’ve prefaced the hell out of The Last Starfighter, the plot focuses on Alex who finally acquires the highest score on a game called, of course, Starfighter. When the creator of the game makes contact with Alex, he is commandeered for a large scale fight among the stars. The Last Starfighter is one of the first films to use CGI, but it looks surprisingly good. Better than Godzilla 1998 anyhow! 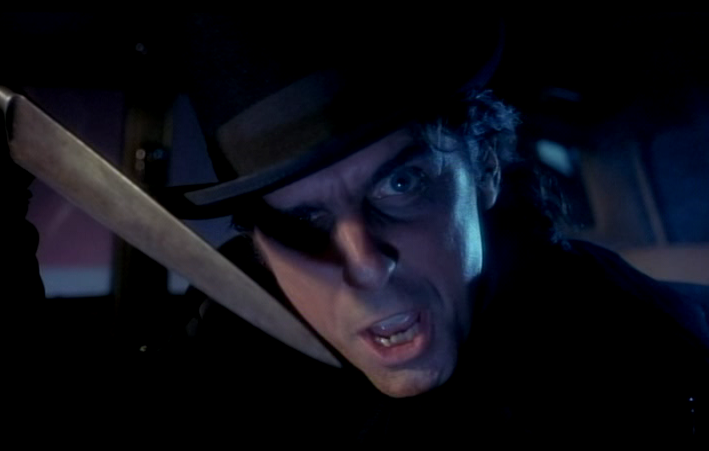 A Spanish horror film by an easily frustrated Italian director, sounds like a blast!

I’ve covered this movie for Forces of Geek before, so I’ll keep it brief. Alice Cooper acts as a popular rock musician, startling I know. When Vince Raven (Cooper) goes back home to record a music video, he finds the town is in disarray and supernatural occurrences are bountiful. It really is a spooky movie with that unique Fragasso touch.

Oh, and I know I’ve posted this unforgettable video before, but it’s so good I could never in good conscience pass up the opportunity to share this perfection. 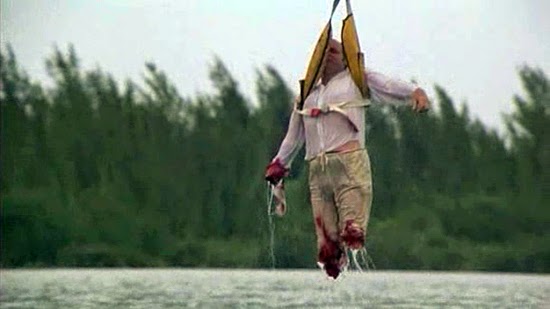 Monster Shark, better known as Devil Fish, is, how shall I put this politely, an unusual movie. The shark really doesn’t look like a shark, but it is pretty gnarly and prehistoric looking.

Clearly, Monster Shark makes an attempt to ride the waves left in the wake of Jaws astronomical success, but misses the mark. And by a real long shot, too. However, the effects are not all bad. In fact, I’d go so far as to say that they’re pretty good for what it is.

As it seems, 1984 was a pretty good year for would be MST3K movies and Monster Shark, too, would fall to the sharp tongues of the rapier witted robots just over a decade later. If you choose to watch it, you’d be smart to do so with the MST3K version.

Save yourself the pain and have a laugh. 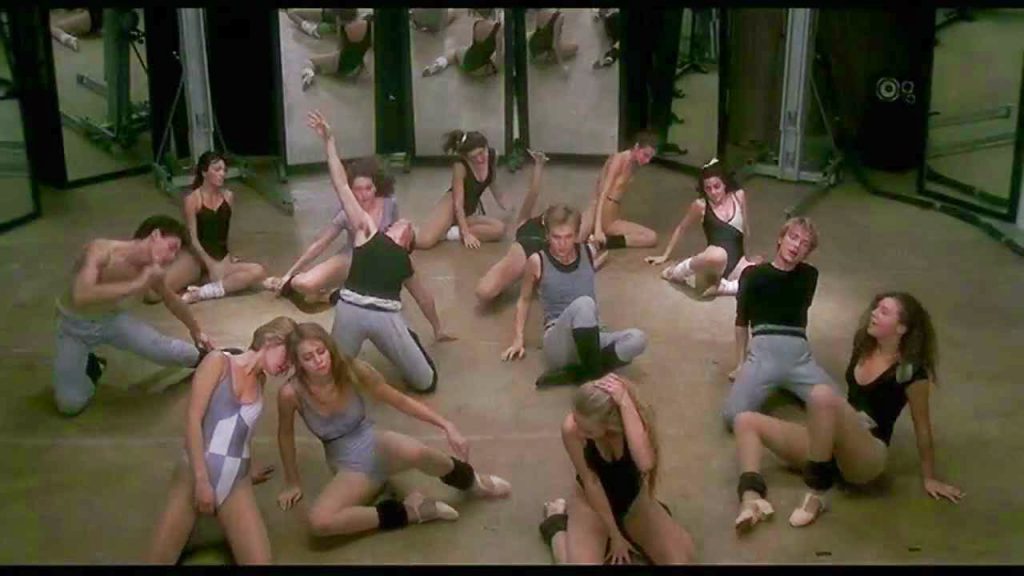 MR:DD cannot be described as anything other than a gory Giallo rendition of Flashdance with lots of boobies, slapping, and needles.

It’s a really fun Italian horror flick where a bunch of dancers get killed, obviously. Geretta Geretta and Olga Karlatos, who also appears in Purple Rain, star in this kicky picture. Although this one’s not as popular as Fulci’s other hits, such as Don’t Torture a Duckling or The Beyond, Murder Rock: Dancing Death is an amusing movie with inventive death scenes. The dancing is hilariously ridiculous and the music is equally so.

I love this kind of stuff and I would be blown away if you didn’t too! 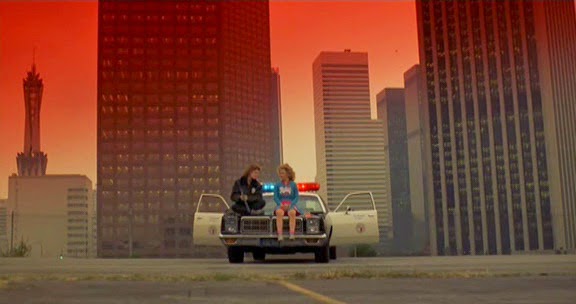 Night of the Comet is definitely a fan favorite among the horror crowd. This alien-apocalyptic-zombie comedy has wonderful visual effects as well as a cast that really plays well off one another.

Although Heather Langenkamp had auditioned for the role of Sam, it went to Kelly Maroney instead who did a wonderful job with it. Joss Whedon has gone on record saying that this film had a large impact on him and largely inspired portions of his script for the Buffy the Vampire Slayer movie. 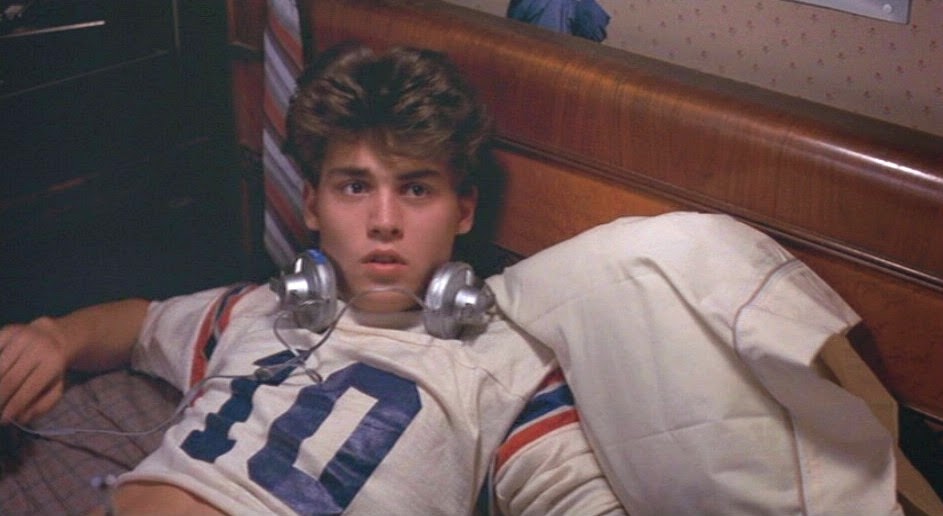 There’s not much more that can be said about Fred and his creepy kid murder-ey obsessions. So, I’ll just say this:

If you haven’t seen it yet and this is the reality, I may as well hack off my fingers and never write again. 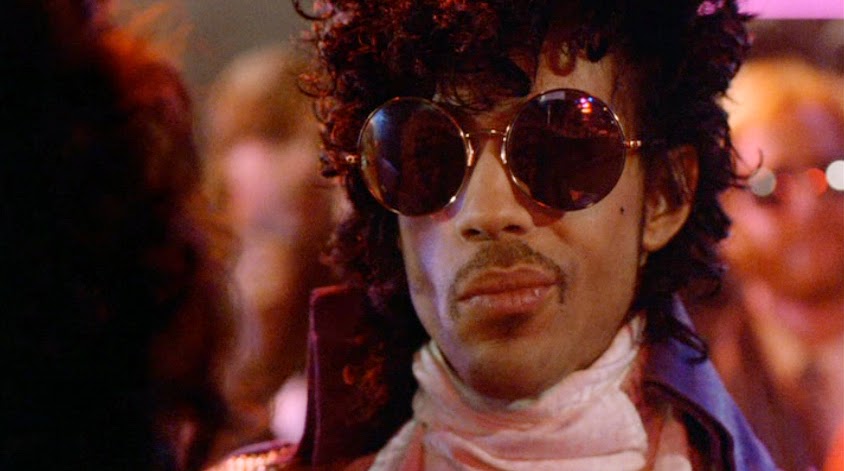 This musical drama is not only infamous in its musical wonders, but is also, just maybe, one of the greatest gifts Prince has ever given the general population.

Prince’s character, a musician simply called The Kid who happens to be on the up and up, meets a saucy lady singer called Apollonia. They fall in love, but to the kids dismay, he makes a series of poor decisions which ultimately causes him to lose it all. He must find who he is and all the while simultaneously rock the hell out.

Prince truly does act his tiny little pants off in the unforgettable Purple Rain. 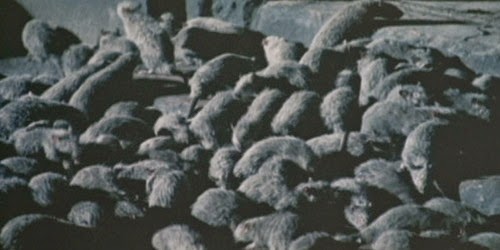 If you dig on these two, it’s absolutely worth the dough. This movie takes place after a nuclear war and has divided the society into two, those who live above ground and those who live below. Oh, and then a bunch of rats eat people. 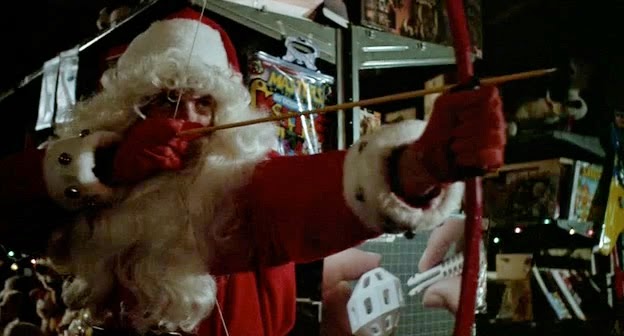 I like to pretend that this is the more likely version of what would’ve happened to Bruce Wayne. A small boy is left orphaned when his parents are murdered. He grows up to become an axe wielding man who, while working, is forced to dress up as Santa Claus. Then the costumed maniac kills the bejeez out of, well, pretty much everyone.

I’m kind of a Grinch, so I think this is a lovely holiday movie. 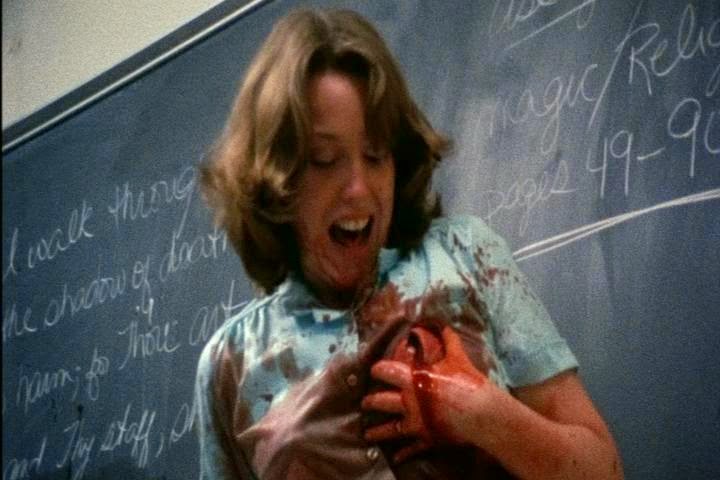 The plot is pretty predictable, but Splatter University is definitely a staple among high school gore horror.

After a teacher is killed, the students are left shaken. When the next semester rolls around, a new slew of murders falls upon the unfortunate school. Honestly, I’d probably choose to switch school districts after the first killing, but that’s just me.

Fun fact: when the man who had agreed to play the role of Father Perkins failed to show up on set, Haines himself assumed the position and acted the part. 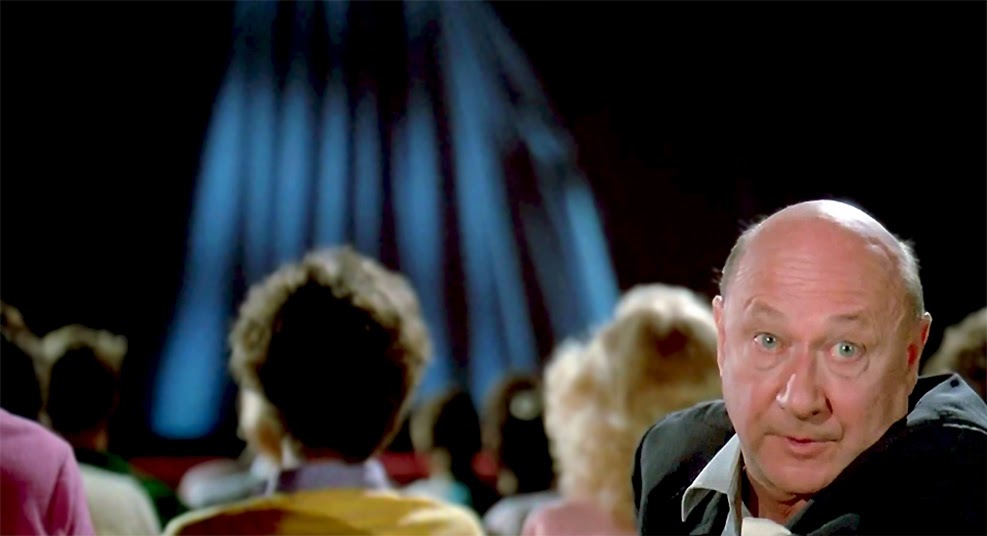 Terror in the Aisles is vastly different from the other films on this list.

Hosted by famed Donald Pleasence and the gorgeous Nancy Allen, it’s actually a compilation of trailers and portions of horror, crime, and sci-fi films spanning from the 1930s to the early 80s.

The film has dozens of clips and bits from movies like The Fly, Rosemary’s Baby, and Jaws to name a few. It’s non-stop fun and definitely a great movie to have on in the background for a Halloween party! 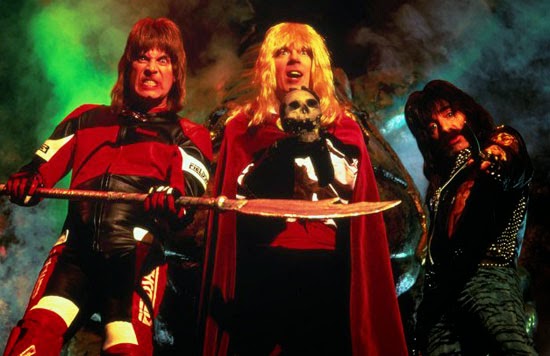 I first saw This is Spinal Tap when I was a preteen. Upon my initial viewing, I don’t even think I laughed once because it was just so different from anything I had ever seen before.

Then when I was about 17, I watched it again. I had just watched Hard Rock Zombies for the first time, so not only this time did I laugh my butt off, it made HRZ even funnier by comparison.

Now, I always mentally connect the two films and would absolutely recommend watching them back to back. 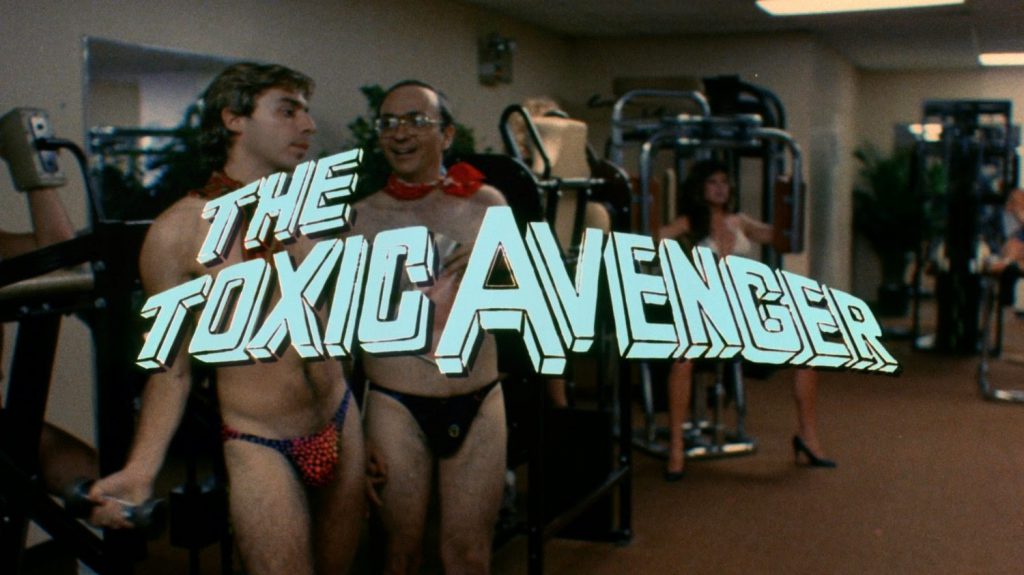 I’ve covered The Toxic Avenger in the past, but, hey, it never gets old. And I’ll fight you if you say otherwise.

A young janitor, Melvin, finds himself on the wrong end of a squabble at the Tromaville Health Club and falls into a vat of radioactive sludge. It’s this green slime that turns the janitor into The Toxic Avenger!

The anti-hero has grown into a media phenomenon, igniting Troma’s presence to epic proportions for what is essentially an loudly indie company. Toys, clothing, cosplay, and a hefty presence at horror conventions, Troma has come out ahead of the pack and has managed to stay there. For that, I know the horror community, myself included, commend them tremendously. It’s an odd feeling to be so heartfelt about boobs, goo, and gore, but that’s what Troma does. 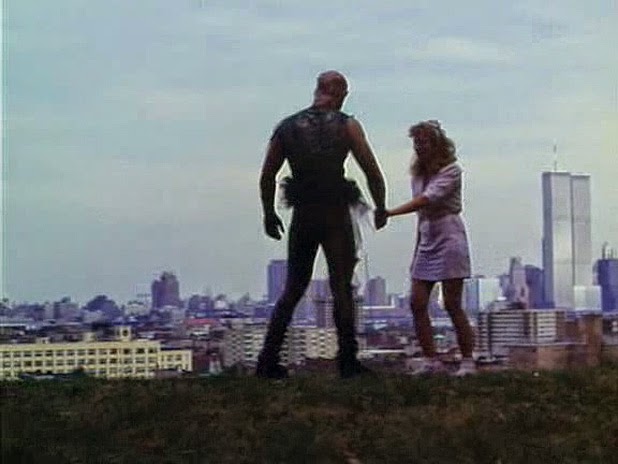 And, dammit, if they haven’t done an amazing job doing so.

So, it seems we have reached the end of the proverbial road.

We’ve consumed a fat slice of the pie that is 1984. Thirty movies that have all reached their thirtieth anniversaries that we continue to relish in. Whether they’re flops or still wildly popular to this day, every single one of these films has reached a colossal milestone and I’m happy to have been able to share some of that with you.