Last year, I provided you with 13 Songs To Play On Halloween, That Are Not THRILLER, which is all fine and good if you want to wait until this Friday. What are you to do in the waning hours until then?

I’m upping the length of my usual Halloween mix tape for you, in the interest that you’ll crank this baby up to 11 from now until midnight this All Hollows’ Eve.

You can play the songs below in your browser, or click here to launch your Spotify and be taken to it directly.

And by the way, feel free to creep out to this mix year-round.  After all, every day is Halloween. 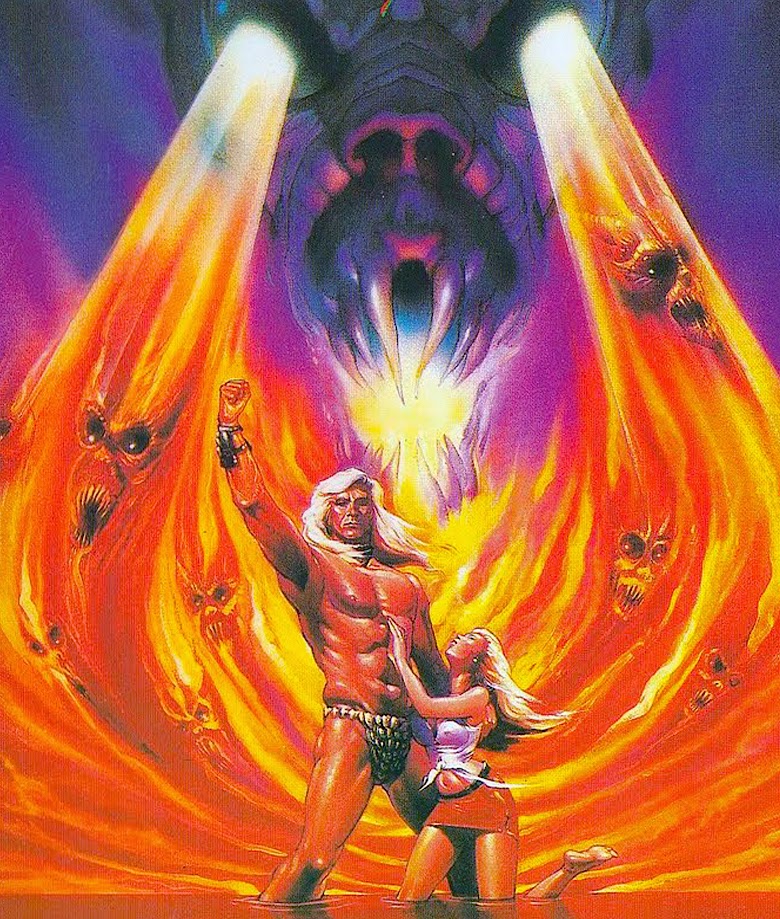 SONGS INCLUDE…
Bear In Heaven – Autumn

Bear in Heaven is one of my favorite modern rock bands these days, and their newest album starts with this part-pop, part-shoegaze number.  Any chorus containing the lines Oh autumn softly pounding in your chest, Oh autumn softly laying down to rest is an appropriate way to start a Halloween mix.

John Harrison composed two insanely classic synth-scores in the early 80s – Creepshow and Day of the Dead.  This is the main theme from the third in the Romero flesh-eater films, and if you don’t recognize it from the film’s soundtrack, you might recall its sampling in the debut album from Gorillaz.

Though it’s a song about the blood-lust of a werewolf, this great Eels howler was heard early into the series True Blood.  As toe-tapping and hard rocking as it is, it’s also demonically driven.  This one is a permanent fixture on my running mix as well, not that I’m a werewolf or anything.

Soho was an early 90s band that had a one-hit wonder with Hippychick (though their tunes appeared often on soundtracks to Hollywood films like Career Opportunities and even Scream.  This track is a moody, voodoo-inflicted reggae celebration of creepy.

Xavier Atencio wrote the lyrics to the tune Grim Grinning Ghosts that you hear throughout the greatest Horror attraction of all time, The Haunted Mansion.  Though its was Buddy Baker who wrote the music (which you’ll hear in this instrumental moment from the ride), Xavier can be heard in the attraction.  That’s his voice shouting “hey, lemme out of here,” from the coffin.

Bob Dylan’s tune was originally written for the film Midnight Cowboy, but it never made the cut.  Since its release, it’s been covered by countless bands, but I love this version performed only as Ministry could ever do.

The Presidents Of The United States Of America – Lump – Demo

Lump is one of those songs that instantly brings back your college days, or whatever you were doing in the early 90s, and not always in a good way.  This early demo version of the song is arguably better than the one that got so much airplay.  It’s slower, more broken, and fairly appropriate to the dark lyrics that placed it on this Halloween mix.

I stumbled upon the Horror themed LP “Halloween with the Ghouls” by The Ghouls a few years ago and I have absolutely no idea where it came from, nor whatever happened to the band.  Any insight to this gem of an odd-ball is welcome.

As heard in the first Scream, back when you could really rock out on your Horror soundtrack.  You’re All Dead!

This is one of the best acts to come out of Atlanta-based Horror music label Graveface Records.  Their vocals will haunt you long after you’ve made it to the next few tracks.

Fun Boy Three – The Lunatics (Have Taken Over the Asylum)

I’ve always thought Fun Boy Three was one of the more underrated bands of the 80s, at least in the United States (where nobody really listened to them).  Unclassifiable to just Pop or Ska, the band took risks with their blend of crazy lyrics and slightly off melodies.  This is one of the best.  I always picture the chorus being sung by stop-motion creatures a la Mad Monster Party.

Nine Inch Nails came back with a more haunted melodic sound than their previous efforts with their latest release.  I think it’s their most Pretty Hate Machine effort since that album put them on the map.
Alternately to this mix, Trent’s Gone Girl score makes a creepy background accompaniment for your trick ‘r’ treaters, by the way.

Sparks – I Married A Martian

The somewhat pervy, but always nerdy Sparks is always good for a laugh on any mix tape.  Their screeching I Married A Martian builds to a silly dance beat and gets its name from an even sillier Science Fiction classic from the Cold War.

Haley Bonar – From a Cage

Haley Bonar is a beautiful siren, and her latest album Last War contains this great folk/electronic lament.  You’ll probably fall in love with her.  Just a warning.

You can keep the Shower Sequence from Psycho.  My favorite Bernard Herrmann composition, outside of everything he created for Vertigo is this sad, dangerous theme that elevate the MacGuffin that drove Marion Crane to her death.

Bob Azzam was a popular bandleader who had a couple hits in France.  At the height of monster kitsch, he had the balls to put Dracula in Cha Cha heels.  Well done, sir.

When your Halloween party guests start shouting, “Yo, where my Gnossiennes at?!” here’s the one to play.  Satie’s #3 is the most Halloweeny of them all.

The Kac Ties – Mr. Were Wolf

The Doo-Wop group known as The Kac-Ties churned out this fun novelty tune as a B-Side to Let Your Love Light Shine.  It contains this great silver bullet of a refrain… So please Mr Werewolf dont eat me now, I dont have no blood anyhow.

Everyone reacts to the sadness and sometimes pure terror of Walt Disney’s Bambi, but it’s the music and sound design that are behind those emotions.  The cue Man Returns is the spookiest ever created for an animated film.

Only a Jive Turkey would dismiss this funky theme music from a Blacksploitation classic.

The Shadows – Man Of Mystery

A surf guitar take on the classic theme to the Edgar Wallace Mysteries British film series.

Picture a group of kids dressed as pirates dancing to this tune in a shag carpeted basement circa 1984.  Not that that memory comes from anywhere specific or anything.

Yes, this track is beneath Mott The Hoople lead Ian Hunter, but it comes from the soundtrack to Fright Night and can be heard during the fantastic nightclub sequence in which vampire Jerry seduces soon-to-be-lesbian Marcy D’Arcy.

This recent track is as infectious as the virus from 28 Days Later.  I have no idea who Jamie T is, or if any of his other tracks are good, but I’m including this Zombie song to make you cool with your kids.

Save me from myself croons lead singer Sade Sanchez on this fun first track on their dark debut EP.  Witchy-Poo greatness.

The only thing greater than this hooky track from Faith No More is its accompanying video, which I highly recommend you check out as well.  It’s an homage to Hitchcock’s Vertigo, with Jennifer Jason Leigh.

From the band’s third album, titled Third, would you believe the inspiration for this song was Steve Martin playing the ukulele in The Jerk?  True fact. Portishead is creepy enough without the gimmick of a ukulele tune, but somehow this track makes them all the more creepier.

I love, love, love the Dick Jacobs novelty album collecting 50s monster movie themes alongside ghoulish intros.  It’s one of my all time favorite things on Spotify.   This contains the main score for Tarantula, and it will take you right back to Creature Feature UHF of days gone by.

Oingo Boingo – When The Lights Go Out

To not include Oingo Boingo on a Halloween mix is criminal, and I don’t intend to end up on Lock Up: Halloween.  The band performed their last concert ever on Halloween, in fact.  When the Lights Go Out is a sort of B-Side remake of Dead Man’s Party, and really a better song in my opinion.

Peru was at the center of Latin American Rock music.  This track from the Peruvian band Pax plays on the cultural impact of the book and movie The Exorcist, minus the pea-soup vomit.

Guitarist john5 collaborated most recently with Horror celebrity Rob Zombie on the score for his film The Lords of Salem.  This is the “theme” of the film, which plays an integral part in the plot of the film.  This one’s good to keep on repeat if you really want to freak out your trick ‘r’ treaters.