You’ll see all the news this week about NYCC beating out SDCC this week in attendance, so it’s notable that I got my ass to the Con on a Yo! Bus for four days of bumping into fans, dizzying cosplay and one heck of a good time. For an early evening panel after spending my whole day traveling, the seats at the Javits Center welcomed us for one of my favorite publishers.

We took a look at the popular licensed properties held by IDW from the IDW & Hasbro: Transformers, Ponies & More panel at New York Comic Con, Day 1 – Thursday, October 9 2014 at 6:15pm. 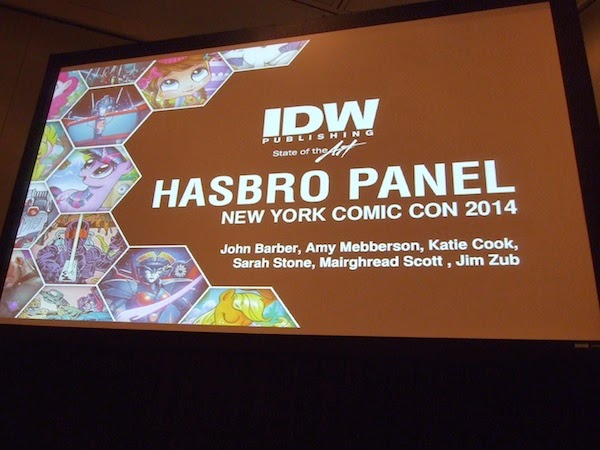 My only question is, why did my favorite book for life – G.I. Joe get relegated to peeling potato duty. I mean, “ & More”?

That’s a bit insulting to our nation’s Special Mission Force!

But Senior Editor John Barber and Mike Costa made up for it — by announcing Snake Eyes: Agent of Cobra, the next installment in the Cobra Files seasons.

Plus, some more “Truly Outrageous” announcements, nearly missed by the regular Friday through Sunday Con visitors! 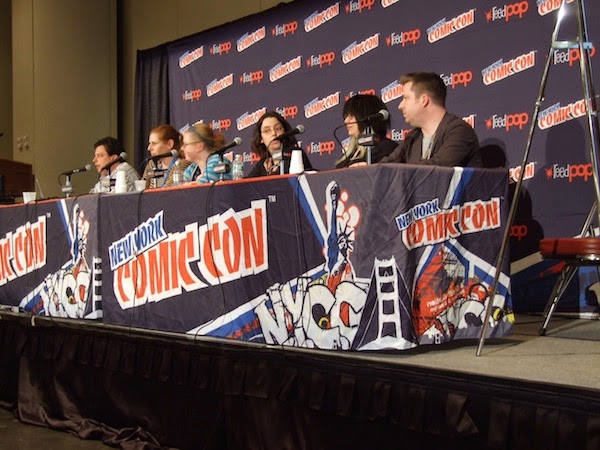 First up, Transformers news! Mairghread Scott and Barber follow up the mysterious origin of the Windblade mini with a new crossover, Combiner Wars. Transformers: Robots in Disguise drops the RID subtitle, but numbering stays consistent. A lot of tension has been building up on Cybertron, leading up to Combiner Wars. Windblade’s Sarah Stone, a newcomer to the robots, stays on art duties. Look for combiners like Constructicons next spring in the crossover. 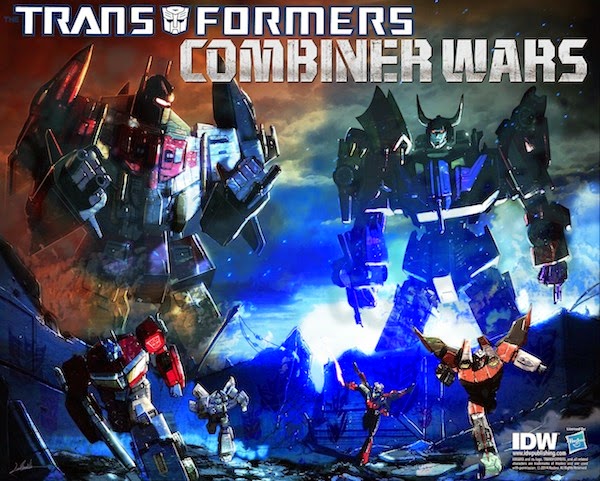 The trilogy including Tranformers: Primacy trilogy concludes, and James Roberts continues More Than Meets The Eye with art by Alex Milne. In November, Shane McCarthy and artist Guido Guidi reintroduce “The Transformers’ Wolverine” Drift in, Drift: Empire of Stone.

Perhaps the most bizarre combination of robots comes in the form of the upcoming Angry Birds/Transformers crossover! 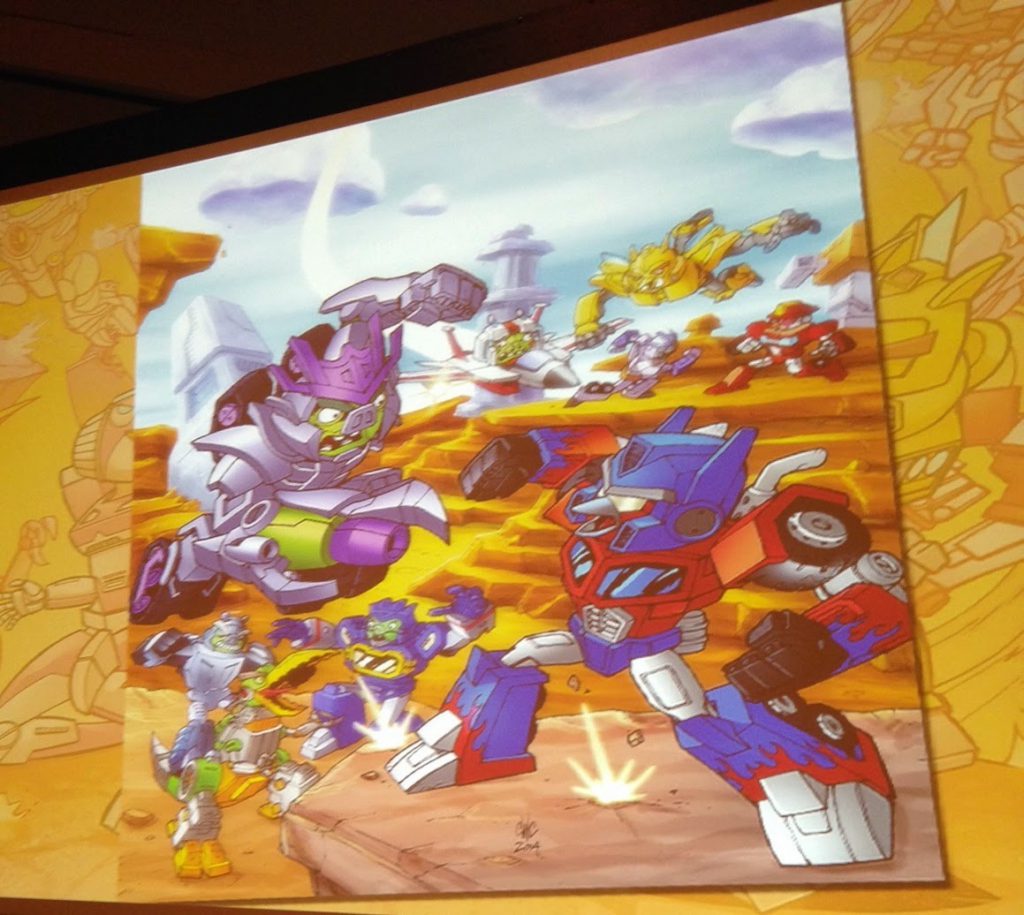 Barber joked that the birds vs. pigs will be ‘in canon and have an affect on the Combiner Wars’. While we hope that is true, we also hope for more sanctioned cosplay like the Robo-Birds found on the Con floor on Sunday. 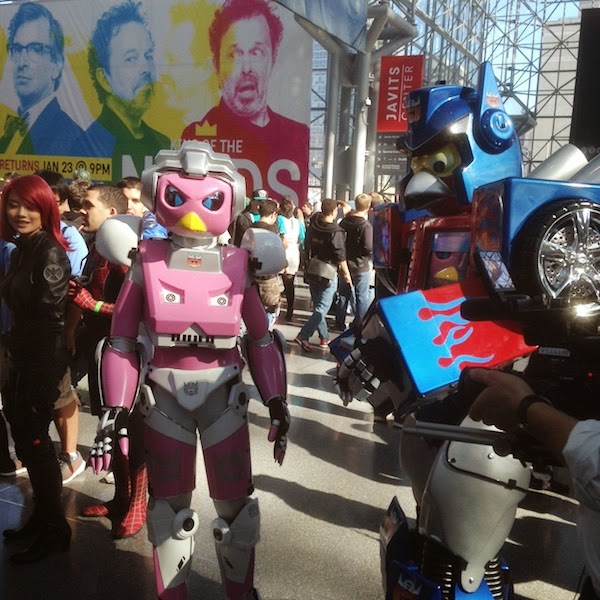 When approached on Twitter for a quote about the cosplay, IDW Managing Editor David Hedgecock gave me this.

Katie Cook (Star Wars, Gronk) was on hand with Amy Mebberson to reveal some My Little Pony news. MLP: Friends Forever #10 will team up Fluttershy with unlikely pal Iron Will, a minotaur. In fact, next year we will see the ponies and cows and male characters interacting a bit more.

Let’s keep combining toys until we make more super-toys! Tom Scioli (Gødland) and John Barber are responsible for flipping the previously titled G.I. Joe vs. the Transformers (Marvel and Devil’s Due) by having the Joes invade Cybertron, and infecting the place, like Tunnel Rats! The IDW book is called Transformers vs. G.I. Joe and Tom Scioli’s twisted psychotropic vision by way of Jack Kirby shows you a Hasbro-verse you never thought you’d see.

I’ll be so bold as to say this is the Tim and Eric: Awesome Show of Joe comics.

Including here from Tom’s Facebook wall, a new logo for Snake-Eyes. With a snake, a pair of eyes, and the Arashikage symbol!

Karen Traviss’ (Gears of War, Star Wars) relaunched the next regular season of G.I.Joe (Season 4) jumping 5 years past the previous series of both Joe and The Cobra Files. Cobra is a peace keeping organization, and the Joes are operating as special forces in a world of drones and hyper secrecy. It is the first female to write the series, and the ladies are going to take more of an active role leading the team. Traviss brings a serious and meticulous tone to the book, honoring the procedural military tradition set by Larry Hama.

Speaking of the master, Larry Hama’s G.I. Joe: A Real American Hero continues to roll on, in the 1980’s Marvel continuity. Recent losses are having an affect on both sides, and soon we will see Budo, popular Samurai gracing the cover of G.I.Joe #208. Art and covers by S.L. Gallant continue to impress — and if you get to the store early enough, you can score a Hama Retailer Incentive (RI) cover of each issue.

The biggest Joe news is, after nearly a year, Cobra Files returns. Mike Costa’s 24-style Joe book had many repercussions. Starting with a Crimson Twin death, the death of Cobra Commander, and the disbanding of the team, there was a lot of meaty Joe action in those volumes. RIP Chuckles!

Another person conspicuously missing from the roster for two years has been The Joe’s Wolverine — Snake Eyes! I mean come on, did you really think he was dead? Costa took a ridiculous pitch and made it work. Artist Paolo Villanelli takes on telling the tale of Snake-Eyes breaking Destro out of prison and pitting the ninja against his former team mates.

When the last Cobra Files title was competing against G.I.Joe in the marketplace, sales suffered. 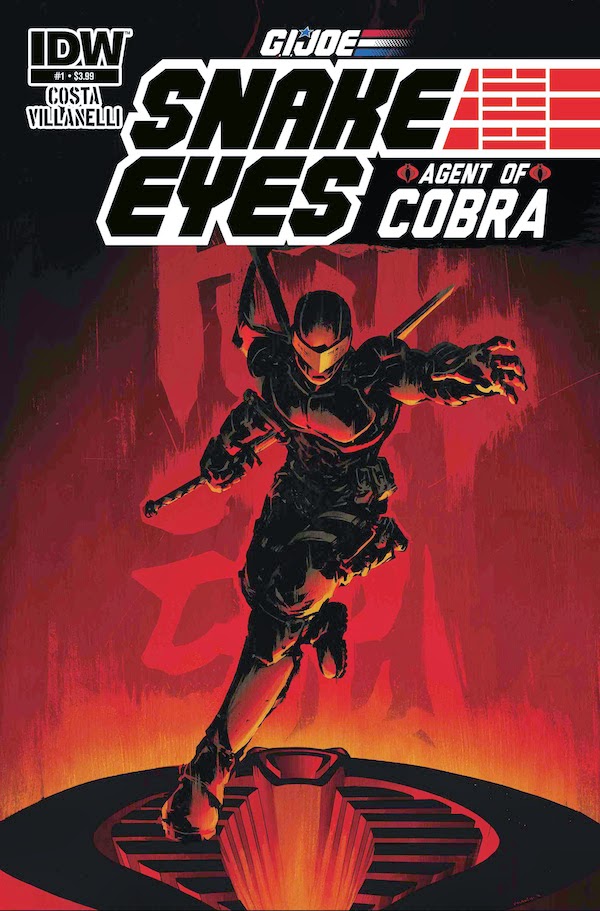 Costa admits, hilariously that he thinks that people will buy Snake-Eyes: Agent of Cobra based on the title, and this is based on “100% a crass, consumer decision” But then I thought, this makes sense, we don’t know what Snake-Eyes has been doing for the past two years. I don’t think people though he was dead — if you did, sorry, he’s alive! Or is he and it’s someone else masquerading as Snake-Eyes. No one knows what he looks or sounds like, so it could kinda be anybody.”

“It’s a really big action movie, the kind of Joe comic I’ve always wanted to write”, said Costa, who came from the audience when the art was revealed for the new series. “(this has) the horrible trauma and PTSD inducing tragedy that all my readers have come to love”!

After the panel, Costa presumably met his artist Paolo for the first time in person, emblematic of the way comics are made these days, and a rather fun moment to reveal at the panel!

Jim Zub (Skullkickers, Samurai Jack) was on hand to talk about his favorite game and biggest influence on Skullkickers, Dungeons & Dragons. Premiering today, Zub’s Legends of Baldur’s Gate exists in the D&D realm. 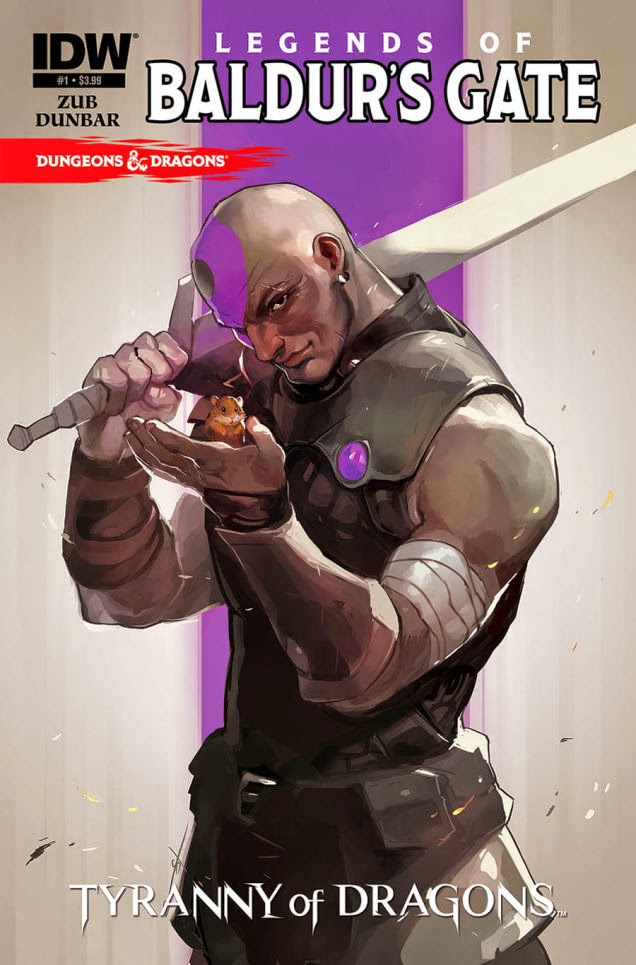 You may remember Baldur’s Gate as a video game. Look for another fun adventure book in this one from Zub. Boo, the miniature giant space hamster from screams “Go for the Eyes” on the NYCC preview exclusive cover.

Last, and certainly not least, Barber revealed a purple teaser for a comic coming out next year. IDW has secured the Jem and The Holograms. 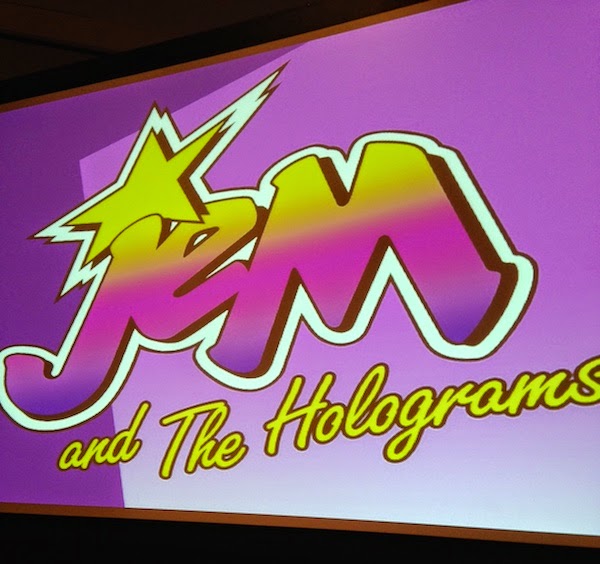 The previously confused and perhaps irritated moms and a few other screaming voices took to freaking out at this announcement. While this wasn’t intended for me, (much of the panel was), I couldn’t help but ‘squee’ a bit about this myself at announcement time.

With other great properties I enjoyed as a kid being treated so well at IDW, seeing this one gave me a generous feeling. As if I had something to do with it (I didn’t) I looked around and said, “Yes, please have this Jem as my gift to you, for I have eaten too much of this Hasbro cake and now they are wheeling out another! Please get outrageous for me. I’m sitting this one out, please enjoy the spoils”!

The creative team and exact date is not announced, but some childhood memories are coming back for some and a new audience will be in for a treat!

In all, it is great to get in on a panel early in the con. Lines were cut off and at capacity for nearly every other NYCC panel this weekend.

Myself, really. I should know better and brought a folding chair for the lines, but hey I still had a blast and left with many more t-shirts than I walked in with.

Until Snake-Eyes joins the Decepticons (wait, maybe he will!), make mine IDW.