“Hello, Wilbur!” The world’s most famous talking horse returns when Shout! Factory releases Mister Ed: The Complete Series in a 22-DVD box set on December 9, 2014. The set presents all Season 1 episodes in their original full-length for the first time, and presents Season 6 on DVD for the first time, along with a slate of several bonus features.

Customers ordering from ShoutFactory.com will get free U.S. standard shipping and will receive their copies one month early.

Architect Wilbur Post (Alan Young, Duck Tales) and his wife Carol (Connie Hines) have settled into a beautiful new home, complete with a barn in the backyard…and a very unique tenant. Wilbur finds that the former owner has left his horse behind. He soon discovers that this is no ordinary horse, as the eloquent Mr. Ed can talk, but only to Wilbur! The anxious architect and the pontificating palomino soon become the best of friends, leading to all sorts of comedic misadventures.

Winner of the 1963 Golden Globe Award for Best Television Series (Comedy), Mister Ed is undoubtedly one of the most memorable sitcoms of its era. From its kooky premise to its devilishly catchy theme song, it has endured as a true television classic. Mister Ed: The Complete Series presents all six seasons and 143 episodes of the beloved show, which remains as hilarious and socially relevant today as it did in its original airing.

An essential part of your classic television collection? Of course, of course! 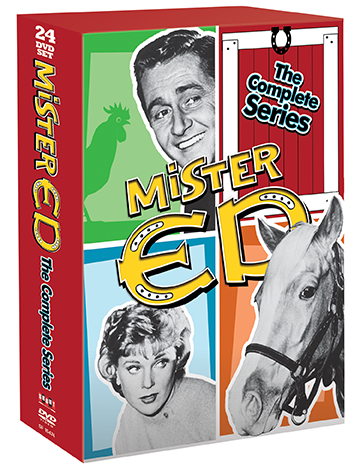