When was the last time you read a good cannibal story set behind the Red Curtain?

Look no further than this new webcomic from Steve Ekstrom, Cannibal Island.

FOG!: Thanks for joining us today! Why are you inspired to do a webcomic based on the Nazino affair, and for the readers, just what is that? 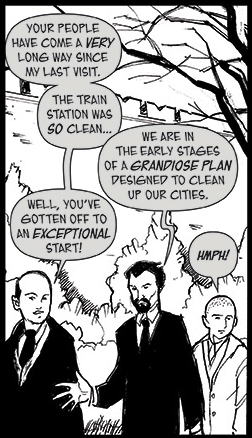 Steve Ekstrom: The “Nazino affair” was an unfortunate set of circumstances that occurred during early 1930’s in the Soviet Union where Stalin and friends came up with something called the “grandiose plan” where various “undesirables” (vagrants, prisoners, people who left their passports at home on accident, affluent land-owners from rural areas, political activists) were all taken to the undeveloped eastern areas of Russia and placed into “Labor Villages” and basically told “build yourself some shelter and start cultivating this land…or die.”

Around 4000 “undesirables” were being sent to an area of Russia known as Tomsk and the local officials, when they learned how many criminals were mixed into their body of 4000 laborers, they panicked and decided to move their Labor Village to the island of Nazino which just happened to be about 2 miles long and half a mile wide.

Because rations and resources were stretched to their absolute maximum through poorly planned efficiency, the Labor Village on Nazino was only given about 20 Tons of flour dumped right on the shore of the island, right out in the open.

Before the prisoners ever arrived, people were dying of exposure and starvation.

The criminally minded laborers began to form loose gangs. Within weeks of arriving, numerous reports of cannibalism had already been reported.

So the cannibalism is very real – in fact based on real events?

Cannibalism was already occurring in the outlying regions of the Soviet Union because of widespread famine and ecological issues of the time that were similar to what happened in the U.S. with the whole “Dust Bowl” famine. Couple that with the fact that the Communist government was seizing every bit of grain and/ or viable crop for the formation of rations for their labor camps and to feed their growing army and there you have it.

How do your American heroes end up on the island?

Two of the U.S. Ambassador’s delegation, Sergeant Major Walter Rohr, head of the security detail for the U.S. embassy and a translator, Reed Walton, decide to attempt to infiltrate the Labor Camp System after watching thousands of people being purged in the streets of Moscow.

It just so happens that when they are processed, they tragically end up on Nazino with the worst batch of “Special Laborers”.

What made you decide on the webcomic format for this particular story versus a traditional book?

Who is to say that I won’t compile these pages into a book format? (laughing)

In all seriousness, the growth of the webcomic community coupled with the difficulty of procuring funds for publishing costs make this sort of endeavor a no-brainer.

Young publishers should take advantage of cheap domain names, ComicPress (a sub-format of WordPress) is free if you choose not to donate anything to the folks who created it.

I’m in the industry because I love comics. I’m passionate about the medium as an art form. I went to school to be a writer. So I’m writing comics and I’m producing them myself on my terms with a fantastic collaborative partner. I call the shots. I tell the story I want to tell. If you’re serious about wanting to make comics, publishing online is a great first step to take to getting to the ultimate goal of publishing comics.

What is appealing about going back to Soviet Russian history to tell the story of desperate times?

Well, we may not be living under the rule of a Communist Regime…but the economic disparity in this country continues to carve a wider and wider gap between the ultra-wealthy and the rising number of poor Americans as the middle class dwindles in size.

We live in a world where starvation is still rampant and yet portable, easily procured food is something we take for granted in this country.

Try to imagine if our conditions became so poor that you didn’t even get to eat once a day.

Now imagine not being able to eat once a day and being put on an island without shelter or proper food and told to fend for yourself or die.

The vagrants sent to the island — what do you think they had in common? Were they all criminals? Were they all so desperate to escape? Reminds me of a dark version of The Prisoner.

Actually, a harrowing fact about the overcrowded Russian prison system (or Gulag) during this time period was that a large number of the prisoners were under the age of 18. Children who were caught stealing food were imprisoned all the time.

They weren’t necessarily hardened criminals…but I’m sure, over time, that a lot of these kids who spent enough time in the Gulag eventually became pretty warped and nefarious.  I don’t want to reveal a great deal just yet–but one of the inhabitants of the island is going to be a pudgy teenage gang lord who steals the gold fillings out of the sickly workers mouths on the island. He’s going to be a creepy little bastard, for sure.

As for the ones who were desperate to escape…there was a standing order to shoot people who tried to swim into the river to leave the island. In fact, that’s another plot point that becomes a pretty twisted moment in the story. You’ll just have to wait and see. There isn’t a LOT of info out there in the public eye regarding what happened on Nazino…so I want to relay some of that info in fictional recreations based on the reported data by French Historian Nicolas Werth. 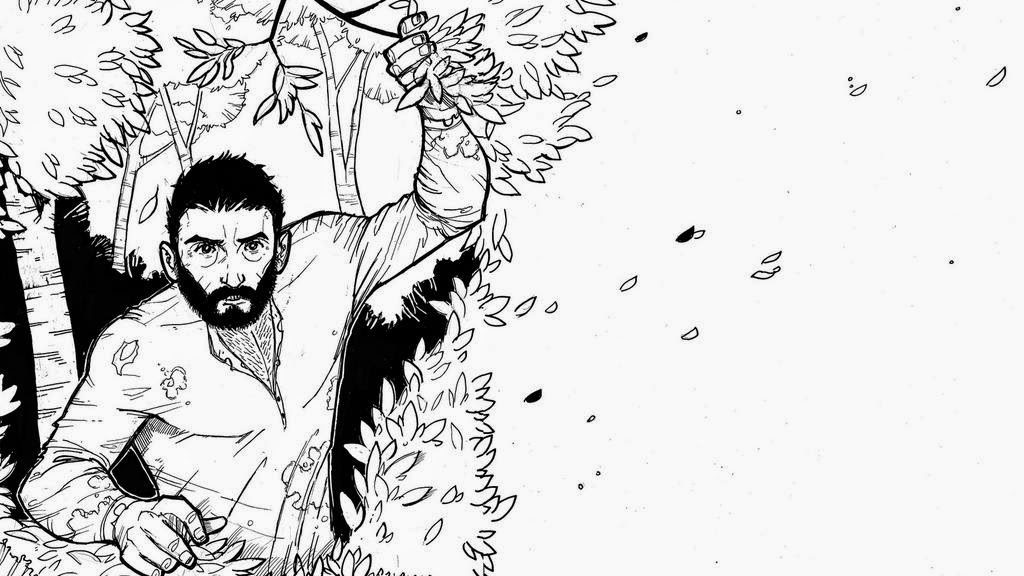 Did your research yield any interesting facts about cannibalism, or cannibalism in Soviet states?

Quite a bit. I even found a really creepy “zombie” conspiracy theory website that linked to Google Maps and showed that there are satellite “dead spots” over areas of Russia to this day that may contain extremely rural villages where acts of cannibalism still occur.  Truth be told, finding that website several years ago was the first step I took into researching the Nazino affair. Nazino was a HUGE secret of the Soviet Union that wasn’t unearthed until the fall of Communism in the late 1980’s through the early 1990’s. Stalin had the whole thing buried.

How often will the story be published?

To launch the site, we went ahead and published the first four pages. On Friday, we’re going to throw up another three pages to give readers an incentive to come back and check us out. We’re going to take a break for about a week and a half to promote the book and to get ahead of schedule with pages and then we’re going to publish two pages every Wednesday…with a possible “treat” of extra pages on Halloween. (hint-hint)

Once we finish up the first Chapter/ Issue, we’ll be on a short 2-3 week break to regroup and prep the next Chapter/ Issue. There will be a total of six chapters. once we’re finished, if we’ve built up a decent sized audience, we’ll begin the process of collecting the entire project for print and we’ll Kickstart colored bookshelf format of the book.

How did you come across your artist, Dionysios?

We have a pretty unique story, actually. Dionysios and I were kind of set-up on a “blind date”. I was rummaging around the action figure aisle of the local Target when I struck up a conversation with another adult toy collector. I mentioned that I was working in the comic book industry and he told me about his friend who had gone to school to be a comic book artist.

I was given a phone number to call. Dionysios and I eventually had lunch and looked over each others’ portfolios and decided we wanted to work on something together but our schedules just didn’t work out so we kind of just drifted apart for a while.

I was hanging out with another comic book artist, Larry Watts, and he had wanted to get all the comic book people who were local to the Gainesville area together to just have some beer and talk about their work and what not. Dionysios was the first guy that popped into my head–so I had him come over and hang out.  Larry looked over his portfolio and encouraged him to work on Cannibal Island with me.  That was about 6 weeks ago…