For the majority of the American populous, December is the most nostalgic time of year. Presents, fresh glistening snow, kissing on New Years Eve. Que c’est beau!

As for myself and my spookier brethren, our most cherished and memory laden time of year is, hands down, the month of October. 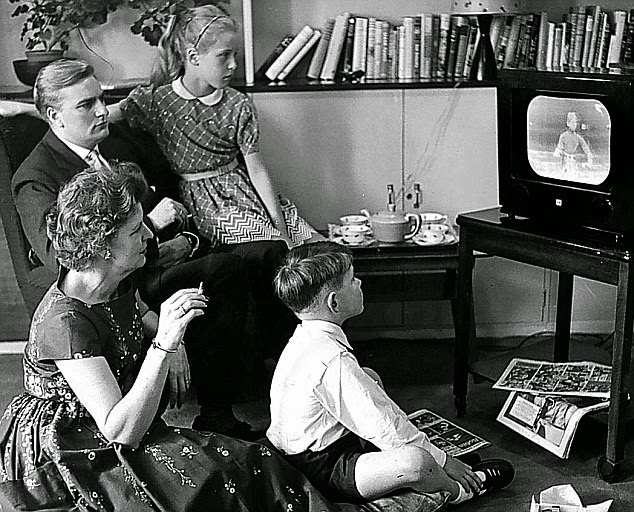 31 days of scary movies, dressing up, eating a copious amount of candy and celebrating all that’s uncanny, weird, and, sometimes scary. We get 1/12 of the year and, by golly, we’re going to live it up. It’s also the only time where you can actually expect to see the entirety of the Halloween franchise in order on television. It’s the little things in life.

But, really, there’s something exciting about the colors changing and celebrating the darker part of the year.

I had the privilege of growing up in the early 1990s. Sorry to every human older than me, as I know this tends to make people feel uncomfortable. I’m not totally sure why, I just know to apologize in advance. Regardless, I grew up in a time when houses were still saleable, car phones were a thing, and no one was hotter than Kelly Kapowski.

Not only were the 90s an overall enjoyable time, comparatively to the last 14 years, they also had some pretty rad TV shows for the youngins. You didn’t have to watch the wimpy, fluffy drivel that’s shoveled onto televisions everywhere now. There were options. Oh, yes. And some of those options were freaky and frightening with just a twist of humor.

And surprise! I now am an adult woman who loves horror and humor. I want to celebrate this October by showcasing 90s kids show.

Some are frightening, some are funny.

And the best ones are both. 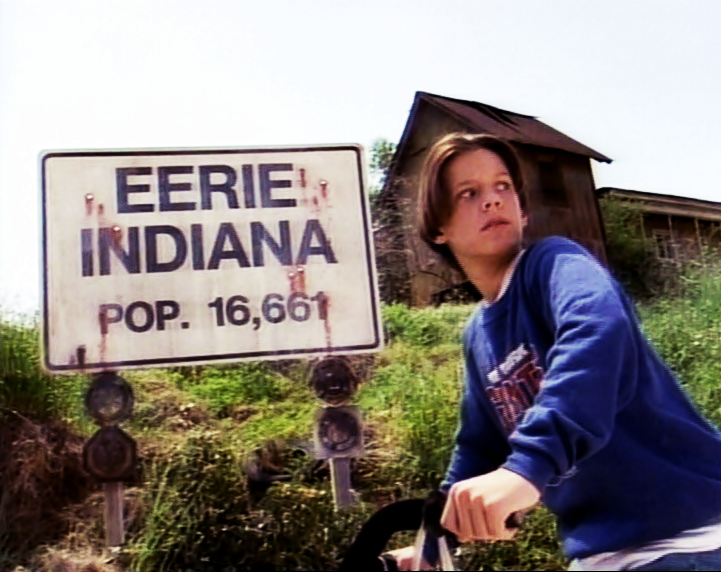 Although there are only 19 episodes in the entire series, they reran the hell out of this kitschy, funny show. Eerie, Indiana is centered around Marshall Teller (Omri Katz), a new kid who seems to be the only one aware of how odd Eerie is. Omri Katz, best known for playing Max Dennison in Hocus Pocus, could do no wrong in the 90s. I honestly don’t know one girl who didn’t think he was dreamy back then. Marshall befriends a sweet kid, Simon Holmes (Justin Shenkarow), who may be the last remaining normal kid left in town. Together, they debunk, harass, and investigate all things oogy and unusual.

Joe Dante directed a handful of episodes, so it’s no wonder this show hit the nail on the head in a great way. In Eerie, Indiana’s short life, Marshall and Simon come face to face with odd disappearances, brainwashing, ray guns, and, of course, Elvis, to name a few. My favorite episode is “Reality Takes a Holiday” where it gets all kinds of meta real quick. All of the actors, Marshall’s family included, are aware it’s a television show and Omri’s character really believes he’s Marshall. Super clever and pretty adventurous, too.

Eerie, Indiana first ran on NBC, and then on Disney when it syndicated. Guest appearances on the show include, but aren’t limited to, Danielle Harris, Tobey Maguire, and Matt Frewer. If you haven’t watched it in a while, take a trip down memory lane and revisit Eerie, Indiana. 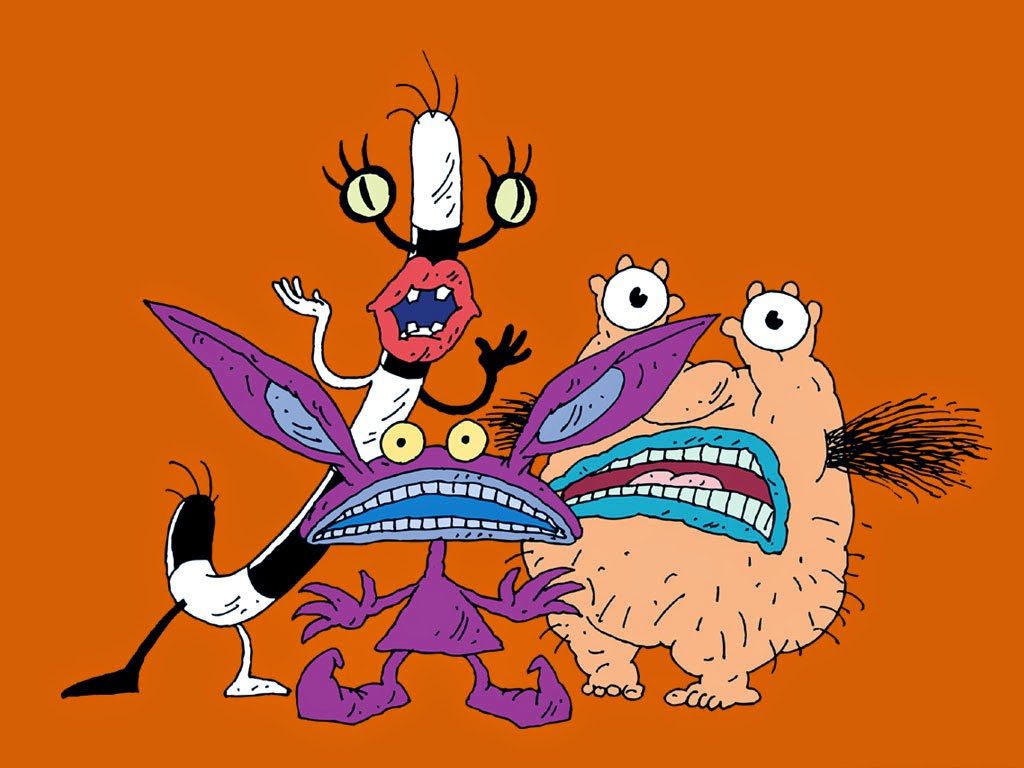 Aah! Real Monsters is quintessential horror for kids. Ickis, Oblina and Krumm are three students at a monster school underneath the city. The schools homework assignments are for the monster undergrads scare children. They contort themselves, scream, and hide in closets to terrify both kids and grown ups.

I remember a friend of mine told me something I’d never forget. He said, “You know, it’s weird to think about how kids shows are made because they’re made by adults.” And, in this particular instance, you can tell the people who made Aah! Real Monsters loved the macabre and having fun.

Aah! Real Monsters aired from late 1994 until late 1997. With a total of 54 episodes, Aah! Real Monsters dominated the airwaves alongside shows like Rocko’s Modern Life and Doug on Nickelodeon. Both Xander Berkeley and Tim Curry lent their voices to the show. Even as a kid I knew how freaking cool that was.

I also had the Aah! Real Monsters video game on Sega Genesis. I played that thing until the cartridge actually cracked in half. Oh my god, I miss Sega.

R.L. Stine’s Goosebumps has sold over 350 million books since they first came out in 1992. I started reading roughly before I turned 3, so I was all over those delicious smelling paperbacks. When I couldn’t sleep at night, my mom would read me Say Cheese and Die!, Welcome to Dead House, or Night of the Living Dummy. I even named my first fish, Killer, after the dog in The Barking Ghost.

Clearly, we weren’t going to get a dog. Exhibit A and B that I was weird from the get go. Needless to say, I was more than excited when they announced Goosebumps was going to be made into a television show. I remember when the series premiered on March 3, 1997. They began the series with an episode titled The Haunted Mask.  I was so into it. I sat in my parents bedroom (that’s where the only TV was) and watched, captivated. I was hooked. The practical effects were actually really good and I was all about watching my favorite books come to life.

Fun fact: After the episode ended, I grabbed the remote control and hit the “up” button on accident. On this channel was some show I had never seen before. Two brothers were playing in a pool at night. A man approaches them and it’s revealed he’s some sort of sideshow performer, an “Alligator Man.” Then once the “Alligator Man” is alone, another figure appears, attacks and kills him. Aghast, I immediately switched the TV off and ran to bed.

It wasn’t until 15 years later that I realized this was the Humbug episode from The X-Files. I’m sure you could imagine my feeling of revelation at the time.

Goosebumps ran for four season with a total of 74 episodes. Many stars have passed through the Goosebumps rite of passage. Hayden Christensen, Katherine Isabelle, and Ryan Gosling all paid their dues on this predominately Canadian made television show. Oh, and freaking Adam West made an appearance, too. How could you not love Goosebumps?

Are You Afraid of the Dark 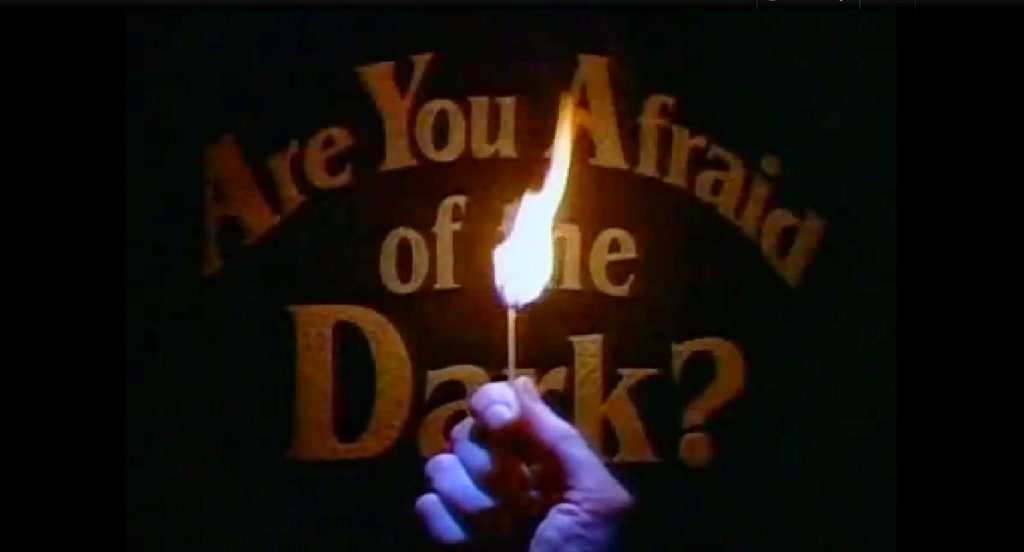 Are You Afraid of the Dark? ran for ten years, people. They packed 91 episodes into seven seasons.

During October of 1990, AYAOTD began its reign of freaking kids out in Canada. Then in 1992, AYAOTD aired on SNICK. Oh, god, doesn’t the word SNICK make you feel all gooey inside? Now, I’ve seen a lot of AYAOTD in my time. So much so that I’ve actually developed an Are You Afraid of the Dark? formula theorem. Here goes.

Then it tends to go one of two ways.

*In some cases, both Character A and B may see the happening and it’s the working parent(s) who likely will not see/hear event.

Like I said, I watched a lot of Are You Afraid of the Dark? as a kid. And also perhaps as a grown ass woman. But, that’s none of your business, dammit.