Mark Waid’s Insufferable is headed into Volume 3 this week and he joins us to tell us what to expect from this father/son super hero team-up book that continues to push the envelope of genre and format.

Back in May we talked with Mark about his app and subscription model, and today we check in on to see what is working for Thrillbent Comics and the challenges writing digital comic strips for the app that the creators face.

In terms of story, Volume 3 or The Complete 3rd Season, has the insufferable Galahad and his father Nocturnus clicking on all cylinders as they go after their publicist’s Meg’s abductors. Will they be in sync for long, or will Nocturnus strangle his fool kid’s arrogant neck?

Mark gives us some insight!

FOG!: I’ve been reading Insufferable from the beginning, I really dig it. Would you consider Incorruptible, Irredeemable and Insufferable to be trilogy, or is this a separate world?

Mark Waid: Because of the way the continuity works and Insufferable needs to be in a world that hasn’t been ravished by The Plutonian, it’s not exactly the same continuity, but then again we’ve never put a timeframe on stuff. I guess there is always the possibility that Insufferable could lead into Incorruptible and Irredeemable somewhere down the road.

When we talked about Thrillbent, we talked about the format and I was wondering if Peter Krause and Nolan Woodard are adapting to the format of your scripts and how that is working out for you as far as writing for the digital format?

It’s funny, it is going great — there is always an experiment. We are always coming up with new ways of describing what we are doing to each other and I know it sounds weird but you have to reinvent the entire language of how you write scripts. You are no longer talking about page turns or necessarily individual panels.

Especially with digital, I think it is even more important to surrender even more of control of the pacing and choreography to the artist. Because they have a more visual sense and you get a lot better results when they have more say about how the digital flow of how everything works. 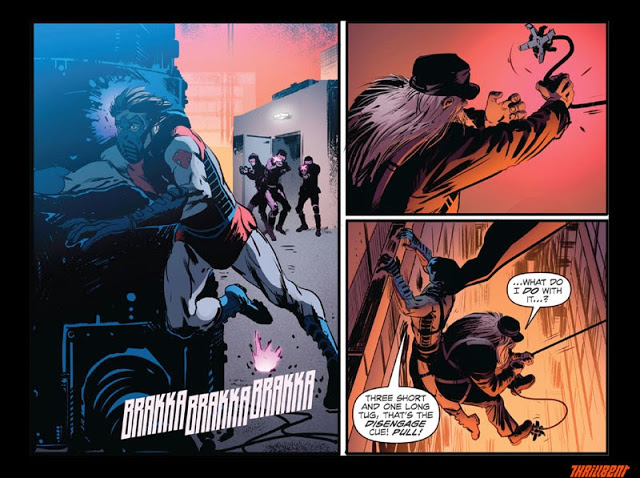 One of the things that I do enjoy on your book and the other Thrillbent books are a sense of a quasi-animation, as you reveal the layers of people talking and word balloons. That paces the dialogue for you with balloon placement and layers. I can appreciate there is more to what you have to do to get that done.

The way you stack panels, overlapping dialogue, and creating the pacing that is different than what you do for print. It’s a thrill. No pun intended!

That’s part of the job, finding new ways of doing that stuff.

People can get caught up on Insufferable on the Thrillbent app, or Vol. 1 on ComiXology. 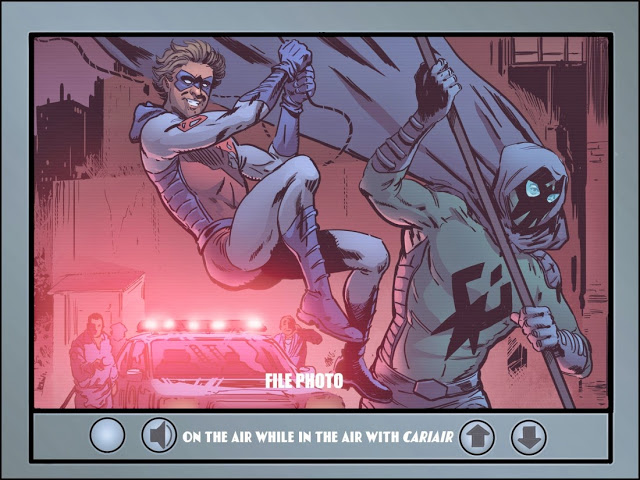 Where are we at in the story at Volume 3?

For those just joining us, Insufferable is the story of what happens when you are a crimefighter and your kid sidekick turns out to be a jerk. That’s the series in a nutshell.

What we’ve been dealing with in Volumes 1 & 2 is the relationship between Nocturnus — the older, veteran crimefighter in the city, and his former sidekick, his son — Galahad — who has become a raging egomaniac and a celebrity spokesman and a millionaire. He’s still a crimefighter, he’s one of the best crimefighters in the world — just ask him! 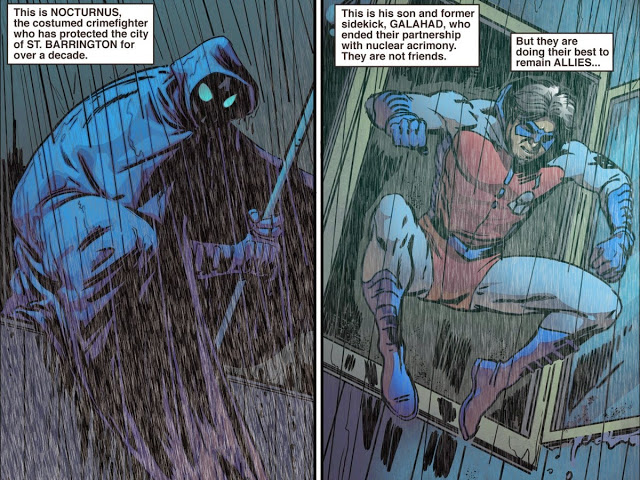 Their relationship is such that they can’t stand to be around each other. So, Insufferable is the ongoing story of the kind of adventures that throw them together whether they want to be together or not!

The things that really take the two of them to have to team up and solve, even though the constant threat over their heads is what is going to get them first, the villains that they are up against or are they going to kill each other first?

As you said, they are both seasoned and great crime fighters and good at what they do, what’s funny is that they are family, so they want to strangle each other ALL of the time.  There is a moment in the preview for Vol. 3 where they are really clicking as a team. They are really working, at least they start out on one task, for the greater good, are going to rescue Meg and save St. Barrington…

…I sure hope you enjoy that, because it doesn’t last!

That’s the thing about forced relationships, they never end well. This is going to be no exception.

They seem to be clicking together pretty well in that first chapter—but trust me—there is no drama if that lasted any length of time. They will be at each other’s throats by Chapter 5.

You mentioned that in Volume 2 — when Meg points out a scenario she’s seen a million times, “When Dad hits Kid”.

Meg’s a cool character, she’s the support, their publicist. She’s not an Oracle or Felicity kind of support, she will raise money for the guys to get them back home when they are abroad for example.   But, now she’s gone, so is Meg going to be OK?

Well, that’s part of the suspense! I hope so because she is one of the few things that keeps them from killing each other.

That’s a real question, what role does she serve in this at this point?

She is continuing to be frustrated by both of them. There has to be a point where she throws up her hands and just says “I’m outta here”!

But — the question is — will she live long enough to do that? 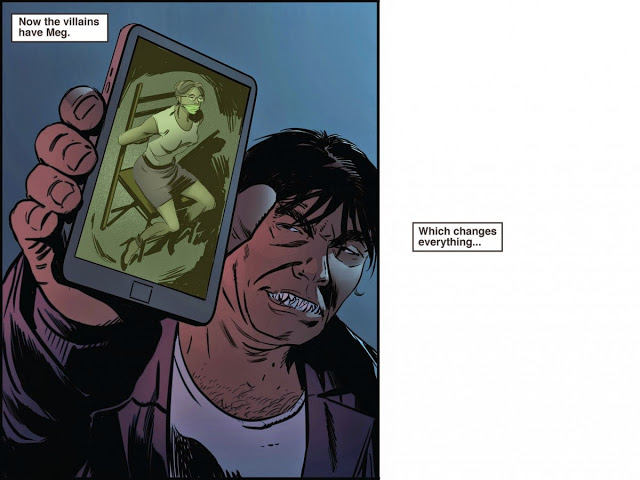 There is some really funny stuff in Volume 2. Volume 2 read — and I mean this in the highest compliment — read like an episode of Columbo. They are away from their city and still stuff goes wrong but the Scooby team is headed back to figure this out.

I take that as the highest of compliments, by the way.

That is the fun of writing the series is that it is very serious in it’s way, and there is a lot of drama too it, obviously. At the same time it is no fun if there is not some comedy there. Watching the two of them rail at each other.

Any time I want to find some voice for Galahad and his pomposity, all I need to do is look at Kanye West’s twitter feed or go read some blogpost by Mark Millar and I’ve got my voice. 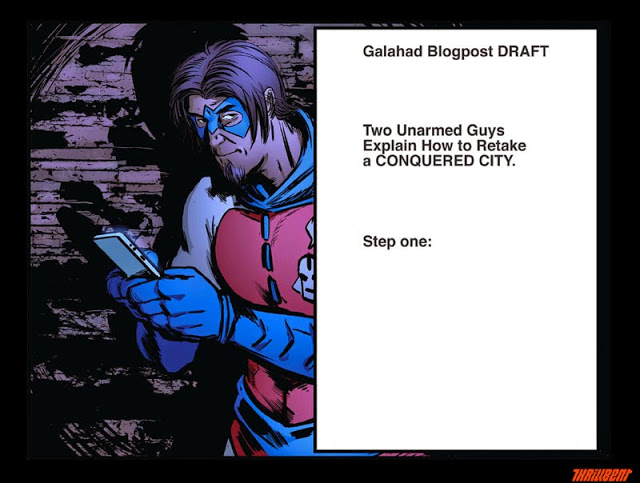 It seems like Volume 3 is taking some cues from Hollywood, even. The city is locked down, there is going to be a more super hero-based story, at least so far. And we have an interesting villain in Razorjaw. Are there any other cool villains coming our way?

Actually, on the other side of the power behind the threat here is something even darker. More than that I cannot say.

The best way for people to get caught up is to get the Thrillbent app, and you can’t even beat a $3.99/month price point to get all of the Thrillbent action and Insufferable.

Exactly, we have 50 some-odd chapters of Insufferable up already and that is in addition to the work I’ve done with Barry Kiston on Empire, in addition to literally the hundreds of other comics up on the site. For that $3.99 subscription, you can stream all of that stuff and binge until your heart is content. 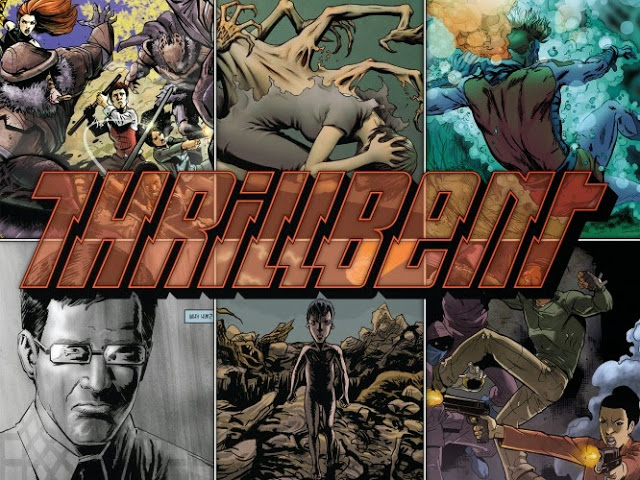 It is all you can eat, and just like I will stay up all night watching a Netflix series, I will find myself staying up all night on the app, I have to thank you for that.  I am glad it is working out for you guys, it is a different model.

Thank you, it is a different model, and I’ll be honest with you, the hard part is reminding people that we are out there. The hard part is that we are doing our own marketing. We’ve got great people helping us with this stuff, but the more traffic we can drive our way, the more successful we are. 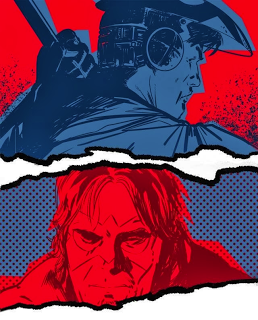