THE BUBBLE is the “eerie and enjoyable” (Los Angeles Times) science-fiction spine-tingler that sicked audiences and revolutionized the cinematic world of 3-D! The eye-popping thrills and chills begin when a plane carrying pregnant Catherine (Deborah Walley) and her husband Mark (Michael Cole) is forced to land in a mysterious remote town. The townspeople are quite strange, indeed: they repeat certain phrases and movements ceaselessly and stagger through the streets like brain-dead automatons. Then there is an even more terrifying discovery — the zombie inhabitants live under an impenetrable dome, trapped like insects in a jar. Can Catherine, Mark and their newborn baby escape or will they become mindless drones trapped in a human zoo?

THE BUBBLE introduced the groundbreaking Space-Vision 3-D system, which pioneered a new way of both shooting and exhibiting 3-D film. These single-strip 35mm stereoscopic techniques were used in almost all major 3-D features for the next 30 years, making THE BUBBLE not only an “amazing” (Hollywood Reporter) sci-fi thriller, but also an important milestone in the history of cinema. Now fully restored from the 35mm negatives by the 3-D Film Archive.

Originally released in 1966, THE BUBBLE was a milestone in the history of 3-D filmmaking, being the first production shot in the Space-Vision 3-D system, an innovative new process that revolutionized the way 3-D movies would be made for the next 30 years. 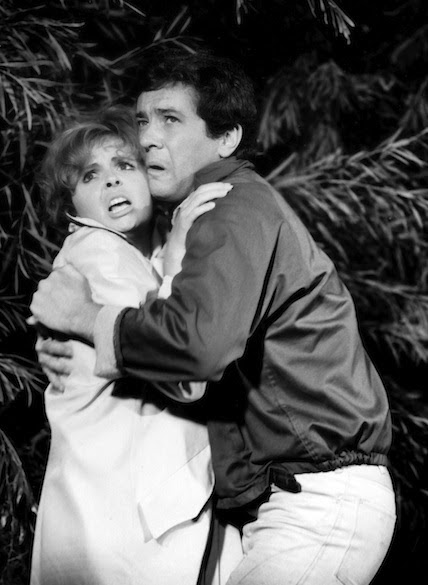 Now, this landmark film is back for new viewers to see in its original, groundbreaking Space-Vision 3-D on Blu-ray, restored from the original 35mm negatives by the 3-D Film Archive.

The Blu-ray edition of THE BUBBLE will become available on November 18, 2014, with a SRP of $34.95, presented in 3-D (requiring a 3-D player, television and glasses, but which will also display in 2-D on regular setups).

Bonus features include an essay by noted film preservationist Bob Furmanek, founder of the 3-D Film Archive; screenplay excerpts that detail deleted scenes from the film; trailers; a stills gallery; an alternate opening (presented in both 3-D and 2-D); and a restoration demonstration (presented in 3-D and 2-D).

The new 2k digital 3-D DCP restoration will also have its world premiere at the Museum of Modern Art’s “To Save and Project” festival in New York, with screenings on November 7 and November 9.

In addition to being a pioneering work in 3-D film production, THE BUBBLE is also a classic of the sci-fi genre. It tells the thrilling tale of a young couple who find themselves stranded in a most unusual town, one in which the populace exists in a kind of zombie-like state. They soon realize, to their horror, that the entire town is enclosed under a giant dome, with the people trapped like insects, and the young couple must make their escape before they too become permanently trapped in this strange place.

Now fully restored by the 3-D Film Archive, this Blu-ray edition will give classic movie buffs, genre fans and 3-D enthusiasts alike the chance to experience this sci-fi classic on their home entertainment systems in the way it was meant to be seen!