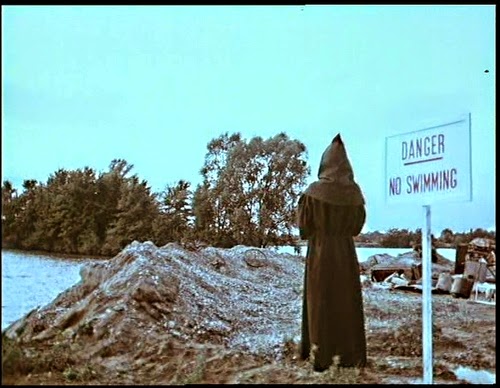 I’ve never looked at a puddle and thought, “Hmm, that is going to kill me” but in this Donald Pleasence-narrated British PSA, that’s exactly what is going on…death lurking around every body of water.

I don’t know what the statistics are of British kids drowning in a ditch while surrounded by a bunch of fully capable friends who could pull them out, but I do know something far more scarier than a lake, Dr. Samuel Loomis whispering in your ear how much he will enjoy killing you because you had the audacity to be a kid near water.

Good luck in getting young, impressionable children to take a bath after watching this, Central Office of Information.

And just so you know, after I watched this all I could hear in my head was this: I met him, fifteen years ago; I was told there was nothing left; no reason, no conscience, no understanding; and even the most rudimentary sense of life or death, of good or evil, right or wrong. I met this six-year-old child, with this blank, pale, emotionless face, and the blackest eyes… the devil’s eyes. I spent eight years trying to reach him, and then another seven trying to keep him locked up because I realized that what was living behind that boy’s eyes was purely and simply… evil.

In this article:Hilarious, Kids, PSA, Watch This