No, this is not a Spasm about Road House, but about my sentimental favorite substitute James Bond, Timothy Dalton, who made a strong debut as 007 in 1987’s The Living Daylights but has never really been shown quite enough love since. 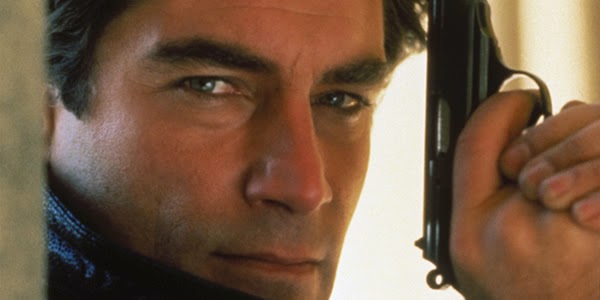 Most fans agree nobody does it better than Sean Connery and that current 007 Daniel Craig has reinvigorated the character with myriad and unexplored complexities, but Timothy Dalton came to us in the late 1980s like a jolt of electricity following a string of increasingly flaccid Roger Moore affairs.

Dalton, a respected Shakespearean actor, went back to the pages of Ian Fleming for inspiration and his interpretation took James Bond to shadier psychological places a good decade and a half before Jason Bourne and the rebooted Daniel Craig 007 films made it fashionable to do so.

Dalton’s tenure as Bond lasted for only two movies, which is a shame because he didn’t get an opportunity to make as lasting an impression as most of his counterparts.

His second and final outing is the uneven License to Kill, which bears all the scars and skid marks of a hastily assembled follow-up (see also: The Man with the Golden Gun, Tomorrow Never Dies and Quantum of Solace). One of Bond Mania’s biggest and most tantalizing “What If’s” is to ponder how a third Dalton film might have turned out.

Thankfully, Dalton’s debut “The Living Daylights” is a rousing if formulaic globe-trotting adventure in the classic Bond tradition, and Dalton owns the role of James Bond from the opening moments, taking the opportunity to reinforce it again and again throughout the movie. 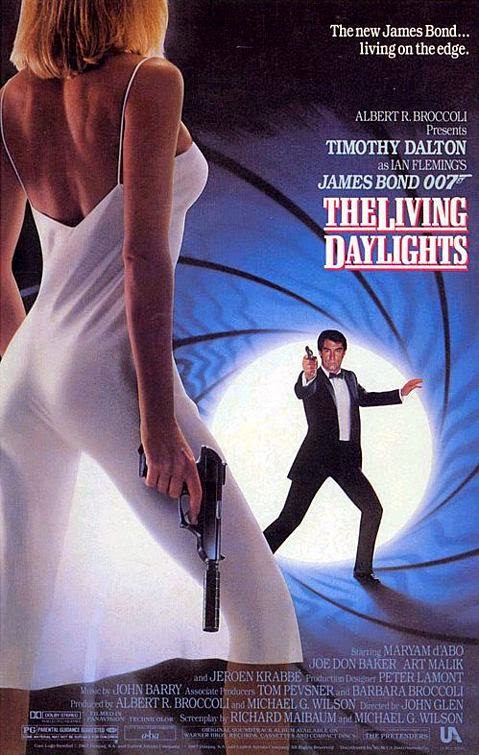 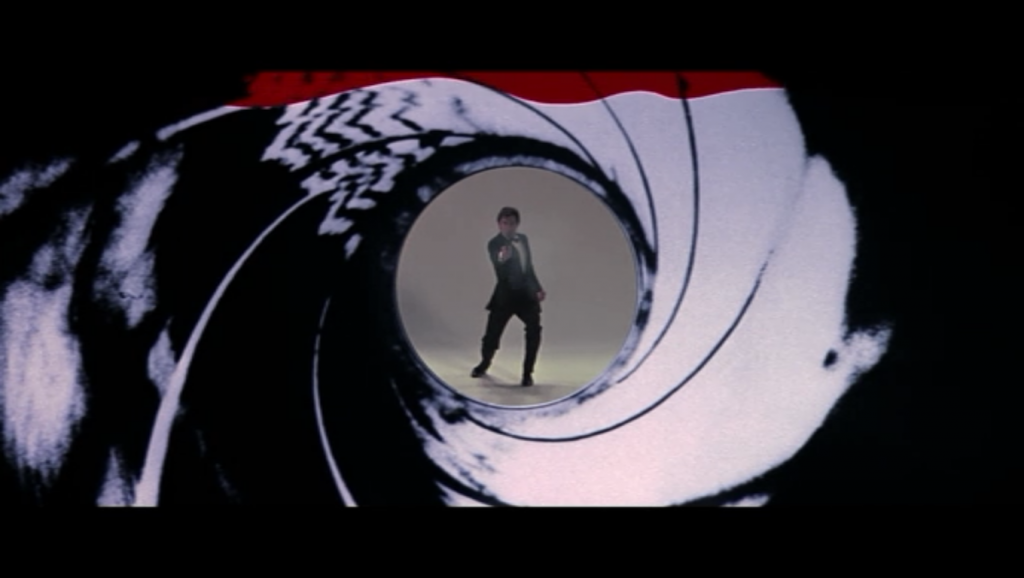 The Living Daylights features the last real traditional gun barrel intro in the James Bond series—it represents the peak of titles designer Maurice Binder’s talents and it is scored to perfection by the great maestro John Barry (this would be his final Bond movie).

From here on out, all the way up to Skyfall, the iconic gun barrel sequences are either re-orchestrated, augmented with a silly CGI bullet fired by Bond back into the barrel, relocated to kick off the title song, or tucked away as an outro at the end of the movie. We’ll know thirty seconds into Bond 24 whether or not Sam Mendes and company rectify this. 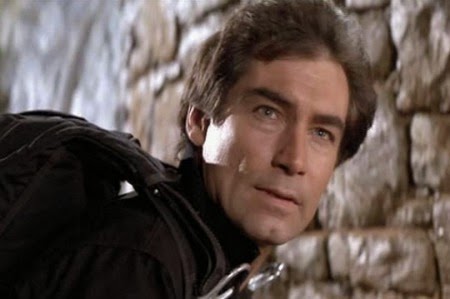 Meeting a new Bond for the first time is an important occasion. Sean Connery’s introduction as 007 in Dr. No is a classic bit that lives in cinematic infamy: Connery exudes effortless savoir faire as he snaps shut his cigarette lighter and utters—purrs—those three immortal words to the first of his many onscreen conquests. When introducing George Lazenby in On Her Majesty’s Secret Service, the filmmakers tease the audience with their new 007 model—Bond remains in the shadows for the first few moments, and we catch only fleeting glimpses of him, particularly of George’s distinct cleft chin as he lights a cigarette and takes a fresh puff.

It’s somewhat embarrassing to consider how little love and confidence the filmmakers seem to show towards Roger Moore early on, as they go out of their way to downplay his introduction in his first two outings—Bond doesn’t even appear in the intro sequence for his debut Live and Let Die, and a mere mannequin of him just barely pops up before the title song in The Man with the Golden Gun. It’s a night-and-day contrast to Dalton’s well-timed intro in The Living Daylights, punctuated with a windy dolly shot that is one of the film’s many signature images. Dalton doesn’t utter the famous phrase “Bond…James Bond” until the end of the teaser sequence, but first impressions are everything: he immediately owns the role with his commanding presence from this moment on.

For most of the pre-credits sequence on the Rock of Gibraltar, Dalton’s Bond is a silent man of action. His few lines of dialogue at the tail end of the intro are a cheeky nod towards Sean Connery’s telephone banter with Miss Moneypenny in From Russia with Love. Bond has escaped an exploding jeep mid-plummet and parachuted safely onto the yacht of a bored European beauty aching to meet a real man. He snatches her phone—“She’ll call you back”—and dials his superiors to report. “Exercise Control, this is 007. I’ll report in an hour…” 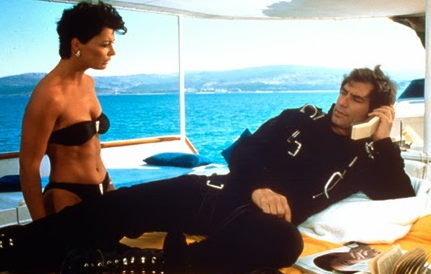 The European beauty is obviously pining, and she beckons Bond with a
raised glass of Champagne: “Won’t you…join me?”

Dalton replies with cool
confidence and the appropriate enthusiasm of a guy discovering the
juicy and unexpected perks of his new job: “Better make that two.”

In the first sequence of the film proper, we catch up with Bond mid-mission in Czechoslovakia as he dons sniper gear to cover a defecting Russian general. Bond’s assistant is an unctuous little twerp who quotes regulations and calls Bond “Old Man.”

Die-hard fans will recognize this nickname as yet another callback to From Russia with Love. Bond is loading his magazine and, upon hearing the phrase, we see Bond momentarily loose coordination—a reflexive response upon hearing that particular insult he’d remember all-too-well from his fateful meeting with Red Grant aboard the Orient Express. 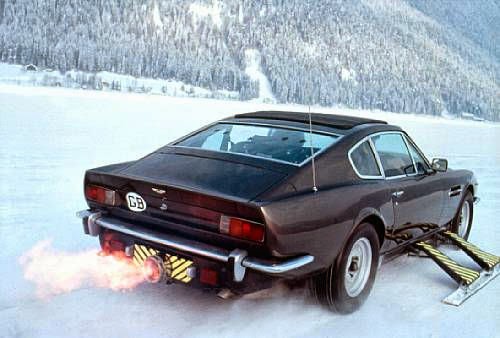 The star of the car chase scene is the winterized Aston Martin—and Dalton knows it, nicely underplaying the quips and maintaining a note of danger in his every word. Some fans argue Dalton underplays the humor a bit too much and that his 007 comes off as a stiff.

Others counter that he’s the most accurate embodiment of Ian Fleming’s character as written in the novels, which weren’t so humorous to begin with. The balance may be precarious, but Dalton acquits himself nicely.

Dalton nails a crucial serious moment, which occurs immediately after he sees a colleague get liquidated by a sliding glass door and then recognizes the killer’s calling card—there’s a look of utter raging in his steely eyes as he clutches the signature “Smiert Spionom” balloon and breaks it, and we sense here and now more than we ever did with Roger Moore’s cock of an eyebrow that Timothy Dalton’s James Bond is a very dangerous fellow. 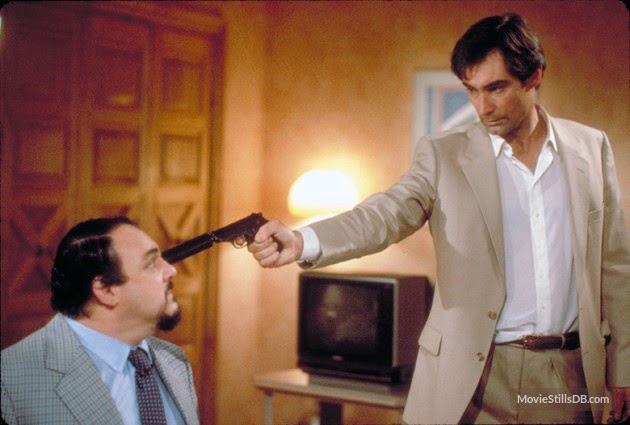 Bond’s confrontation with General Pushkin in Tangier is equally deadly serious, and our hero proves to be resourceful during improvised circumstances. Dalton’s every note is pure classic 007—how Bond stealthily enters the scene, how he coolly interrogates Pushkin and recognizes his silent alarm, how he stuns the bodyguard with a forcibly disrobed lady and then brutally whacks the living daylights out of him, how Bond treats the naked lady afterwards with a bit more chivalry by returning her torn blouse and shooing her off to safety, and how Bond and Pushkin arrive with much gravitas to the scene’s inevitable conclusion. After a string of tired Rogers, Dalton’s more ferocious take on the character reminds us that Bond is indeed licensed to kill.

Who says Dalton’s no good with the throwaway humor? There’s a terrific bit of silent and slightly chauvinistic comedy that happens as Bond is throttling a giant airplane down a runway during the climax. The Bond girl is speeding behind in a jeep, Bond catches view from the cockpit, but she cannot quite figure out Bond’s hand signals for her to drive the jeep up the taxiing airplane’s lowered tail ramp.

In Diamonds Are Forever, Sean Connery actually calls Bond Girl Tiffany Case a stupid twit to her face. Here, Dalton does it in a private expression of incredulity to himself, with a snap of his head and a roll of his eyes.