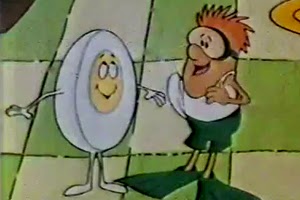 If you grew up in the 70s and 80s, you might remember the Bod Squad PSAs that would run during your Saturday morning cartoons which would try and educate you on choosing better snacks than Totinos Pizza Rolls. Of course, all they really did was give you enough time between Thundercats and Dungeons and Dragons to pour yourself another bowl of Sugar Smacks, but hey, at least they had catchy songs that have lasted the test of time…seriously, I can still sing Catman Struthers’ Nutty Gritty to this day without even realizing it…it’s my boredom song.

So let’s take a stroll down Memory Lane and revisit the days before children were all lard-asses and learn about how we shouldn’t murder our food with condiments in one of my favorite PSAs, Don’t Drown Your Food.

Unfortunately after all my Bod Squad education I still commit french fry homicide via ranch dressing…and frankly I don’t care.

And because I want you to start singing this as well, here’s Nitty Gritty…as well as a few others: