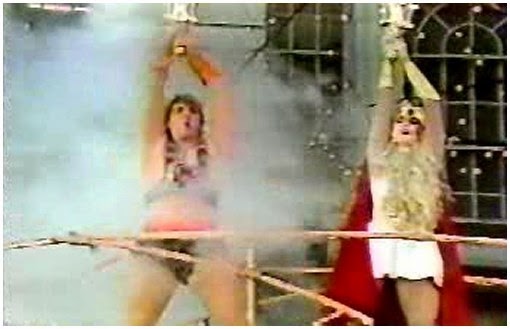 Back in 1985 a Masters of the Universe float was concocted to enchant children (and scare Pat Sajak) while simultaneously making it clear to parents that they should buy EVERY He-Man & She-Ra toy on the planet for their bastard offspring.

Hearing the annoying pleading from their hell-spawn, parents bought the testosterone-centric action figures by the droves, where in my neighborhood it was declared the Xmas/Hanukkah of He-Man! The buzz and subsequent Ch-Ching! of cash registers worked so well that they brought the float back again the next year with Dolph Lundgren (who was filming the live-action version of the cartoon at the time) to introduce it….with poor Pat Sajak once again.

Of course, we all know what happened after that movie opened…no more float.

For those of you who were old enough to remember the epic awesomeness that was The Masters of the Universe float, this may bring some tears to your eyes, if you are too young to understand how radical it was to open up a Skeletor action figure that had the revolving battle-scar armor thing-a-ma-jig on Xmas morning (or on one of the Hanukkah nights), go fuck yourself, this post is not for you.

In this article:80s, Holiday Special, Throwback Thursday, Watch This, WTF